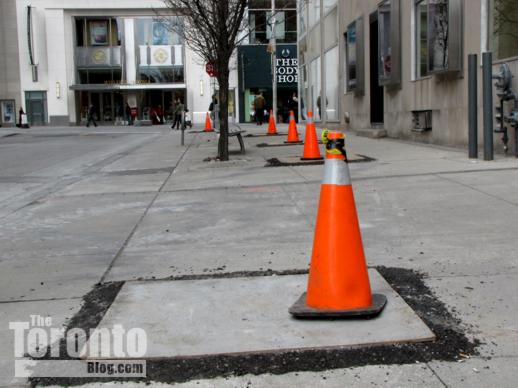 April 21 2011: Orange cones mark handwell replacement work on St Thomas Street, above, and along St Nicholas Street to the south (below)

Shocking but true: During the last decade, it’s been almost impossible to walk more than a few blocks in downtown Toronto without having to pass under scaffolding and alongside hoarding on sidewalks adjacent to building construction sites. And for most of the past three years, Yorkville-area pedestrians and shoppers have had to wind their way around construction activity as the Bloor Street Transformation Project gave the Mink Mile a major makeover. This year, there’s a new hazard for downtown walkers: crews cutting up sections of sidewalks to replace hydroelectric handwells in the pavement. Handwells are the metal plates that mark  access points for underground electrical service to streetlights, traffic lights, signs and other utilities.  Under certain conditions, these lids can become energized, transmitting shocks to pedestrians and animals that come in contact with them. In 2008 and 2009, at least two dogs died when they stepped on handwells and got electrocuted, while several people also received shocks, a February 2 2009 Toronto Star story reported. Last year, Toronto Hydro launched a handwell remediation program to replace the metal lids with non-conductive polymer concrete access panels. More than 15,000 handwells across the city are being inspected and replaced. The program is in full swing at the moment, and it’s common to encounter orange traffic cones and asphalt patches along downtown sidewalks where the panels are being changed. As if that’s not enough, sections of streets and sidewalks through Toronto are being dug up as the City launches its annual summer infrastructure construction program.  More than $130 million will be spent on maintenance and repairs to bridges, roads and sidewalks, along with sewer and watermain replacement. If you heading out for a walk, be sure to watch your step! 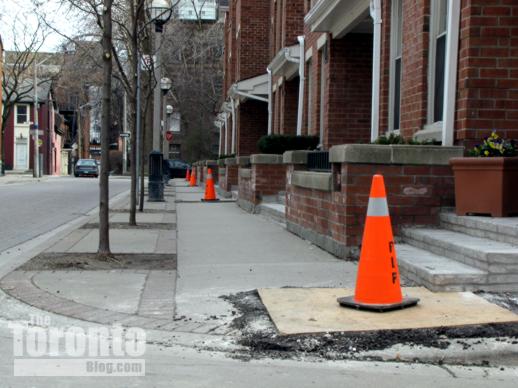