In remarks to an audience of several dozen people attending the CWNA meeting, Mr. Murray noted that he has been working for the past two years with local politicians, residents, community organizations and business groups on the Toronto Centre Plan, a project that aims to develop “community action plans” for his Toronto Centre riding, which encompasses downtown Wards 27 and 28 of the City of Toronto.  One of the project’s main goals, according to the Toronto Centre Plan website, is to “identify key pieces of Government of Ontario owned land that can be used for development of community spaces.”

Among these properties, Mr. Murray said, is 11 Wellesley Street West — a sizeable tract of vacant land on the block bounded by Yonge, Wellesley, Bay and Breadalbane Streets. As I reported in an April 21 2011 post, the provincial government in the late 1980s had originally designated the entire block for development of a new ballet/opera house designed by architect Moshe Safdie. However, a lingering recession led the then newly-elected NDP government to pull the plug on the project. Two highrises, the Allegro at Opera Place condos and The Bay Club rental apartments, were subsequently built along the Bay Street flank of the site. A skateboard park operated on part of the property for several years until the undeveloped section was closed off with hoarding in anticipation of construction of two additional rental buildings. No new buildings materialized, though, because a legal dispute arose between the developer and the province. Much to the chagrin of neighbourhood residents, the site has remained vacant and surrounded by unsightly scaffolding for years. But that could soon change.

Surplus asset for province to turn over to city or Ryerson

Mr. Murray said the province is looking into the possibility of declaring 11 Wellesley as a surplus Crown asset, and making it available to the city to acquire for use as public realm parkland or open space. One option for turning the property over to the community, he said, is for the government to declare the land a part of Ryerson University, effectively extending the university’s campus several blocks to the northwest of its present downtown location.  Ward 27 Councillor Kristyn Wong-Tam, who also addressed the CWNA meeting, said she is excited that the city might get the opportunity to acquire the Wellesley street site for a new park.

Mr. Murray added that other new parks could be in the works for the downtown core, since the Ontario government owns approximately 110 acres of property south of Bloor Street. Some of that land is located along Jarvis Street, he said.

The Cabinet minister didn’t indicate when the Wellesley property might become available to the City, but his comments have been the most promising indication to date that the province is taking active steps to help Toronto develop additional community and green spaces that its downtown core desperately needs. Mr. Murray told the CWNA meeting that when he lived in downtown Toronto more than 20 years ago (prior to relocating to Winnipeg, where he served as Mayor from 1998 to 2004), he enjoyed the tree-lined streets and ample open spaces. But when he returned to the city in 2004, he was shocked and disappointed to see that new parks, green space and community facilities had not been created in lockstep with the extensive highrise development that was taking place throughout the downtown core. He said considerable work remains to be done to begin changing the deficiency in community spaces, but he seemed optimistic that progress will be visible within the next several years.

Below are photos I shot today, showing several different views of the 11 Wellesley site. 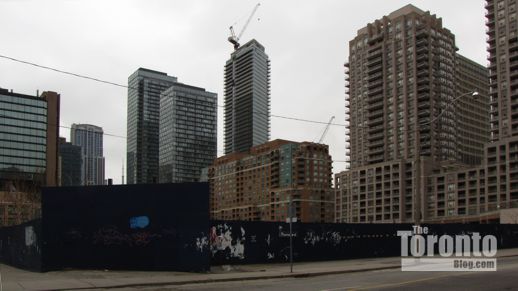 A view from Wellesley Street of the hoarding that surrounds the vacant land at 11 Wellesley West. The 50-storey Burano condo tower (center rear) is nearing completion just a block and a half to the southwest. 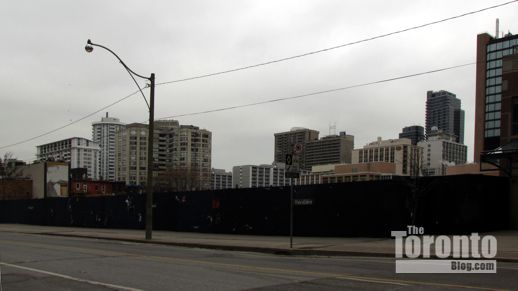 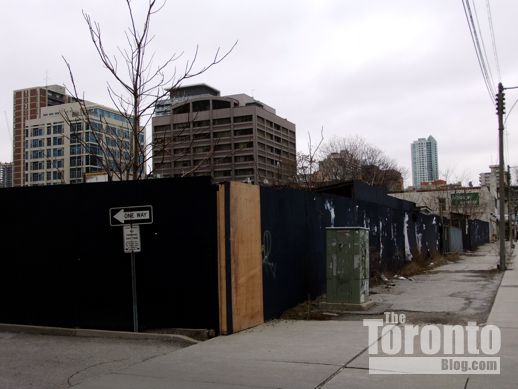 Hoarding at the southwest corner of the 11 Wellesley site, on Breadalbane Street. The buildings visible at upper left, at the intersection of Yonge & Wellesley Streets, originally were offices. They later were converted into condos. 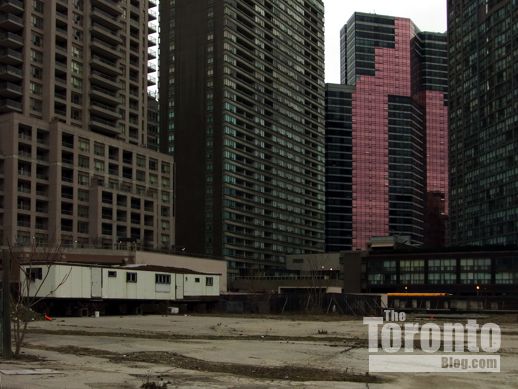 A northwest view, from Breadalbane Street, across the vacant property at 11 Wellesley West. The nearby towers are, from left: The Bay Club rental apartments at 925 Bay Street; Sutton Place Hotel at 955 Bay Street; The Strasscorp condos at 1001 Bay Street; and the Century Plaza condos at 24 Wellesley Street West. 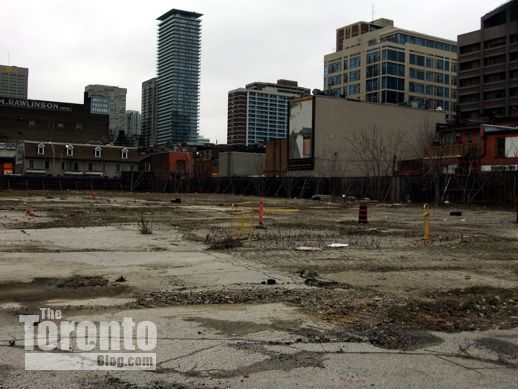 Northeasterly view of the potential park site, also from Breadalbane Street. The 46-storey Casa condominium on Charles Street East is the tower at center rear. 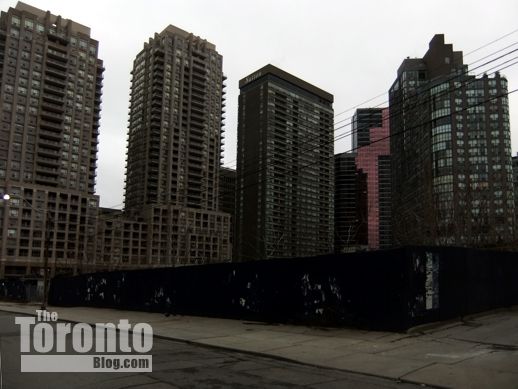 View from the corner of Breadalbane Street and Saint Luke Lane