I noticed the elaborate facade for the store while walking through the Entertainment District on Monday. I thought it might be a new sales centre for a condo project proposed for the site, and I overheard other pedestrians commenting that the low-rise structure “must be another condo model suite.” Turns out the place was being set up for something different altogether.

As explained in a story published in the Toronto Star today, “pop-up shops are typically barebone spaces with just racks of clothes. But this one redefined the concept with plush carpeting, chandeliers, windows painted to look like a stately mansion, and a VIP area with patent white sofas where an English bull terrier — Bullseye, the Target mascot — and the designer himself held court.”

The pop-up store’s corner location is practically next door to the 35-storey M5V Condominiums tower, which opened for occupancy last year. (The sales presentation centre for M5V actually had been located in the very same pop-up store space.) Immediately to its south is the site where construction is expected to commence this year on the 41-storey Bisha Hotel and Residences tower. And only a short block to the west is Charlie Condos, a 36-storey tower whose construction progress I profiled in another post published today.

The store’s site itself has been targetted for yet another condo tower. Great Gulf Homes has proposed building a 40-storey tower with 242 residential units, street-level retail space, and 6 levels of underground parking. Designed by Quadrangle Architects, the tower has been panned by city planners, who have called Great Gulf’s project “over-development of the property contrary to the planning framework for King-Spadina.”

As the planners explain in an August 22 2011 background report, the site “is too small to accommodate the proposed tower. The building creates negative impacts on abutting properties that affects their use and enjoyment and does not comply with the City’s Design Criteria for the Review of Tall Buildings Proposals. Its approval would set a negative precedent for future development that undermines the vision for this area of the City.” The application was appealed to the Ontario Municipal Board, where a hearing apparently was held in January. No decision has yet been released, but word on the street is that Great Gulf will be launching sales for the new project this spring, possibly as early as April. In the meantime, I’ll keep watching to see if Great Gulf does open a sales centre in the space.

Below are two more photos of the Target pop-up store exterior, as well as two photos showing how the building looked just after the sales centre for M5V Condominiums closed up. 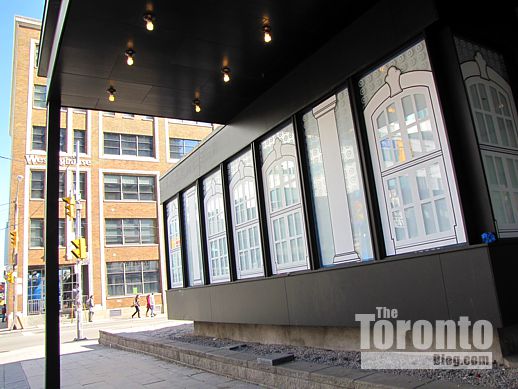 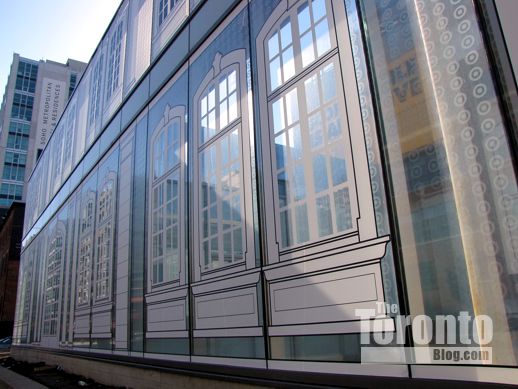 February 20 201: The illustrations etched onto the windows suggest an elegant mansion or manor, rather than a discount fashion store 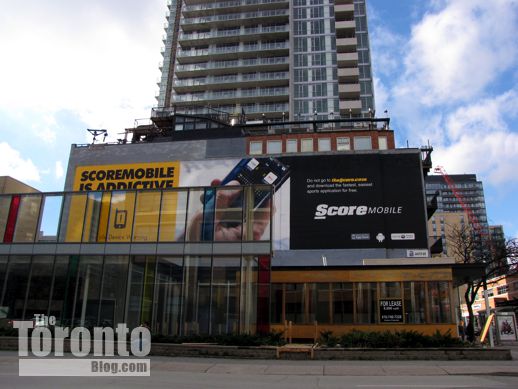 November 23 2010: A view of how the pop-up store building exterior looked while it was the sales presentation centre for the M5V Condominiums tower, seen while under construction just a stone’s throw away. 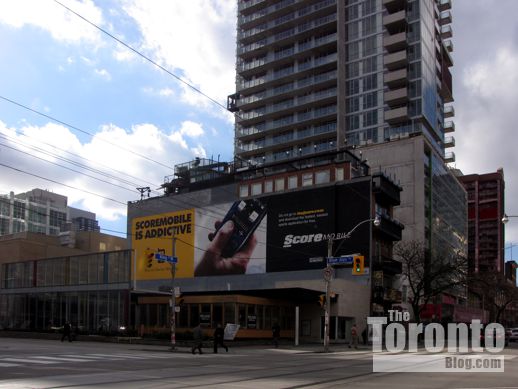 November 23 2012: Another view of M5V Condominiums and its former sales centre, from the northeast corner of King and Peter Streets.