London on the Esplanade condos | www.TheTorontoBlog.com 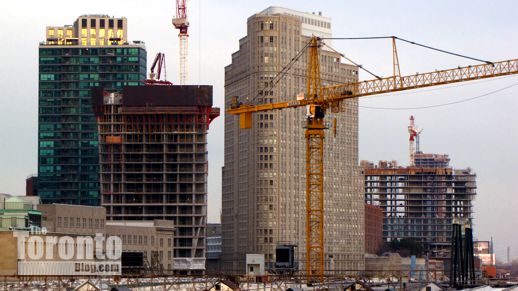 Rising in the east: Construction cranes and condo towers old & new dominate the southeast downtown skyline, seen here from the south building of the Metro Toronto Convention Centre on January 6 2012.  From left are: the green-windowed west tower of London on the Esplanade Condos, completed in 2010; The L Tower, a Daniel Libeskind-designed condo more than one-third of the way to its ultimate height of 57 floors; the 33-storey wedge-shaped condo tower at 25 The Esplanade, constructed 14 years ago; the 25-storey Market Wharf condo tower rising on Lower Jarvis Street; and, climbing skyward in the distance behind Market Wharf, the 40-storey Clear Spirit condo tower in the Distillery District. The yellow crane in the foreground is working on the $640 million Union Station Revitalization project.