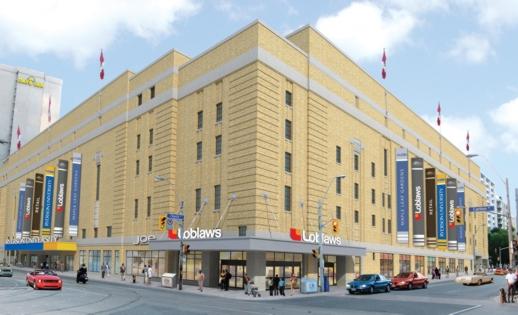 Landmark lives on: From the outside, there have been few signs that the iconic Maple Leaf Gardens hockey shrine is gradually being transformed into a multipurpose facility housing a giant grocery store and a university athletic centre. Last fall, scaffolding and green safety nets shrouded the east and south facades during brickwork and window replacement activity. For the past two months, crews have been busy working on utilities beneath the Carlton Street sidewalk and Church Street pavement at the southeast corner of the building. Over the same period, teams have been doing some roofing work atop the arena’s famous white dome. And the past two weeks, workers have been chiselling brickwork from a section of wall on the north side of the Gardens, along Wood Street.  None of the work gives any indication that the storied, historic Gardens soon will be living a renewed life as a modern retail and recreation facility.

However, it’s a different story altogether if you get to peek inside the loading door at the northeast corner of the building whenever a cement or construction supply truck comes out or goes in. Over the past six months, I’ve had that opportunity a handful of times, managing to catch quick glimpses of the cavernous construction zone that’s largely hidden from public view. Unfortunately, I’ve never had my camera with me, so I haven’t been able to track the interior construction progress in photos. In November, I got a brief look inside while the construction workers were on their morning break. With beams of light streaming through the narrow, small windows on the Gardens’ upper walls, the dusty interior had an eerie, haunting atmosphere. The building was just a gigantic brick shell; the inside had been gutted, and the ground was being dug out to create an underground parking garage. I couldn’t see anything holding up the huge walls and vast domed roof, but assume there must have been some kind of support for all that weight. The last few times I peeked inside, it appeared that excavation work was nearly complete; meanwhile, forms several storeys tall were being assembled so concrete could be poured to build walls and floors for the 70,000-square-foot Loblaw supermarket that will occupy the ground level of the “new” Gardens. Just last week I got another look, and it seemed obvious there is an incredible amount of work still to be done to create the upper levels that will house the 150,000-square-foot Ryerson University Sports and Recreation Centre.

The Centre is a $60 million project for which the federal government is contributing $20 million under the Canada Infrastructure Stimulus Fund (the university and Loblaws are responsible for the rest). However, projects that qualify for stimulus funding must be completed by March 31 of this year — and there is clearly no way on earth the Maple Leaf Gardens transformation will be done in time. Certainly looks like an extension or exemption will be required here. I’m anxious to see work start on the building exterior — the installation of street-level windows for the supermarket, the pedestrian entrances to the two separate facilities, and of course the vehicle entrance to the underground lot. Project details are provided in a Ryerson University press release available at this link. The complexities of the Maple Leaf Gardens transformation are outlined in this article from the Daily Commercial News and Construction Record, while seven construction photos by The Globe and Mail‘s Fred Lum can be viewed at this link on the Globe website. Below are some of my photos of the Gardens exterior at different times over the past several years. 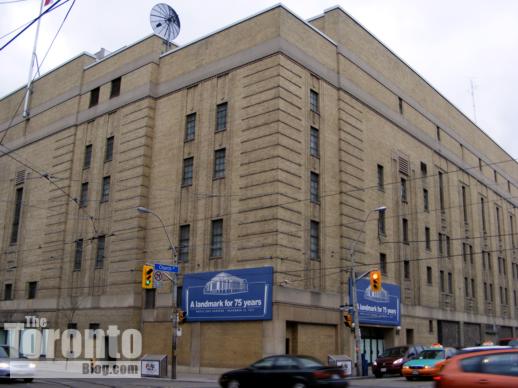 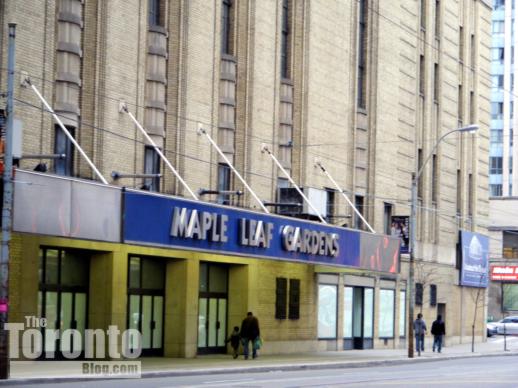 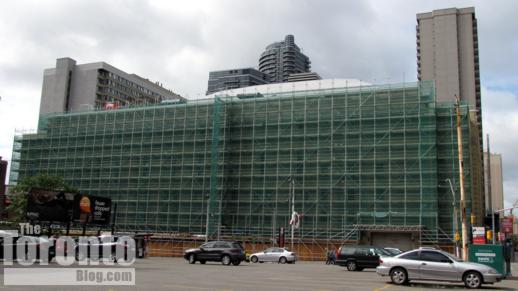 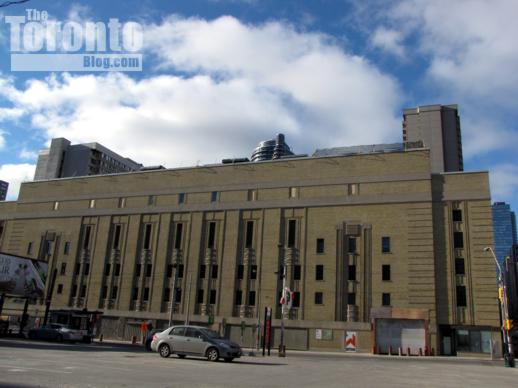 Scaffolding was removed from the east wall in early December 2010 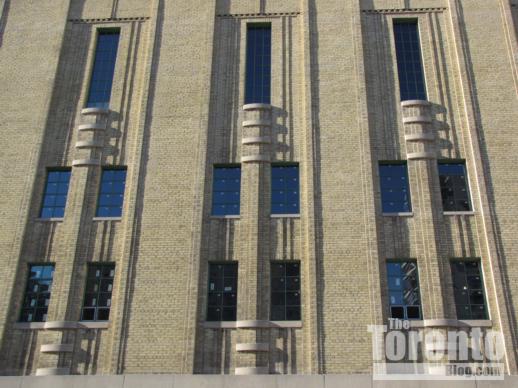 New windows in the east wall along Church Street 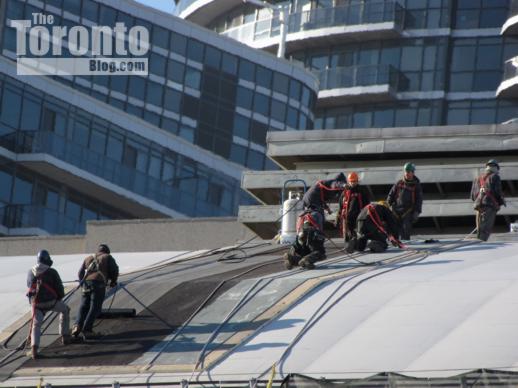 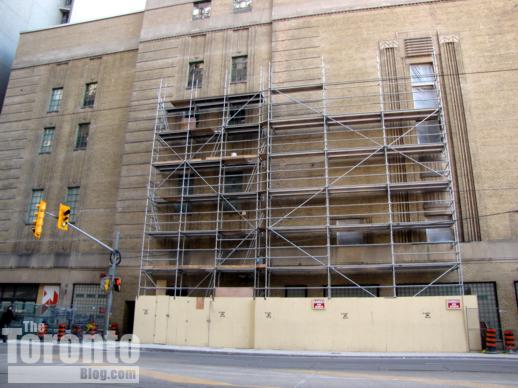 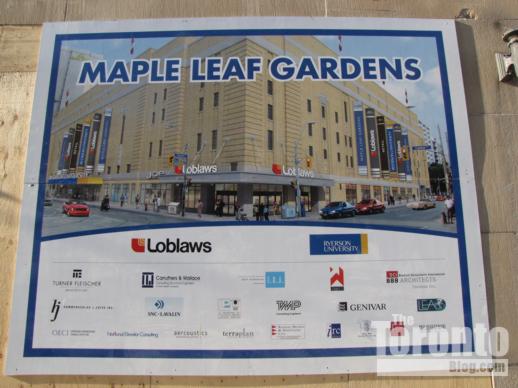 Ryerson University and Loblaws sign on the Church Street wall 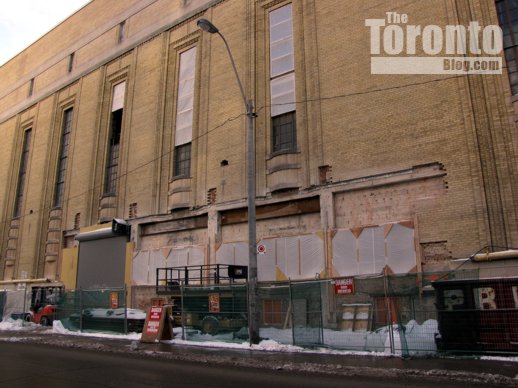 Brick removal from the Wood Street wall on January 14 2011 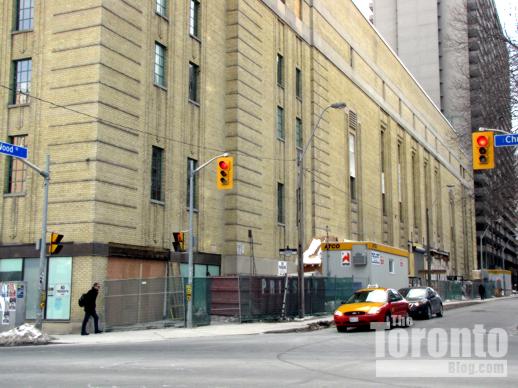 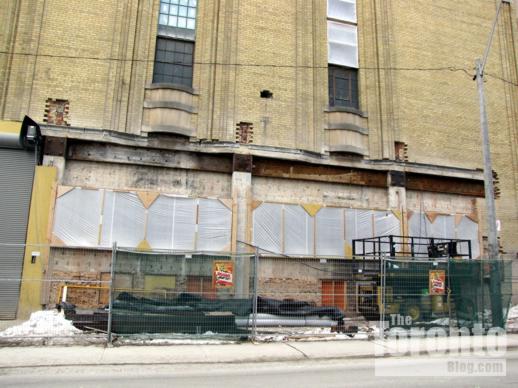 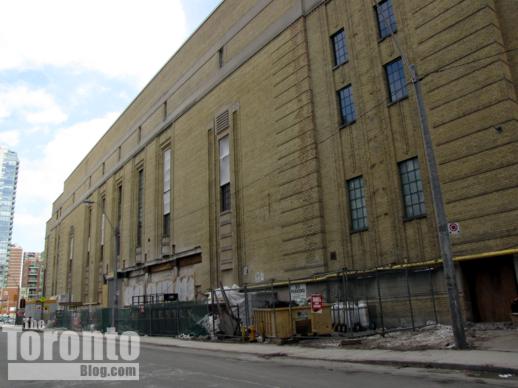