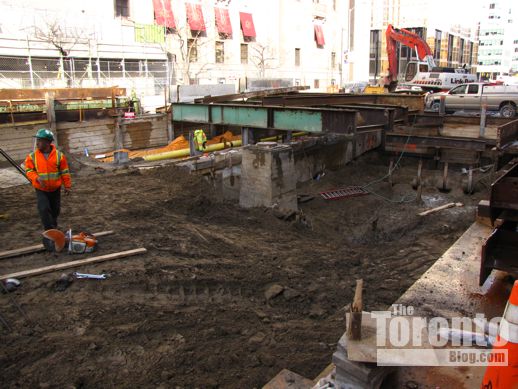 January 31 2012:  Subway platform construction activity on Front Street between the Royal York Hotel and Union Station. Weekend service on part of the Yonge-University-Spadina line was disrupted after tracks at the Union subway station got flooded when construction crews accidentally ruptured a water main.

Soggy station: For the past year, construction of a new platform and concourse at the Union subway station — along with major revitalization work at Toronto’s historic Union Station building — has inconvenienced mainly motorists and pedestrians, thanks to minor detours around various different building zones on sections of Front and Bay Streets. This weekend, however, thousands of subway users had their travel plans disrupted when the Union subway stop was flooded after construction crews accidentally severed a water main.