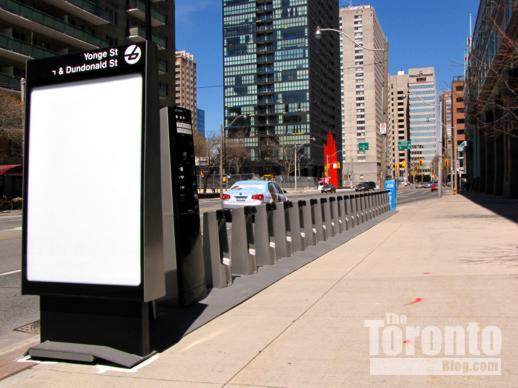 Big oops!: Things could get off to a confusing start four tourists and even many city residents when Toronto’s new BIXI public bike system launches on Tuesday. The sign on the bike rental station installed this week at the northeast corner of Jarvis and Isabella Streets is mislabelled as “Yonge St & Dundonald St,” which is actually four blocks away to the southwest. I didn’t have time to hike over to Yonge & Dundonald today to see if the station there is marked “Jarvis St & Isabella St” or something else, but can only presume that at least one other station has been installed in the wrong place. Hopefully they will get the station signs sorted out before Tuesday … as well as their website map that indicates rental station locations. Neither the Jarvis & Isabella nor the Yonge & Dundonald stations appear on the map, nor do any of the other dozen BIXI stations I saw while walking around downtown today.