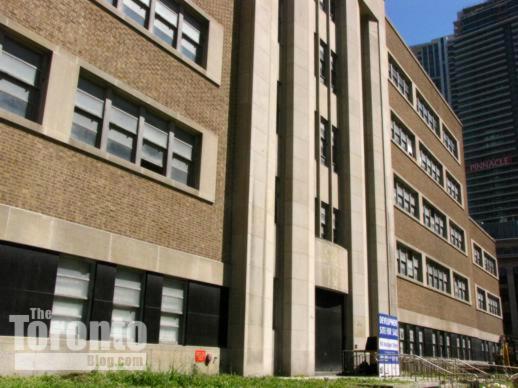 July 1 2011: Constructed in 1953 as the Ontario Workmen’s Compensation Board Building, 90 Harbour Street was headquarters for the Ontario Provincial Police from 1975 to 1989. It has been vacant since then, apart from occasional short-term occupation for film productions. 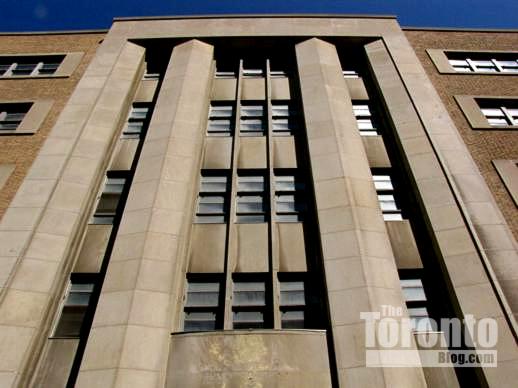 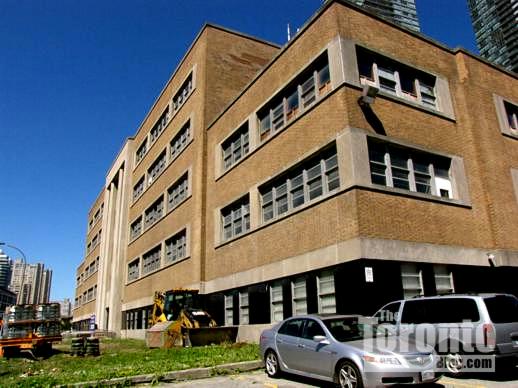 The building’s first floor base is clad in polished black granite, while the upper floors are clad in buff brick. The window trim is limestone. 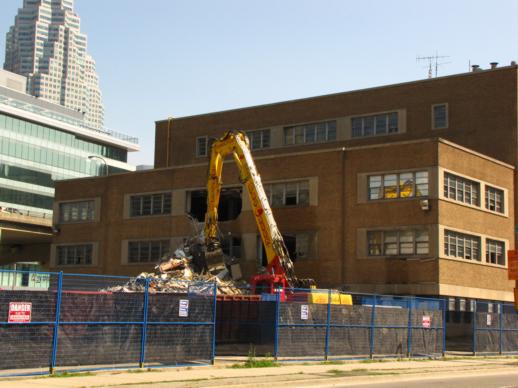 July 17 2011: Demolition of the building’s west wing gets underway 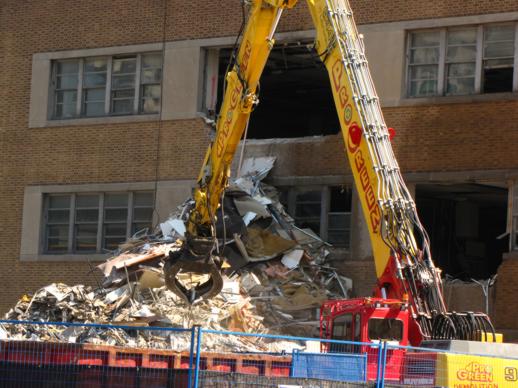 July 17 2011:  A mound of rubble beneath two holes smashed in the west wall

Prime location: A 2.5-acre piece of property being touted as one of the last major development sites available in downtown Toronto is up for grabs near Harbourfront.

The Ontario Realty Corporation is selling 90 Harbour Street, a building originally constructed in 1953 as offices for the Ontario Workmen’s Compensation Board and subsequently used as headquarters for the Ontario Provincial Police. With frontage on Lake Shore Boulevard, York Street and Harbour Street, the five-storey structure occupies a prime piece of real estate in an area currently experiencing a massive building boom.

Just a short walk from Union Station, 90 Harbour is situated directly across Lake Shore Blvd. from the recently completed Maple Leaf Square office, condo, hotel, retail, and restaurant development. It also sits kitty-corner to York Centre, where four condo towers are currently under construction for two different building projects: ÏCE Condominiums and Infinity3 Condominiums. Immediately to the north of those is the Southcore Financial Centre, where the 26-storey PwC office tower at 18 York Street is nearing completion and where construction has commenced on two more highrise buildings: the 30-storey Bremner Tower and the 45-storey Delta Toronto hotel tower. And just south of 90 Harbour, a 30-storey office building has been proposed as Phase III of Waterpark Place across the street.

When I passed by 90 Harbour at the beginning of this month, Ontario Realty Corporation “for sale” signs were posted at several places on the property, but public parking lots were still operating on the east and west sides of the building. When I passed by this afternoon the signs were gone, the entire property was surrounded by blue security fencing, and a Progreen Demolition machine was working next to a large mound of rubble on the west side of the building, beneath two large holes that had been smashed into the brown brick wall.

The demolition work will disappoint any city heritage buffs who may have been hoping that the building might be retained as part of any new development project. The City of Toronto had intended to designate 90 Harbour as a heritage building several years ago because of its “cultural heritage value” as “a representative example of a mid-20th Century office building that blends features of the three prevalent styles of the period.” As a “reasons for listing” document explained: “While the symmetry, cladding and profile reflect Modern Classical styling, the stepped plan and vertical elements recall Art Deco and the band windows are identified with the Art Moderne. All three styles were introduced in the 1920s and remained popular until the International Style or Modern Movement gained acceptance in the 1960s.” However, the City could not proceed with the heritage designation because it did not have authority, under Ontario law, to impose such a designation on provincial government property. The City subsequently withdrew its notice of intention to designate, and issued a demolition permit on February 14 2011.

So what’s in store for 90 Harbour? I wasn’t able to find out today if any parts of the facade or other building elements will be saved, or if the building will be demolished completely. However, the ad on the Ontario Realty Corporation website does state that “Proposed development scenarios and designs have continued to retain heritage elements of the existing structure.” The website also points out that the property has “excellent” potential for commercial and residential development and is bound to “build off the success of established and proposed commercial and residential developments along the Harbourfront” as well as the new “office and residential projects immediately to the north.” I will follow up once I learn of any development plans for the site.

Below is an aerial photo that appears on the Ontario Realty Corporation website flyer for 90 Harbour, showing the property’s location in downtown Toronto, along with some of my own recent photos of the building. 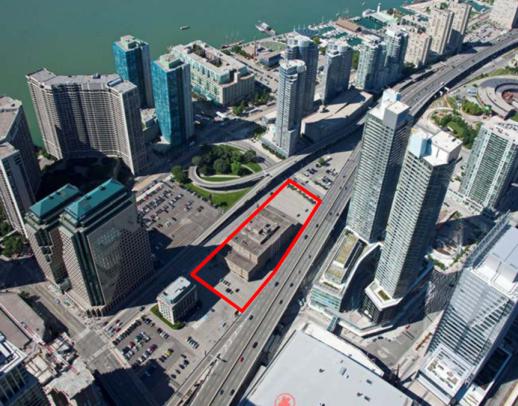 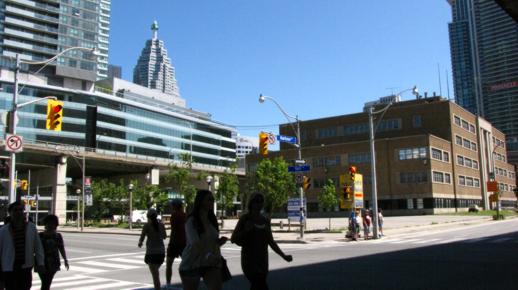 July 1 2011: 90 Harbour Street seen from the intersection of York Street and Lake Shore Boulevard, looking to the northeast 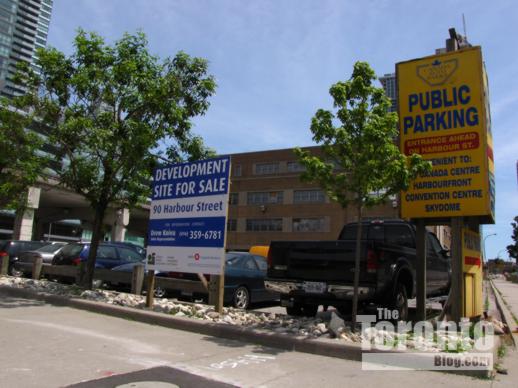 June 22 2011: A for sale sign posted outside the property on York Street 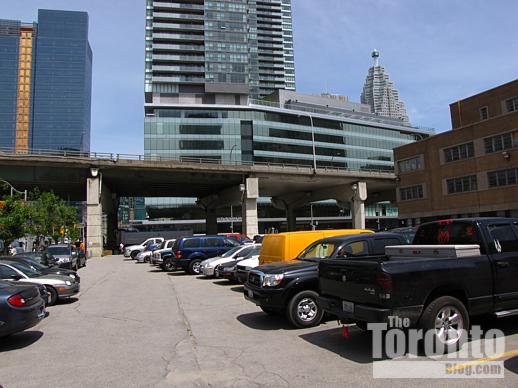 June 22 2011: Looking north from the parking lot on the west side of 90 Harbour Street toward the PwC office tower at 18 York Street (left) and the Maple Leaf Square condo/office/retail/restaurant/hotel development 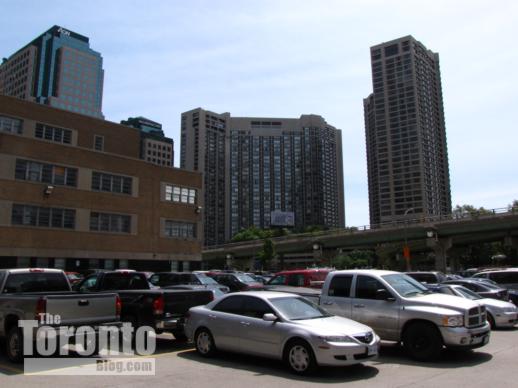 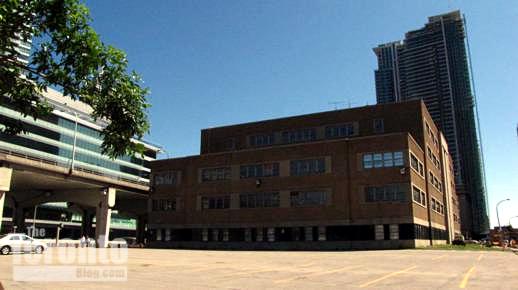 July 1 2011: 90 Harbour viewed from York Street, looking east. The two condos in the background are the Pinnacle Success Tower and the 33 Bay Residences at the Pinnacle Centre, both on Harbour between Bay and Yonge Streets. 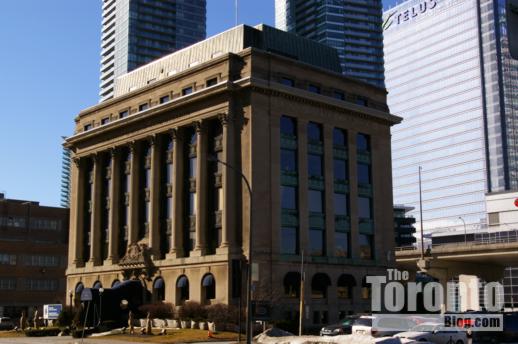 February 18 2011: The Toronto Harbour Commission building at 60 Harbour Street on the east side of 90 Harbour 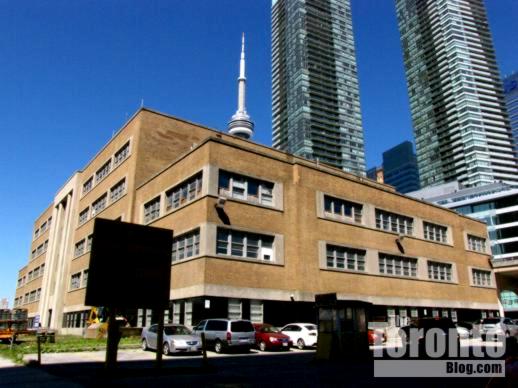 July 1 2011: The CN Tower and Maple Leaf Square condo towers rise behind 90 Harbour, viewed here from the parking lot on the east side of the building 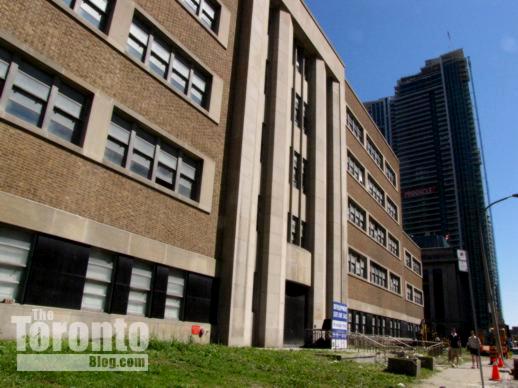 July 1 2011: Looking east along the front facade of 90 Harbour Street 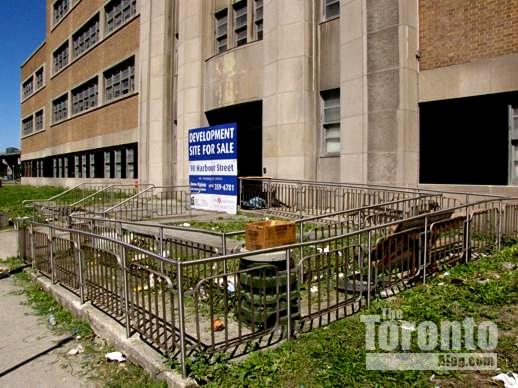 July 1 2011: The dilapidated condition of the front lawn and wheelchair entrance created an eyesore outside an otherwise attractive building 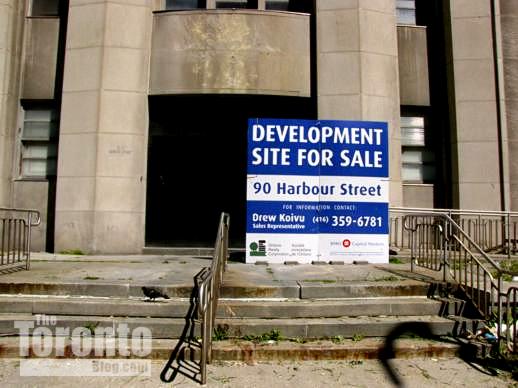 July 1 2011: A “for sale” sign outside the building’s former main entrance 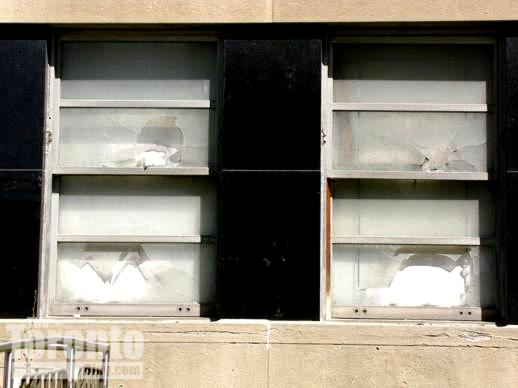 July 1 2011: Broken windows on the front facade of 90 Harbour Street 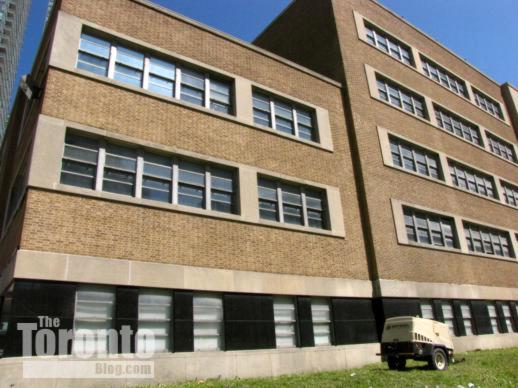 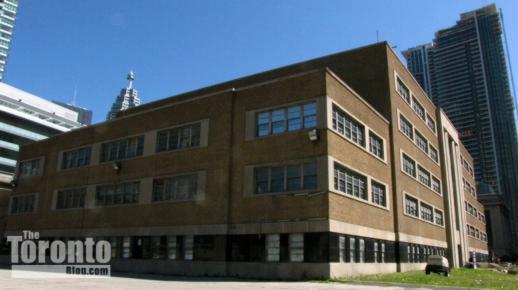 July 1 2011: A view of the west wing from the Harbour Street sidewalk 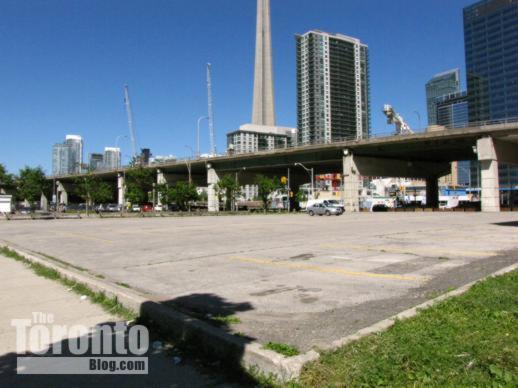 July 1 2011: Looking toward the CN Tower from the west parking lot 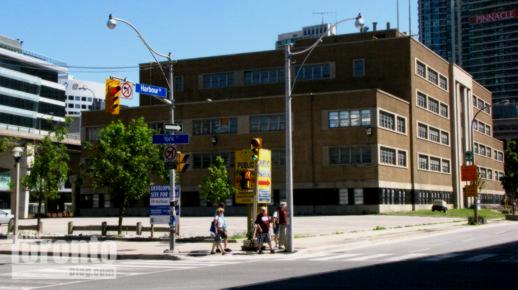 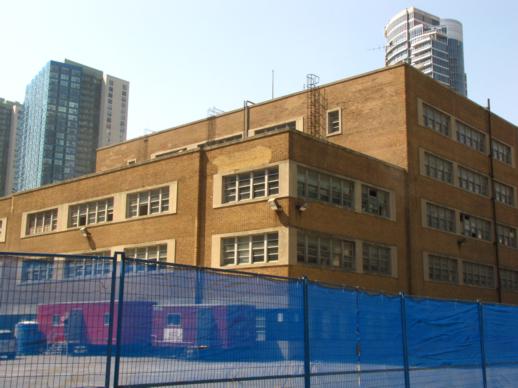 July 17 2011: Security fencing along the northeast perimeter of the property 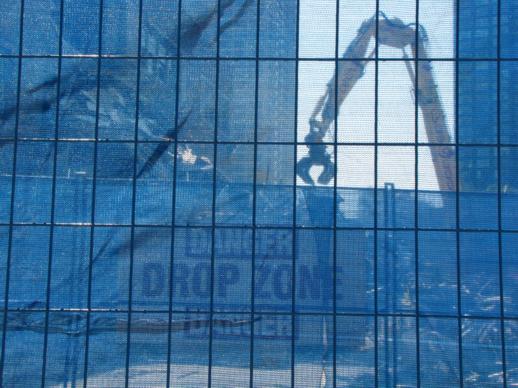 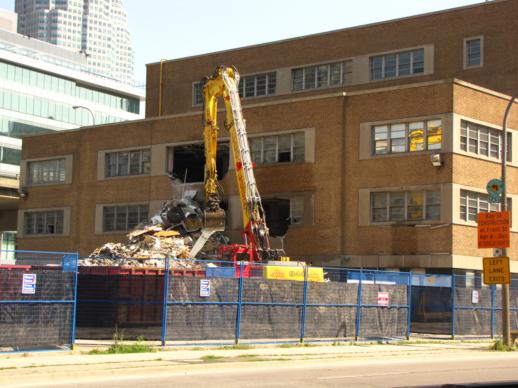 July 17 2011: Demolition machine working beside the west wing of 90 Harbour 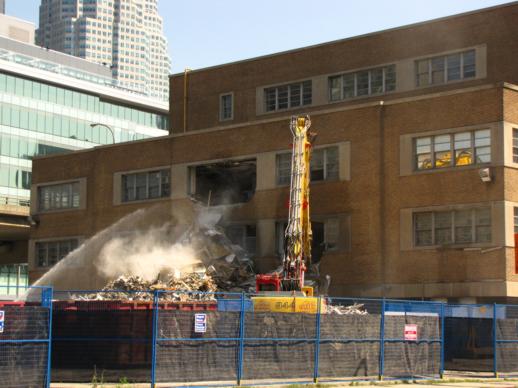 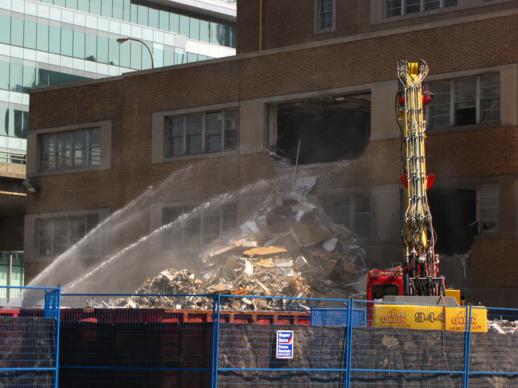 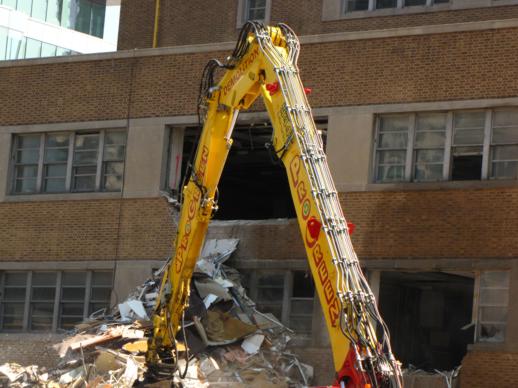 July 17 2011: Only one demolition machine was working on the site today 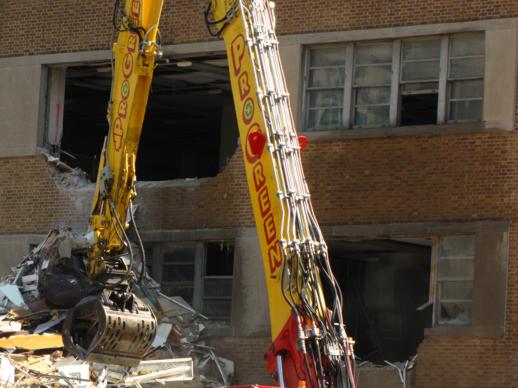 July 17 2011: A closer look at the two gaping holes in the wall of the west wing