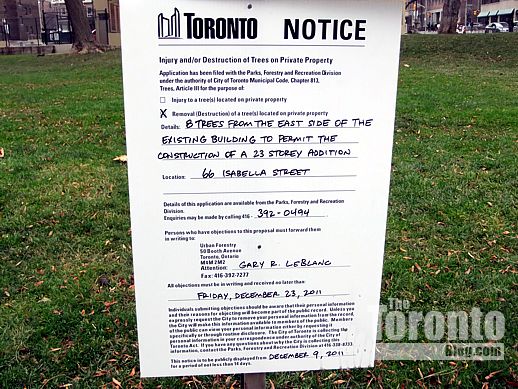 December 14 2011: This city notice, posted on the grounds of the 40-year-old rental apartment tower at 66 Isabella Street several days ago … 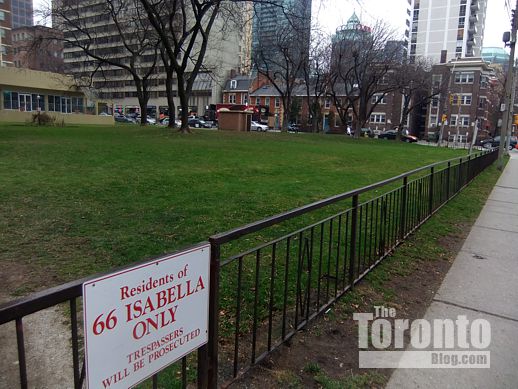 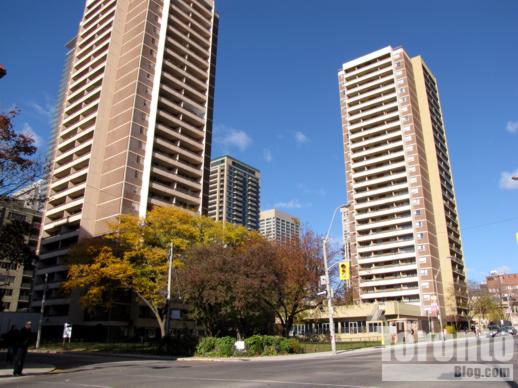 Kiss the trees goodbye?: Church-Wellesley area residents are alarmed that the city appears poised to approve construction of a 23-storey addition to a rental apartment tower at the northwest corner of Church and Isabella Streets. Neighbours are upset not only since the construction will destroy eight mature trees and eliminate a large open green space in a downtown area that city planning staff admit is severely lacking in parkland, but also because they worry that the condo and rental unit addition to the 66 Isabella Street apartment tower could spark a wave of highrise development proposals for low-rise residential streets in the nearby Church & Wellesley village. And they fear for the fate of elderly tenants who will be displaced from their apartments on the east side of the apartment building, where suite layouts will have to be drastically reconfigured to accommodate hallways linking the addition to the existing structure.

The application for zoning amendments to allow construction of a highrise addition to 66 Isabella Street was filed with the city in late September 2010. Originally (and as I reported in a March 19 2011 post), the applicant proposed a 32-storey addition that would rise 95 meters (including mechanical penthouse), standing significantly taller than the 26-storey building to which it would be attached. The new wing would feature a 4-storey podium facing Isabella Street, with a 28-storey tower soaring above, with stepbacks at the 5th, 17th and 27th floors. The addition would include four condominium townhouses overlooking Isabella Street, 12 condominium suites on the top two floors of the tower, and retail stores along the Church Street flank of the complex. By adding 212 new suites, the addition would effectively more than double the number of residential units in the building. Most notably, the development would replace a large tree-shaded private yard which extends above the apartment building’s two levels of underground parking.

Although the lawn is private property, and signs advise that the yard is for the exclusive use of 66 Isabella residents only, people living, working and passing through the neighbourhood have long enjoyed its presence, particularly for its calm, cooling summer greenery and colourful fall foliage. But the greenery could be gone within weeks: a city notice was posted on the property last weekend, advising that an application to destroy the trees “to permit the construction of  a 23 storey addition” has been filed.

Though it now appears that the property developer has reduced the height of the proposed addition by 9 storeys, area residents remain dismayed at the prospect of any kind of development on the corner, and are disappointed by indications that the project will get the go-ahead from City Hall.

At a public meeting of the Church Wellesley Neighbourhood Association (CWNA) at the 519 Church Street Community Centre on Monday night, several area residents pleaded for people to strenuously oppose the proposal when it goes before the Toronto East York Community Council (TEYCC) for a statutory public meeting, which one Church Street resident said he has been told will take place on January 10. A man who identified himself as Morley urged the neighbourhood association to do whatever it can to “try to get [the project] killed.” If approved by the city, the addition to 66 Isabella will not only “kill the green space and stick a big huge block of building” in its place, he said, but will in turn spur further highrise development that will ruin “the character of the neighbourhood.”

Another resident, who said he lives in the 48-unit Church-Isabella Co-Op across Church Street from the development site, said he has spoken to local City Councillor Kristyn Wong-Tam about the project, and is disappointed she isn’t supporting residents who object to the addition. He acknowledged, however, that the city desperately needs additional new rental accommodation, like the units proposed for the 66 Isabella addition, and said the project appears likely to get the nod from TEYCC no matter how strongly neighbourhood residents object. A woman told the meeting she was concerned for the welfare of senior citizens who have lived in apartments on the east side of 66 Isabella for decades, but will be forced to find new accommodation when construction commences. While several people at the meeting said they think losing the green space will be regrettable, they did concur with one man who said “we’re not anti-development, but we’re against development that takes away from the neighbourhood.”

As city planners noted in a November 15 2010 preliminary report, the original proposal for the tower addition offered to replace the 1,778 square meter (19,000 square feet) of ground-level green space with a 1,378 square meter (14,833 square foot) outdoor amenity area “on the private roof of the 4-storey podium and at the rear of the building at grade level.” It looks like area residents will have to wait until construction is complete in several years’ time to decide whether the building addition and its new amenity space adds to or takes away from the neighbourhood.