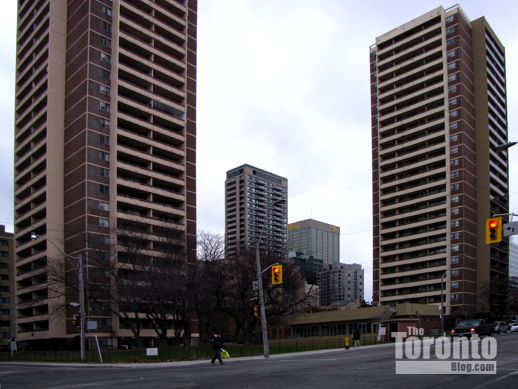 January 5 2012: Neighbourhood residents are planning to gather Saturday at this private green space on the northwest corner of Church and Isabella Streets to protest a proposal to build a 23-storey residential tower on the site 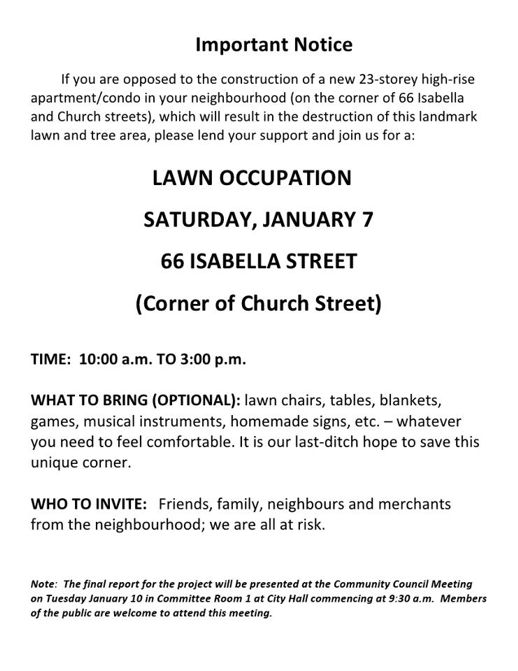 Occupy Isabella: Following on the heels of last autumn’s Occupy movement, a group of downtown residents is planning to gather at the northwest corner of Church and Isabella Streets for five hours on Saturday to protest a developer’s plans to construct a 23-storey residential highrise on the site.

As I reported in a December 14 2011 post, some residents in the Church-Wellesley area are angry that the city appears set to approve construction of a highrise addition to the 40-year-old apartment building at 66 Isabella Street. The addition — which would include 199 rental units plus 12 condominium suites in a 19-storey tower rising from a 4-storey podium — would be built on a 1,778-square-meter piece of property where a lawn and eight mature shade trees provide a private “park” atop the apartment building’s two-level underground parking garage. People in the neighbourhood are dismayed by the tower proposal because it would eliminate a sizeable, treasured green space in an area that city planners and politicians admit is sorely lacking in adequate public parkland.

“At present the lawn represents ‘green therapy’ for a wide community from as far away as Sherbourne Street and Bloor. Neighbourhood residents frequently choose to pass this corner on their way to and from work in order to enjoy the last bit of green space in an otherwise sterile landscape of steel, glass and pavement,” explains a notice posted on the Church Wellesley Neighbourhood Association facebook page today. (The CWNA’s facebook page is a “closed group” page accessible only by members who have been admitted to the group by moderators; currently, 350 people are signed up.)

Dog owners at 66 Isabella are disappointed they will lose a place to socialize while their pets enjoy the private “playground,” while tenants in 50 apartments on the east side of the building are upset that they will be forced to relocate for at least six months while their units are reconfigured to permit construction of the tower addition. “Many are seniors and have called it home for 30 plus years. Residents of the other 150 units who are already suffering deafening noise from the continuous construction of high rises on Charles Street will be exposed to another 18 months to two years of the same for 12 hours a day. Many of these residents are seniors, shift workers, home office workers or parents of small children,” the protest organizers state in the media release on the CWNA facebook page.

The organizers are calling for people to join residents of 66 Isabella in a “lawn occupation” being held from 10 a.m. to 3 p.m. on Saturday to protest the apparently imminent destruction of the lawn and trees. “The City of Toronto and East York Community Council meet next Tuesday, January 10, to decide the project’s fate. If Mohican Holdings (owners of 66 Isabella) get approval the destruction of the lawn and trees will be almost immediate,” the organizers state.

$450,000 for local streetscape and park improvements

The fate of the green space is indeed on the agenda for the January 10 meeting of Toronto and East York Community Council,  at which time the TEYCC will consider approving zoning amendments that would permit construction of the 23-storey tower addition. Passage of the amendments was recommended by city planners in a December 13 2011 background report about the tower proposal. “The proposed zoning by-law  amendment application is appropriate for the development of this site as it provides for a mixed-use development on an underutilized site and adds to the supply of purpose-built rental housing. The site is within the downtown core along Church Street and near the Yonge-University-Spadina subway line.  There is already a mix of residential and commercial uses along Church Street and the proposed 23-storey addition to the east side of the existing building is an appropriate and compatible land use,” the planning report notes.

However, the planners recommended that the property owner be required to pay the city “$450,000 to be used toward local streetscape and park improvements” before  it can obtain its “first above-grade building permit for the development.” 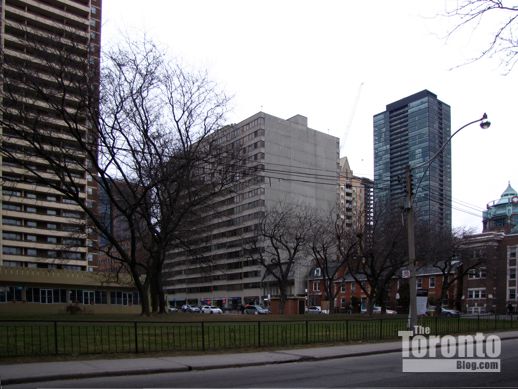 A view of the 66 Isabella private green space, looking to the northeast from Isabella Street this afternoon