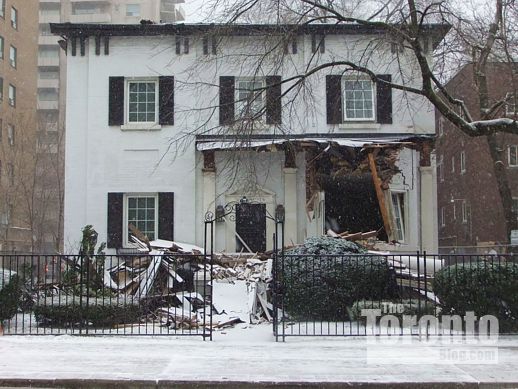 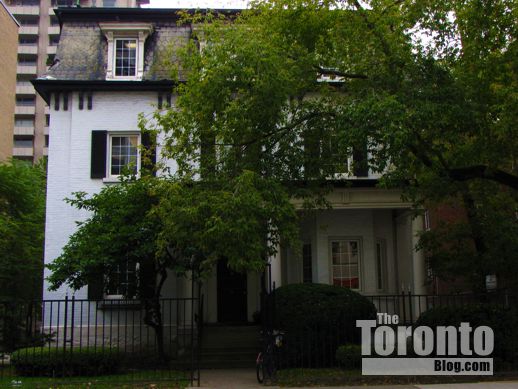 … seen here on  September 27 2010 after the property was sold for a reported $4.5 million by its former occupant Wellspring, the cancer support organization 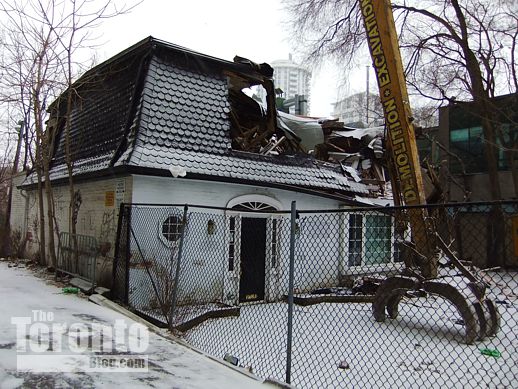 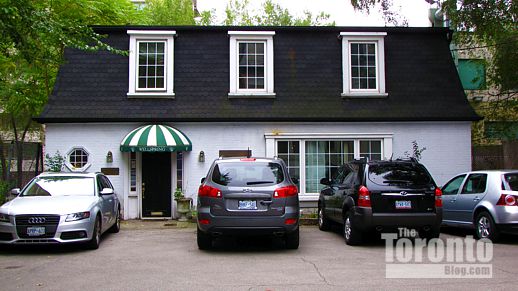 … the building in which Wellspring initially launched its programs in 1992. The north side of the 2-storey coach house is seen here on September 27 2010

Ignominious end: Residents of the Church-Wellesley Village area are dismayed that a stately Victorian-era mansion that has stood for approximately 100 years near the corner of Church and Wellesley Streets is being destroyed just 12 weeks after their city councillor requested that the “architecturally significant structure” be considered for heritage designation.

Yesterday afternoon, a wrecking crew began tearing apart the 3-storey Odette House and the 2-storey coach house behind it at 81 Wellesley Street East. As I reported in a September 27 2011 post, the two buildings had been owned by Wellspring, a non-profit organization that describes itself as “offering psychological, emotional, social, spiritual and informational support to individuals and families living with cancer.” Wellspring had decided to sell the property and relocate not only since it had outgrown the site, but also because maintenance and repair of the two old houses had become too expensive.

Wednesday’s demolition activity took neighbours by surprise, since no safety fencing or scaffolding had been installed around the property before the wrecking commenced, nor had any signs been posted to warn that demolition was imminent. Debris from the top floor fell to a heap in front of the mansion’s former main entrance, landing mere steps from the public sidewalk on the south side of Wellesley Street. The gate in the wrought iron fence next to the sidewalk had not even been closed.

The demolition had not been completely unexpected. Area residents were aware that, on December 1 2011, the City had accepted an application to demolish the two buildings. However, many were holding out hope that City Hall might be able to designate Odette House as a heritage property before its new owner could take any steps to redevelop the site.  Just one month earlier, on November 2 2011, Toronto and East York Community Council had adopted a motion in which Ward 27 Councillor Kristyn Wong-Tam requested that city staff consider designating 81 Wellesley East under Ontario’s Heritage Act.  In a letter to the council, Councillor Wong-Tam explained that Odette House “is an architecturally significant structure but is not currently protected by heritage designation. The building is clearly a surviving part of the early neighbourhood development of this area. In order to preserve the building as an important heritage resource, I am requesting City staff undertake a process to review it for designation under Part IV of the Ontario Heritage Act.” However, the heritage designation process typically takes months, if not years, largely since the City’s understaffed and overworked Heritage Preservation Services team is swamped with an extensive caseload.

After crews started smashing apart the two buildings at 81 Wellesley yesterday, outraged area residents posted photos of the wrecking work on the members-only Facebook page for the Church Wellesley Neighbourhood Association (CWNA), decried what one man called “another major heritage preservation failure in Ward 27,” and speculated about the motive for what appears to some people to be a suspiciously hasty demolition.  One CWNA Facebook group member, who reproduced details of the demolition application from the City’s website, said: “It looks like the developer wants to demolish these buildings pronto before any action can be taken to save them.” “Without doubt,” said another, “it was [Councillor Wong-Tam’s] motion to have the property designated which provoked the demolition on this site.” A third man, observing that the demolition had begun from the rear of Odette House, wondered if this was a tactic “to hide work till last possible moment?” Whatever the real reason, another huge disapppointment is likely in store for Church-Wellesley Village residents. As one of the CWNA Facebook group commentators pointed out, “Aside from the terrible loss here, now we’ll be staring at a gravel lot come Friday for the next few years” and quite possibly “a whole lot longer”  if there is a “correction” in the Toronto real estate market. Just one block along Wellesley Street, he noted, an empty gravel lot occupies the property where a former St John Ambulance building was demolished several years ago to make way for a condo highrise project that hasn’t materialized. The lot is an eyesore that irks many neighbours, who would like to see the City acquire the property to establish a public park — something they realize is highly unlikely to happen.

So far, there has been no public word on what 81 Wellesley’s new owner plans to do with the property, though it’s widely expected that a condominium tower will be proposed for the site. A Colliers International real estate listing had described Odette House as a “rare boutique building” with “development potential,” while a September 26 2011 Twitter post by real estate research firm Urbanation announced that 81 Wellesley had been sold for $4.5 million with a “future high-rise condo site planned.” In a quick Google search this afternoon, I found one real estate website touting “luxury condominiums” for 81 Wellesley. The website for Milborne Real Estate Inc. Brokerage sales representative Nadine Robbins includes several photos of the property and says it “is sure to be developed into a modern, luxurious and extremely convenient residential condominium.” Since the website provides an email address and phone number so people can “find out more about this exclusive pre-construction condominium,” I emailed to ask if Ms. Robbins could provide any details about the development plans for 81 Wellesley. She replied promptly, saying: “Unfortunately, I have no new information on the project.” Similarly, the development application status page on the City of Toronto website does not yet list any proposals for the site.

However, two things do seem certain at this point. One is that the former Wellspring buildings will soon disappear forever from the Church-Wellesley Village landscape. The other is that neighbours are mad as hell about it — and worried about what will take their place.

Below are photos I snapped this afternoon of demolition progress on Odette House and the coach house. Wrecking crews were not working either of the two times I passed by 81 Wellesley, so snow from today’s light flurries was beginning to accumulate on the rubble. 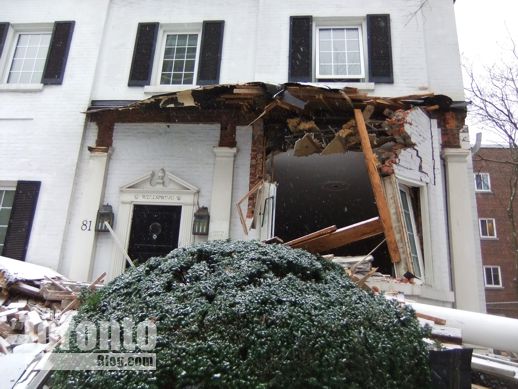 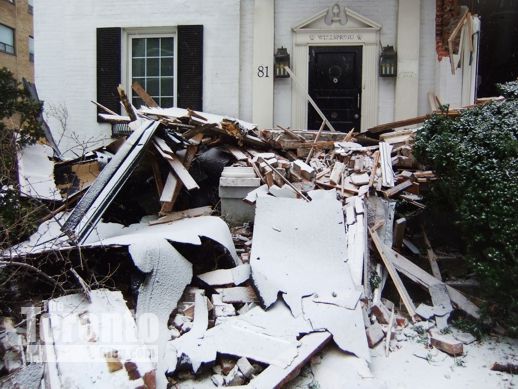 A huge heap of rubble lies outside the main entrance to Odette House, just inside the front gate. Demolition started without any scaffolding being put in place. 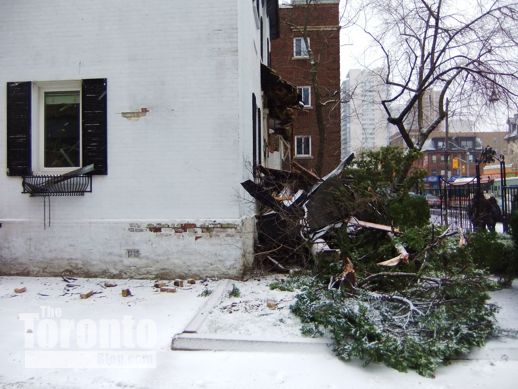 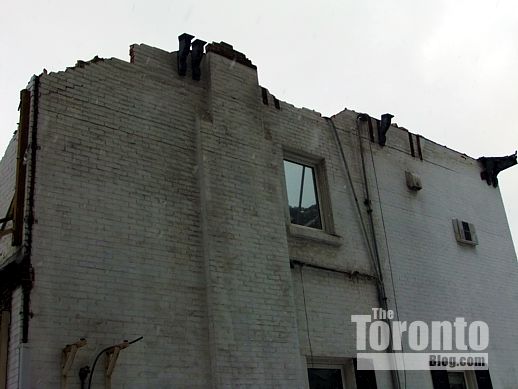 Looking up the brick wall on the east side of Odette House. The building’s roof, and much of the third floor, have been knocked down 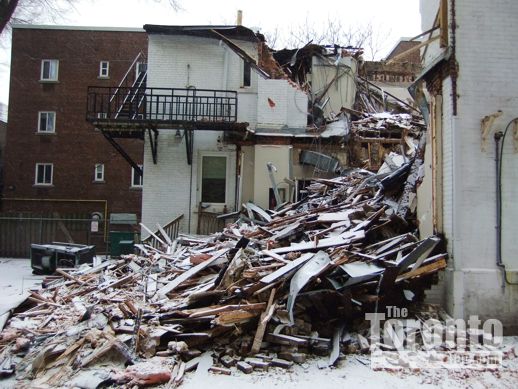 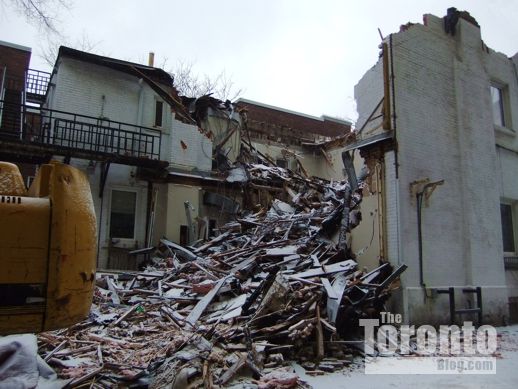 The wrecking machines were idle, and no demolition workers in sight, when I took these photos of 81 Wellesley this afternoon 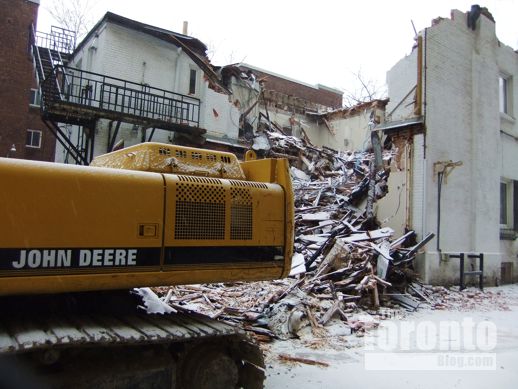 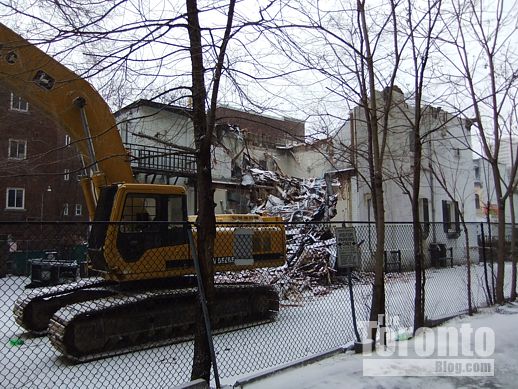 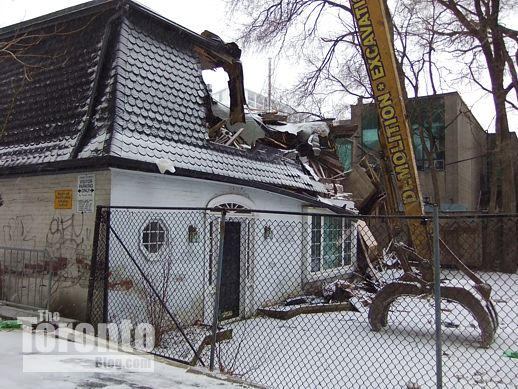 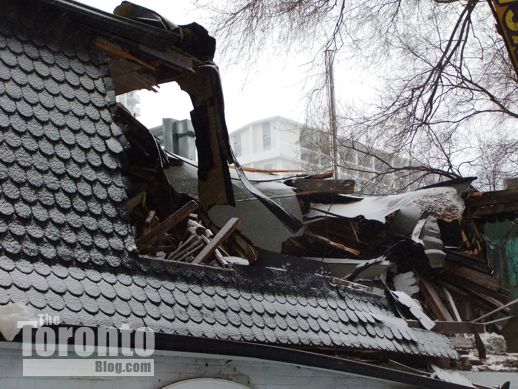 A closer view of the coach house roof demolition 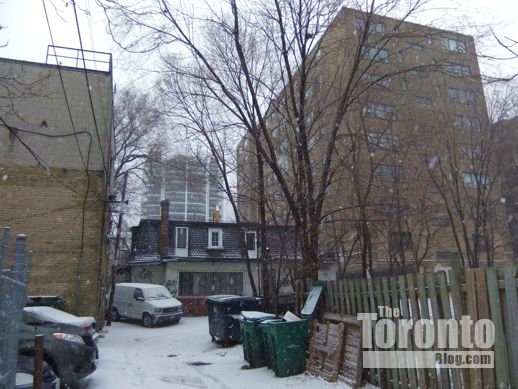 A view of the coach house from a service laneway leading south from the property to Maitland Street. Area residents are dismayed that a condo tower might ultimately rise on the site. 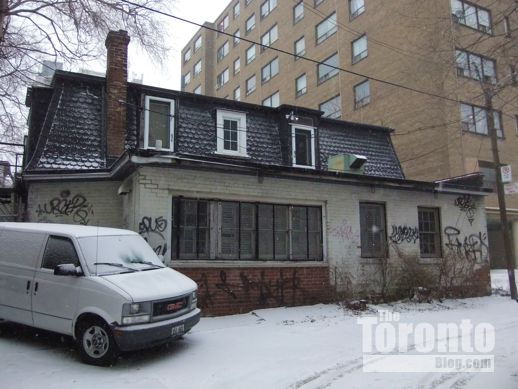 The south-facing side of the coach house is still intact — but for how long? 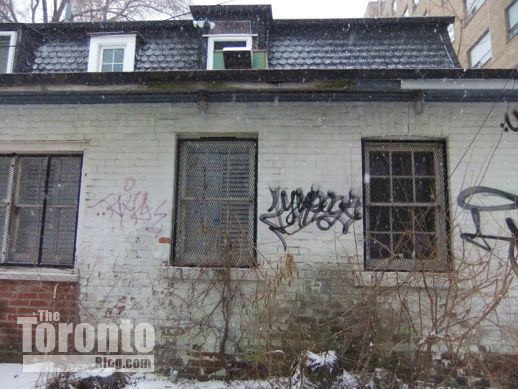 Graffiti tags on the rear brick wall of the coach house 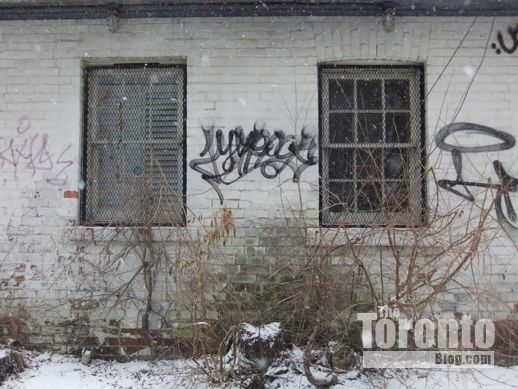 Maintenance and repair of the coach house and Odette House had become too expensive for the former owner, Wellspring 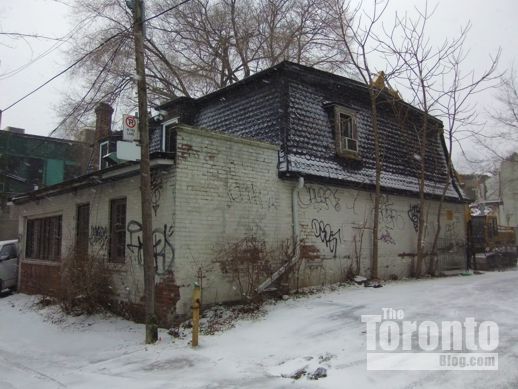 Another view of the coach house, from a laneway to its southeast 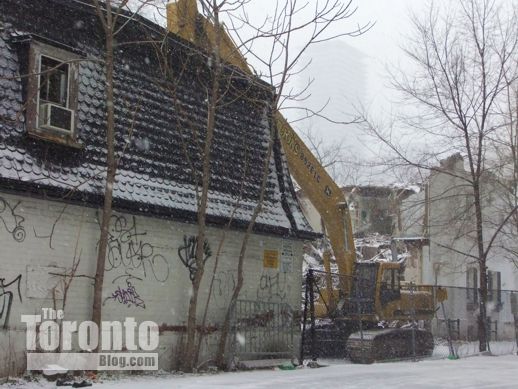 The 46-storey Casa condominium tower on Charles Street is slightly visible in the background. Area residents worry that a similar tall glass condo tower might be built at 81 Wellesley.