The restaurant’s fate was sealed last summer when Cresford Developments purchased the Bistro 990 building. (In a Bistro 990 “obituary” published yesterday in the Toronto Star, restaurant critic Amy Pataki says  that bistro owners Tom and Christine Kristenbrun cited personal reasons and their age — both are in their 70s — among their reasons for closing.)

Cresford already owned the parking lot beside Bistro 990, at the northwest corner of Bay and St. Joseph Streets. In 2010 this property, at the municipal address of 1000 Bay Street, had been approved by the city for redevelopment into a 32-storey mixed use building with 99 condominium suites and a 13-floor hotel with 115 rooms. That same year, the property on the other side of the restaurant — a 7-storey medical office building at 984 Bay — was put up for sale.

An online listing by Metropolitan Commercial Realty Inc. said the asking price for the 38,000-square-foot building was $11,750,000. Cresford eventually acquired that property and decided to build a condominium on the combined three sites it owned, rather than the condo-hotel project originally planned for 1000 Bay. It submitted a new rezoning application on November 30 2011, and city planners identified numerous issues and concerns with the proposal in a December 11 2011 preliminary report. Toronto and East York Community Council subsequently directed the planners to hold a community consultation to get public feedback about the condo plan, and that meeting took place on February 15 2012.

In the meantime, Cresford opened a presentation centre for its 1Thousand Bay condo project in the vacant street-level retail premises at 984 Bay Street.

Below are several more photos of the Bistro 990 building and adjacent properties on which the 1Thousand Bay tower will eventually rise. 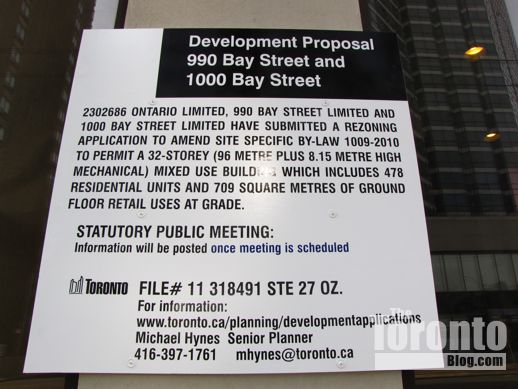 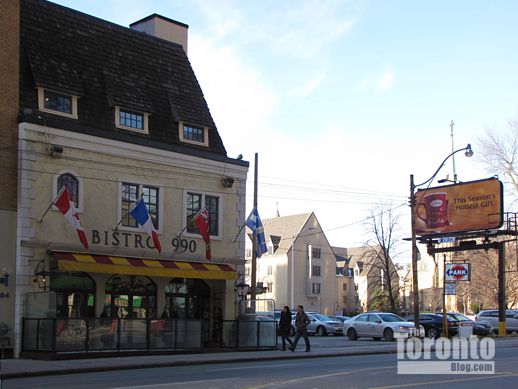 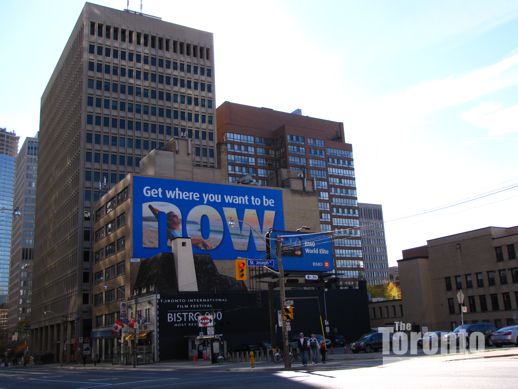 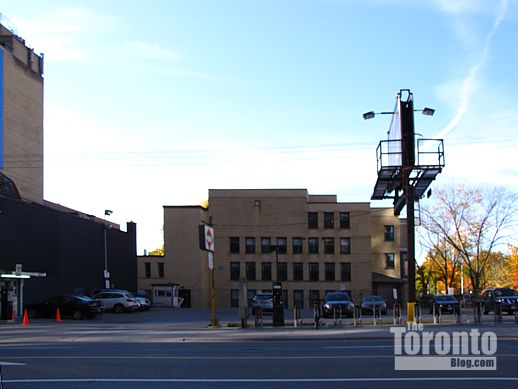 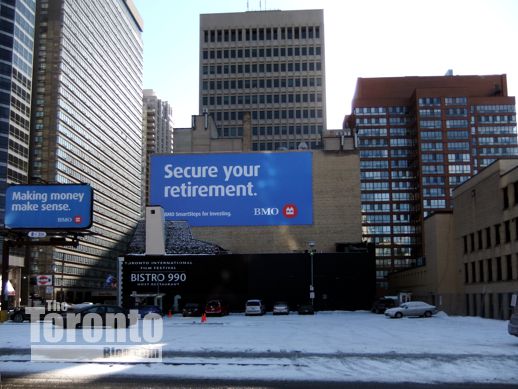 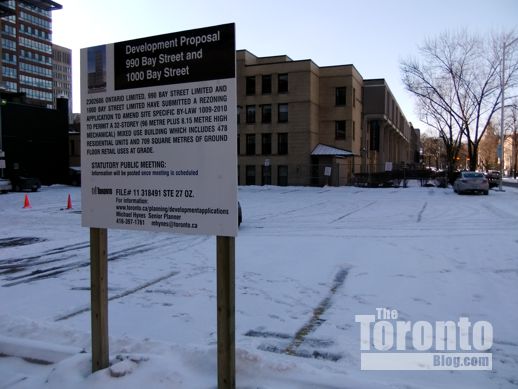 January 21 2012: Looking west across the 1000 Bay parking lot toward the University of Toronto campus, including the Cardinal Flahiff building right next door at 95 St Joseph Street (rear) 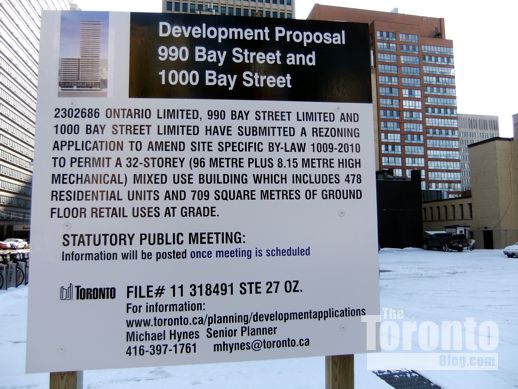 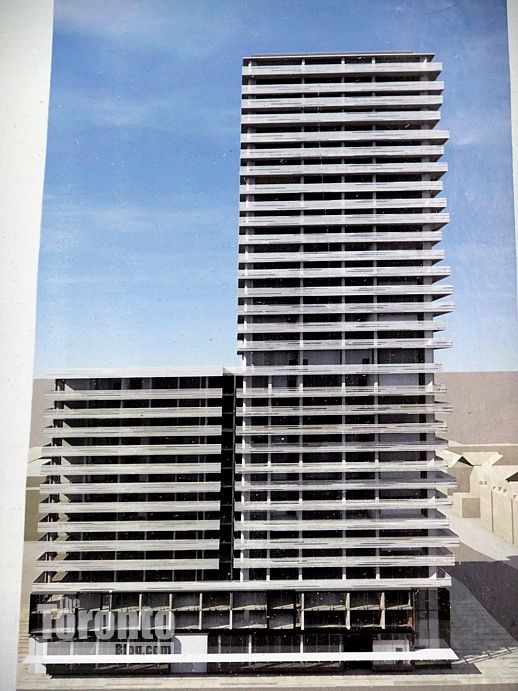 The artistic illustration of 1Thousand Bay that appears on the development proposal sign. The tower has been designed by Toronto’s architectsAlliance. 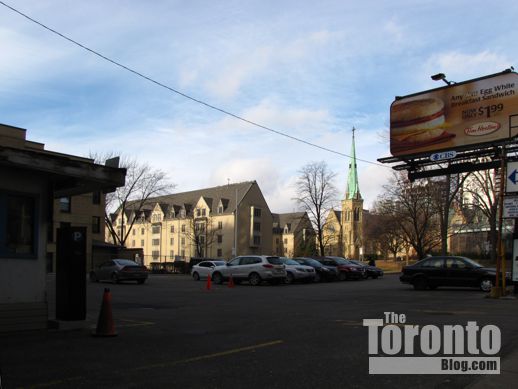 January 9 2012: The condo tower will overlook buildings on the University of Toronto campus across St Joseph Street, including St Basil’s Church 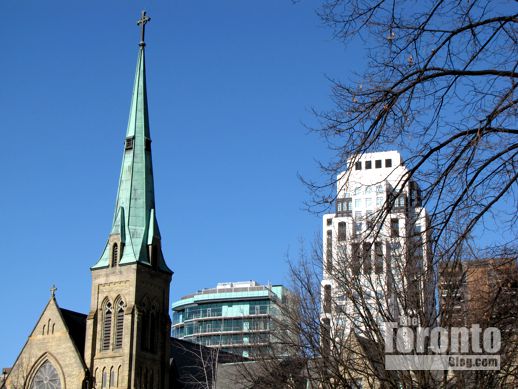 February 13 2012: The 1Thousand Bay tower will join St Basil’s Church and two condo highrises — 77 Charles West and One St Thomas — on the U of T-area skyline 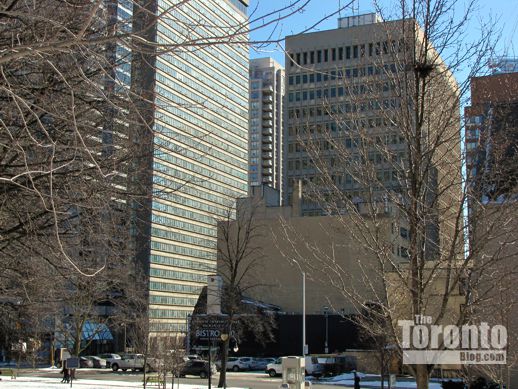 February 13 2012: A view of the 1Thousand Bay development site from the driveway outside St Basil’s Church 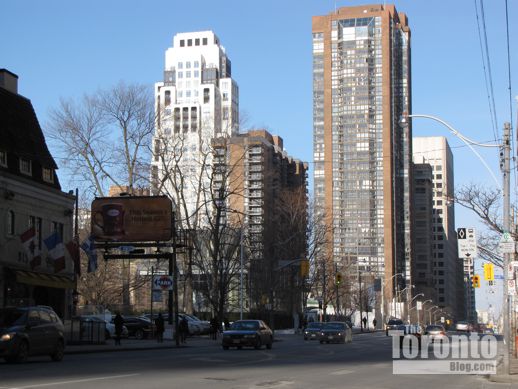 December 21 2010: Some of the apartment and condo highrises to the north of the 1Thousand Bay site. The two U Condos towers currently under construction at Bay & St Mary Street will eventually block most of those buildings from view.