When complete, the 780,000 square foot research, science and technology innovation centre will stand 20 storeys and house over 2,300 employees. One month ago, eight floors had been built, but with contractors continuing to add one level per week, the building now rises more than 12 storeys.

Below are more photos I shot of the MaRS tower — and its reflection in the OPG building — in late March, along with two photos from this past Sunday. I have paired those particular pictures with artistic illustrations of the tower to show how the construction is shaping into the design envisioned by B+H Architects. There’s also two artistic illustrations, from the Trillium Architectural Products website, that depict aerial views of the entire MaRS Discovery District once the Phase 2 tower is complete. 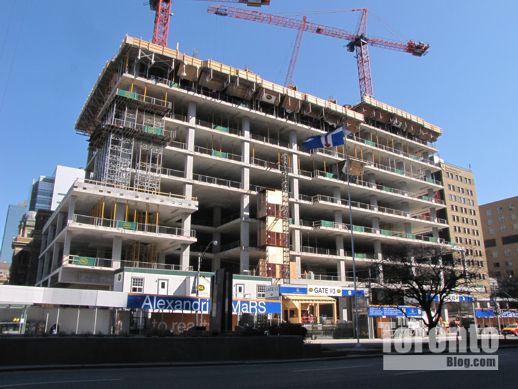 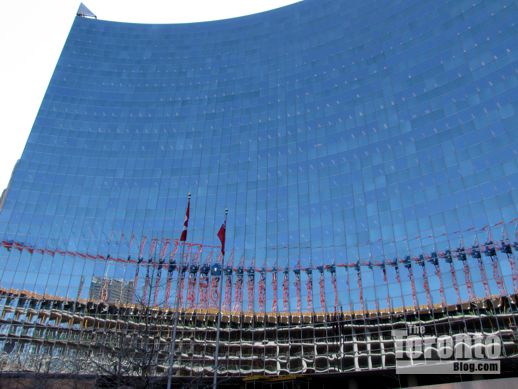 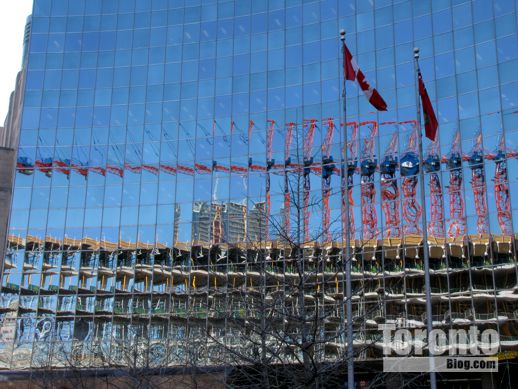 March 20 2012: Besides the MaRS tower, the OPG building’s glass facade also reflects the top of the 50-storey Burano condominium tower under construction a few blocks to the northeast, at Bay and Grosvenor Streets 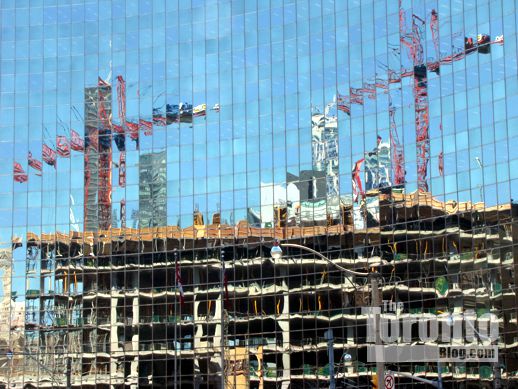 March 20 2012: From this angle, the OPG headquarters reflects two of the cranes on the MaRS project, along with wonky images of condo towers on Bay Street between Grosvenor and Gerrard Streets 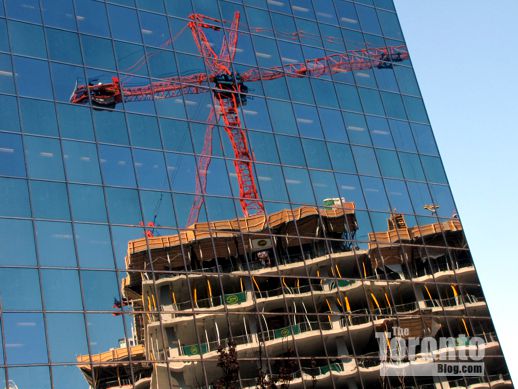 March 20 2012: A MaRS reflection on the southeast corner of the OPG building 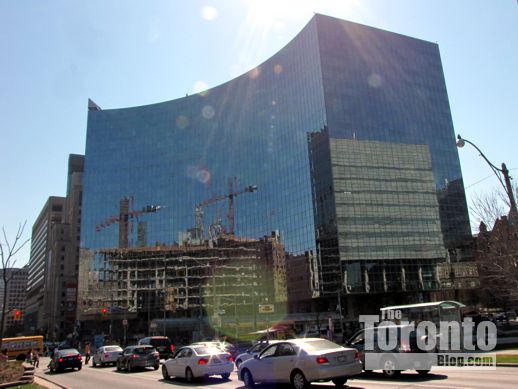 March 20 2012: The lens hood for my camera was damaged, so this shot wound up with excessive glare from the midafternoon sun. The photo nonetheless gives a good idea of how the MaRS reflection in the OPG building appears to people travelling southbound from Queen’s Park Crescent. 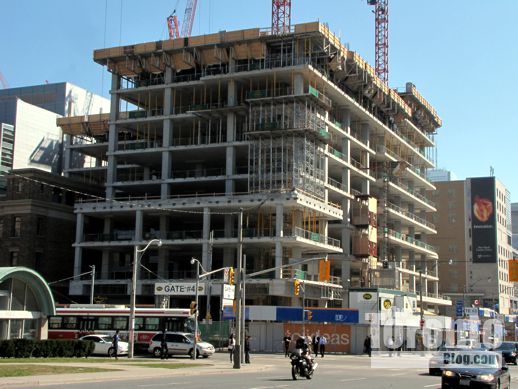 March 20 2012: Another view of the tower from the median below Queen’s Park 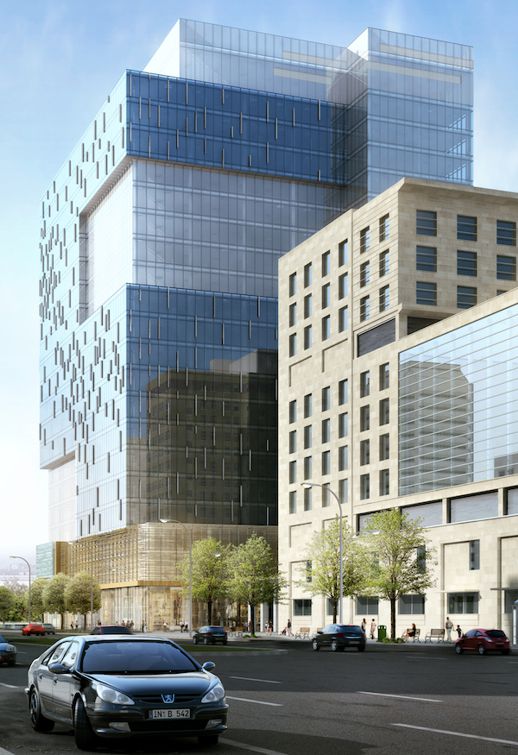 This rendering, from the MaRS Centre Phase 2 website, depicts a daytime view of the building from the southwest, along University Avenue … 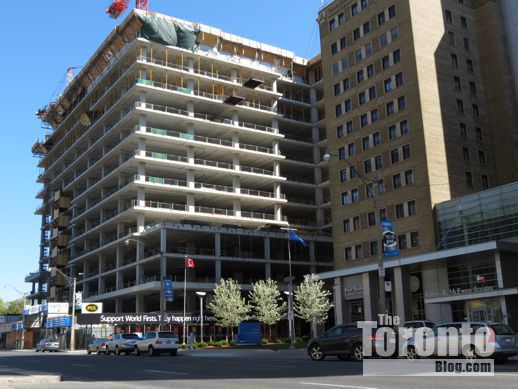 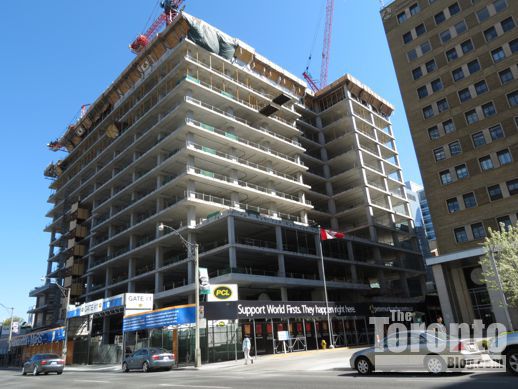 April 29 2012: Another view of the tower from the University Avenue median 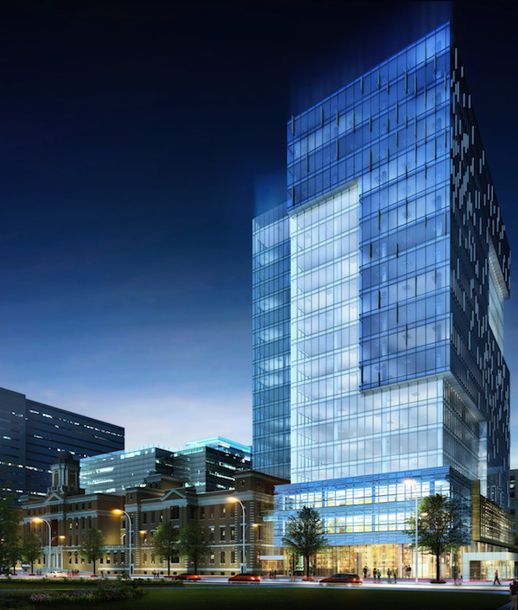 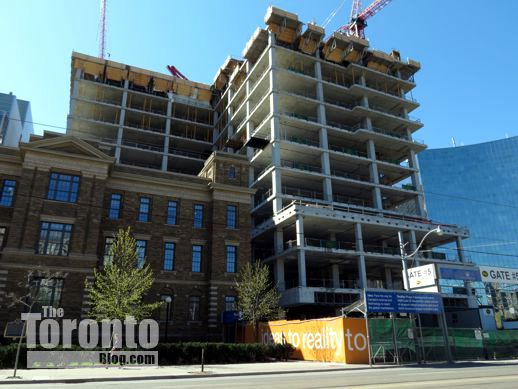 … while this shot, from Sunday morning, shows the Phase 2 tower continuing its ascent above the west end of the brick heritage building 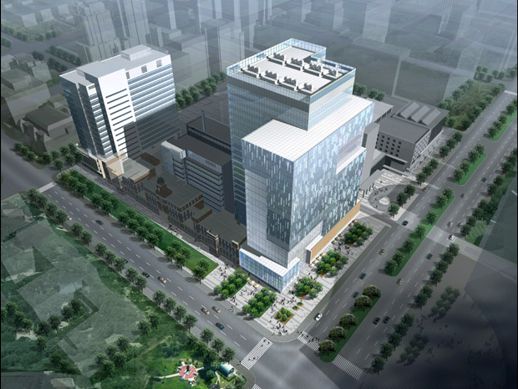 This artistic rendering, from the Trillium Architectural Products website, depicts an aerial northwest view of the completed MaRS complex. Trillium is supplying the project with more than 650 hollow metal doors and frames, along with 2 stainless steel openings that will connect MaRS to the Queen’s Park subway station. 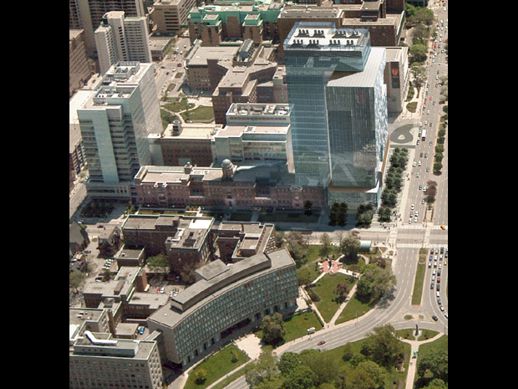 This illustration, also from the Trillium Architectural Products website, depicts another aerial view of the MaRS Discovery District along College Street