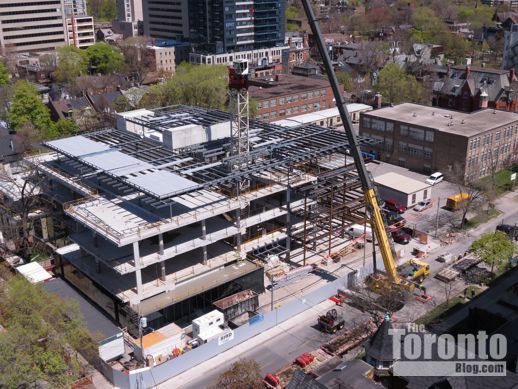 April 29 2012: The yellow and black portable crane assists with the removal of the white construction crane from the ETFO office building site on Isabella Street 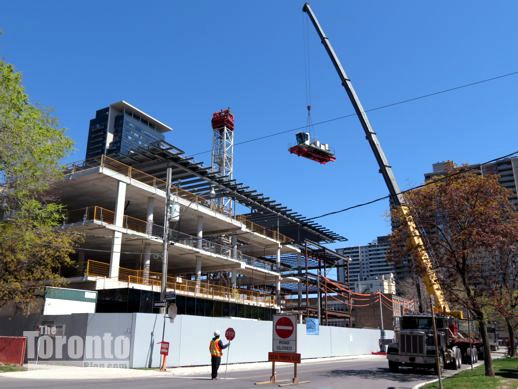 April 29 2012: The operator’s cab for the construction crane is slowly lowered to a flatbed truck waiting on Isabella Street 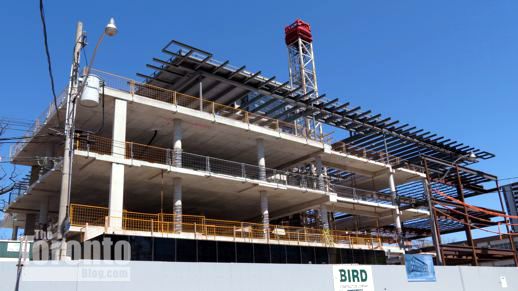 April 29 2012: A southwest view of the 4-storey building, which is being designed to achieve LEED platinum certification

This artistic illustration, one of several renderings that appeared on a New Building Construction page of the ETFO website,  suggests how the building will look once construction is complete in March 2013. The organization’s headquarters was designed by Toronto’s  Kuwabara Payne McKenna Blumberg Architects.

Nicely framed: When I last reported on construction progress at the new Elementary Teachers’ Federation of Ontario (ETFO) headquarters on December 8 2011, the building’s ground floor was still beginning to take shape. Only four months later, construction crews have finished pouring concrete and assembling steel framework for all four floors of the structure, and have also installed windows along sections of the first floor. And just this weekend, crews disassembled and removed the big white construction crane that had towered above the site since the middle of last August.