A listing overview on CBRE’s website says the Government of Ontario has retained CBRE “on an exclusive basis” to arrange the sale of what’s called the “Bay & Wellesley Lands.” The online flyer describes the L-shaped property, bounded by Wellesley Street on the north, St Luke Lane on the East, and Breadalbane Street on the south, as an “outstanding development opportunity.”  It adds that the property offers “abundant space to adequately phase multiple high-rise towers,” and notes that “approved in-place zoning is 3.5 times site density; approved for a total gross floor area of approximately 319,210 SF (approximately 290,100 SF is allocated for residential density).”

As I reported in a January 25 2012 post, Ontario Cabinet Minister Glen Murray told the annual general meeting of the Church Wellesley Neighbourhood Association (CWNA) that the province was looking into the possibility of declaring 11 Wellesley as a surplus Crown asset, and making it available to the city to acquire for use as public realm parkland or open space.

Those remarks led many residents of the densely populated area, which city and provincial politicians and planners have publicly admitted is desperately underserviced by parkland, to believe the site would indeed become a new public green space. Area residents, encouraged by at least one neighbourhood association, had been lobbying Mr. Murray as well as Ward 27 Councillor Kristyn Wong-Tam to do their utmost to ensure a park, and not condo towers, would be built on the site. (For more details on that grassroots campaign, see my April 21 2011 post).

Residents held out hope that the park would materialize, even though it was obvious that the sale of the lands for commercial purposes could net tens of millions of dollars for the provincial government, which has been struggling with severe budget cuts and a massive public debt.

Motion to be heard by City Council on July 11

Although the property’s commercial real estate listing appears to suggest that any plans for a new public park on the site are dead in the water, Councillor Wong-Tam isn’t giving up. She will bring a motion before City Council next week, asking it to direct “the City Manager, the Director of Toronto Real Estate Services, in consultation with the General Manager of Parks, Forestry and Recreation, Toronto Parking Authority and the Ward Councillor, to negotiate with Infrastructure Ontario and the Ontario Government and to report back to the October 18, 2012 meeting of Government Management Committee on the results of negotiations to acquire 11 Wellesley Street West for parkland purposes.”

The City of Toronto itself is strapped for cash and, at first glance, would not appear able to afford to purchase prime downtown real estate for parkland. However, sources have told me that, over the past decade or two, the city has collected tens of millions of dollars in development fees that are specifically earmarked for the acquisition and maintenance of parkland. Word on the street, though, is that the current market value of 11 Wellesley West is more than $50 million, which could be substantially higher than many city councillors would be willing to spend for a new park.

Councillor Wong-Tam’s motion will be heard by City Council on Wednesday, July 11. It will be seconded by Ward 43 (Scarborough East) Councillor Paul Ainslie. 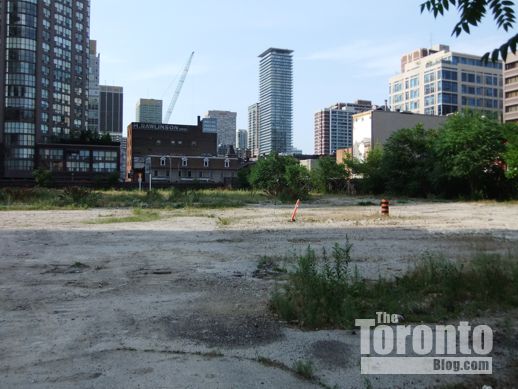 The eastern half of 11 Wellesley Street West, viewed from Breadalbane Street. The property has been vacant for about 20 years, though it was briefly used for a skateboard park around a decade ago. 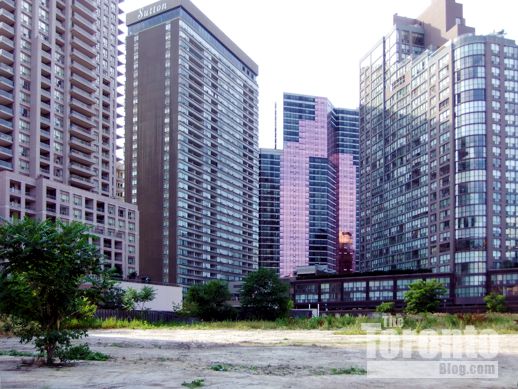 Looking north from Breadalbane Street toward condo towers and the now-closed Sutton Place Hotel on Wellesley Street. According to Councillor Wong-Tam’s motion, Ward 27 is the city’s second-most populous ward, and has more highrise development than anywhere else in Toronto. 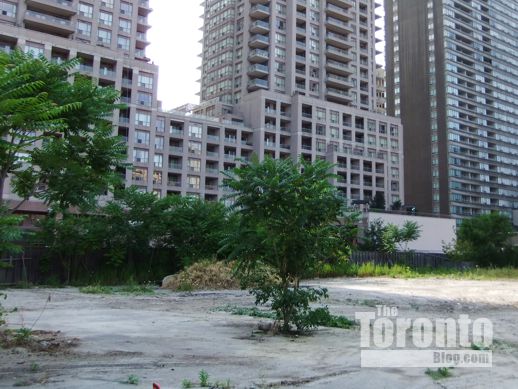 Looking toward the northwest corner of 11 Wellesley from Breadalbane Street. Councillor Wong-Tam’s motion says this area of Ward 27 is “a Local Parkland Acquisition Priority Area characterized by high growth and subject to development pressure.” 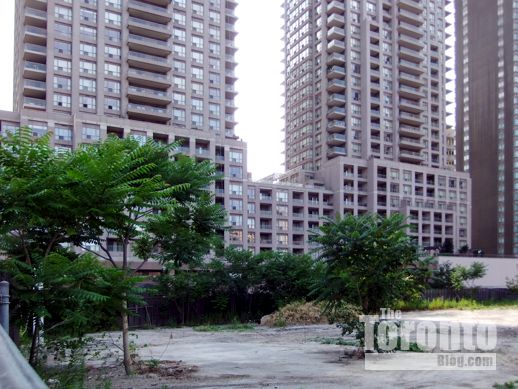 Condo and rental apartment highrises on Bay Street line the west end of the 11 Wellesley site, which is gradually filling in with weeds, bushes and trees.