Milan Condo construction more than one-third of the way up | www.TheTorontoBlog.com 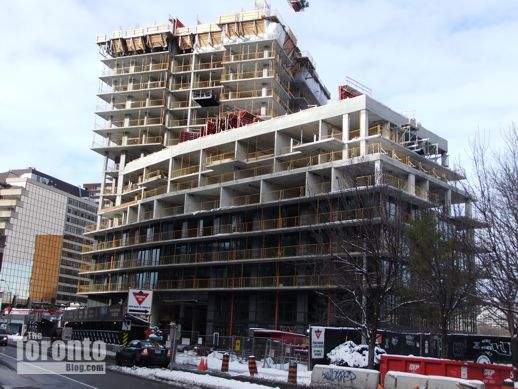 December 30 2012: Church Street view of construction progress on The Milan Condominium, which has climbed more than 15 floors near the northeast corner of the Church Street-Yonge Street-Davenport Road intersection. Only 8 months ago … 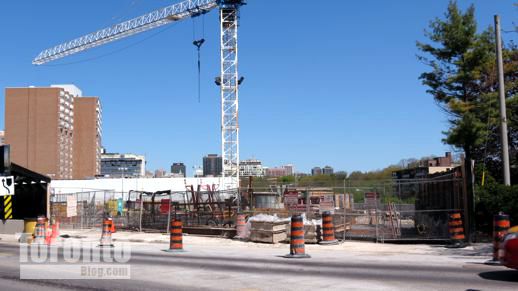 … construction was just beginning to approach ground level at the east end of the project site, formerly occupied by a parking lot for the Canadian Tire flagship store on Yonge Street (white building at rear left) 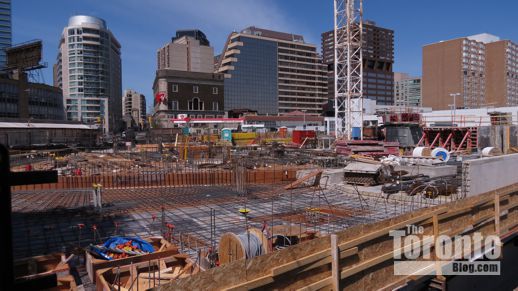 May 6 2012: Looking toward the Church-Yonge-Davenport intersection of Yorkville from the east end of The Milan Condominium construction site

Steady climb: The Milan Condominium continues to make its mark in Yorkville. As the tower steadily climbs taller on a former parking lot site near the northeast corner of Yonge and Church Streets, it is completely changing the look and feel of the area in the process.

Construction was still below grade last May, but during the summer the building began making its presence felt as The Milan’s podium reached three levels on its way to eight.  The tower has since passed 15 floors, and now commands attention from the east, north and west. I have crossed the Church-Yonge-Davenport intersection several times in the past two weeks, and on each occasion have overheard other pedestrians making positive comments about how different the corner looks with The Milan on the rise. (I haven’t heard any negative feedback about the building, but have heard passersby remark that it’s a huge improvement over the unsightly parking facility that previously occupied the site.)