The McDonald’s outlet provoked public controversy when local media revealed several years ago that the restaurant had been operating on property owned by the City of Toronto  and had been paying a mere $15,500 per year in rent under a 99-year lease.

The City (known as the municipality of Metropolitan Toronto at the time) had acquired 192A Bloor West in 1960 during construction of the Bloor-Danforth subway line. The foundation for the building that presently stands on the site actually was built quite close to the top of the underground subway structure.

In December 1971, the City signed a long-term lease for the premises with McDonald’s Restaurants of Canada. The lease started on January 1 1972 for 33 years, at an annual rate of $15,500 plus taxes. McDonald’s had the right to renew for two additional 33-year terms, at rental rates to be agreed upon. (If the parties couldn’t agree, the matter would be sent to arbitration.) The initial lease expired on December 31 2004 and McDonald’s exercised its right to renew for 33 more years; however, the parties couldn’t agree on the new rent and McDonald’s kept paying $15,500 annually while negotiations continued. A City staff report recommended the rent be increased to $195,000 per year, but McDonald’s didn’t agree with the appraisal that had determined that amount. Meanwhile, the City’s administration committee declared the land surplus property, and invited McDonald’s to submit an offer to purchase. If a “recommendable offer” wasn’t submitted, the City would attempt to sell on the open market.

At its March 3 2008 meeting, City Council accepted McDonald’s offer to purchase the property for $3.38 million even though the prime site — directly across the street from the Royal Ontario Museum (ROM) — was estimated to be worth as much as $7 million to $9 million. Under terms of the sale, McDonald’s would have to pay the City 50% of any profits realized if it in turn sold the land or entered into a joint venture with someone else within 10 years of the sale. The sale agreement also included a provision stipulating that the 100 meters of airspace above the property would be leased back to the City for a nominal sum, thereby giving the City control of that area for 10 years. (This meant the city could limit any redevelopment of the property in that period to a maximum height of 100 meters.)

As reported by the Toronto Star, McDonald’s then sold the site for $3.38 million to a company affiliated with developer Bazis Inc., which in turn sold the site to Exhibit Private Residences Inc. for $9.3 million. On March 18 2009, Bazis applied to the City for zoning changes to permit construction of a condo tower with street-level retail space. 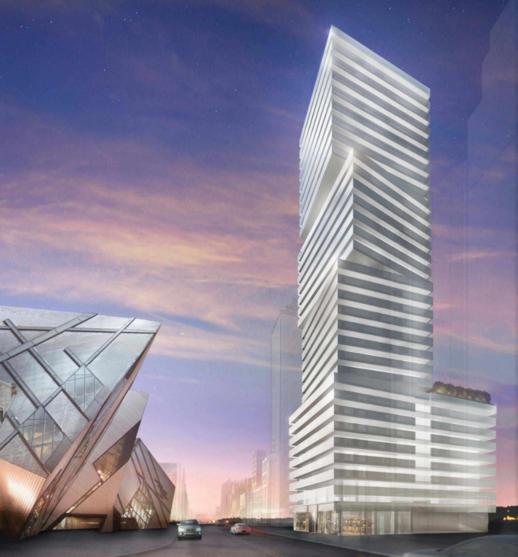 This artistic illustration, from the Exhibit Residences project website, shows the tower’s proximity to the Royal Ontario Museum, left … 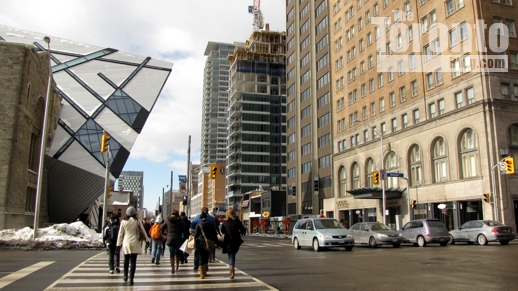 …. while this February 12 2011 photos shows the view west along Bloor Street from Avenue Road. The highrise under construction on the north side of the street is Museum House on Bloor condominium, which will be Exhibit Residences’ next-door neighbour.

According to a March 30 2010 city planning report, the developer originally proposed to build a 28-storey condo tower on the site of four adjacent low-rise buildings on Bloor. The 196-unit tower would sit atop a 2-storey podium containing retail space, while below that would be a six-level underground parking garage.

Several revisions resulted in an amended proposal for a 32-storey tower with 183 residential units in 1- and 2-bedroom configurations. The tower would have an 8-level podium, to its rear, that would contain 176 above-ground parking spaces and a landscaped outdoor amenity space on the podium roof.  The condo tower would rise from the site of three adjacent buildings, rather than four (the developer had been unable to acquire the site at 192 Bloor West which had been occupied by a lounge called Lobby Bar at the time.)

In the March 2010 report, city planners recommended the project be approved, describing it as “being substantially in compliance with the development criteria for Mixed Use Areas, Public Realm, Built Form and all other Official Plan policies, the Bloor Corridor Visioning Study and urban design guidelines.”

Council approved Toronto City Council approved the project on May 11 2010, stipulating that the developer would have to pay what is known as “section 37” community benefits including: $470,000 for landscaping, restoration work and future upgrades to Jean Sibelius Square Park in the West Annex; $30,000 for the City’s heritage plaque program in the Annex; $230,000 for “additional improvements” to Jean Sibelius Square Park; $200,000 for the Annex Heritage Conservation District Study; and $100,000 for capital improvements to Toronto Community Housing Corporation (TCHC) affordable housing in Ward 20. On August 25 2010, City Council voted for several revisions to the s. 37 agreement, changing the due date for the payments as well as requiring the developer to provide an additional $50,000 for reconstruction of an east-west lane behind the condo development site.  (The official opening for the revitalized Jean Sibelius Square Park took place on June 10 2012.) 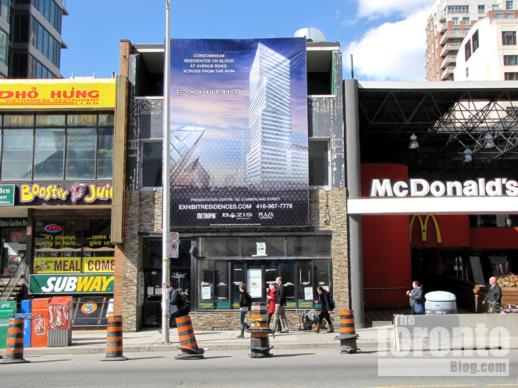 April 1 2011: A banner with an illustration of Exhibit Residences has heralded the forthcoming redevelopment project for the past two years

Bazis Inc. had promised condo purchasers that site demolition would commence in January 2013, and it did: wrecking crews and equipment rolled onto the property last Tuesday (January 29).  Several photos showing the interiors of the doomed restaurant buildings, and early stages of demolition, can be viewed in a January 29 post on the Bazis blog. The website says demolition work is expected to last until March, with excavation and shoring work anticipated to begin in April.

Exhibit Residences will boast “extensive lifestyle amenities” on its 9th and 10th floors, according to the project website. The 9th floor will feature a “curved bar with a lounge area, spacious party room with fireplace, [and] elegant private dining room with a lounge and kitchen. The party room can be opened up to access the outdoor garden oasis and reflecting pool.” The 10th floor will be home to a fitness room with views of the garden oasis, a yoga studio, change rooms and a “cool down lounge.”

When they’re not enjoying the building amenities, residents will relax in their generously-sized condo suites. Although all units in the middle two “cubes” of the building are sold out, the bottom segment (Cube 1) has a 973-square-foot 2-bedroom unit with media room still available, according to the Exhibit website. The tower’s top segment, Cube 4, has suites available in 10 different configurations ranging from an 864 square foot 2-bedroom with media room, to a 1068-square-foot 2-bedroom + den, and even larger residences including a roomy 2398-square-foot 2-bedroom + den + family room. (Prospective purchasers will have to visit the project’s presentation lounge on Cumberland Street for further information, since prices aren’t posted on the website.)

Below are floorplan illustrations for two of the available condo layouts, followed by several photos of the building site. Additional photos of the Exhibit site and surrounding area can be viewed in my April 7 2011 post about the project. 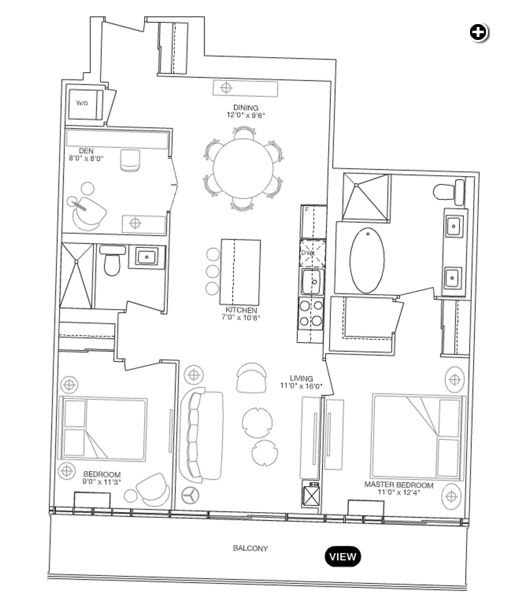 This illustration of a 1068-square-foot condo appears on the Exhibit Residences website. Click on the image to view it in a larger format.

An illustration of the layout for an available 2,378-square-foot suite 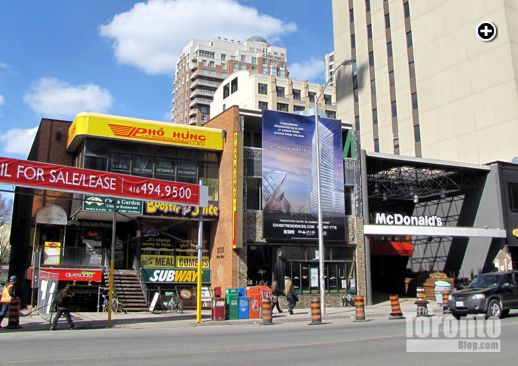 April 1 2011: A view of the three buildings that will be demolished and replaced with the Exhibit Residences condo tower. The various food outlets on the premises were popular with students from the nearby University of Toronto campus, as well as visitors to the Royal Ontario Museum across the street. 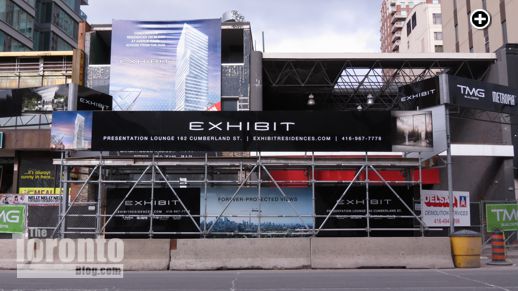 February 3 2013: The public sidewalk detours onto the curb lane of Bloor Street to protect pedestrians from a construction staging area in front of the building site. City Council approved the 32-month closure and sidewalk detour on May 8 2012. 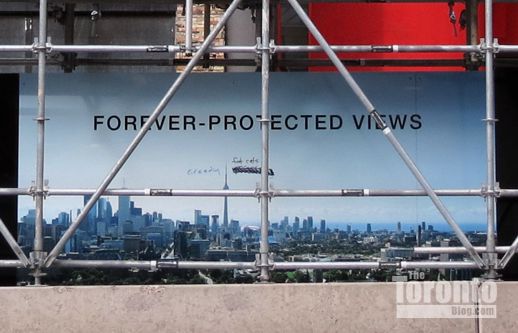 February 3 2013: The condo tower’s enviable south views are promoted in this poster on the hoarding next to the construction staging area 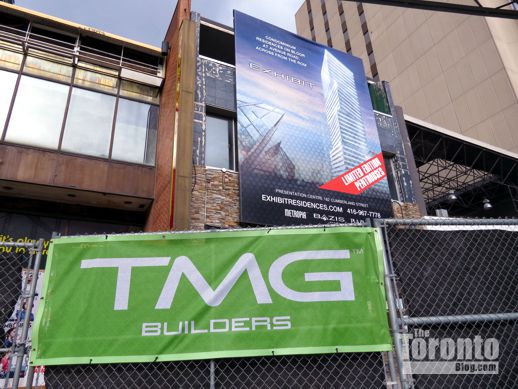 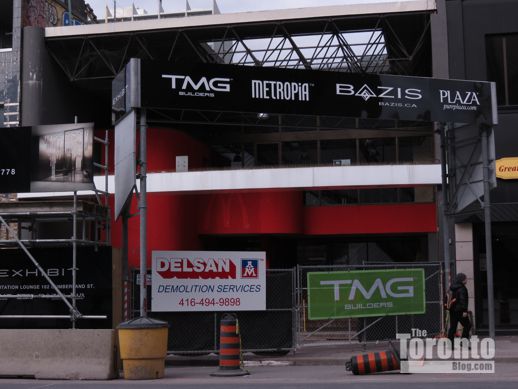 February 3 2013: A view of the red exterior of the McDonald’s outlet that occupied the building for 41 years.  Delsan Demolition Services has begun tearing apart the building interior. Demolition is expected to last until March. 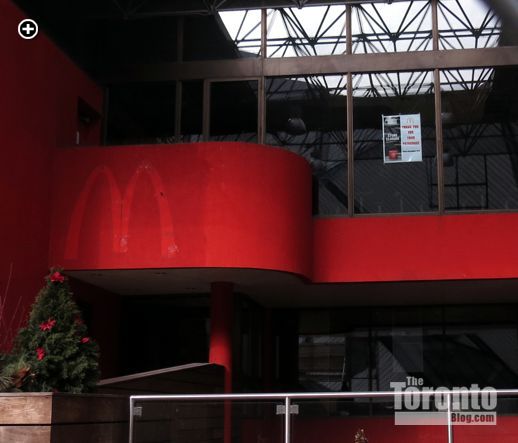 February 3 2012: The McDonald’s golden arch is long gone, and the sign in the window says “Store Closure … Thank you for your patronage” 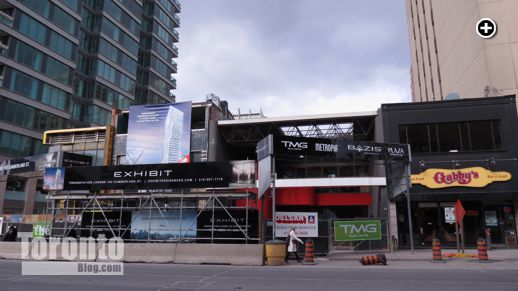 February 3 2012: Exhibit Residences will be flanked on its left side by the Museum House on Bloor luxury mid-rise condominium, and on its right by the low-rise building with the Gabby’s bar & grill at 192 Bloor West plus the adjacent 15-storey office building at 180 Bloor West. 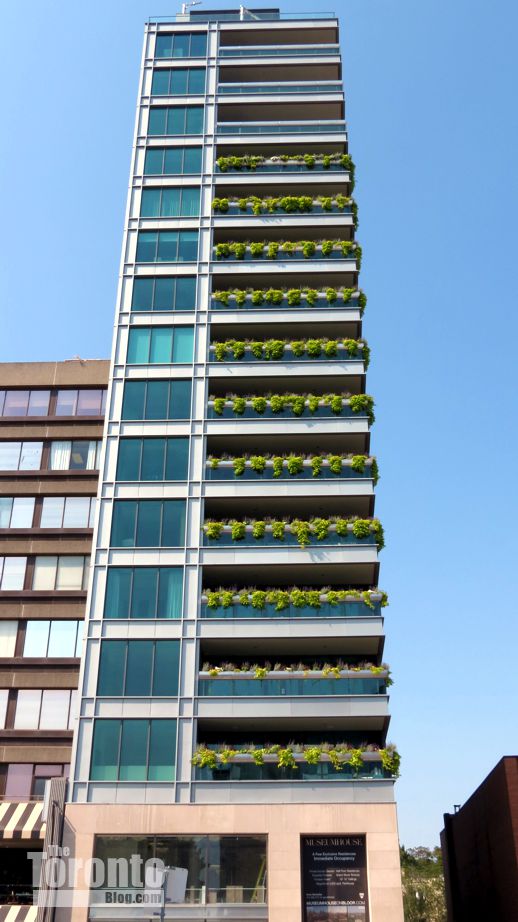 August 31 2012: The 19-storey Museum House on Bloor condominium building on the west side of the Exhibit Residences site opened for occupancy last year. Its residents will have front-row seats to watch as Exhibit gradually climbs higher than their own building during the next two and a half years.