The project, which adds much-needed rental accommodation to the burgeoning downtown core, was approved by City Council on July 12 2011. That ended more than a decade of work for city planners, who had been approached with a variety of different development proposals to which they, and many neighbourhood residents, raised serious objections.

The first series of development applications were described in a March 2 2009 preliminary report by city planners. The report noted that a 19-unit townhouse complex called Berkeley Mews was proposed in 1998. However, that development application didn’t proceed past the City’s “notice of approval conditions” stage of considering the proposal. In February 2005, a plan for a 28-storey building was presented to city planners, who felt the development would be far too big for the predominantly low-rise surrounding neighbourhood.

Concert Properties then acquired the property and, during 2006 and 2007, discussed a number of different development scenarios with city planners. In 2008, Concert submitted a rezoning application for a 19-storey rental building, and followed that with a revised December 30 2008 application proposing a 21-floor highrise. That wasn’t acceptable to city planners, who maintained that significant reductions would have to be made to the proposed building height before they could approve the development.

A revision presented to the public in 2010 proposed a 13-storey building that would be operated by Toronto Community Housing Corporation (TCHC).  This plan didn’t go over well, either, with local residents expressing concerns that the neighbourhood already had its share of social housing. The developer and architects went back to the drawing board and came up with a third proposal — the project now under construction. This one got the nod from city planners, whose June 3 2011 final report said a 10-storey structure was more “in keeping with the existing and planned built form context in this area of King – Parliament.

“The project … will result in the redevelopment of an under-utilized site with a building that enhances and strengthens the heritage character of Berkeley Street, consistent with the planning framework for King – Parliament,” the planners explained in recommending City Council enact zoning bylaw changes permitting the project to proceed.

With construction in the final stages, Concert Properties is anticipating completion this summer, and is currently accepting waiting list registrations for accommodations. Meanwhile, Concert is getting set to start occupancy for its other new downtown rental building, Motion. The 29-storey building at the southwest corner of Bay and Dundas Streets is nearly finished, and the Motion website is advertising spring move-ins for studio, 1- and 2-bedroom suites.

Below is a Google Street View image of the One32 Berkeley site sometime prior to construction, along with a building rendering that appears on the Concert Properties webpage for the project. Those are followed by a series of photos I shot during the weekend. 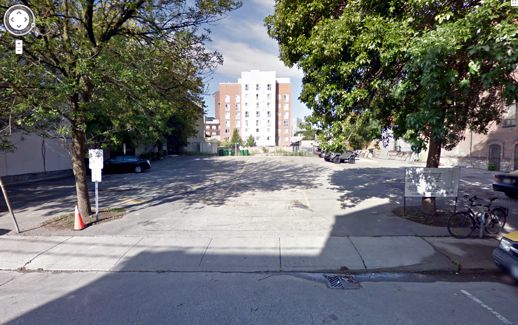 This Google Street View photo shows the 132 Berkeley Street site while it was still being used as a surface parking lot, before construction of the apartment building commenced. A city sign announcing the original 2008 Concert Properties proposal for a 19-storey building is posted in front of the tree at right. 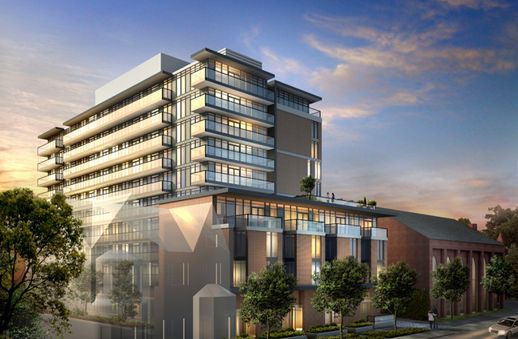 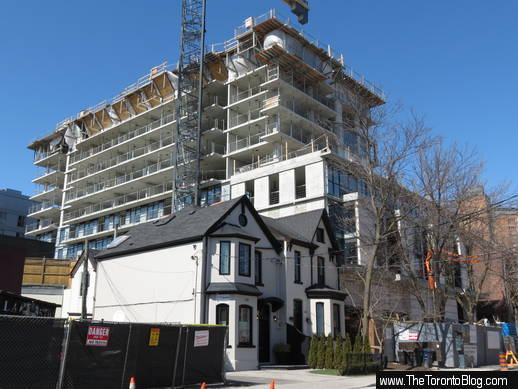 … while this photo shows how the actual building looked like on Sunday, when viewed from the same perspective 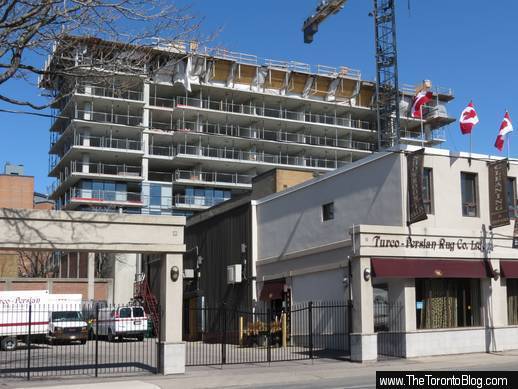 The apartment building rises behind the Richmond Street premises of Turco-Persian Rug Co., a family-run business that has been operating there since 1906 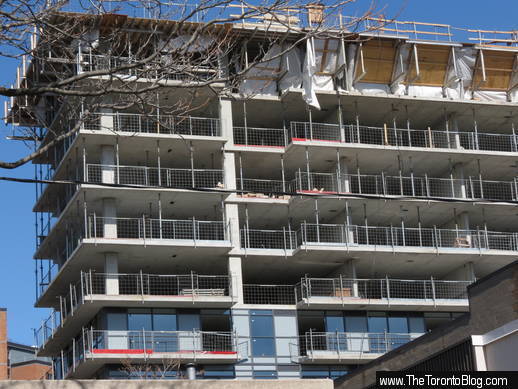 A view of the upper six floors on One32 Berkeley’s southwest side, behind the Turco-Persian Rug Co. facility 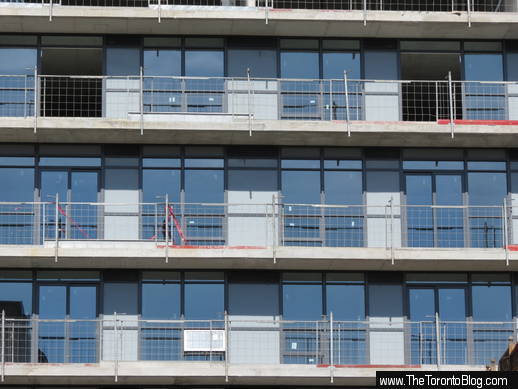 Windows and exterior cladding have been installed on the lower half of the building so far. Balcony railing installation will follow later. 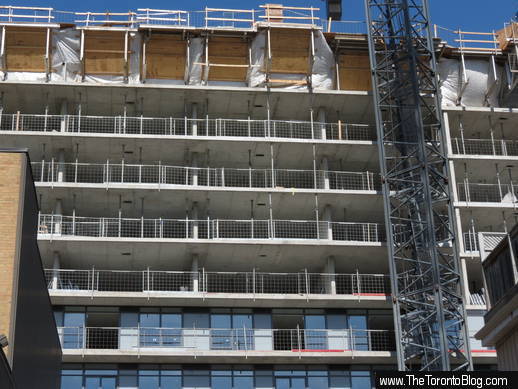 The construction crane rises near the southeast corner of the building 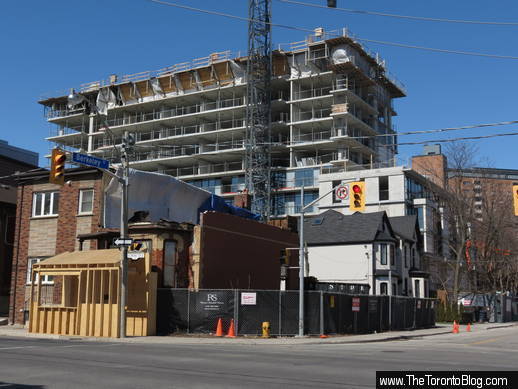 Construction viewed from the intersection of Berkeley and Adelaide Streets 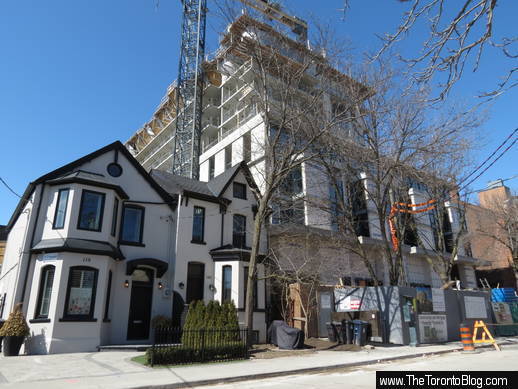 The new 10-storey apartment building rises above, but doesn’t overwhelm, the heritage-character houses next door. Partially visible on the right side of the photo is the rear of the historic Berkeley Church, which was built in 1871 but is now operated as a special events venue. 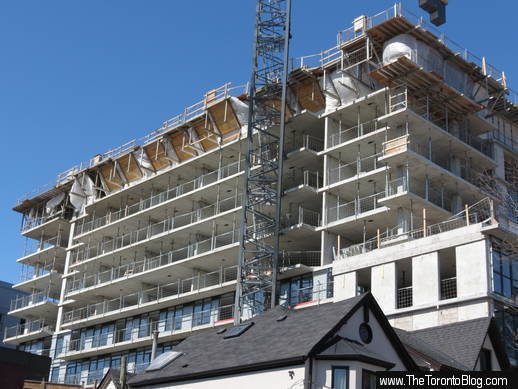 Another view of the south and east sides of the building 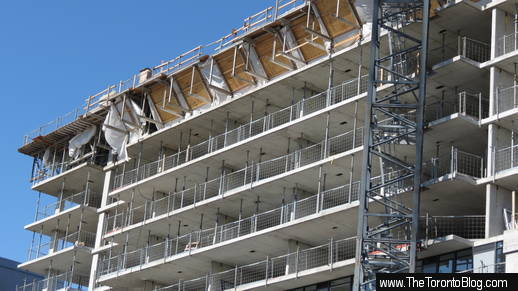 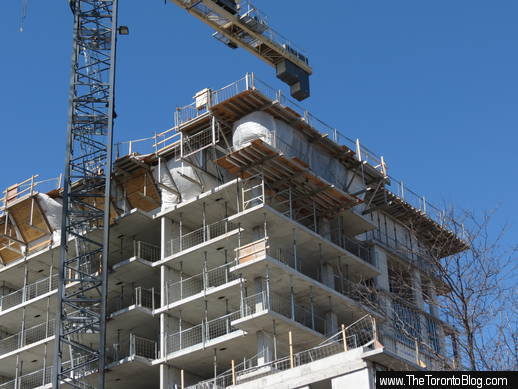 A view of the building’s upper southeast corner 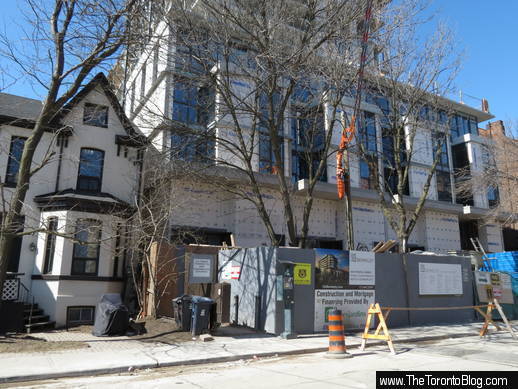 Street-level view of the building’s east side, where the entrance will be located. A city planning report said the height of the apartment building base is consistent with the height of adjacent buildings, while design details, floor levels and wall-to-window ratios also are consistent with houses to the south as well as the side of the Berkeley Church to the north. 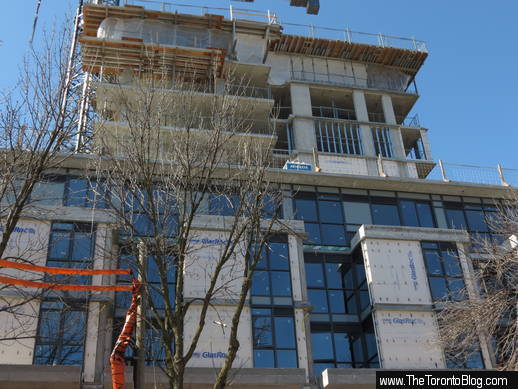 Looking up the east side of the building from Berkeley Street 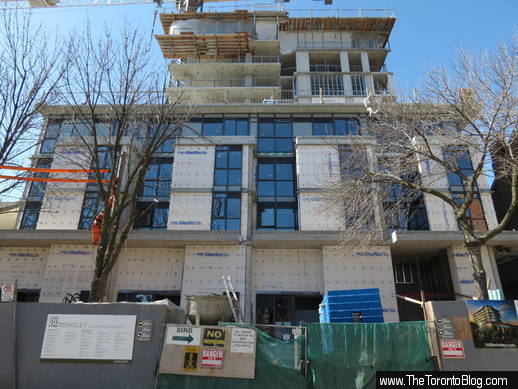 Only one of four white ash street trees on the Berkeley Street flank of the property had to be removed for construction. 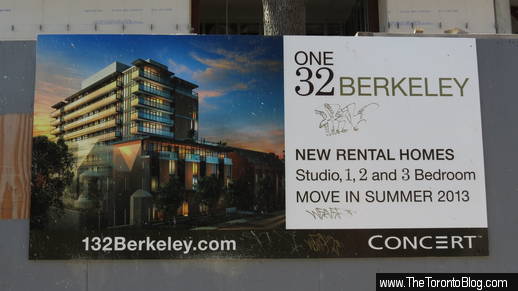 A promotional sign on hoarding along the Berkeley Street sidewalk 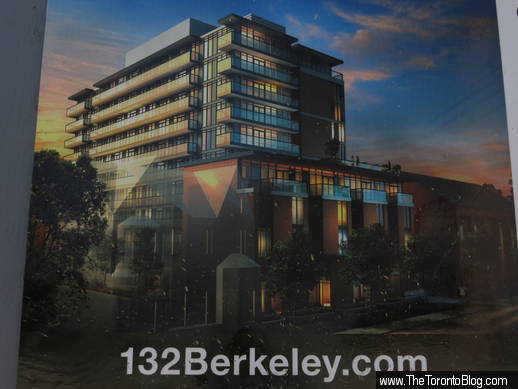 A closer view of the building illustration on the hoarding signage 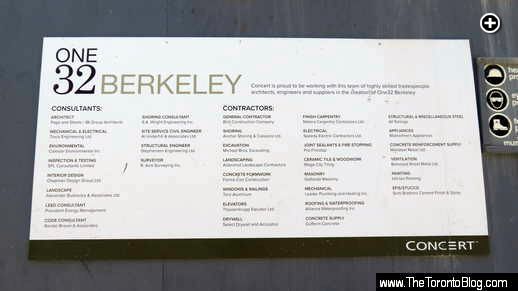 Another sign acknowledges all the members of the project team 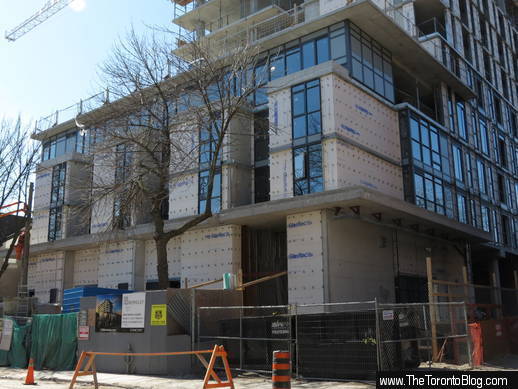 Ground-level view from the northeast, on Berkeley Street