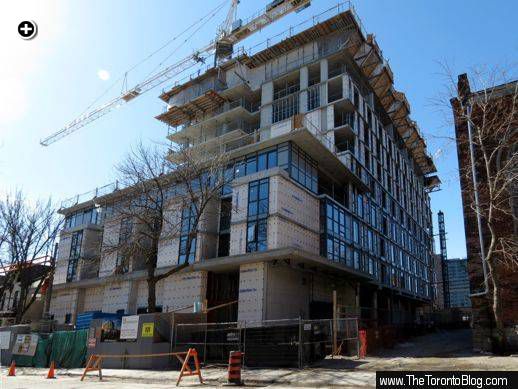 March 17 2013: Construction is underway on the top floor of the rental apartment building at 132 Berkeley Street. Windows have been installed on 4 levels so far.

Topping off: The project website and signs at the building site say summer move-ins are expected for the new One32 Berkeley rental apartment midrise in Corktown. But with construction still underway on the top floor, that might be a bit optimistic — unless Toronto’s dreary winter lingers longer than it’s supposed to.

Work was underway on the top level of the 10-storey building when I passed by on St Patrick’s Day, while window and cladding installation had reached the fifth floor.

The midrise building will offer 177 rental apartments in 1-, 2- and 3-bedroom configurations. Amenities will include a party room with outdoor terrace, a fitness studio and a library/meeting room. A 2-level underground garage will have parking for 72 vehicles as well as parking facilities for 180 bicycles.

A project of Concert Properties, One32 Berkeley was designed by Page+ Steele / IBI Group Architects. 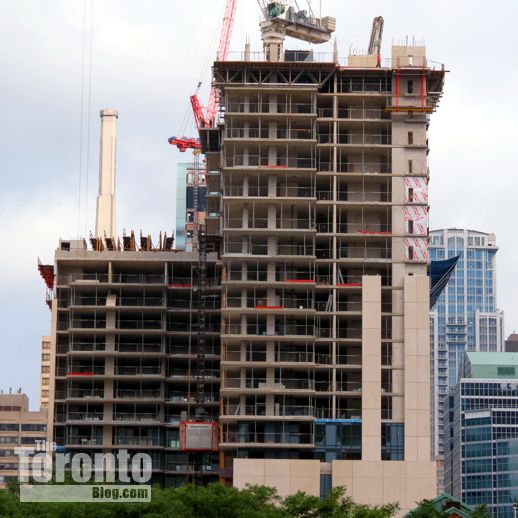 September 7 2012: A view of the Motion on Bay Street rental apartment highrise from atop the podium green roof at Toronto City Hall to the south 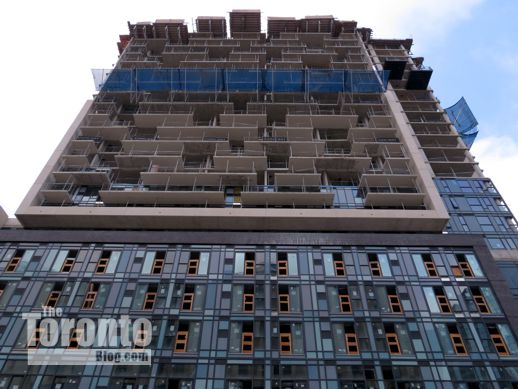 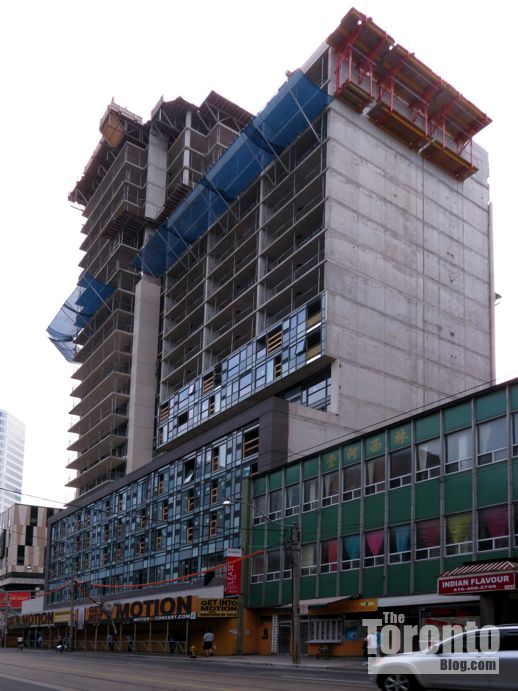 … and a view of Motion from the northwest, along Dundas Street

Photo update: Construction of the Motion on Bay Street rental apartment highrise has passed 20 storeys, on its way to a final floor count of 29.

A project of Concert Properties, the 463-unit building is scheduled for completion next spring. 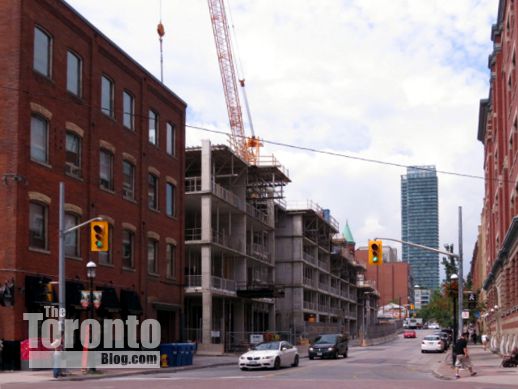 August 15 2012: Construction of The Berczy condo building viewed from the south at the intersection of Church Street and The Esplanade 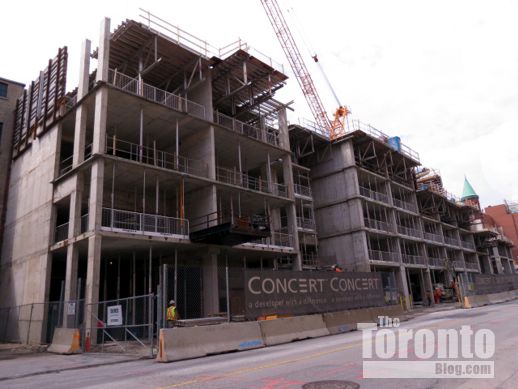 August 15 2012: Construction has reached four levels at the south end of the complex … 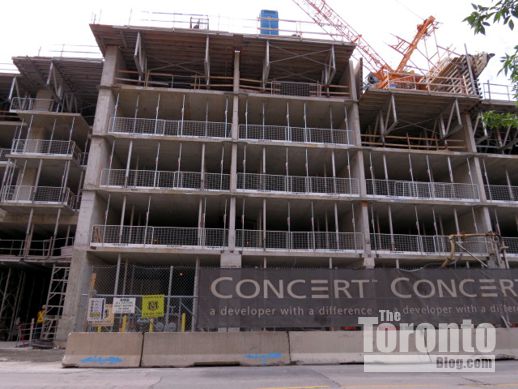 … five floors in the building’s midsection … 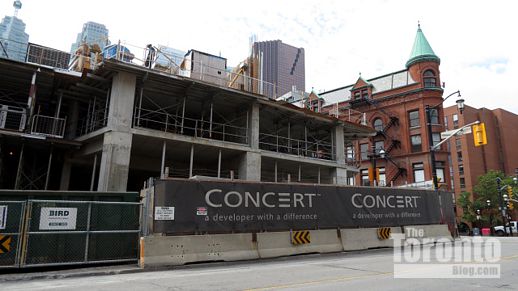 … and two floors along Front Street, across from the iconic Flatiron Building 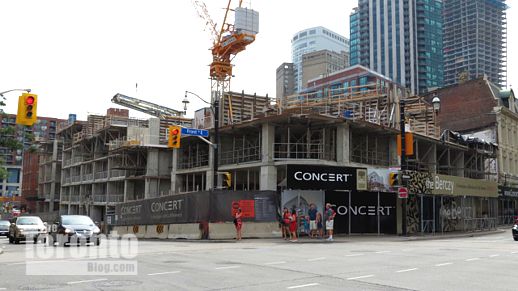 August 15 2012: Construction progress viewed from the northeast on Front Street 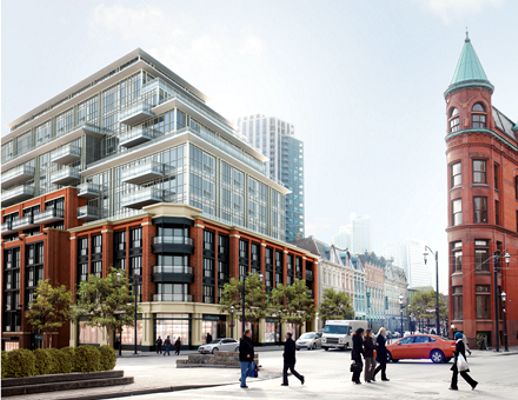 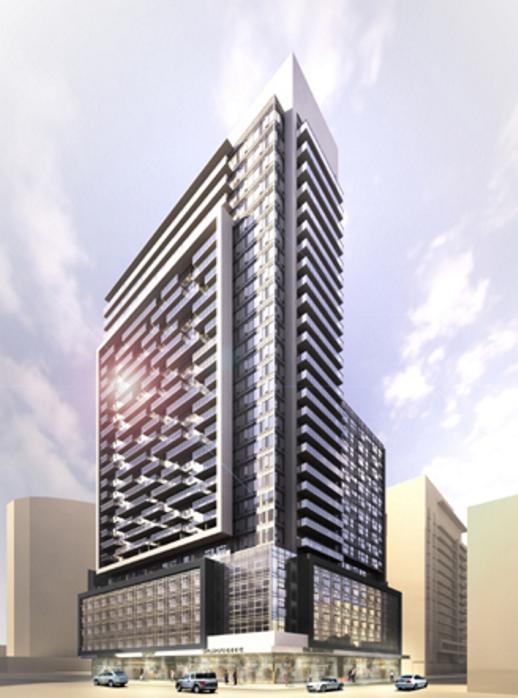 Now digging: The parking lot is long gone and the earth is starting to move at the southwest corner of Bay and Dundas, where Concert Properties Ltd. has begun building its latest rental apartment building, Motion on Bay Street.

The 29-storey tower will house 463 rental apartments (mainly studios and 1-bedrooms units) along with ground-level retail shops. The project’s website claims occupancy is anticipated for winter 2012, but that move-in date seems overly optimistic since site excavation is still just in the early stages.

I had been wondering how long it was going to take before a developer began building here, since Motion’s 570 Bay Street address is such a prime downtown location (the Eaton Centre and Ryerson University’s business school are right across the street; City Hall and the Financial District are a short walk to the south, and the hospital district is only two blocks north). It just didn’t make sense to maintain a parking lot on a piece of land worth millions of dollars.

A 50-storey condo tower originally had been proposed for this location as a sister to One City Hall, a 16-storey condo building at 111 Elizabeth Street that will be Motion’s next-door neighbour. However, the city would not approve the project since it would ruins views of Toronto’s beloved City Hall towers immediately to the south. The land was sold (at a huge loss, I heard) to Concert, which scooped it up with plans to build a shorter highrise that wouldn’t mar City Hall sightlines.

I knew construction was imminent when the property was fenced off in late summer; pile driving equipment arrived on scene in late fall and hoarding went up over the Bay and Dundas Street sidewalks in late October and early November.

Below are pics of the Motion on Bay Street site, including some shots from 2008. 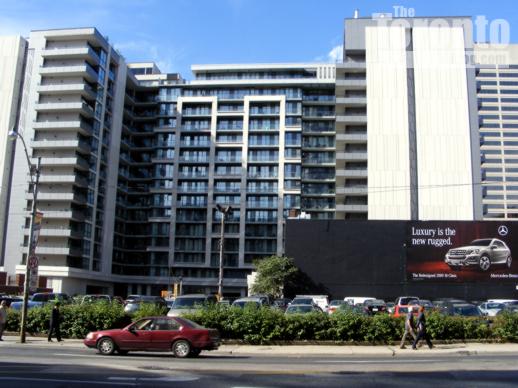 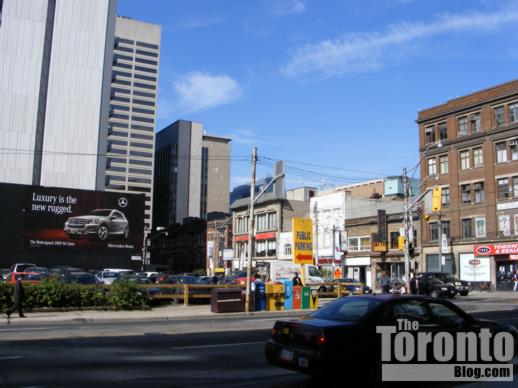 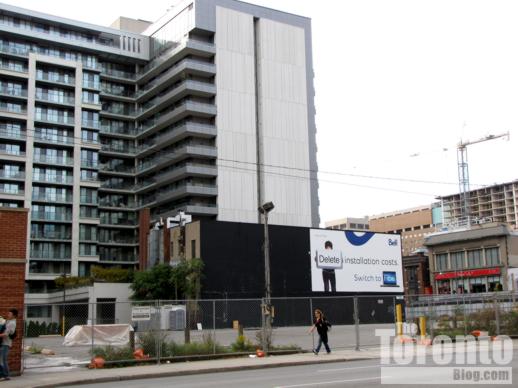 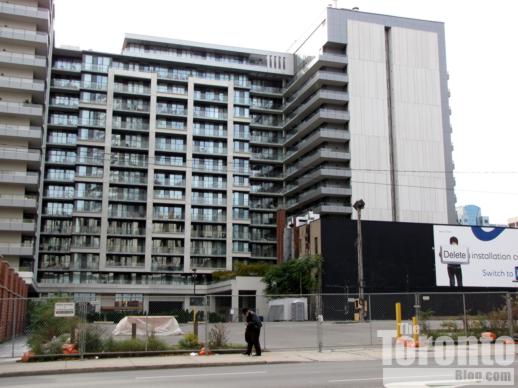 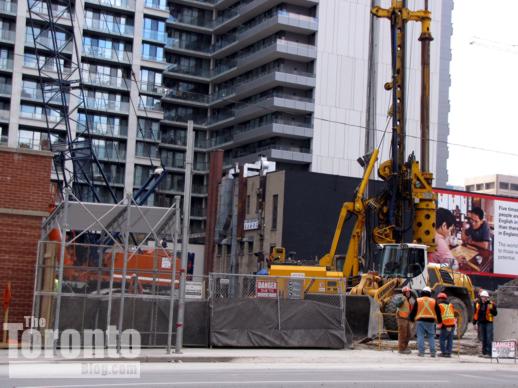 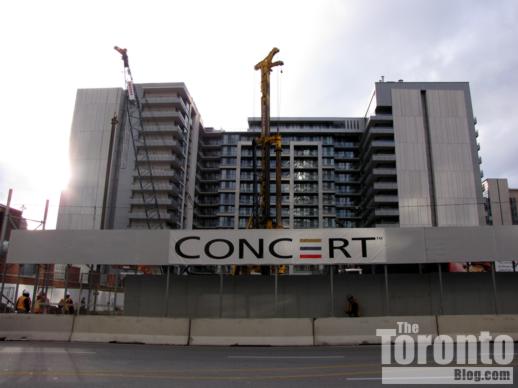 Hoarding along Bay Street on November 23 2010 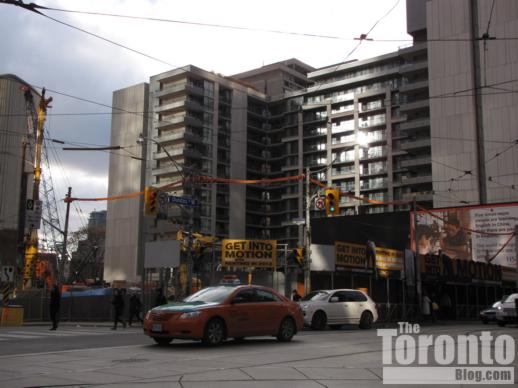 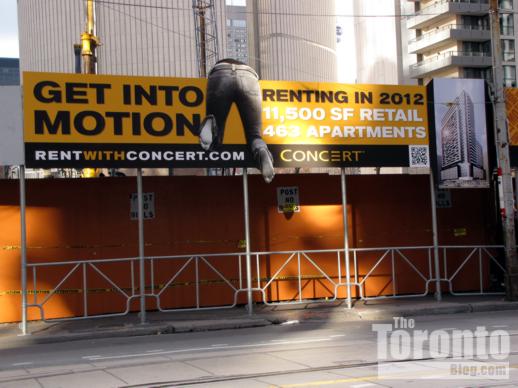 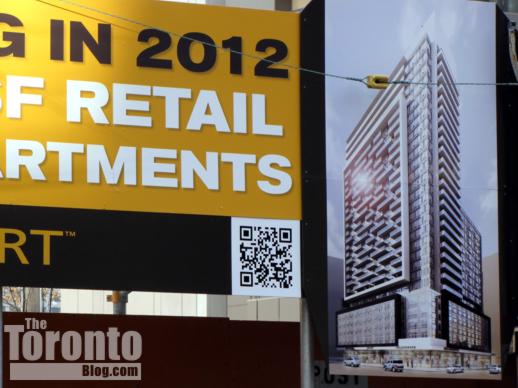 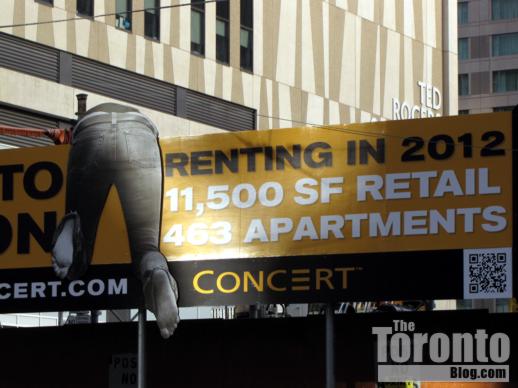 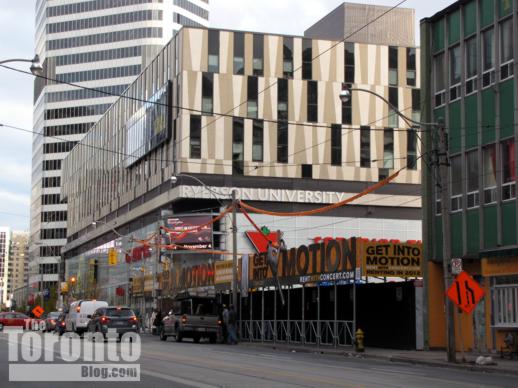 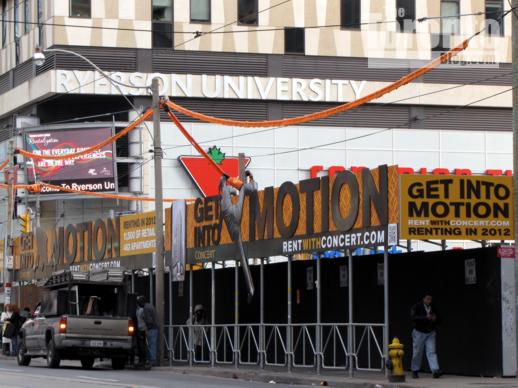 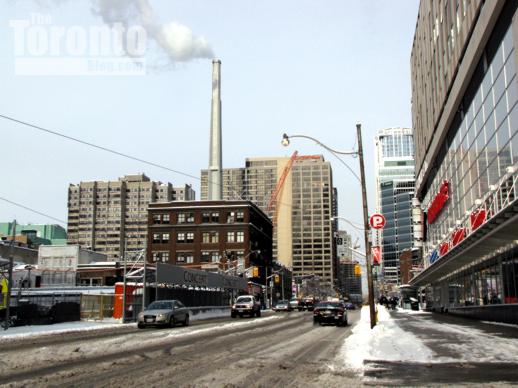 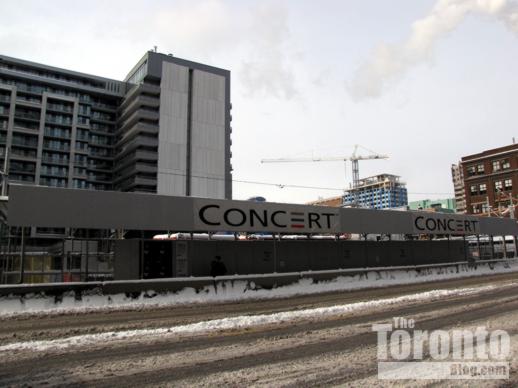 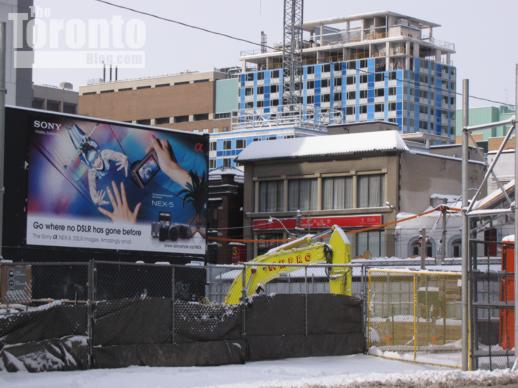 Yellow excavator digging away on January 8 2011 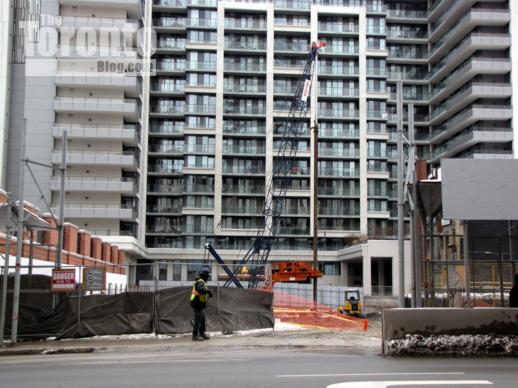