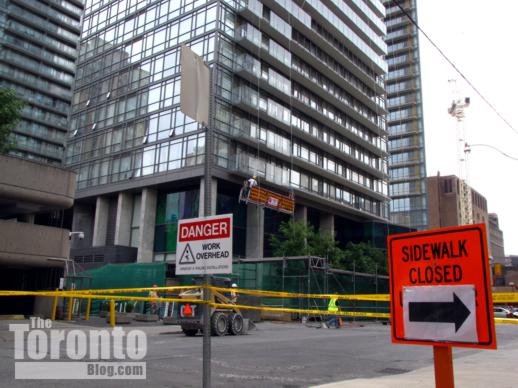 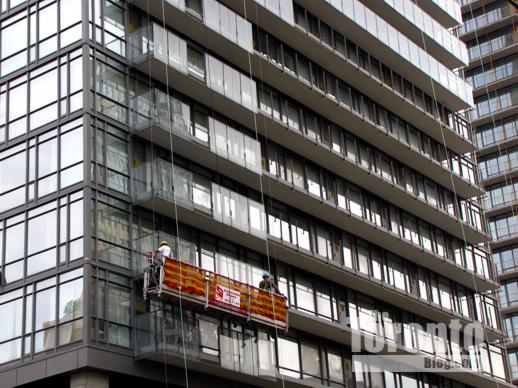 … as crews remove hundreds of glass panels from the building’s balconies. On orders from City inspectors, the developer is replacing all of the panels.

Balcony blues: Residents of the Murano north condo tower at 37 Grosvenor Street won’t be able to watch summer sunsets from the comfort of their balconies for the rest of the summer … and might not even be able to walk out onto them until sometime this fall. After two glass panels fell off balconies and smashed onto Grosvenor Street last Thursday, city building inspectors ordered Murano management to keep residents off their balconies until all glass panels have been removed and replaced, the Toronto Star reported. Murano’s builder, Lanterra Developments, began the remediation work immediately, and will foot what is bound to be a substantial bill for the project.

Last week’s incident marked the third time this year that glass panels have fallen from the highrise onto the street. In the latest mishap, panels plunged from north-facing balconies on the 18th and 35th floors. The panels fell around 2 p.m. on one of the hottest and most humid afternoons of the summer. Environment Canada data show that the temperature at Pearson International Airport at the time was 37.1 Celsius, while the Humidex reading was 48. Winds were around 35 km/h.

Fortunately, no-one was injured. Nevertheless, as I reported in my July 21 2011 post about the incident, Toronto police closed part of the street and lane below the Murano tower to all pedestrian and vehicle traffic as a safety precaution. They also required north tower residents and visitors to access and exit the building through the south condo tower at 38 Grenville Street, even though scaffolding had already been installed over the Bay and Grosvenor Street sidewalks adjacent to the north tower after a balcony panel fell from the tower’s upper south side in late June.

After inspecting the north tower, staff from the City’s building division issued an order requiring that all glass balcony panels in that particular building be replaced. According to the Star, the order demanded that building management “remove the glass balcony panels from the building, remove all contents from all balconies and secure all points of access to all balconies until the remediation is complete.”

As of yesterday afternoon, work crews had removed most of the glass panels on the lower seven rows of balconies, and the sections of Grosvenor Street and St Vincent Lane alongside the building still remained off-limits to pedestrians and vehicles.

Below are photos showing balcony panel replacement activity yesterday and on Sunday. 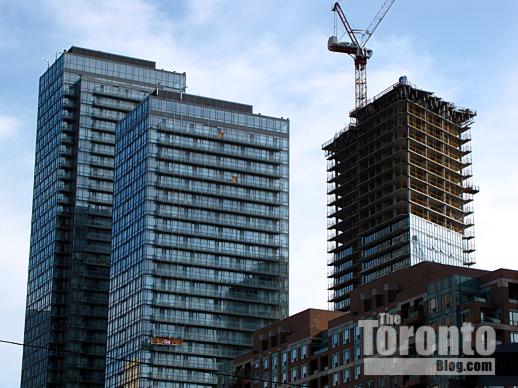 July 24 2011: Plywood panels are visible on two of the upper floor balconies of the north Murano condo tower in this view from Wellesley Street West. A swing stage carrying a work crew also can be seen on the lower left side of the building. 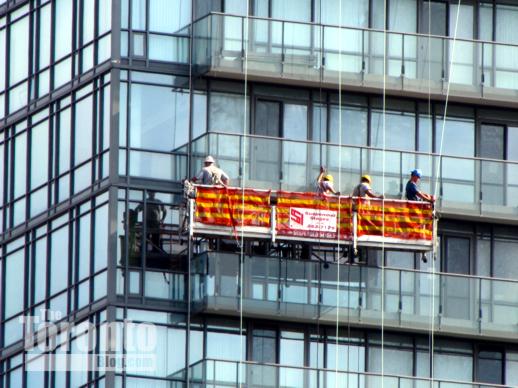 July 24 2011: A work crew inspects balcony panels from a swing stage near the northeast corner of the 37-storey tower 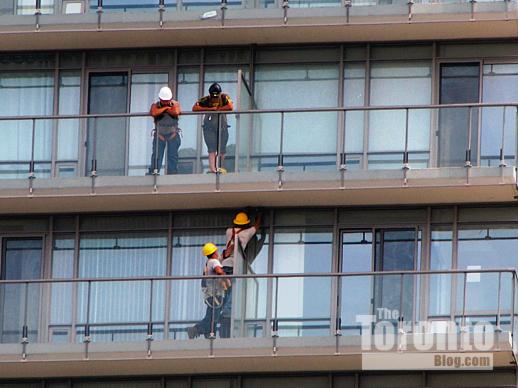 July 24 2011: Two contractors look down from one balcony while another crew works on the balcony below them 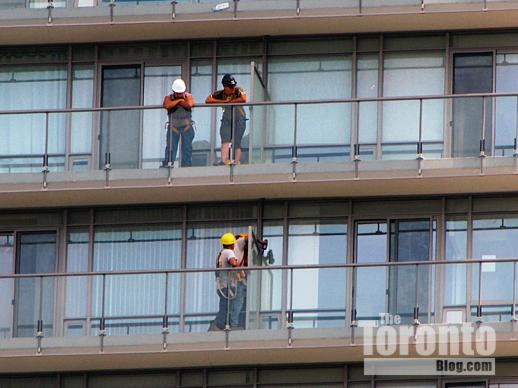 July 24 2011: The workers appear to be checking a glass balcony divider 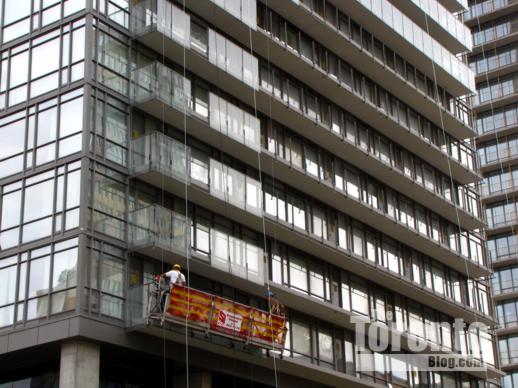 July 27 2011: A crew ascends the building exterior where dozens of glass panels have already been removed from the balcony railings 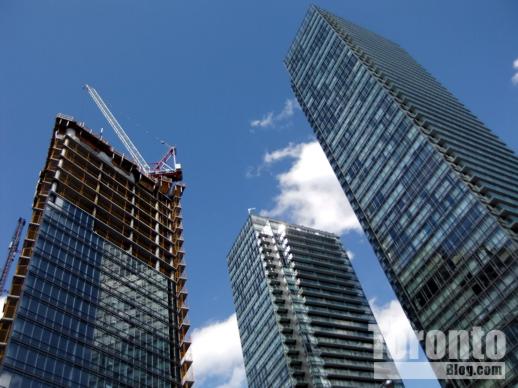 Catching up to its cousins: The Burano condo tower, left, is slowly but surely closing in on the height of the two Murano condo towers on the opposite side of Bay Street. When topped off at 48 floors, Burano will be the tallest of the bunch — Murano North is 35 storeys, while Murano South is 45. All three condo towers, seen here on March 25 2011, are projects of Lanterra Developments.