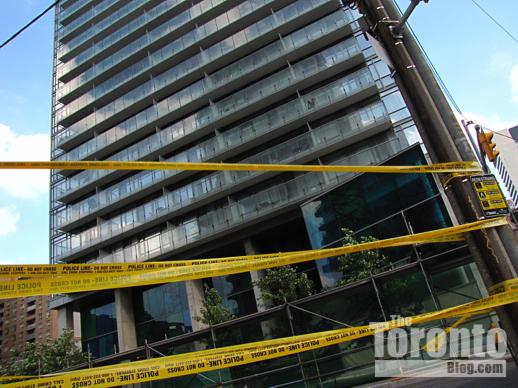 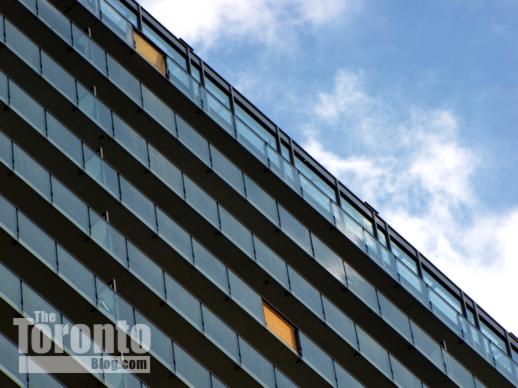 July 21 2011: Plywood sheets indicate where glass balcony panels have broken on the north side of the Murano North condo tower. The lower piece of plywood has been in place for at least a week. The upper panel shattered this afternoon. 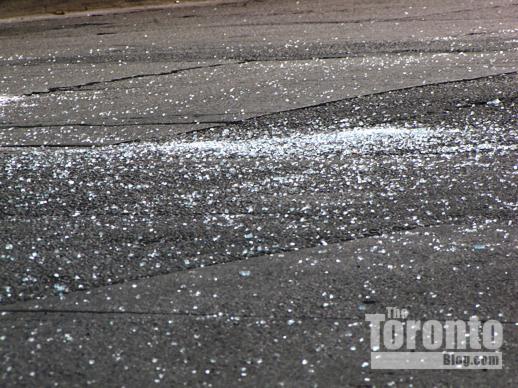 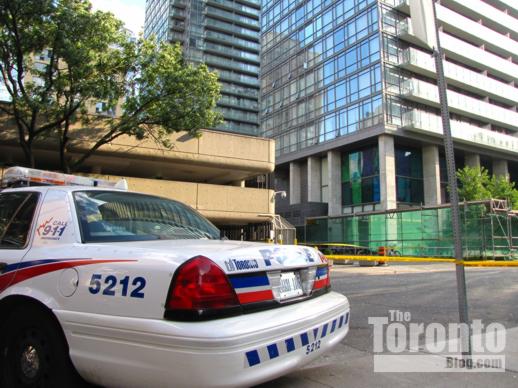 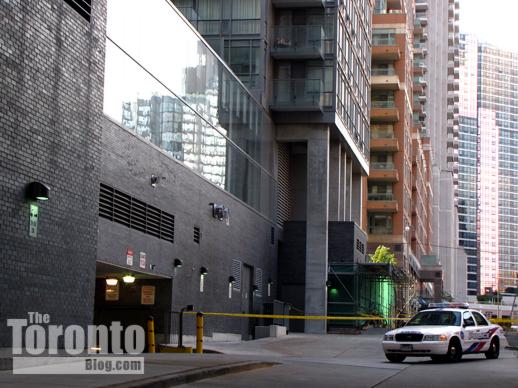 Murano glass rains again: Toronto police closed part of Grosvenor Street as a safety precaution today after at least one glass balcony panel on the North Murano condo tower shattered, raining thousands of pieces of tempered glass onto the road and sidewalk below. Police and building security guards also barred residents and visitors from entering and exiting the North tower’s front doors on Grosvenor, requiring them to use the South Murano tower entrance at 38 Grenville Street instead.

Today’s incident marks at least the fifth time that a balcony panel has broken and sprayed pieces of glass onto the streets and sidewalks below the two-tower complex on the east side of Bay Street, between Grosvenor and Grenville Streets. Exactly one month ago, I reported that the Bay Street sidewalk outside the Murano towers had been taped off after glass fell from a balcony on the upper south side of the North building. See my June 21 2011 post for full details and photos of that incident, along with links to other photos, posts and local news coverage reporting on previous incidents of balcony glass falling from the tower.

Early this evening I received word from Matt, a reader of TheTorontoBlog.com, that glass had fallen from the skyscraper yet again. “Another 2 panels fell out today, one in the alley way next to the condos and the other right on Grovesnor St from level 37,” he told me. (The Murano North tower is 37 storeys tall; the South tower has 45 floors.)

I grabbed my camera and walked over to take a look. Just as Matt had advised, police had completely blocked vehicular and pedestrian traffic on Grosvenor Street, from the west side of the YMCA building over to Bay Street, as well as along St Vincent Lane — an alley which runs between Grosvenor and Grenville Streets on the east side of the Murano complex. Tiny pieces of broken tempered glass littered the concrete sidewalks and asphalt road surface throughout the closed-off area. I saw people standing on several North Tower balconies, leaning against the railings while watching the police and pedestrians on the street below them.

Over at the northeast corner of Bay and Grosvenor, two security guards were busy looking up and warning people to get off their balconies and go back inside their condos. “Get inside! Get off the balcony! Get away from the balcony!” one of the guards screamed at a woman leaning over a balcony about 15 floors high.

When I approached a policeman and one of the security guards and asked if anyone had been hurt by the falling glass, the officer just shrugged and said he didn’t know. The security guard, pointing to scaffolding that covers the Grosvenor Street sidewalk outside the condo building, said he didn’t think there had been any injuries. (A work crew had been installing additional scaffolding over the sidewalk when I walked past Murano on Tuesday morning.)

I also asked if more than one balcony panel had broken, since I couldn’t see any signs of a broken panel on the east side of the condo complex above St. Vincent Lane. However, neither the security guard nor the police officer knew if more than one panel had shattered. (A story in tonight’s online edition of the Toronto Star says that glass from two separate balconies fell to the ground.) As well, neither man knew if the condo management or developer would be taking steps to inspect and/or replace every balcony panel on the building. They also didn’t know how long the street and sidewalks were expected to stay closed; however, the Star story says the road will be closed until Monday.

As a result of today’s incident, I’m willing to bet that scaffolding will remain on the sidewalks around the Murano buildings for the rest of the summer, if not longer, while the cause of the glass breakage is investigated.

Murano isn’t the only downtown highrise building that has experienced problems with breaking balcony panels. As I reported in a February 2 2011 post, at least one panel has broken on the 46-storey Casa condominium tower on Charles Street East. And just a couple of weeks ago I spotted a piece of plywood on a balcony at one of the new apartment buildings in Regent Park; photos of that appear below. Also below are additional photos of the Murano condo from this evening and recent weeks. 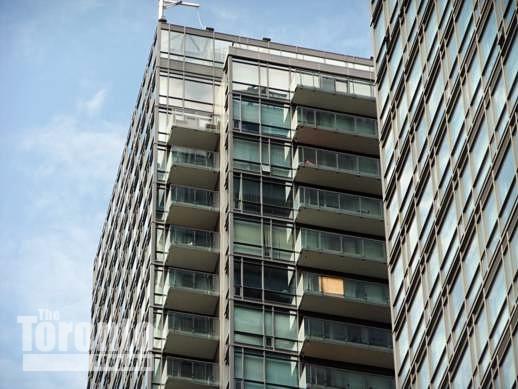 June 26 2011: A piece of plywood replaces a balcony panel on the upper south side of the Murano North condo tower 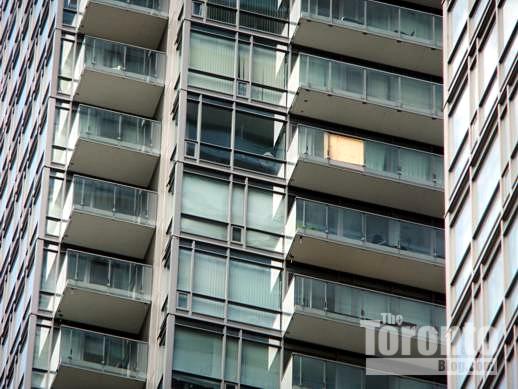 June 26 2011 : A closer view of the missing balcony panel on the north tower 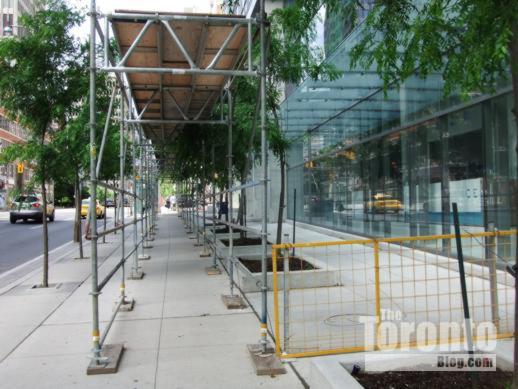 June 26 2011: Scaffolding on Bay Street outside the Murano condos 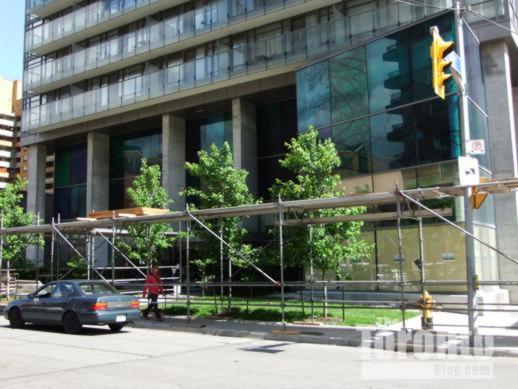 June 26 2011: Scaffolding on Grosvenor Street outside the Murano north tower 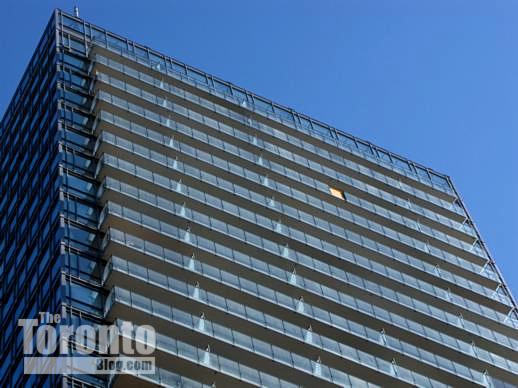 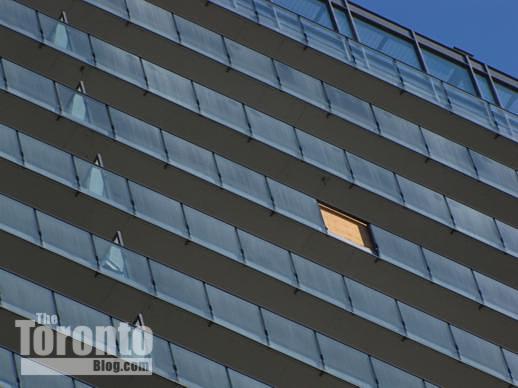 July 15 2011: Another view of the panel missing on the north tower’s north side 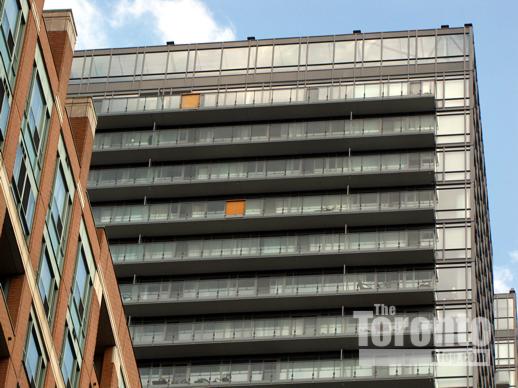 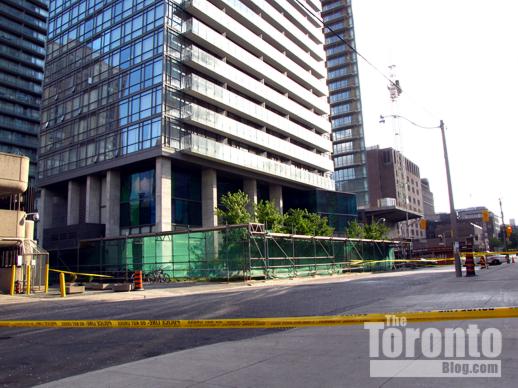 July 21 2011: The closed section of Grosvenor Street outside the Murano tower 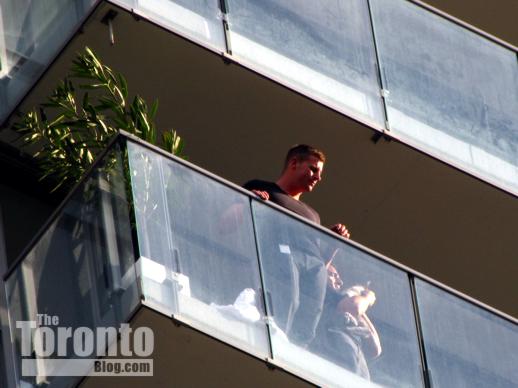 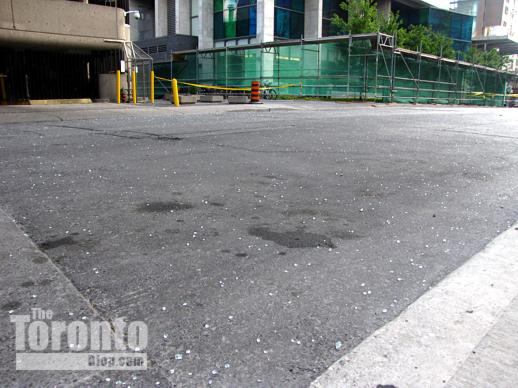 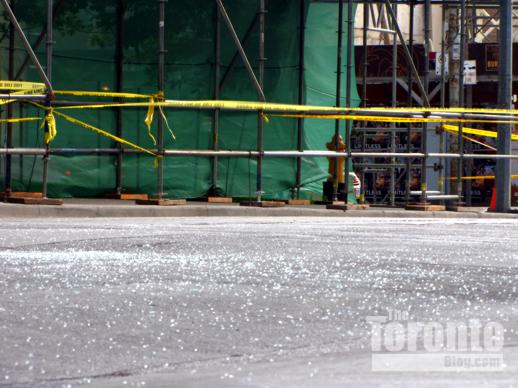 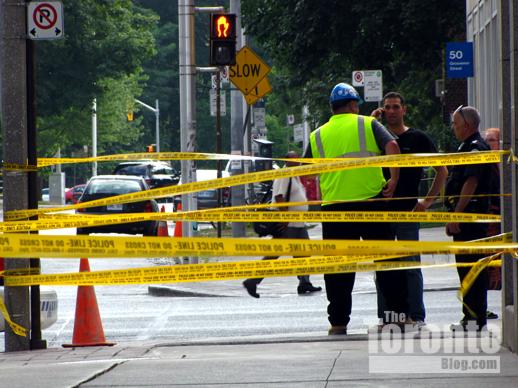 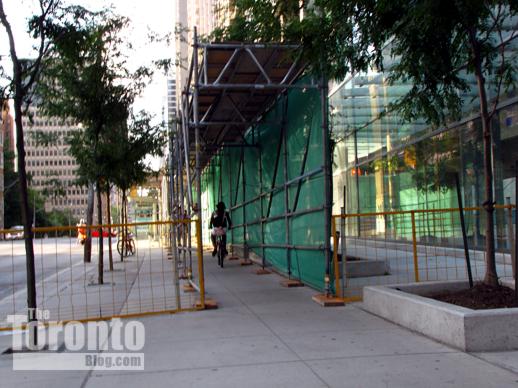 July 21 2011: Scaffolding and barricades along the Bay Street sidewalk outside the Murano condo towers 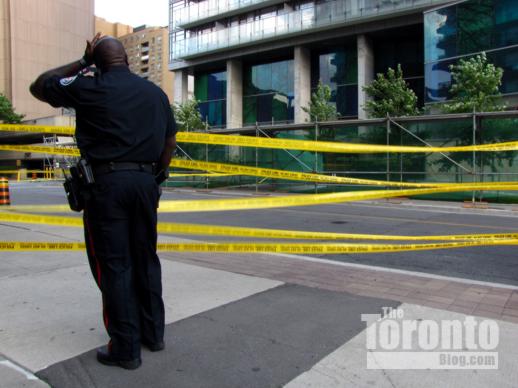 July 21 2011: A police officer and tape at the corner of Bay and Grosvenor 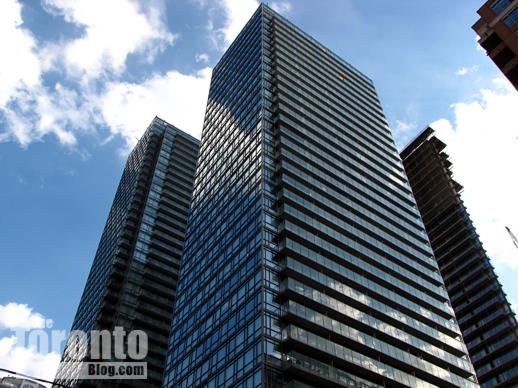 July 21 2011: Looking up at the Murano condo towers from Grosvenor Street 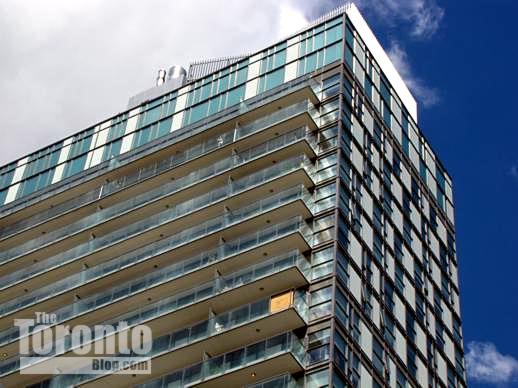 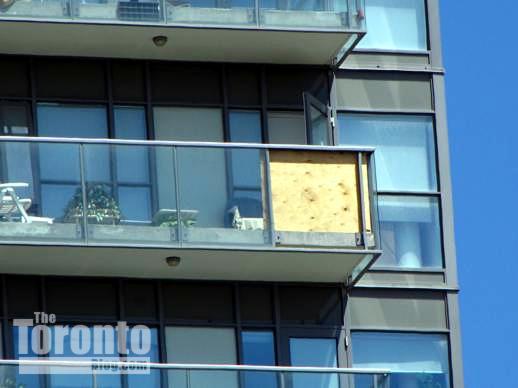 July 13 2011: A closer view of the missing panel on the Regent Park  balcony