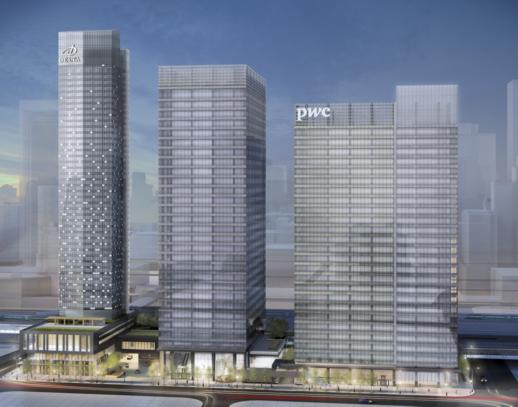 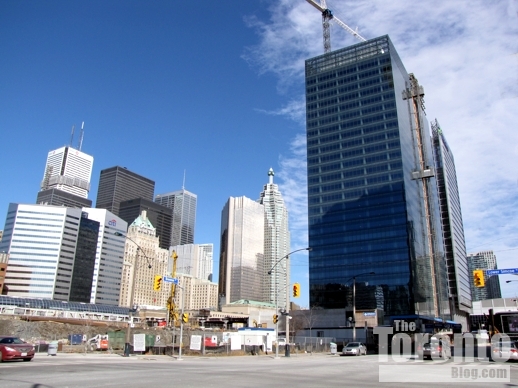 …and a southeast view of the Centre as it appeared on February 18. The 26-storey PricewaterhouseCooper head office building at 18 York Street (right) is nearing completion, but excavation is still in early stages for the Delta Toronto hotel and Bremner office tower office still to be built.

Trackside towers: As downtown’s newest office tower approaches the end of construction, site excavation has only just begun for its two younger siblings, who will gradually grow into prominent hotel and office towers standing proudly right next door.

Work on the 26-storey PricewaterhouseCooper (PwC) office building at 18 York Street is winding down, and occupancy for most of its floors is scheduled for the third quarter of this year. (Four and a half floors of the PwC tower, which is 86% leased, won’t be ready for occupancy until early in 2013.)

Meanwhile, crews are preparing to build downtown’s next new highrise hotel, the Delta Toronto, as well as the city’s next new office block, the Bremner Tower, on lands along Bremner Boulevard just west of PwC.

But this young family of buildings, formally known as the Southcore Financial Centre (SFC), is already having a major impact on the city. Along with some newer neighbours (Telus Tower and Maple Leaf Square) who recently took up residence nearby,  SFC is changing the look of the skyline and railway lands while at the same time drawing the Financial District to the south side of the train tracks.

And with construction currently underway for the ÏCE and Infinity3 condo towers just one block to the south, and construction expected to start later this year on the Ripley Toronto Aquarium one block to the west, this formerly derelict railway lands district is being transformed into a bustling and vibrant urban neighbourhood.

Sometimes I still can’t believe this is happening. Before I even moved to Toronto in the early 1980s, politicians kept promising new office and residential developments would revitalize the ugly railway lands between Union Station and Lake Shore Boulevard. As is typical for Toronto, it took so long for things to get going, I never thought I’d see construction actually get underway. But it has been happening, and the pace of transformation from blight to bright has been phenomenal.

For years, there wasn’t much more than a few parking lots and dusty, vacant fields on the vast swath of land stretching from the CN Tower in the west to the old Canada Post building at the corner of Bay Street and Lake Shore Blvd., in the east. Then the Air Canada Centre opened in 1999, followed in late 2005/early 2006 by the 35- and 16-storey Infinity condominium buildings at the corner of Bremner and Simcoe.  Last year, both the Telus office tower and the Maple Leaf Square condo/office/hotel/retail complex opened on the east side of York at Bremner. This year, condos, offices and a hotel are under construction, and a major tourist attraction will be joining them soon. Whew! Three years from now, I might not even recognize the neighbourhood!

But let’s get back to Southcore, the new kids on the block bounded by Lower Simcoe Street to the west, Bremner Blvd. to the south, York Street to the east, and the railway tracks to the north. The Delta Toronto will be a 45-storey, 566-room, four-star hotel standing at the corner of Bremner and Simcoe, conveniently just across the street from the Metro Toronto Convention Centre. The 30-storey Bremner Tower will sit between the Delta and PwC, on Bremner Blvd.

When I walked around the area last week, a construction crew and pile driver were working along the north perimeter of the site, right next to the rail tracks. Below are some pics I snapped from street level and from the Convention Centre stairs, along with some hotel and office tower renderings from the Southcore Financial Centre website. 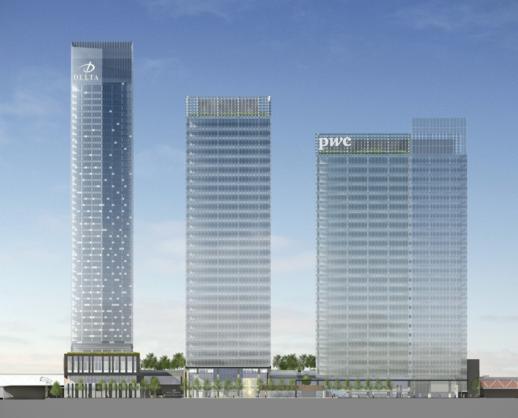 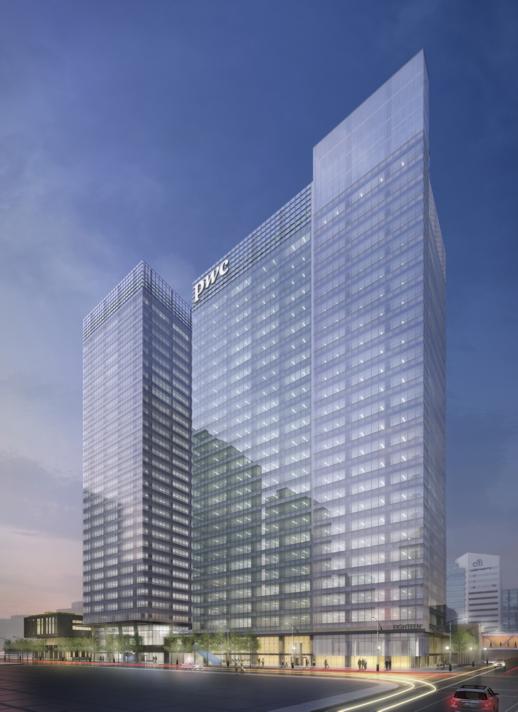 Rendering of the Southcore Financial Centre towers viewed from the southeast 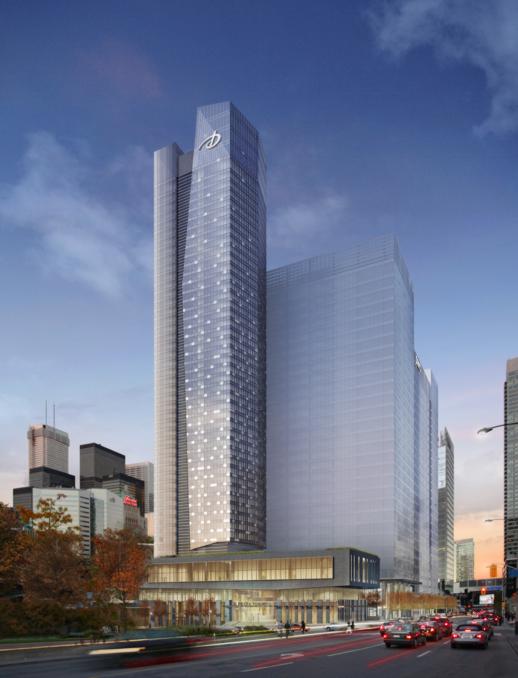 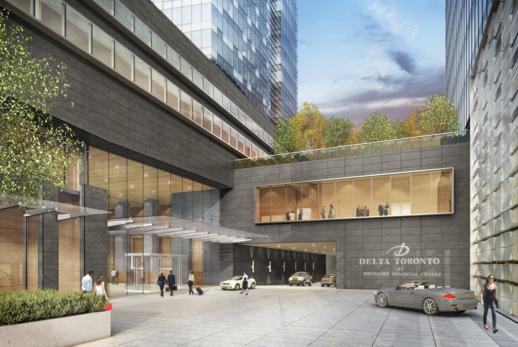 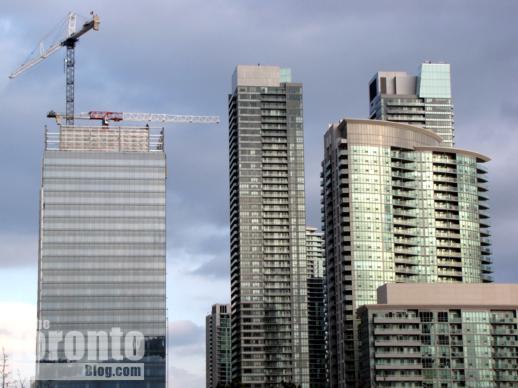 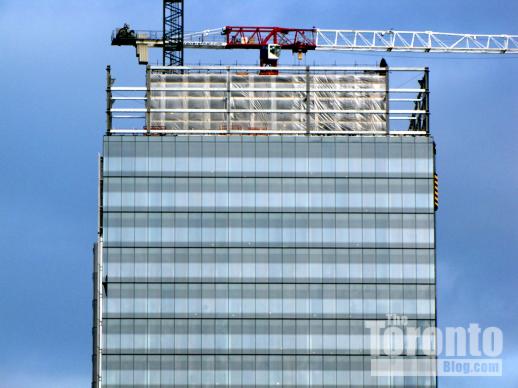 January 3 2011: The top floors of the west side of the PwC office tower 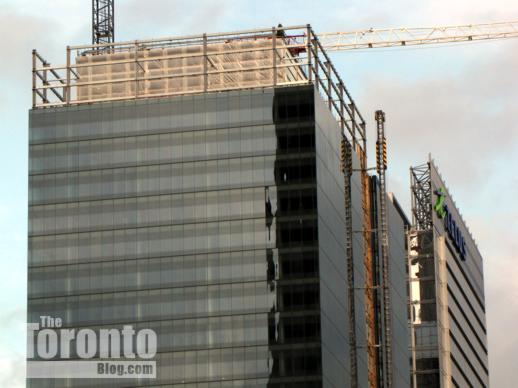 January 3 2011: Southwest view of the PwC tower and Telus Tower 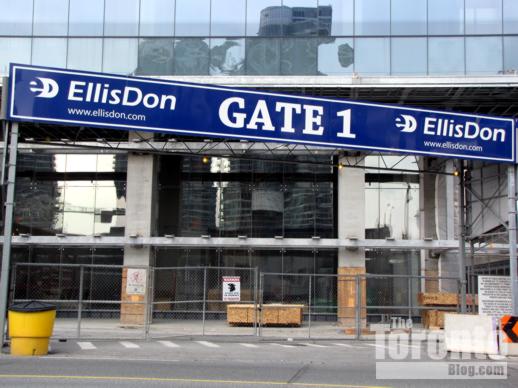 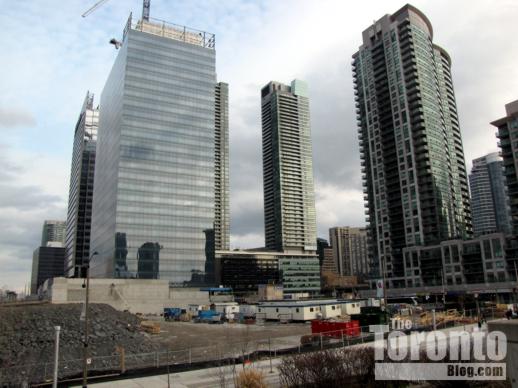 January 3 2011: Northwest view of the Southcore Financial Centre location for the Delta hotel and Bremner Tower. Overlooking the site are the PwC tower and Telus Tower at left, Maple Leaf Square towers (center), and the Infinity condos. 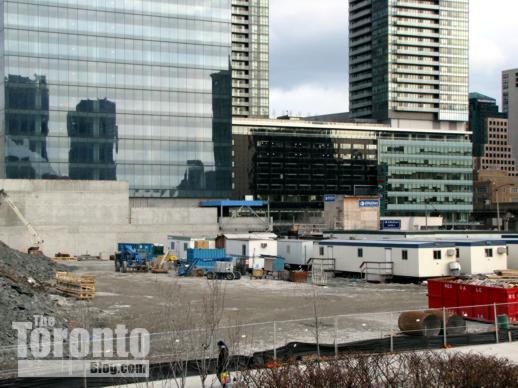 January 3 2011: Trailers and dumpsters on the hotel and office tower building site 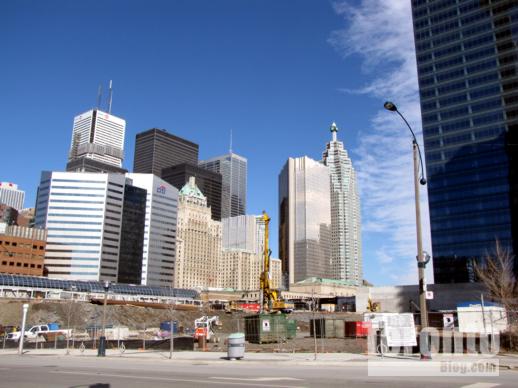 February 18 2011: Delta Hotel and Bremner Tower site viewed from the southwest corner of Bremner Blvd and Lower Simcoe Street. Once built, the two towers will completely block this view of the Financial District skyscrapers. 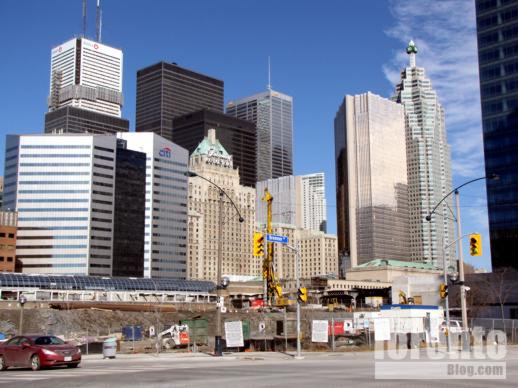 February 18 2011:  Another view of the hotel and office tower building site 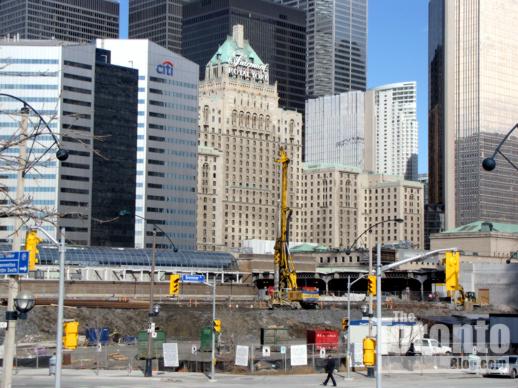 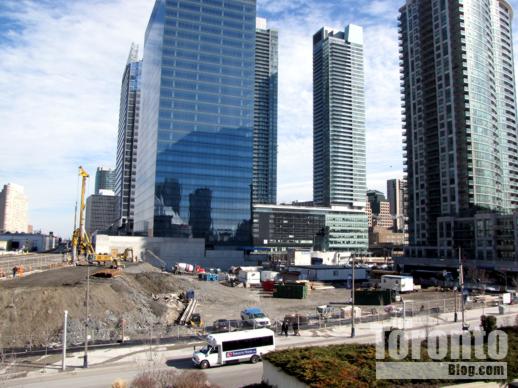 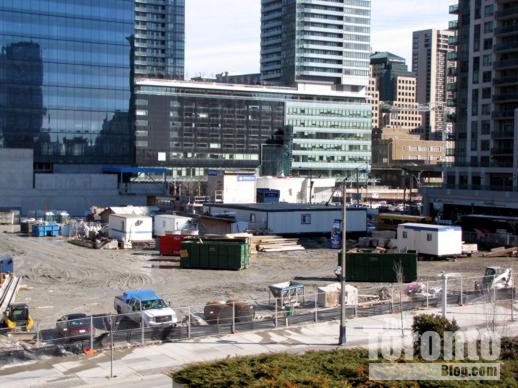 February 18 2011: Another convention centre view of the building site 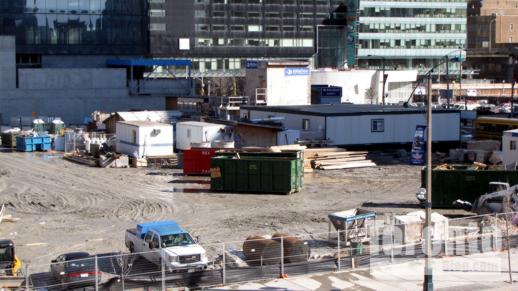 Within months, full-scale excavation of this site will be in progress 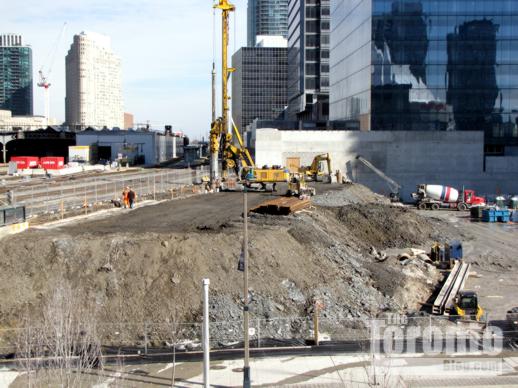 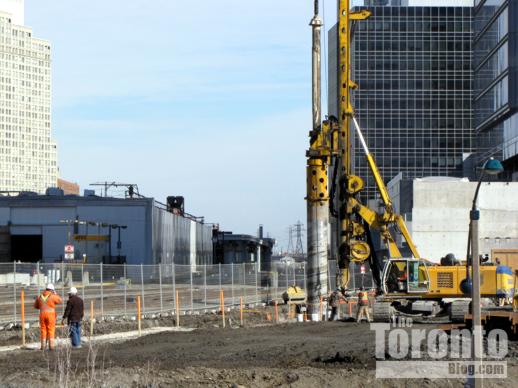 While the pile driving machine prepares the Southcore site for excavation, another huge construction project is underway nearby — the Union Station railway platform revitalization project (the covered area at the rear left side of the photo). 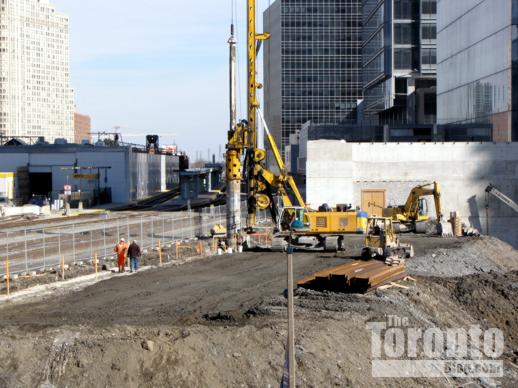 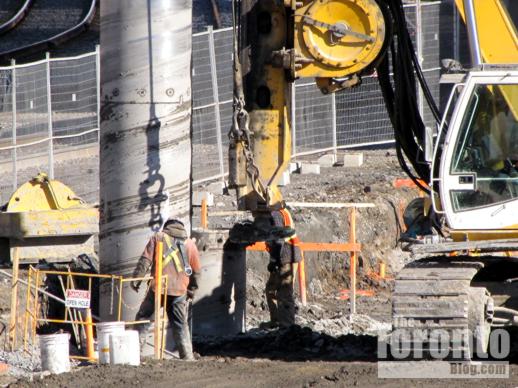 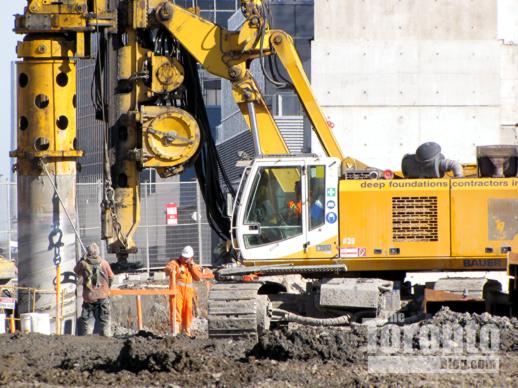 A closer look at the foundation-building machine 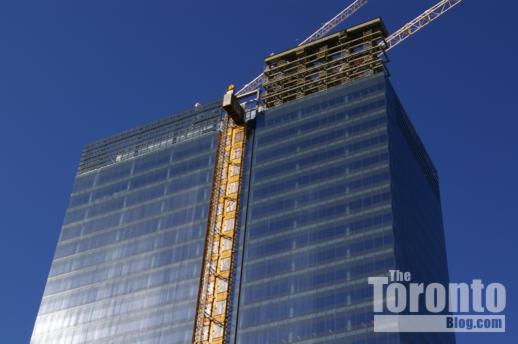 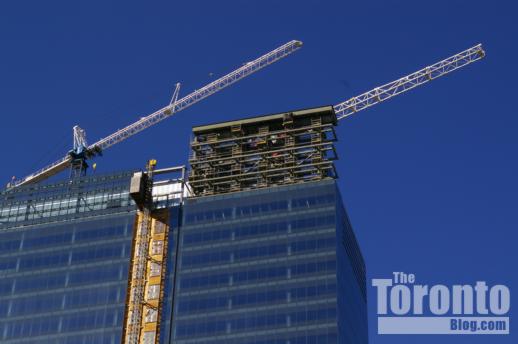 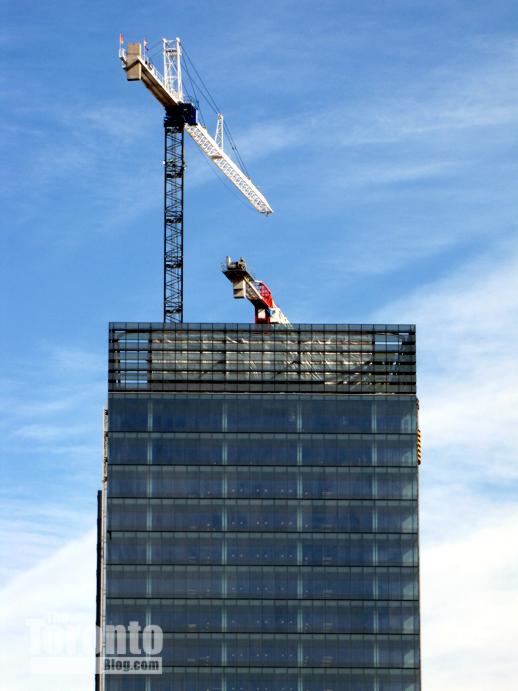 February 18 2011: Simcoe Street view of the cranes atop the PwC office tower 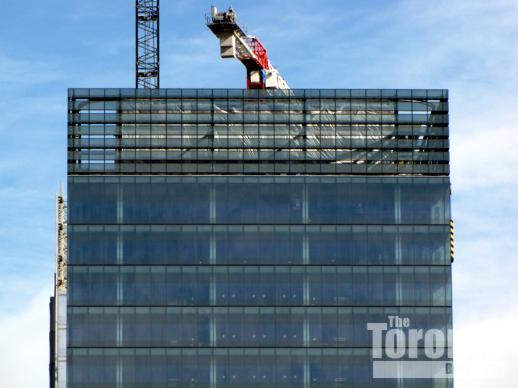 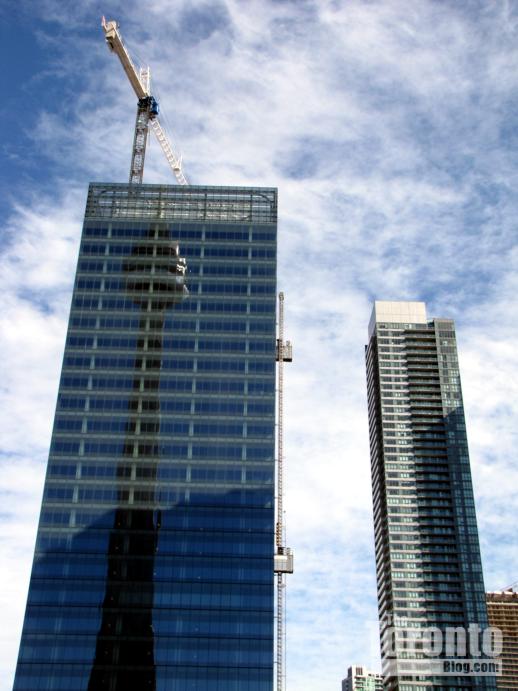 February 18 2011: A Simcoe Street view of the CN Tower reflecting in the west windows of the new PricewaterhouseCoopers office building.