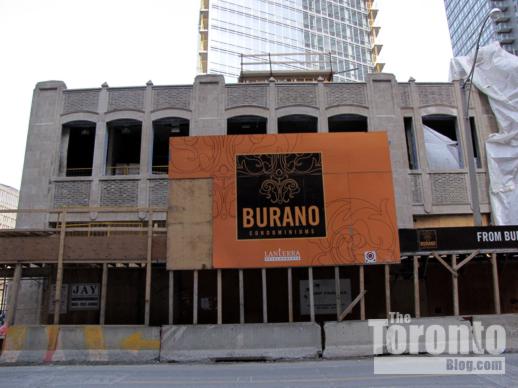 Part of the reconstructed Addison on Bay building was revealed this week when protective wrapping was removed from the facade on Grenville St. 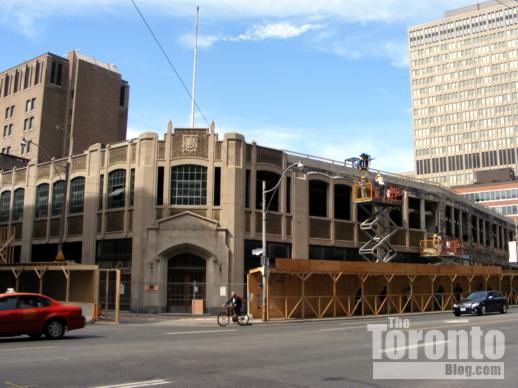 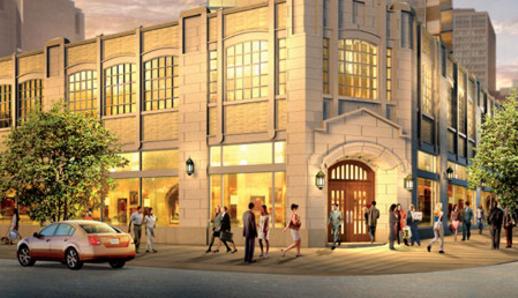 Addison’s back on Bay! The Addison on Bay Cadillac dealership closed four years ago, and the historic Addison building itself completely disappeared from the landscape during late 2008 and early 2009. But the building is right back where it had operated as a car dealership since 1925 — only now it’s going to have an entirely new life and function as part of the Burano luxury condo complex currently under construction.

The Addison showroom at 832 Bay Street was designated a historical property by the City in 1999. The dealership continued in business for another eight years after that, but finally shuttered its doors in the middle of March 2007. Despite its prominent, lengthy history downtown, the dealership was forced to close the Bay Street business because of “economic factors, including the increasing cost of maintaining a central downtown location,” dealership president Clarke Addison explained in a letter to customers. (Further details about the Addison site and the demise of the downtown dealership were reported in a Toronto Star story published on March 2, 2007.)

But the Bay Street property wouldn’t sit idle for long.

Lanterra Developments ultimately acquired the properties on both sides of Bay, and built the two-tower Murano condo complex on the east side. Since the summer of 2008, it has been building Burano on the west property. During the fall and winter of that year, the Addison showroom was dismantled so the site could be excavated for the condo tower. Once the foundation for the new complex had been built, reconstruction of the Addison building commenced.

Protective sheeting has blocked the facade from public view for the past three months, but a section of wrapping was removed from the Grenville Street wall of the structure late last week.

Below are some pics I took while the Addison building was being dismantled and then re-assembled. There’s also some pics of the newly revealed Addison facade on Grenville Street, along with other recent photos showing construction progress on the Burano condo tower. An album of Burano pics from the beginning of construction to this month can be viewed on the Photo Sets page of the blog. 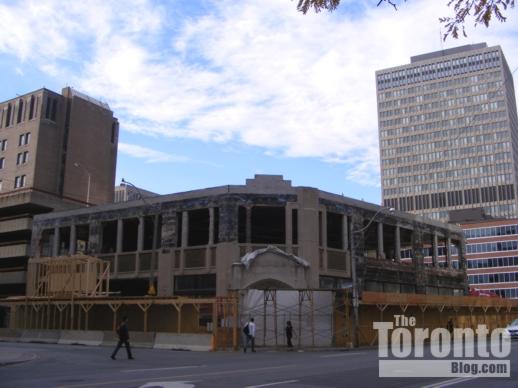 October 13 2008: The Addison on Bay building gradually being dismantled 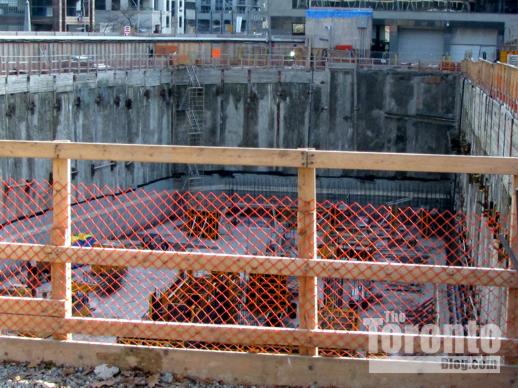 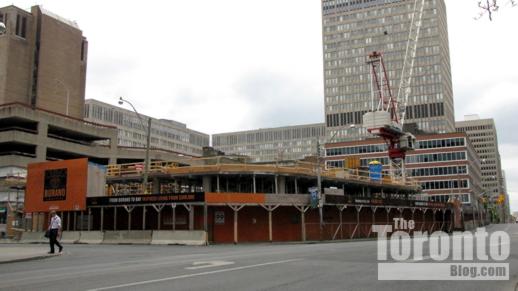 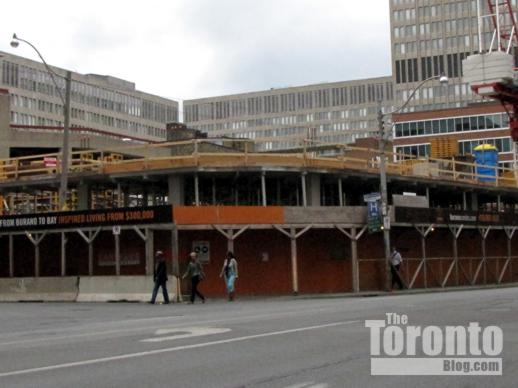 May 2 2010: Another view of the Addison building reconstruction progress 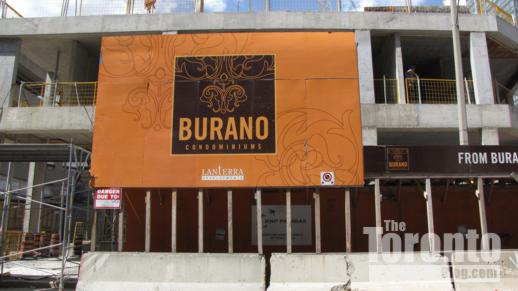 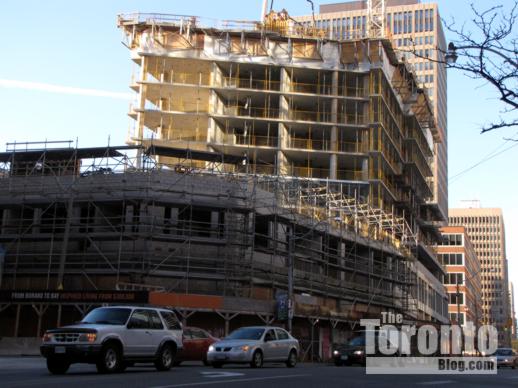 November 9 2010: Rebuilding progress before the structure went under wraps 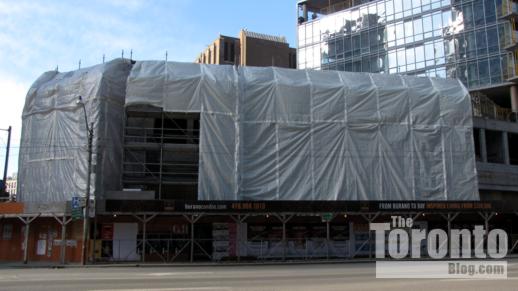 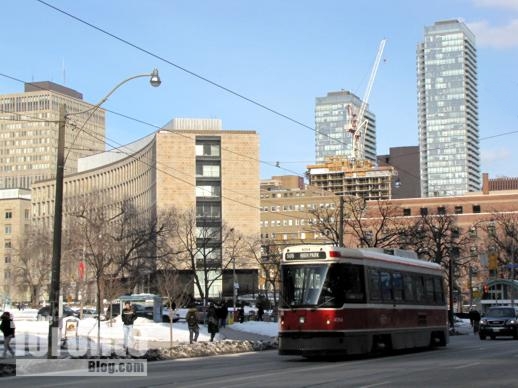 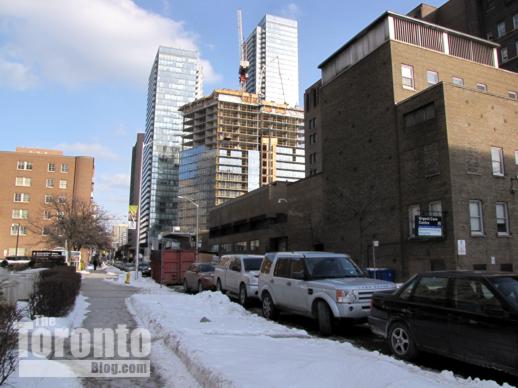 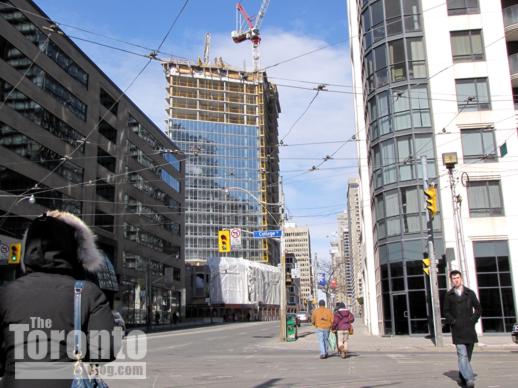 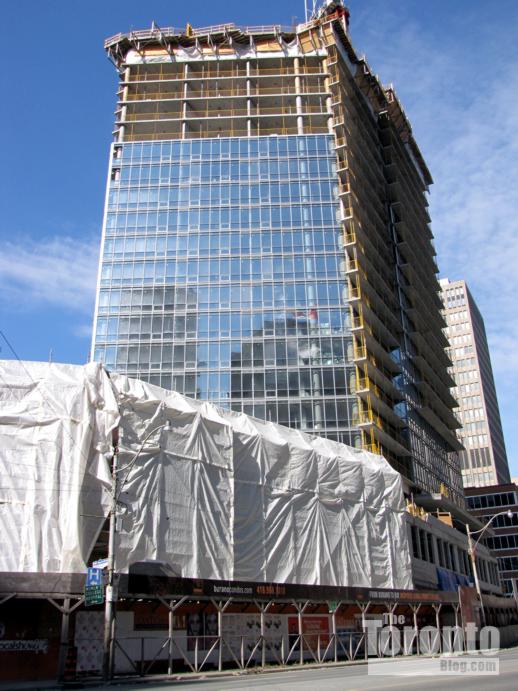 February 20 2011: Burano viewed from southeast corner of Bay and Grenville 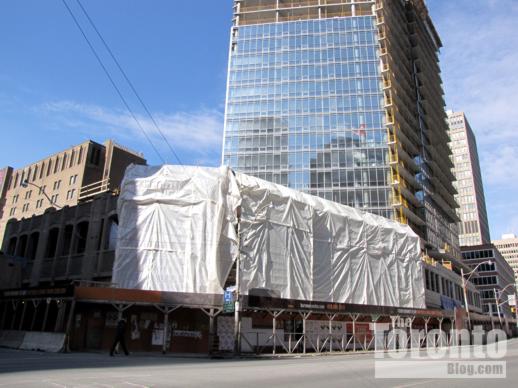 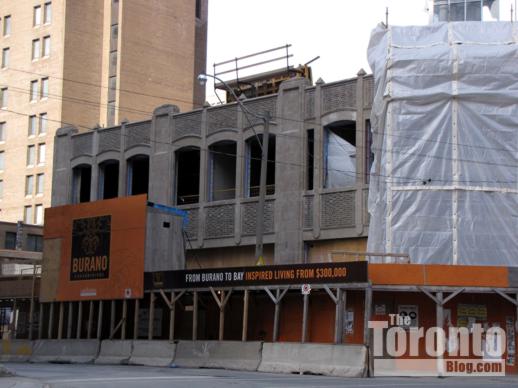 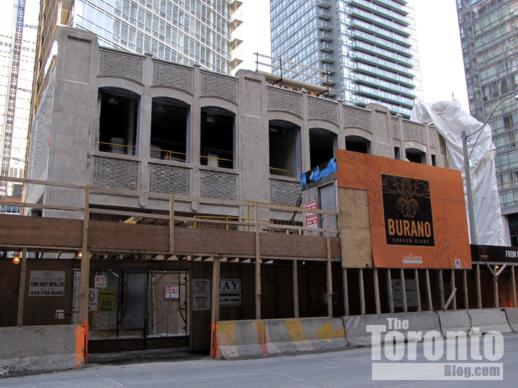 Another view of the reconstructed Addison facade on Grenville