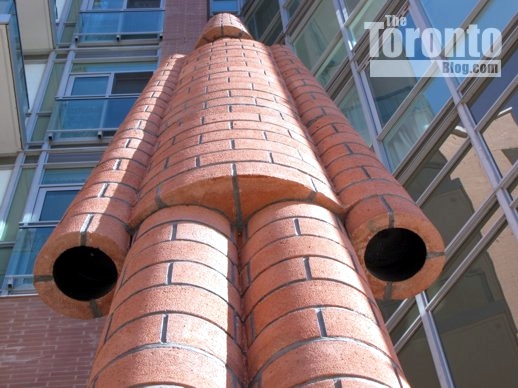 Brickbats for the Brick Man: The Brick Man sculpture that stands sentry outside the Jarvis Street entrance to the Vü condominium complex seems to take a lot of flak.

When I was shooting Brick Man’s picture last November, several passersby were quick to comment on how “hideous,” “awful,” and “ridiculous” they thought he looks. And when I was standing next to Brick Man one evening in January, chatting with a friend who lives in Vü, a young woman heading into the condominium said: “Isn’t that the ugliest thing you’ve ever seen?”  Her companion thought the sculpture was “a joke.”

From certain angles and in certain lighting I think he looks cool, but other times he does look cheap, tacky, or toy-like, and simply doesn’t suit the spot where he has been installed. Perhaps he’s not appreciated because he’s been put in the wrong place (though I’m not sure just where, on the Vü property, he might look better).

Clearly, he’s one of those public art installations that people will either love or absolutely hate. Like the Eldon Garnet wildlife sculptures at James Cooper Mansion on Sherbourne Street, which have drawn sharp criticism here in the blog since I posted their pics a month ago.

Either way, Brick Man looks like he’s a strong, thick-skinned guy, and I’m sure he can handle anything that gets thrown his way.