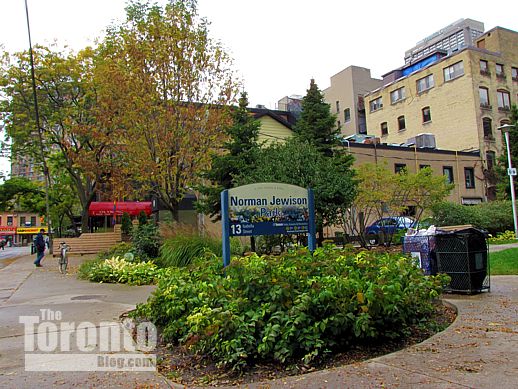 A 29-storey condo tower proposed for Gloucester Street would cast shadows on Norman Jewison Park as early as 3 pm each afternoon, and would block sunlight from Mr. Jewison’s offices in the 5-storey light-brown brick building at right … 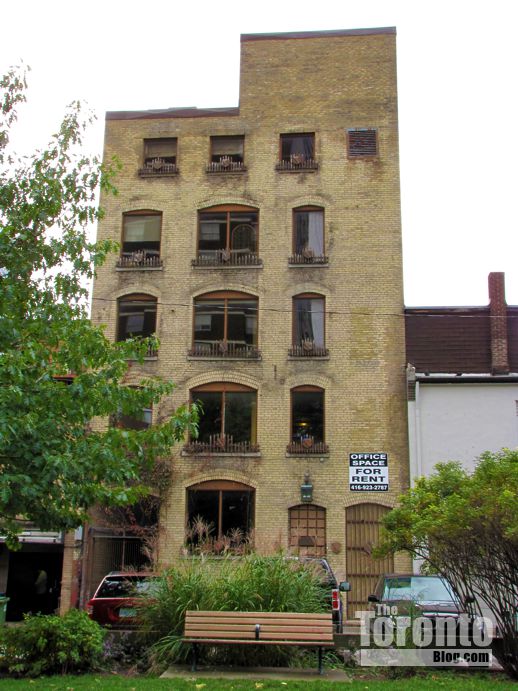 No celebrity endorsement: I have attended a number of community consultation meetings the City has held in the last year to get feedback on proposed condo developments, but this past Tuesday night was the first at which one of Canada’s leading cultural icons stood up to express an opinion. And what world-renowned movie producer/director Norman Jewison had to say was anything but a celebrity endorsement for the condo tower project proposed for 2-8 Gloucester Street.

Mr. Jewison, 85, has offices in a 133-year-old building he owns immediately to the north of the potential condo development site. He told the meeting he was “amazed” that the condo proposal “has gotten so far,” because he had not even been advised that a tower might rise next door, just 3 meters from his windows.

Calling the condo plan “a bizarre idea,” Mr. Jewison expressed dismay that his building “will be completely in shade. Every single window in our building will now be looking into somebody’s bedroom. We’ll have no light. No sun. No view,” he said. “Everything is just squeezed in,” he added, referring to the compact site for the proposed L-shaped, 200,000-square-foot tower which, he said, would bring “a tremendous influx of people into this neighbourhood.”

The acclaimed director and producer of more than two dozen major Hollywood movies which have collectively received 46 Oscar nominations and won 12 Academy Awards, Mr. Jewison was among 25 people who commented on the condo proposal during the two-hour meeting.

As I have previously reported in posts on October 11 2011 and June 22 2011, a developer has applied to the City for zoning changes to permit construction of a 29-storey tower with 211 condominium units next to two heritage buildings at the corner of Yonge and Gloucester Streets. In an August 15 2011 background report, city planners identified 12 main issues with the development plan, and recommended that a community consultation meeting be held to obtain public feedback on the proposal. On September 12 2011, Toronto and East York Community Council directed staff to arrange the consultation session, and the meeting took place this past Tuesday evening at the 519 Church Street Community Centre.

Although many downtown residents and people involved in the condo development industry believe that the ultimate fate of the 2-8 Gloucester project could set the tone for further highrise projects along Yonge Street, turnout was lower than expected. I counted just over 50 people in the room midway through the meeting, but at least 15 of those were city officials, including Ward 27 Councillor Kristyn Wong-Tam, and the developer’s team of professional consultants and advisors.

Chaired by city planner Diane Silver, the meeting featured presentations by the developer’s planning consultant, Craig Hunter, and its architect, David Pontarini of Toronto’s Hariri Pontarini Architects. They led the audience through a slideshow of illustrations, renderings and photos that suggested how the proposed condo tower might look, and how it would visually and physically impact the surrounding neighbourhood.

Mr. Hunter said the developer has been working with its architects and other consultants for more than a year and half to develop its condo proposal. He said the parties realized the project had to be “sensitive” to the linear park and low-rise neighbourhood to its east, and also had to address transportation, heritage and density concerns. He called the proposal filed with the city “a very compatible fit with the existing mix of buildings in the area.”

Mr. Pontarini noted that his firm has “extensive involvement on North Yonge,” having designed the 45-storey FIVE Condos project currently under construction one block southwest of 2-8 Gloucester, as well as the 70-storey One Bloor condo tower presently being built three blocks north. Hariri Pontarini also was one of the consultants involved in the City of Toronto’s Tall Buildings Downtown Project. “We’re very interested in what’s happening along Yonge Street” and in Yonge Street historical preservation, Mr. Pontarini said, adding that the 2-8 Gloucester project “shows how development could occur along Yonge Street.”

His slide illustrations showed that the project calls for the 1878 Masonic Hall building at 2 Gloucester (a City-designated heritage building that now contains street-level retail, along with upper-level offices and condo units) to be preserved and restored, while the building at 8 Gloucester Street (listed, but not yet designated by the City as a heritage building) probably would be pushed forward closer to Gloucester at the southeast corner of the site. No decision has yet been made as to whether that building will be moved in its entirety, or dismantled and reassembled in the new location. Currently occupied by a restaurant and a nightclub, 8 Gloucester would become a “retail component” of the condo development, Mr. Pontarini said.

The condo entrance, forecourt and lobby would be situated off Gloucester Street, but the developer and architects are still considering “how to position the entrance,” Mr. Pontarini said. All service access to the condo would be from Gloucester Lane, including access to an elevator that would move cars into and out of the two-level, 34-space underground parking garage. Mr. Pontarini did acknowledge that city planners are “not happy with the transitions” that have been proposed between the tower and the two heritage buildings, and said the developer’s team will have to take another look at their design plans. “We want to do something remarkable because it [2 Gloucester] is a remarkable building,” he said.

Audience reaction to the proposal was mixed. I found it curious that several people who spoke in favour of the development used the exact same words, all saying they wanted to  “commend” the developer, and all saying they found the glass tower design “intriguing” and “interesting.” One supporter said he thought the development would be “a plus for the neighbourhood,” while another said she thinks it “will upgrade the neighbourhood and make it more beautiful,” since the project will “improve amenities” in the area. But people who voiced criticism of the development, including several Gloucester Street residents, complained that they haven’t seen any amenity improvements in the area since three major condo towers were built close by on Charles Street.

At least six people objected to the tower’s height, including several who identified themselves as members of the recently-established Church Wellesley Neighbourhood Association (CWNA). One man complained that a 29-storey tower will be “a looming force over the Yonge Street heritage strip,” while another agreed that the tower “doesn’t work with existing buildings” nearby, and “overwhelms” the two heritage buildings incorporated into the development. A third concurred that the project “breaks the context of the low-rise neighbourhood.” 2 Gloucester is “the Crown jewel of Yonge Street between Bloor and College,” he said, but the condo tower would completely “wreck” that context. And a woman who identified herself as a member of the Bay Cloverhill Community Association (BCCA) argued that the condo would be nearly three times too tall as it should be for an area characterized by so many heritage buildings. “The last best piece of heritage left on Yonge Street” is along the strip from Grenville Street to Charles Street, she said, offering the view that “Yonge Street should become a heritage street from top to bottom.” When she asked: “What could you do with a 10-storey building on the lot instead?”, Mr. Hunter replied that it was “not likely” that the developer would work toward building a shorter condo.

Pointing out that most units in the condo tower will be studios or 1-bedrooms, one Gloucester Street resident said she wanted to know “Where do families fit in?” Although the development was being “sensitive to Yonge, what about the side streets?” she asked. “What are you bringing to our neighbourhood?” She noted that, not only would the tower block Mr. Jewison’s office building views and sunlight, but studies showed it would cast shadows on the adjacent Norman Jewison Park — one of the few public green spaces in the area — as early as 3 p.m. each day. Mr. Hunter responded that it was possible some of the condo units could be redesigned in a “convertible” configuration of 2-bedroom plus den or 3-bedroom styles that would be suitable to families. As for what the developer would be doing for the neighbourhood, he said it was proposing “custom crafted” amenities. It had plans to “transform” Gloucester Lane into “a more pedestrian feel,” he said. And while he admitted that the tower would cast afternoon shadows on Norman Jewison Park he said that, with any development, “there are gives and takes.” And, he pointed out, the City’s own mixed-use designation for the site “is meant to accommodate growth.”

Several speakers weren’t critical of the condo plan per se, but of the problems that would be posed by a new building that would bring several hundred more residents into the neighbourhood without a corresponding expansion of city services and resources, especially for transportation. Even though the tower would rise along a subway line, two speakers pointed out that the Yonge subway is already stressed and overcrowded, so adding more residents to the Yonge Street strip will only make a bad problem worse. “That has to be addressed,” said one area resident who complained about subway congestion. Another said it was “incongruous” that the city would consider further intensification in the neighbourhood without balancing that off with improvements to public transit.

And in what I thought was a novel argument, one man said he thought the city must allow the tower to be built because people who will move to downtown Toronto in future years have a “right” to live in buildings such as the one proposed for Gloucester Street.

Getting back to Mr. Jewison, who was upset to learn about what he repeatedly called a “bizarre project” only after the public consultation meeting was scheduled. Mr. Hunter said he had believed someone had contacted Mr. Jewison’s family to discuss the condo development proposal, and had not received any objection to the plan. Nevertheless, he apologized to Mr. Jewison for the oversight in not contacting him directly. 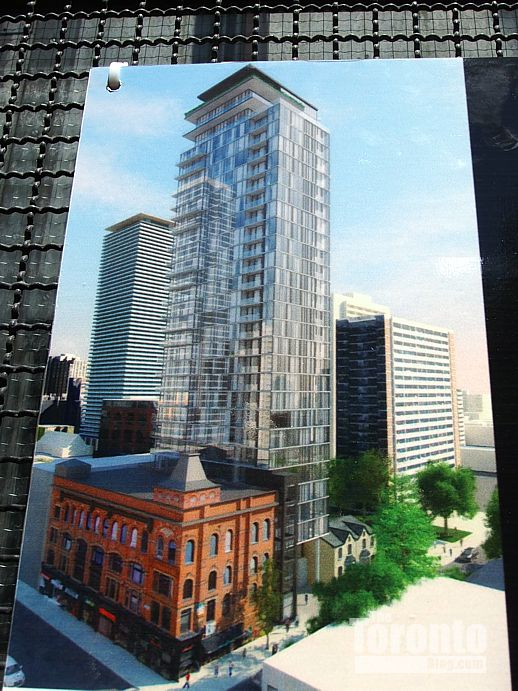 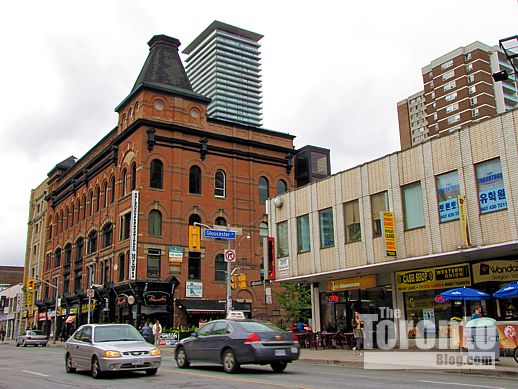 October 14 2011:  The 1878 Masonic Hall heritage building at the northeast corner of Yonge and Gloucester Streets, viewed from the southwest. The proposed condo tower would rise to the right of the five-storey brown brick building. 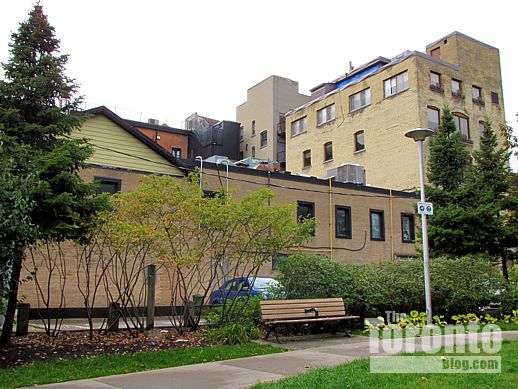 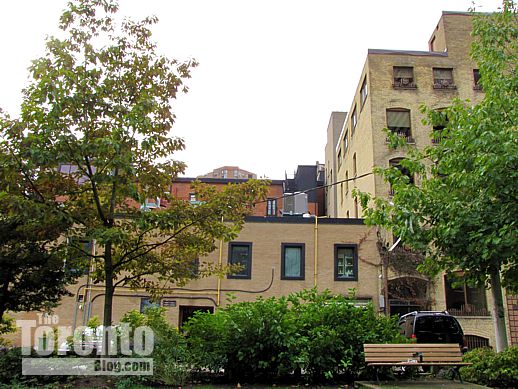 October 14 2011:  The proposed 29-storey condo tower would be built where the two-storey building is situated. Canadian movie producer/director Norman Jewison owns the five-story building on the right, at 18 Gloucester Lane 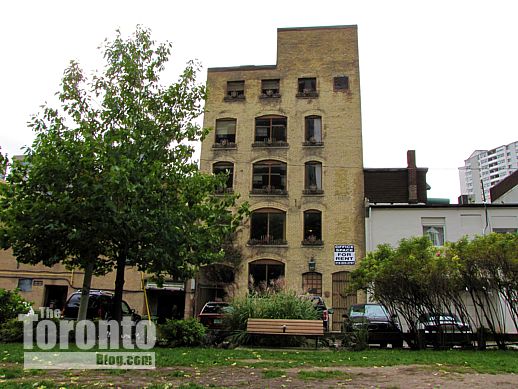 October 14 2011: Mr. Jewison’s building at 18 Gloucester Lane, viewed from the linear park that the City of Toronto named in the film director’s honour 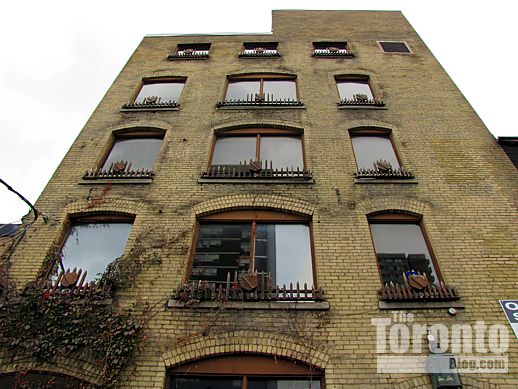 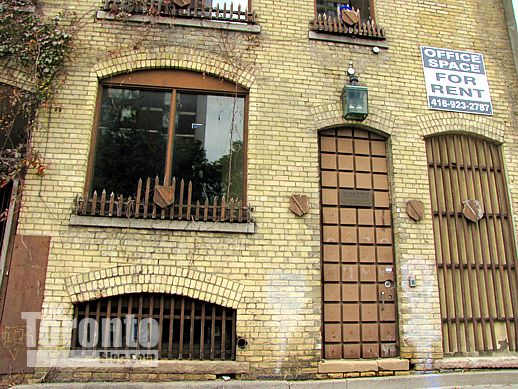 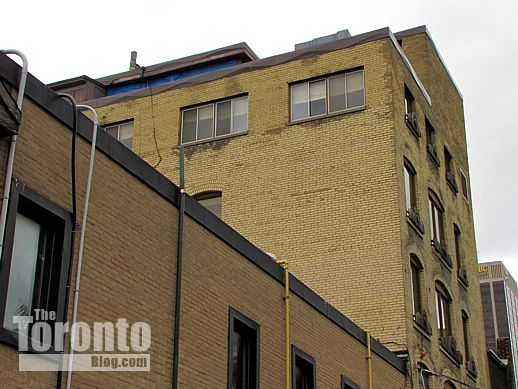 October 14 2011: Looking up at the south side of 18 Gloucester Lane. The proposed condo tower would rise only 3 meters away from Mr. Jewison’s building.