The 2-storey Family Service Toronto building is situated at the southeast corner of Church and McGill Streets, a downtown neighbourhood known as the McGill-Granby Village. The residential enclave sits just north of the Ryerson University campus and is bounded by Yonge Street, Carlton Street, Jarvis Street and Gerrard Street East. According to the McGill-Granby Village Residents’ Association website, City of Toronto bylaw 283-83 established a “special identity” for the neighbourhood, recognizing McGill-Granby “as an area which merits planning attention to preserve residential house form dwellings in the City’s core.”

The neighbourhood also is governed by Area Specific Policy 151 of the City’s Official Plan, which requires that new buildings in the area be designed “to minimize the extent to which they overlook, overshadow or block views from existing or committed house-form buildings, and to ensure that the location of new vehicular access routes does not interfere with the use of private open space of adjacent homes.” City planners are, of course, obliged to assess the tower application to ensure compliance with those planning provisions.

Second tower proposed for the intersection

The 355 Church Street tower is the second highrise development proposed for one of the corners of the Church & McGill intersection. In a December 17 2012 development application, development firm Menkes sought approval to build a 30-storey condo tower at the northeast corner of the intersection, at 365-375 Church Street, a property currently occupied by a surface parking lot. On January 18 2011, city planners issued a preliminary report on the proposal, identifying 15 separate planning issues that would have to be resolved. One of those was “neighbourhood traffic and parking impacts,” a huge concern for McGill-Granby residents who fear their area cannot handle the additional traffic load posed by a 30-storey condo.

During the course of 2011, the application gradually worked its way through the city’s planning review process; however, city planners had not issued a final report on the project by the end of the year. Late last fall, at one public meeting I attended, a planner said city officials believed that an appropriate height range for a tower at 365 Church would be 15 to 25 storeys. On January 18 of this year, Menkes ultimately exercised its right to appeal to the Ontario Municipal Board on the ground that the city had not rendered a decision within the time frame established by provincial law. The OMB will hear the developer’s appeal on July 11 2012.The outcome could have a bearing on the height of the tower proposed for 355 Church across the street.

Although the Menkes appeal is still pending before the OMB, the developer has been accepting registrations from prospective purchasers for its project, 365 Church, for the past several months. 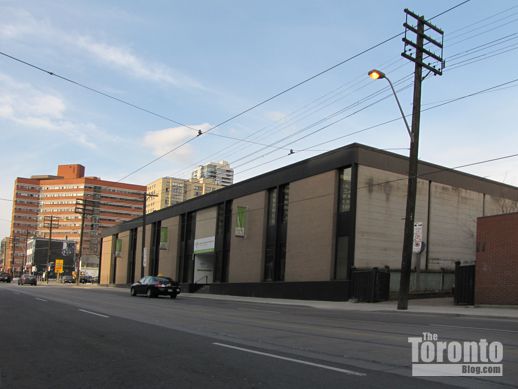 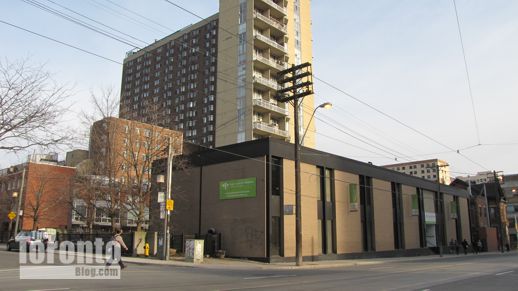 March 7 2012: Looking toward the Family Service Toronto building at 355 Church from the northwest corner of Church & McGill Streets 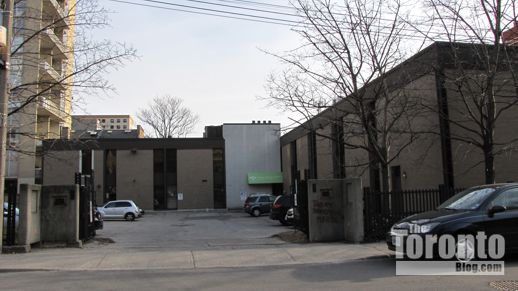 March 7 2012: A private outdoor parking area occupies the east side of the property behind the L-shaped building at 355 Church 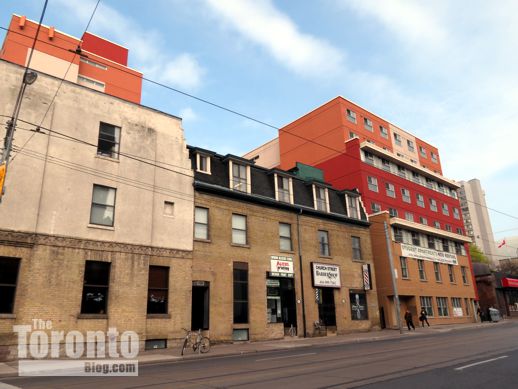 May 2 2012: Buildings across the road from the proposed tower site, on the west side of Church Street between Gerrard and McGill Streets 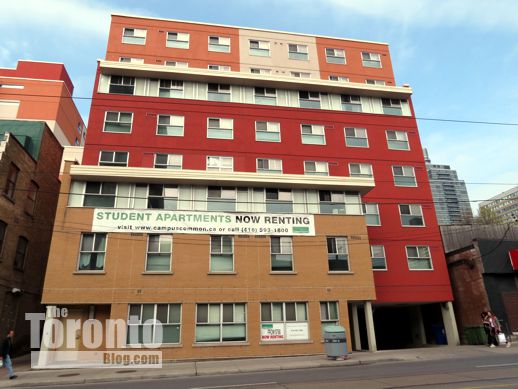 May 2 2012: The buildings on the west side of the street include this L-shaped, 8-storey apartment building which fronts on both Church and Gerrard Streets 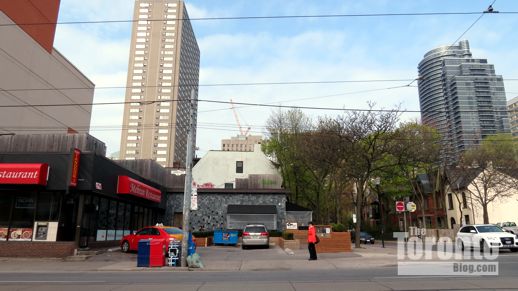 May 2 2012: The southwest corner of Church & McGill Streets, directly across the street from 355 Church. There are two restaurants on the corner, including the very popular Guu Toronto Izakaya. 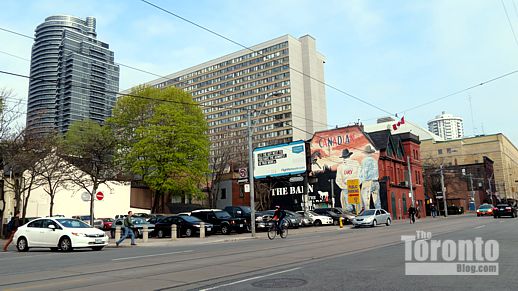 May 2 2012: The northwest corner of Church & McGill Streets is occupied by a surface parking lot. Immediately to the north of the parking area is The Barn, a gay nightclub that has been in business more than 30 years. 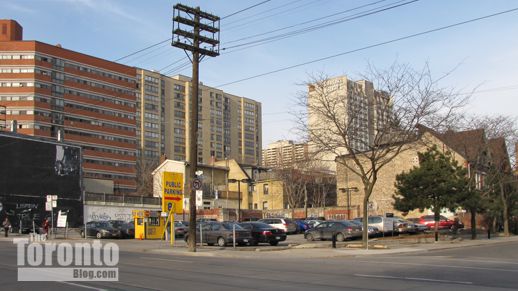 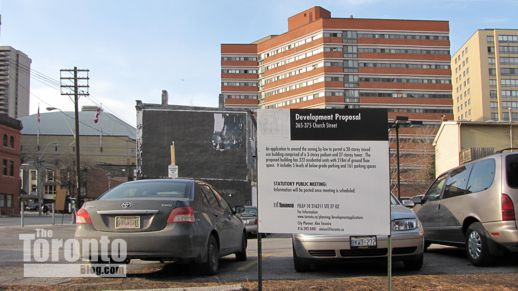 March 7 2012: The development proposal sign at 365 Church Street. The big white roof of Maple Leaf Gardens is visible one block to the northwest, on Carlton Street. 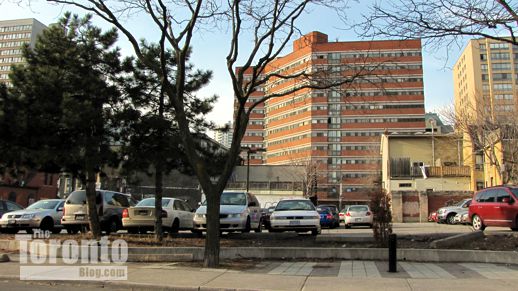 March 7 2012: North view from McGill Street of the development site 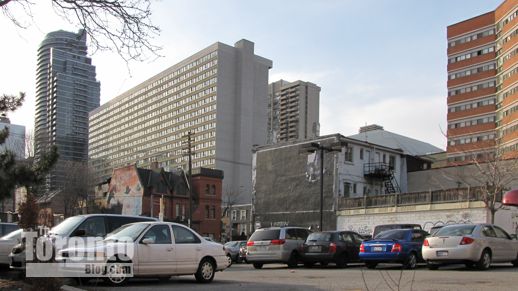 March 7 2012: Northwest view from McGill Street across the Menkes site 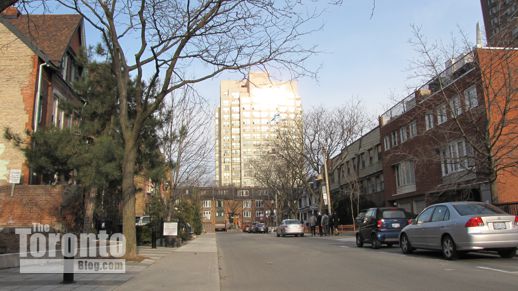 March 7 2012: The south side of McGill Street, immediately to the east of 355 Church, features 3-storey townhomes and semidetached houses. 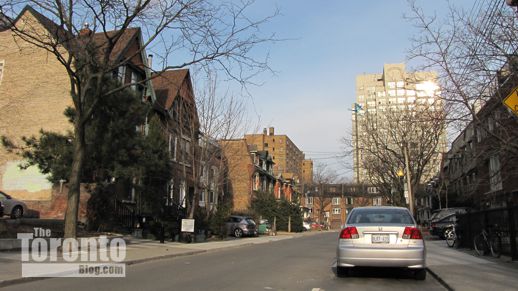 March 7 2012: The north side of McGill is lined with 3-storey semidetached houses.The east end of the block terminates at Mutual Street; the highrise in the background is the 18-storey Metropolitan Essex condo building at 296-298 Jarvis Street. 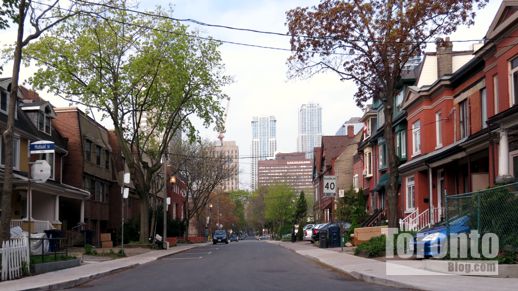 May 2 2012: Looking west along McGill Street from Mutual Street