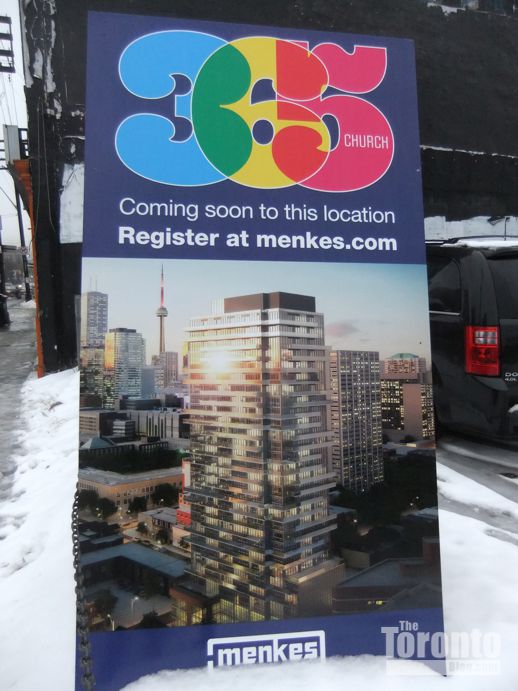 January 28 2013: This sandwich board sign with a rendering of  the forthcoming 365 Church condo by Toronto developer Menkes … 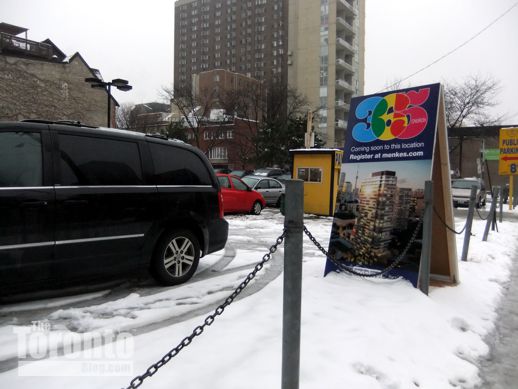 … has appeared on the development site, currently a surface parking lot at the northeast corner of Church & McGill Streets … 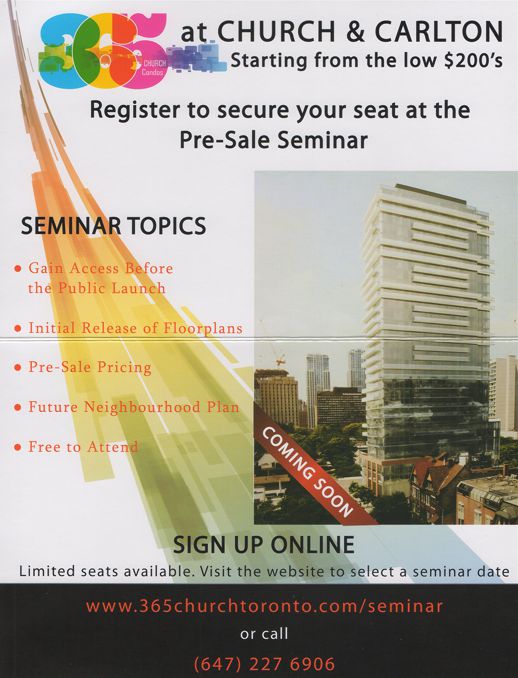 … while this “pre-sale” promotional flyer has been distributed to hundreds of households in the area by a Thornhill, Ont.-based real estate brokerage firm.

Sales launch approaching: Promotional activity has begun to rev up for the 29-storey 365 Church condo tower that will rise in the heart of the McGill Granby Village low-rise neighbourhood near Church & Carlton Streets.

A “coming soon to this location” sandwich board sign, bearing an architectural rendering of the rectangular glass building that Menkes plans to build at 365-375 Church Street, was set up just in the past couple of days in the parking lot that presently occupies most of the development site. And last week, a Thornhill, Ontario real estate brokerage firm distributed flyers promoting a website and “pre-sale seminar” for the 365 Church project to hundreds of households in the surrounding area.

But an official full-scale sales launch for the project could be weeks or even several months away, since a legal proceeding concerning the development is due to be heard by the Ontario Municipal Board (OMB) in mid-March. 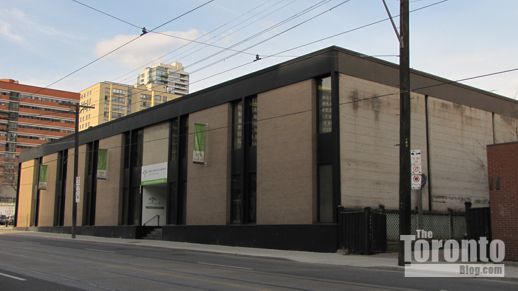 March 7 2012: A 33-storey tower with condos and 3 floors of offices has been proposed for the site of this building at 355 Church Street … 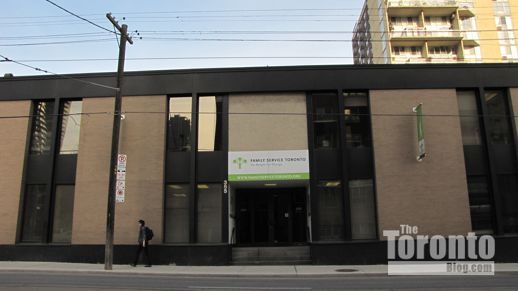 … presently the home of Family Service Toronto, an organization that provides counselling, support and other social services for families and individuals

More change for Church Street: A centre that provides counselling services for individuals and families facing difficult life challenges faces a big challenge of its own — finding new premises — now that a development application has been filed with the city to build a condo on the site of its 3-floor facility.

According to an April 26 2012 rezoning application filed with the City, a developer wants to build a 33-storey tower on the 355 Church Street site currently occupied by Family Service Toronto. The building would have a 4-storey podium with street-level retail and 3 floors of office space, topped by a 29-storey residential tower with 335 units. The building would have parking for 185 vehicles on four underground levels, along with 301 bicycle parking spaces. 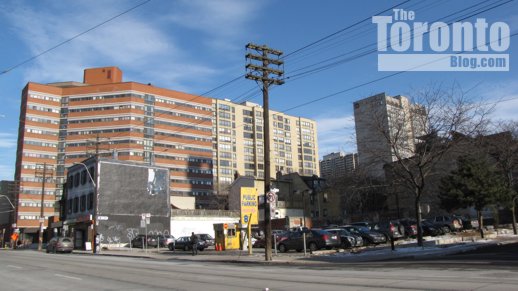 Church Street growing taller? Sometimes it really ticks me off to see developers propose new office or condo towers for sites where attractive old or historic buildings are standing — especially since there are so many parking lots and empty parcels of land scattered throughout the downtown core where development would seem more appropriate or even necessary. Why not leave the nice old buildings and their charming streetscapes alone, I often wonder,  and build on the underused empty lots instead?

So when a developer came along proposing to do just that — construct a condo tower where a parking lot now sits on Church Street — I should have been thrilled. Instead, I felt almost as upset as I get when I hear that a wonderful heritage building is going to be destroyed to make way for a new condo. The reason? The new highrise might block my beloved view of the CN Tower!

Now I admit it probably sounds silly to be fretting about losing views of the CN Tower. But those views are worth a lot of money: real estate agents are constantly pestering us to sell our condo because they have clients eager to buy places with the great skyline views we enjoy every day (and we really do love our view). We don’t plan to move in the foreseeable future but, when we do decide to sell,  will potential buyers still be as keen for our place if the view is blocked? I doubt it, but that’s a problem we probably won’t have to worry about for several more years.

The potential view-blocker would be a 30-storey condo tower the Menkes corporation has proposed for the parking lot that currently occupies the northeast corner of Church and McGill Streets (municipal address: 365 – 375 Church). The site is just a stone’s throw south of Toronto’s Gay Village, where two other condo tower plans have recently encountered some stiff community opposition (I’ll be posting photos and info about those projects soon).

Menkes proposes a three-storey podium with street-level retail space, and a 27-storey condo tower on top. The building would have 322 residential units plus five underground levels accommodating 161 parking spaces. The tower would be taller than zoning restrictions allow, so Menkes would have to obtain an exemption from City Hall before it could build.

City councillor Kristyn Wong-Tam told Xtra!, the newspaper for Toronto’s gay and lesbian community, that city planning staff believe the Church Street parking lot is an “underutilized” site “that can bear development.” However, she personally isn’t certain “if it can bear 30 storeys,” and promises that neighbourhood residents will get to provide input. A story in the January 13 edition of Xtra! offers further information about the project, as well as Ms. Wong-Tam’s plans for community consultation. Below are some of my photos of the proposed development site. 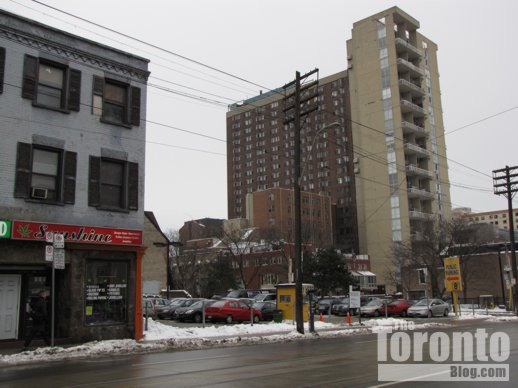 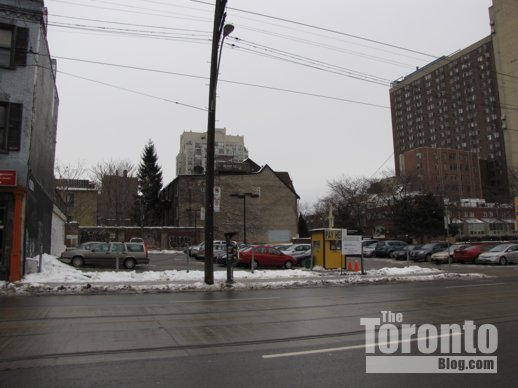 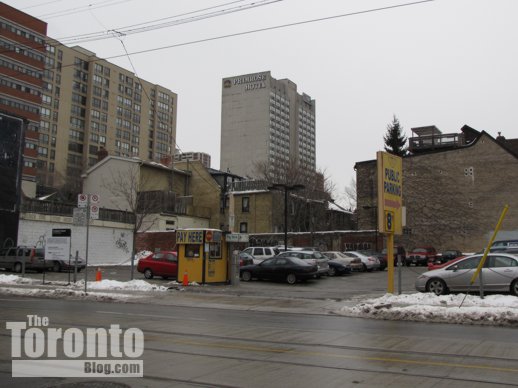 Northeast view of the site from McGill Street on January 18 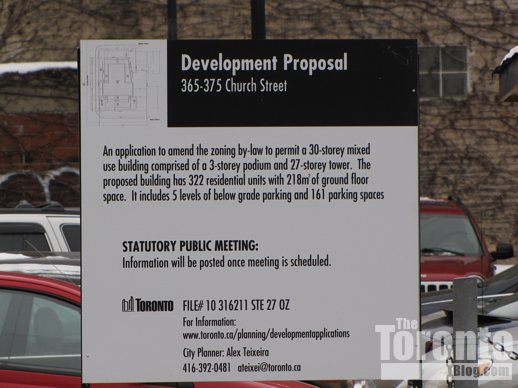 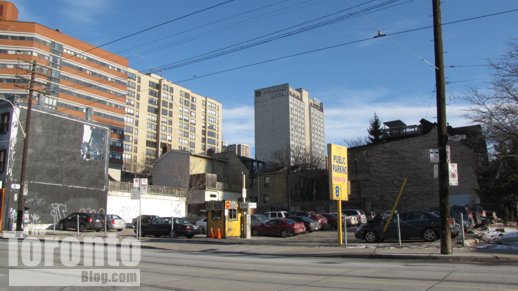