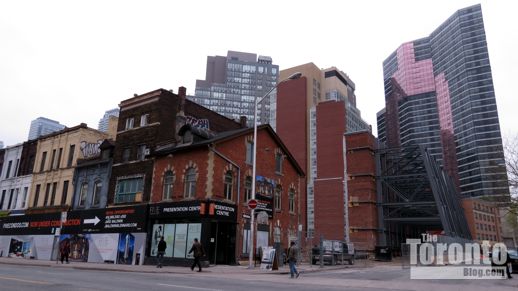 May 1 2012: A view of the FIVE Condos development site at the southwest corner of Yonge and St Joseph Streets, one block north of Wellesley Street 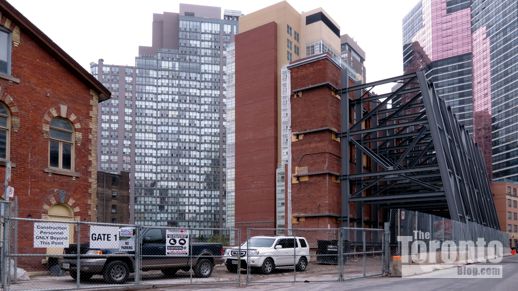 May 1 2012: Excavation is well underway for a condo tower that will rise at least 45 storeys behind the facade of the former Rawlinson Cartage warehouse building, seen here being held in place by a giant frame on St Joseph Street

Much like the Nicholas Residences site a short walk up the street, the 5 St Joseph Street location for FIVE Condos poses some interesting challenges for excavation crews. They, too, have been digging directly behind a row of heritage buildings that front along Yonge Street. What makes their task even more complicated, however, is that they must work beneath the 4-storey brick facade of the historic Rawlinson Cartage building that formerly occupied the site — a huge structure currently held in place by a giant steel frame on St Joseph Street. The facade eventually will be incorporated into the condo tower podium, while the west wall of another brick building that once stood next door to it on St Nicholas Street also will be reconstructed as part of the FIVE Condos development.