As I noted in a February 6 2012 post about the proposal, the property in question bears the municipal addresses of 304-314 Jarvis Street as well as 225 Mutual Street, and sits directly across the street from Allan Gardens, one of the city’s oldest downtown parks and botanical gardens.

Heritage mansion would be incorporated into the project

Most of the development property is vacant land that has been operated illegally (according to city planners and Ward 27 Councillor Kristyn Wong-Tam) as a surface parking lot since last autumn. But the site also includes the Sheard Mansion at 314 Jarvis Street, a designated heritage building. Duration proposes to demolish the mansion’s rear wing and basement foundation and temporarily relocate the building, on site, while the underground parking levels for the condo complex are constructed. The mansion would then be moved to a new location just slightly to the south of its present place, and would be restored. Duration also proposes to widen McClear Place, a narrow east-west lane that runs between Jarvis and Mutual Streets, on the north side of the development site, to provide vehicular and service access to the condo complex.

The tower proposal didn’t sit well with staff in the city’s parks and planning departments, who were concerned about the impact that shadows cast by the condo tower could have on trees across the street in Allan Gardens, as well as on the hundreds of species of tropical plants and flowers  — some of which are rare — growing in the Palm House conservatory and four attached greenhouses.

The City held a community consultation session on February 27 to get public feedback on Duration’s plan.  The building’s designer, Quadrangle Architects principal Les Klein, addressed the shadow impact concerns early in his presentation. He noted that the placement and wedge shape of the thin 41-storey condo tower were intended to minimize shadows on Allan Gardens, and would have less impact than an 18-storey tower that the Ontario Municipal Board had approved for the site in 1996.

But in a March 28 2012 refusal report, city planners cited shadow impact among several reasons for recommending that Toronto and East York Community Council (TEYCC) reject Duration’s application for zoning changes that would permit construction of its project. The building’s impact on heritage properties, and its proposed use of the McClear Place laneway also were cited as reasons for refusing the application.

“Heritage staff have evaluated the proposal and do not support the proposed movement of the heritage building as it would constitute an unnecessary negative impact on a valuable heritage resource,” the planners wrote. Moreover, “The proposal represents over-development of the site and would have a negative impact on another significant heritage resource, Allan Gardens, which is a significant cultural heritage landscape that is designated under Part IV of the Ontario Heritage Act. The proposed building does not transition to the neighbourhood designation, creating unsupportable shadow and over look issues. Furthermore, the proposed tower massing does not mitigate the shadow impact it will have on the adjacent park Allan Gardens, leading to a significant reduction in the amount of sunlight.

“The servicing of the site is also problematic. Servicing is proposed to be off of McClear Place, a private lane. It does not appear that the applicant has access rights over this lane. Technical Services has also indicated that the laneway would have to be widened to a greater extent than what is currently being proposed which would require the heritage building at 314 Jarvis Street to be moved even further from its original location, exacerbating the heritage impacts,” the planners added.

The refusal recommendation will be considered at the TEYCC’s May 15 2012 meeting, as will a planning department request that the city refuse to allow the partial demolition and relocation of the Sheard heritage mansion. 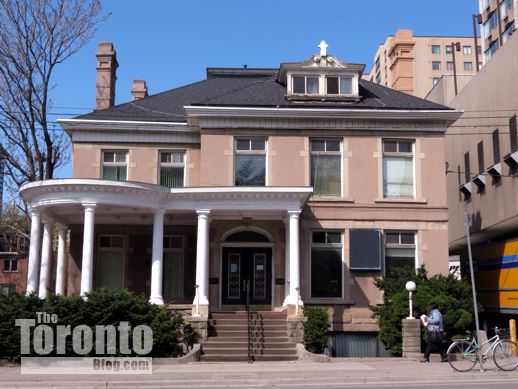 May 9 2012: City planners and heritage staff are recommending that the city not allow the developer to partially demolish and relocate the Sheard mansion, a designated heritage property, because it would “constitute an unnecessary negative impact on a valuable heritage resource.” 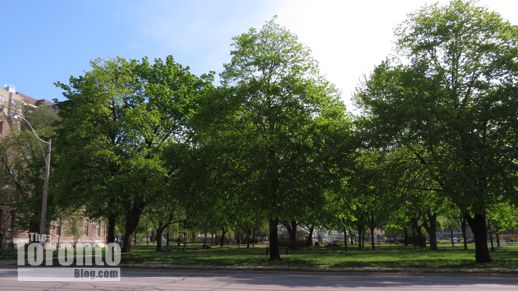 May 9 2012: City planners say the condo tower would have a negative impact on the “significant cultural heritage landscape” of Allan Gardens across the street

February 28 2012: Looking north on Mutual Street toward the proposed condo development site. Five townhouses would be built at the end of the row of 4-level townhomes shown at right; the 41-storey tower would rise behind them. City planners say the proposal creates “unsupportable shadow and overlook issues” and does not “transition to the neighbourhood designation” for the McGill-Granby area immediately to the west of the site. 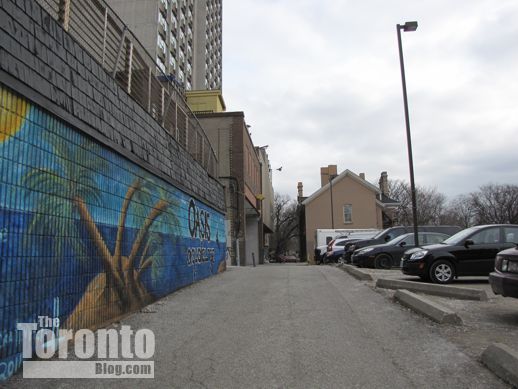 February 28 2012: Looking east from Mutual Street along the McClear Place laneway. The developer proposes to widen this lane by about 1.5 meters to allow vehicular and service access to the condo site, which will occupy what is now a surface parking lot. But planners say the lane is private property. 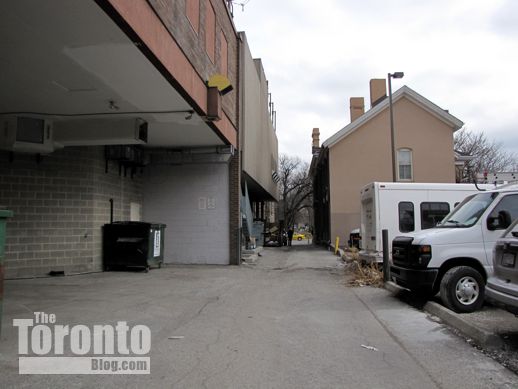 February 28 2012: The lane is narrowest between the Sheard mansion and the Best Western Primrose Hotel. The developer proposes to demolish the rear wing of the mansion and move the building 1.5 meters south so the lane can be widened for resident and service vehicle access to the condo complex. 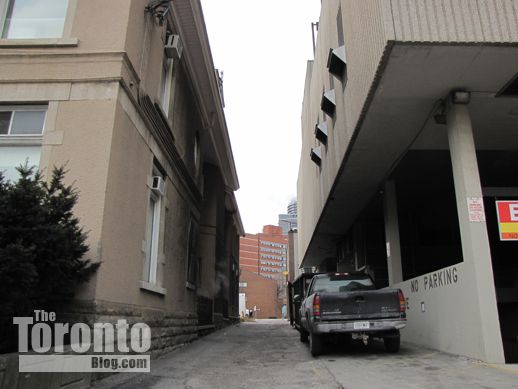 February 28 2012: Looking down the McClear Place lane from Jarvis Street. The entrance ramp to the Best Western Primrose underground parking is situated at right. Service vehicles frequently occupy most of the laneway adjacent to the hotel. Even if the lane were to be widened by 1.5 meters, access to the condo could still be problematic. 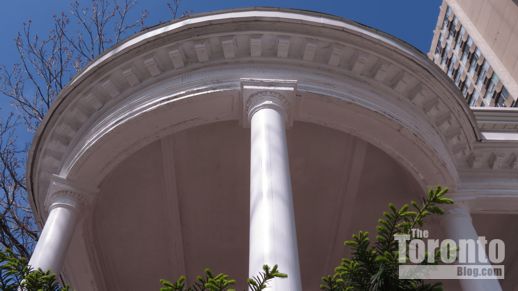 May 9 2012: The distinctive rounded roof of the Sheard Mansion veranda 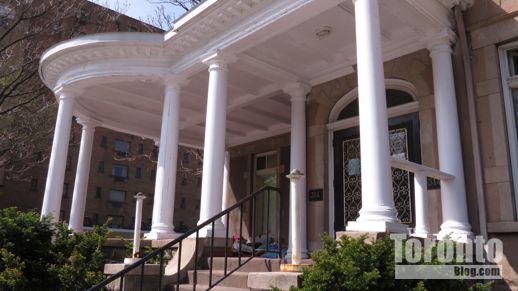 May 9 2012: For weeks, the veranda has been occupied by homeless people … 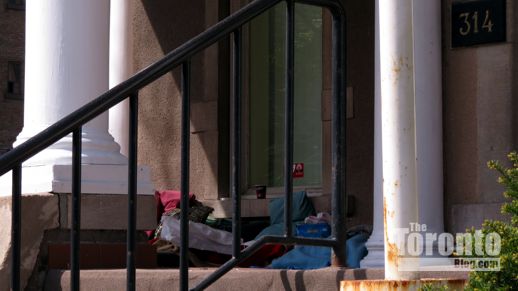