As the sound of jackhammering echoed loudly in the neighbourhood, demolition crews detached individual segments of the beige concrete facade on the building’s east side. A crane then lowered each loosened piece to a staging area on Laplante Street, which was closed to vehicular traffic for half a block north of Gerrard.

Several bystanders commented that they have become so accustomed to watching windows and cladding gradually being installed on the dozens of condo and office towers currently under construction in downtown Toronto that it seemed strange seeing the process happen in reverse.

As I reported in a January 17 2011 post, the University Health Network (UHN) plans to build a state-of-the-art lecture hall on the site, once demolition of The Residence has been completed.

UHN President Bob Bell mentioned the lecture hall project in an April 28 2012 announcement to staff, in which he said the organization was working with Toronto’s Diamond Schmitt Architects “to develop an exciting and innovative design which addresses a current gap in our ability to provide facilities for education at UHN.” So far, however, no further information about the building’s size and design has been publicly disclosed, nor have any renderings or building illustrations been made public. And, as of this week, the City of Toronto website did not include any development applications for the 90 Gerrard site.

Below are more photos of demolition progress on the building. 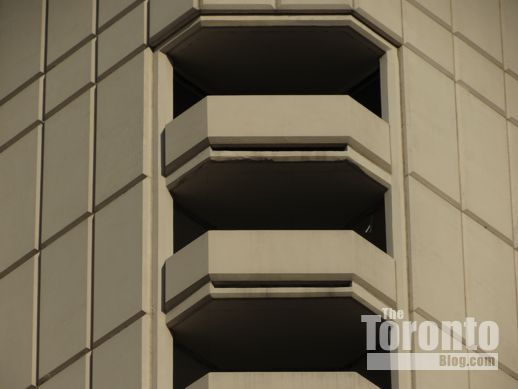 April 27 201: Glass was removed from the building a year after interior demolition began 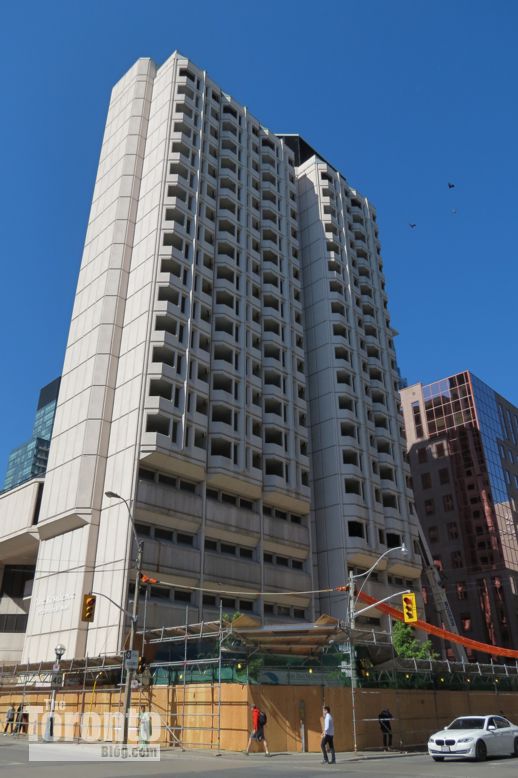 June 13 2012: Hoarding surrounds the building’s southwest side at the intersection of Gerrard and Elizabeth Streets 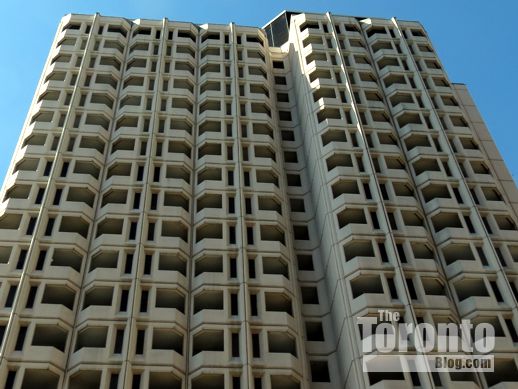 June 13 2012: Looking up the building’s south side, from Gerrard Street 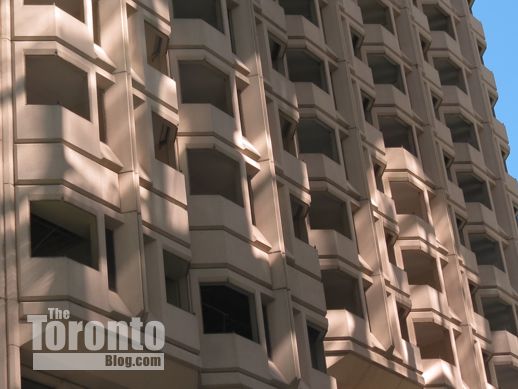 June 13 2012: Sunshine reflects off adjacent glass towers and onto the east wall of the windowless Residence building 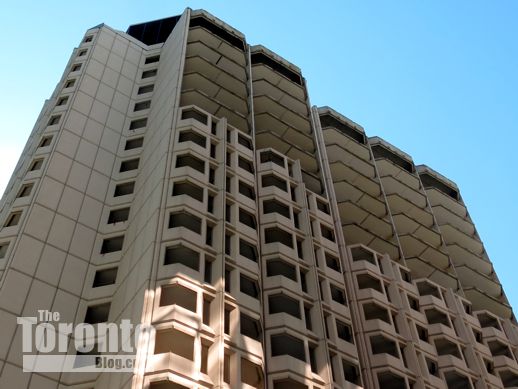 June 13 2012: The exterior walls from as many as seven floors have been removed from the building’s east side, as seen in this view from the corner of Gerrard and Laplante Streets 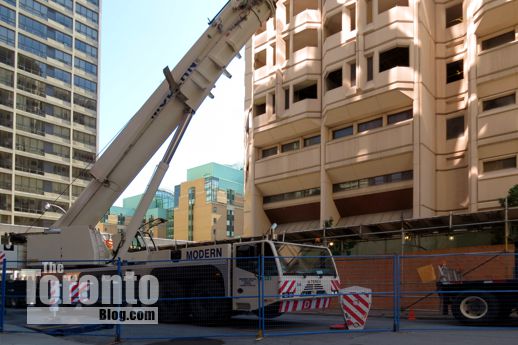 June 13 2012: This Terex crane on Laplante Street assists with the demolition 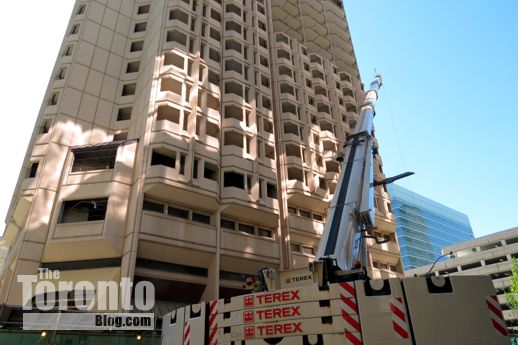 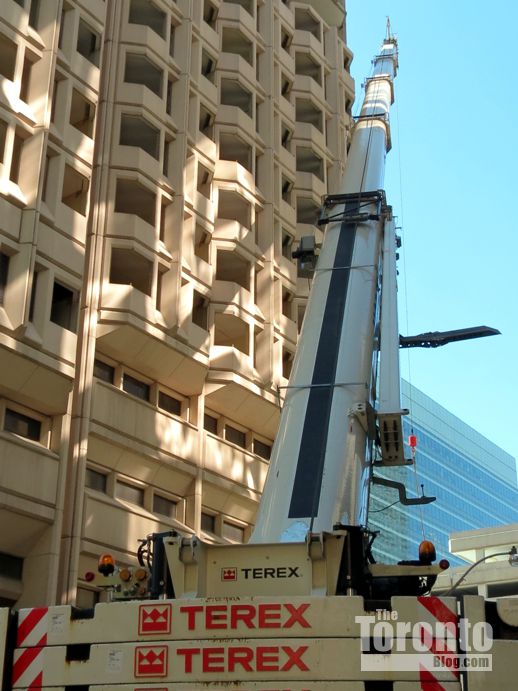 June 13 2012: The rear of the Terex crane assisting with the project 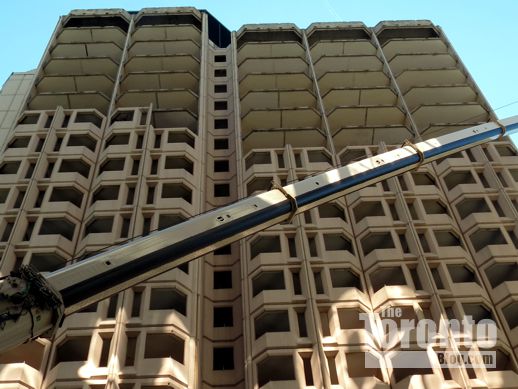 June 13 2012: The crane’s boom extends longer than the width of the building 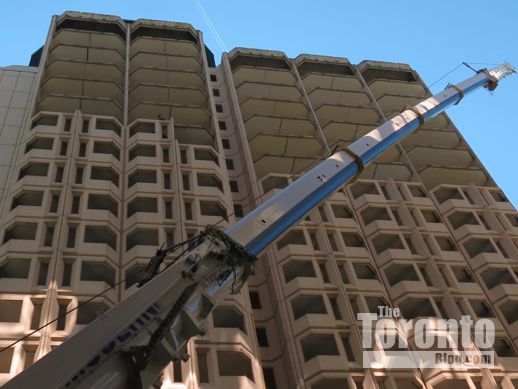 June 13 2012: The boom rises to collect another concrete section of building exterior 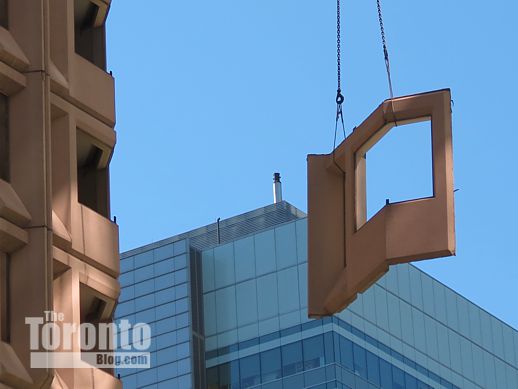 June 13 2012: Another piece of the 43-year-old building is lowered to the ground