Buildings with medical clinic and gay bar sold in 2012

70 Carlton Street is a 2-storey building on the northeast corner of Church and Carlton Streets. It once served as executive office space for Maple Leaf Gardens across the street — back in the days when the Gardens was still hosting NHL hockey games. After the Toronto Maple Leafs moved to the Air Canada Centre, 70 Carlton was leased to Maple Leaf Medical Clinic (a group of doctors not affiliated with the hockey team), a medical laboratory, and a pharmacy.

Last summer, doctors at Maple Leaf Medical began advising patients that their practices would be relocating because 70 Carlton had been sold. Although speculation was rampant that a developer had purchased the property for redevelopment into condos, the doctors were not told who the buyer was, or what its plans actually were.  The doctors and the lab moved two blocks west to 14 College Street last October, but the pharmacy has remained open in its street-level premises.

Around the same time that 70 Carlton was sold, the neighbourhood began buzzing with world that the 2-storey building next door at 72 Carlton — home to a gay bar called Zipperz & Cell Block — had also been purchased by the same buyer. This news convinced many area residents that property was being assembled for a major condominium tower development. Many had long believed the corner sites were ripe for redevelopment, particularly since there is a large surface parking lot directly behind them — plus a Loblaws grocery store and Ryerson University’s Mattamy Athletic Centre in the revitalized Maple Leaf Gardens on the opposite side of Church Street.

No word if parking lot is part of development site

The condo plan isn’t surprising. At some public meetings I attended in 2011 and 2012, city planners said they fully expected that a development application would be filed for property at the northeast corner of Church & Carlton. However, one planner told me that the parking lot behind the two Carlton Street buildings would not likely be part of the redevelopment site. The development description on the City website doesn’t mention the parking area, but it curiously doesn’t mention 72 Carlton, either. However, the 70 Carlton site, on its own, is not large enough for a tower.

I will update this post with further information once I’m able to obtain more details about the proposal.

Below are several more photos showing 70 & 72 Carlton and the parking lot to their north. 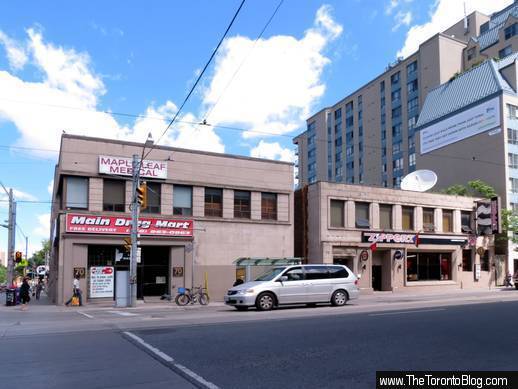 A view of 70 Carlton, left, and 72 Carlton. The Main Drug Mart is still open, but the Maple Leaf Medical clinic has relocated to 14 College Street. Zipperz bar is still open for the time being, too. The 12-storey building next door to Zipperz contains rental apartments and Tobias House accommodations for people with disabilities. 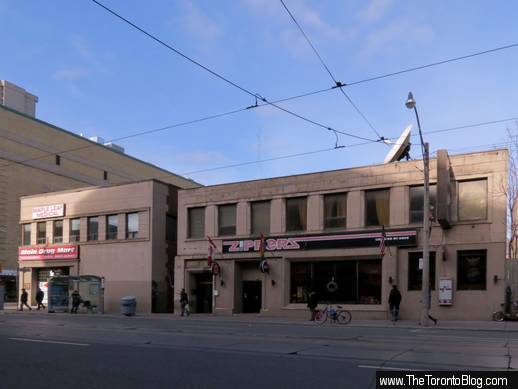 70 and 72 Carlton, seen from the south side of Carlton Street 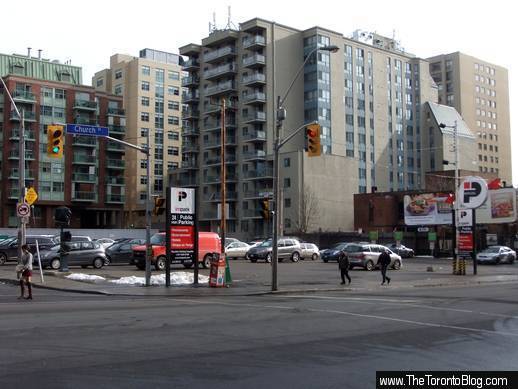 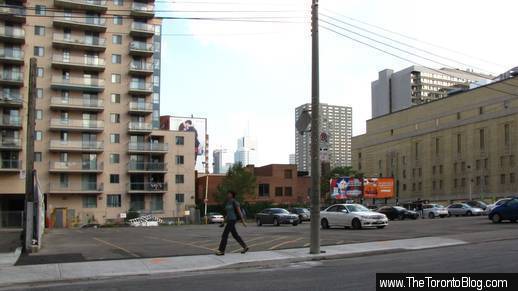 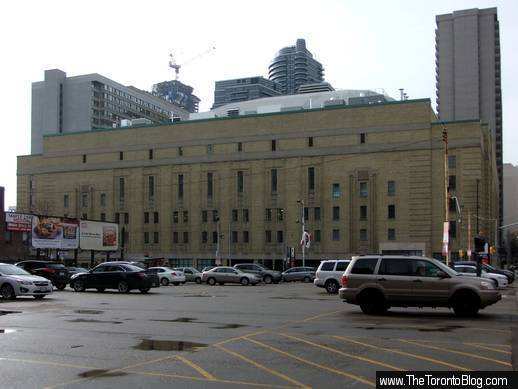 Looking west across the parking lot toward the revitalized Maple Leaf Gardens, which is now home to a Loblaws grocery store, a liquor store, a Joe Fresh clothing shop, and the Mattamy Athletic Centre of Ryerson University