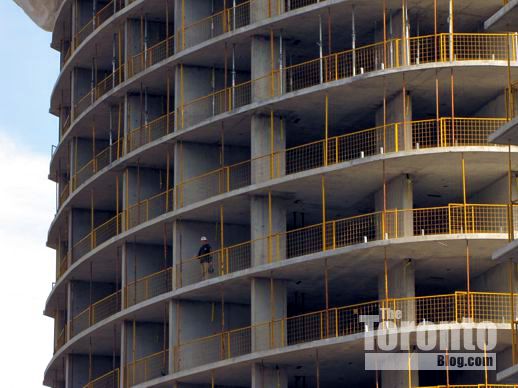 March 7 2012: A construction worker gazes at downtown Toronto from the curved west building of the 2-tower ÏCE Condos complex currently under construction at the southwest corner of York Street and Bremner Boulevard. Construction of the oval-shaped tower has reached more than 11 levels so far, on its way to 57 storeys. A project of Lanterra Developments, ÏCE Condos was designed by Peter Clewes of Toronto’s architectsAlliance. 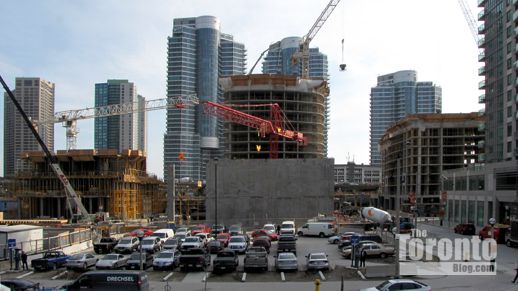 March 7 2012: Looking south from Bremner Boulevard towards the ÏCE Condos construction site. At left, construction of the 67-storey east tower has reached 3 levels while its sibling, center, has already climbed 11 levels on its way to 57. A 31-storey office building will eventually be constructed on the parking lots site in the foreground. The building under construction to the right is the Infinity3 condo tower, which has risen 9 floors on its way to 34. Infinity3 is a project of The Conservatory Group, and was designed by E.I. Richmond Architects Ltd.