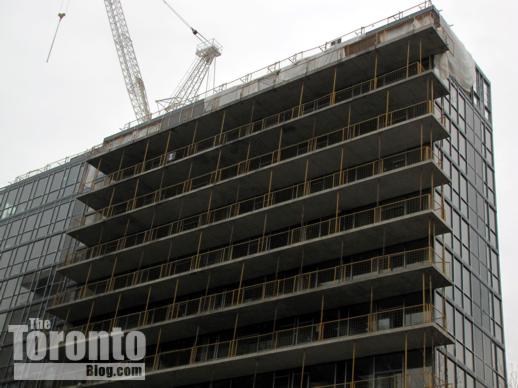 Balconies on the north side of Victory Condos, viewed from a park below 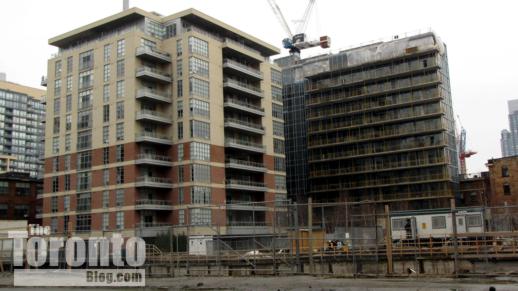 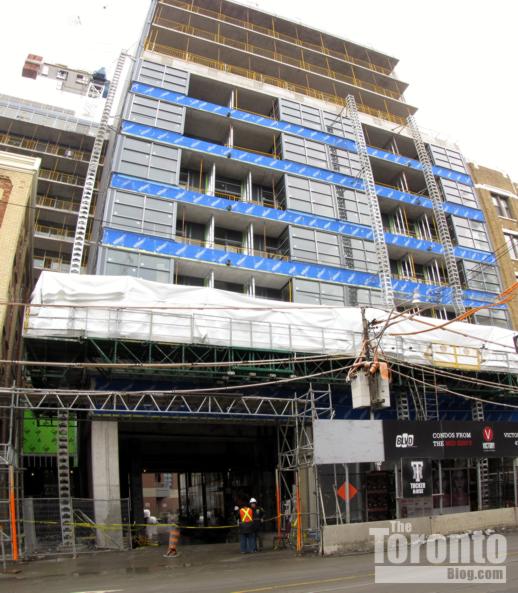 Both sides now: My January 15 post about Victory Condos included photos of the building site and construction progress as viewed from King Street West. A few weeks ago, I took a walk down Adelaide Street West so I could get some pics of the building’s north side. Here they are. 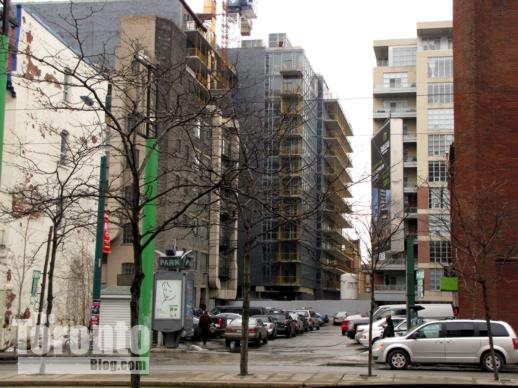 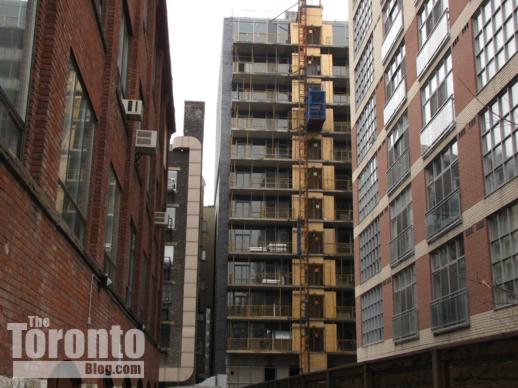 Victory Condos north side viewed from a lane on Adelaide St. W. 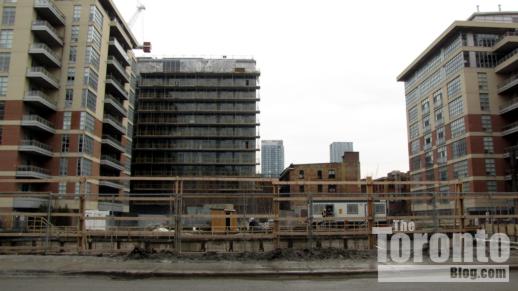 Adelaide Street West view of Victory Condos and its two Quad Lofts neighbours. The long excavation site in the foreground, along on the south side of Adelaide, is where the Lofts 399 Condos are currently under construction. 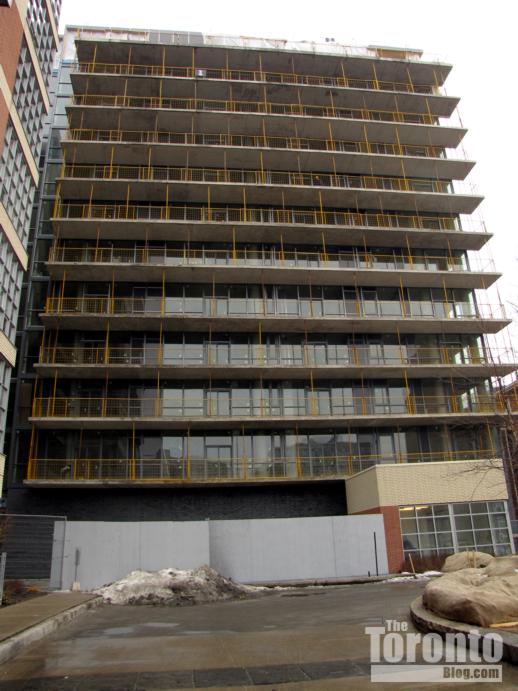 Victory Condos viewed from a driveway beside Quad Lofts 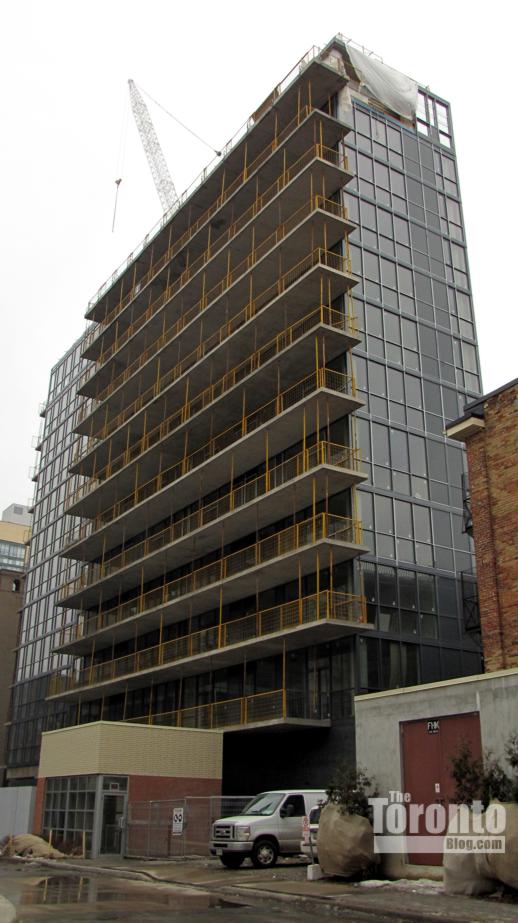 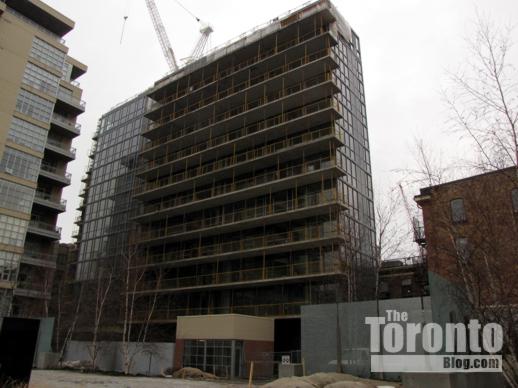 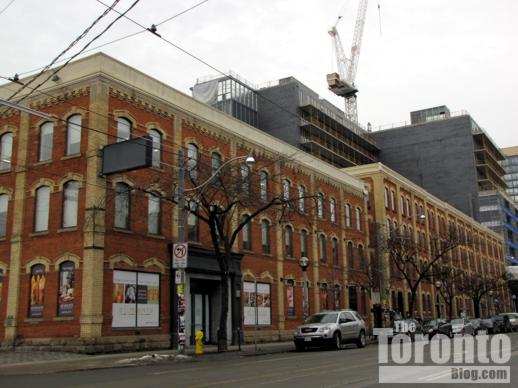 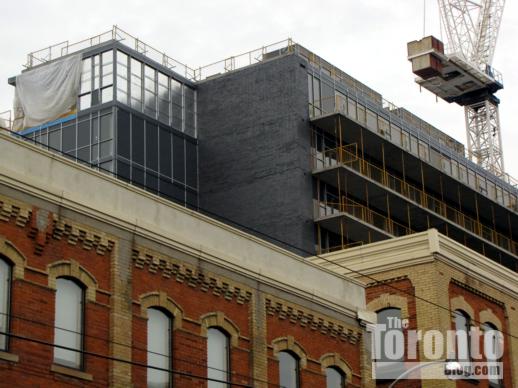 The upper levels of the 12-storey condo building approach completion 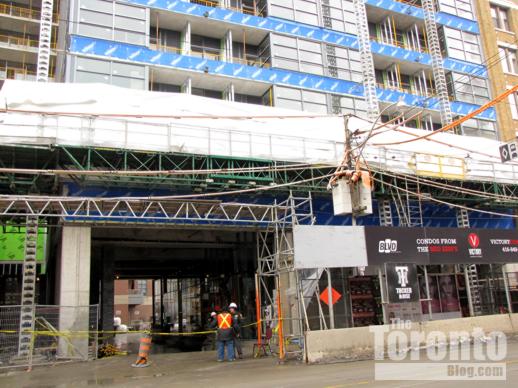 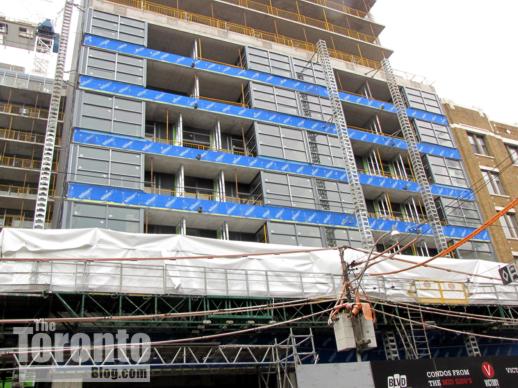 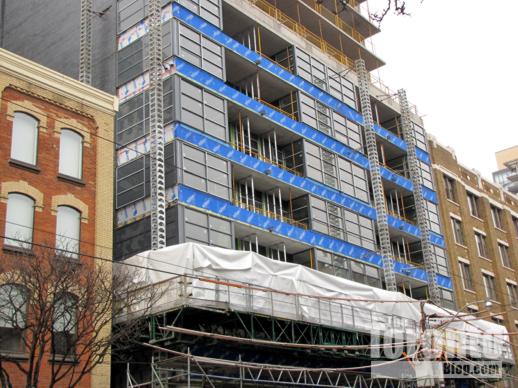 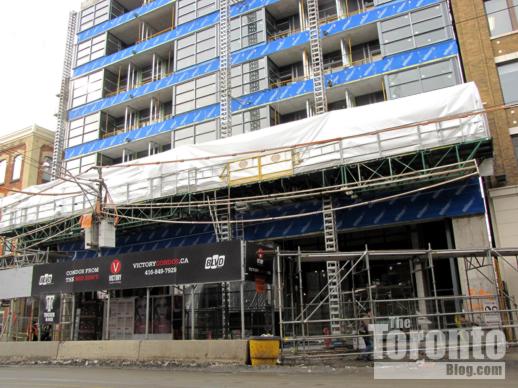 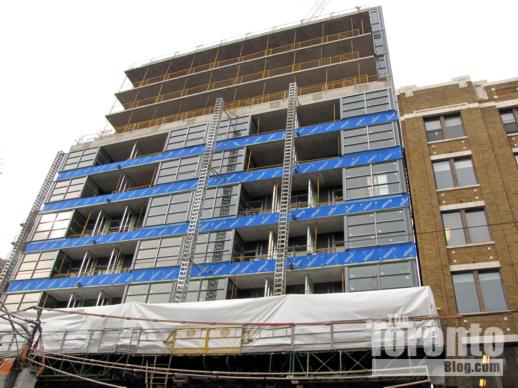 Looking up the front of the building from King Street West 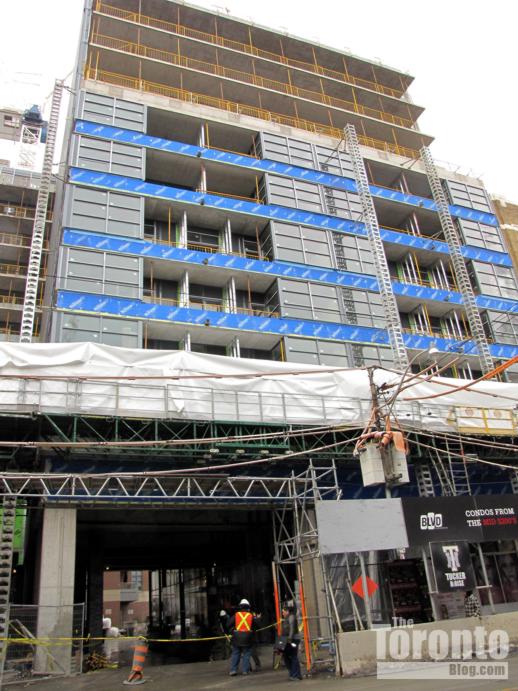 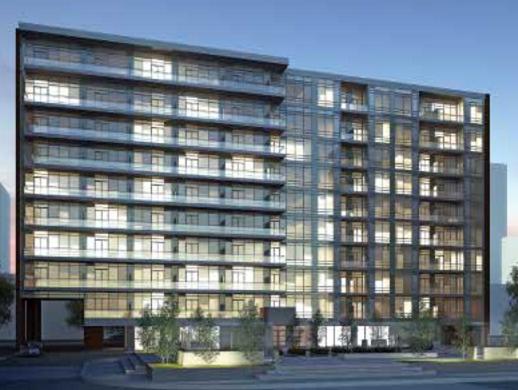 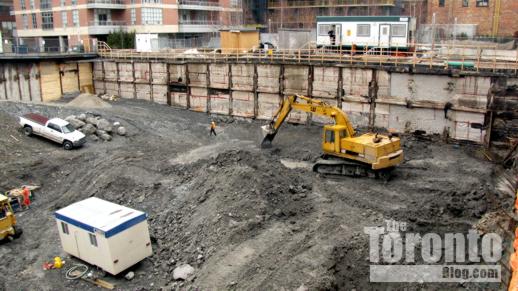 Digging away: Looks like a condo building is slowly but surely getting constructed, at last, at 399 Adelaide Street West.

A condo project called Mode Lofts originally had been planned and sold for the site west of Spadina Avenue, but never materialized. Mode ultimately got cancelled, but Cresford Developments resurrected plans for a loft project on the same location, and now there’s finally a big hole in the ground.

Now named Lofts 399, the 10-storey building will have 173 units. It will become a new neighbour to the two Quad Lofts buildings that will flank its east and west sides, as well as the Victory condos building which is nearing completion to its immediate south.

Once Lofts 399 has finished construction, it will enclose a landscaped contemporary square between the four condo buildings — the so-called “Hidden Garden” pictured on the Lofts 399 website.

Below are several photos I took Thursday of the ongoing excavation work at the project site. 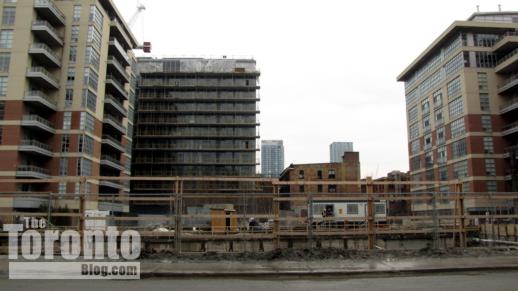 The two Quad Lofts buildings bookend the Lofts 399 excavation while Victory Condos on King St., nearing the end of construction, sits to the southeast. 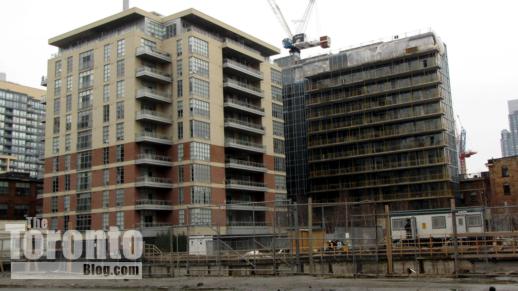 Quad Lofts, left, and Victory condos behind the excavation site 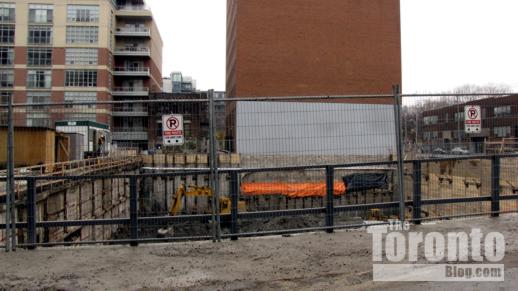 Lofts 399 excavation viewed from the east side of the property 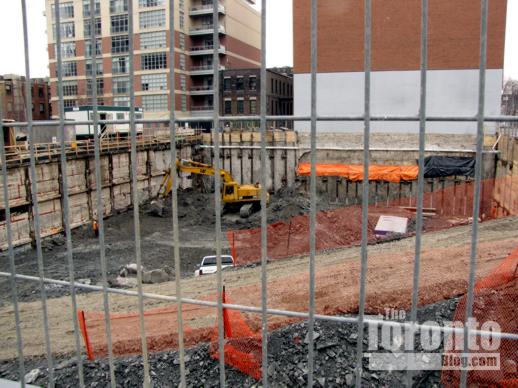 The construction vehicle ramp from Adelaide Street into the pit 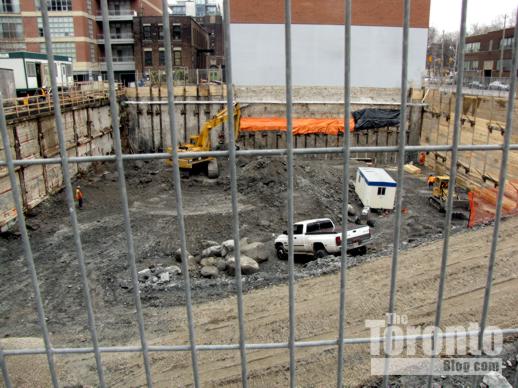 Only three or four construction workers were on site 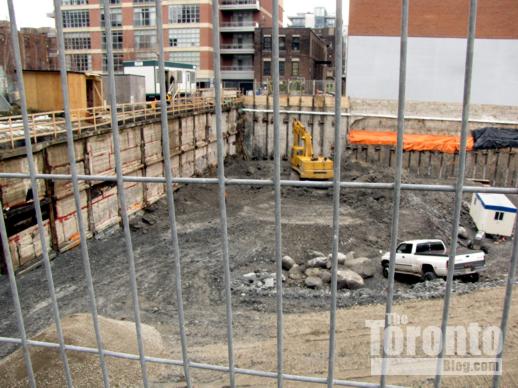 Excavator digging at southwest corner of the pit 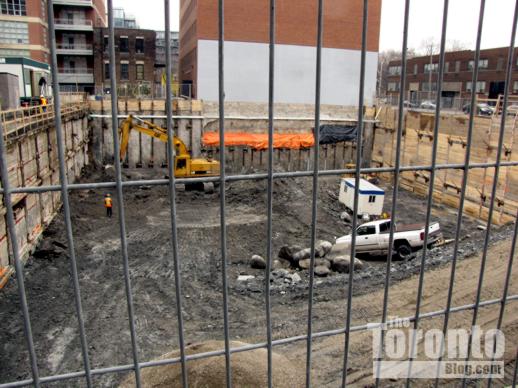 The pit is more than two levels deep so far 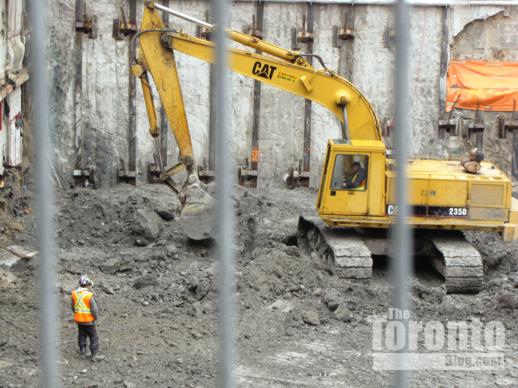 One worker watches the backhoe dig 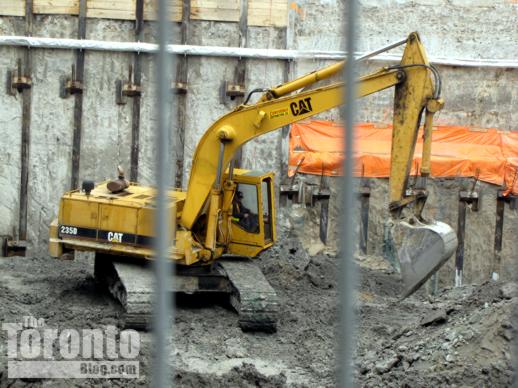