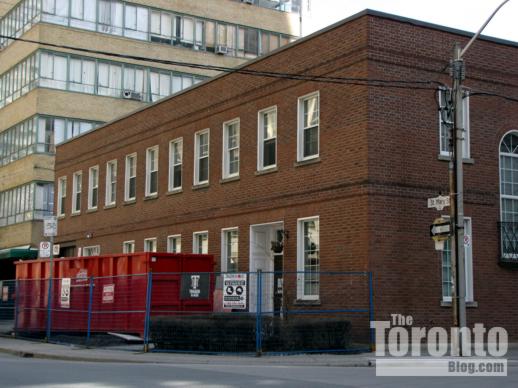 April 1 2011: 15 St Mary Street site for Nicholas Residences viewed from St Nicholas Street. The interior of the building’s first floor has been completely gutted as site demolition gets underway. 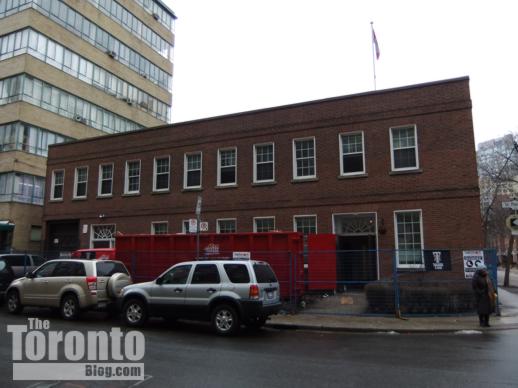 Crews have begun preparing 15 St Mary Street for demolition. The brick building, seen here on Thursday, occupies part of the site on which the 35-storey Nicholas Residences will be built at the corner of St Mary and St Nicholas Streets 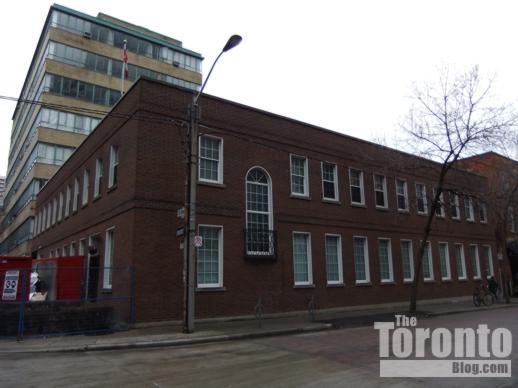 A view Thursday afternoon of the north and west sides of 15 St Mary Street, where work crews have begun demolishing the building interior.

It’s going: Construction has begun on Nicholas Residences, a controversial highrise condo building that will tower above a quiet tree-shaded side street in the bustling Yonge & Bloor area. Work crews have fenced off the north side of 15 St Mary Street and parked a giant red dumpster outside the building as they begin gutting the interior of what was once Regis College, the Jesuit Graduate Faculty of Theology at the University of Toronto.

The two-storey brown brick building sits at the southeast corner of St Mary and St Nicholas Streets, directly behind the Church of Scientology Toronto building on Yonge Street. 15 St Mary is one of three buildings that will be demolished to make way for the condo tower; the other is a three-storey brick building at 65 – 67 St Nicholas Street, while the third structure to be torn down sits behind those two buildings, at the rear of commercial buildings which front onto Yonge Street. The brick facade for 65 – 67 St Nicholas will be reconstructed and incorporated into the podium for the new condo tower.

Although project developers Urban Capital and Alit Developments, along with people who have purchased condos at Nicholas Residences, must be thrilled that construction has finally commenced, numerous neighbourhood residents will be tremendously disappointed to see the work begin. They had staunchly opposed the development, which originally proposed a 44-storey peanut-shaped building for the site, and launched a strident “Save St. Nick” campaign to oppose plans for development on the cobblestone St Nicholas Street, home to a row of Victorian cottages dating from the 1880s.

In an August 6 2008 preliminary report, city planners identified numerous issues and concerns with the development proposal, including its height, density, its relationship to the streetscape and its impact upon “the overall character of St Nicholas Street.” The developers revised their plans, proposing in part to reduce the tower’s height to 29 storeys and to retain the facade of 65 – 67 St Nicholas Street, a mill building dating to the 1880s, by incorporating it into the condo building.  Details and building renderings, some of which I’ve posted below, are outlined in a 15 St Mary Street Development Application report on the City of Toronto website.

In a September 24 2009 report, city planning staff recommended a 29-storey condo be approved on certain conditions, including payment of $685,000 toward capital improvements to nearby Queen’s Park along with streetscape improvements to St Mary and St Nicholas Streets. Toronto and East York Community Council adopted the report at their meeting on October 13 2009; their decision was reported in an October 14 2009 article in the Globe and Mail. The rezoning application subsequently was approved at the October 26 2009 meeting of Toronto City Council. But that didn’t end conflict between the local community and the condo developers.

Although the developers had agreed to lop 15 floors off their initial tower proposal and settle for building a 29-storey condo instead, residents were enraged when they learned that a potential buyer had been offered a unit on the 33rd floor. The developers subsequently asked City Hall to enact a minor variance to the bylaw that had been passed to permit construction of the 29-floor tower — they wanted permission to add another six storeys to Nicholas Residences. When the city’s Committee of Adjustment unanimously refused, the developers appealed to the Ontario Municipal Board (OMB).

The Save St Nick group hired lawyers to oppose the developers at the OMB hearing; however, the developers, the City and the residents’ organization negotiated an agreement to resolve the dispute once and for all. In return for approval to build six more storeys, the developer agreed to pay $750,000 toward a community benefit project, the details of which would be worked out by the parties later.

Below are some of the photos I’ve taken of the Nicholas Residences site, along with renderings by the project designer, Core Architects Inc., of both the original tower proposal and revised 35-storey building that will be constructed. Those illustrations appear in the project application report on the City of Toronto website. 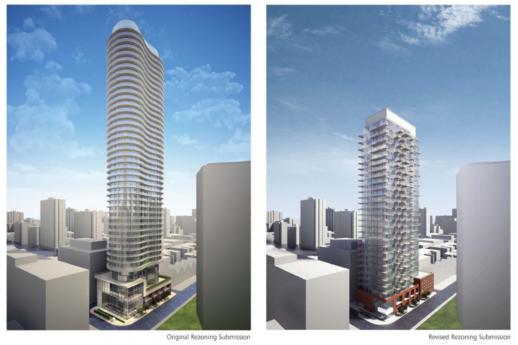 From the City of Toronto website, artistic renderings of the original (left) and the revised Nicholas Residences condo tower. Instead of the curvaceous Figure-8-shaped 44-floor tower initially proposed, a 35-storey condo will be built.

Also from the City website, artistic renderings of the St Nicholas Street-level appearance of the original (left) and the revised Nicholas Residences condo tower. 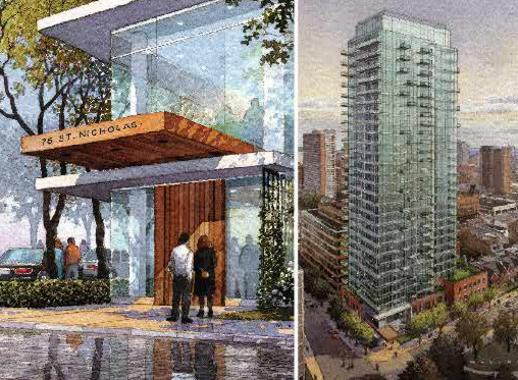 From the Nicholas Residences website, artistic illustrations of the 29-storey glass-walled condo tower and its main entrance at 76 St Nicholas Street. 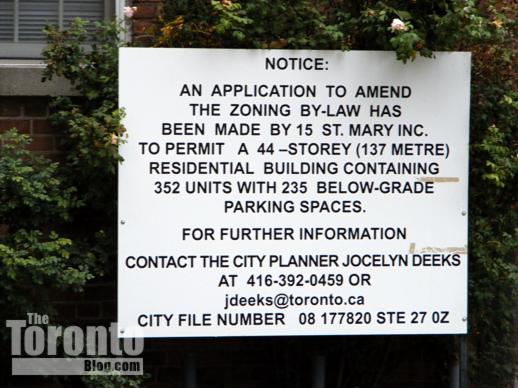 The original development proposal sign posted at the condo site in 2008. 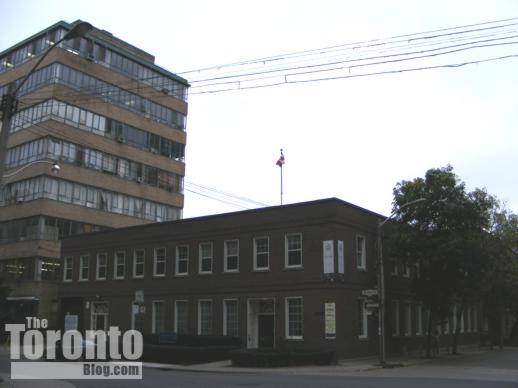 September 28 2008 view of 15 St Mary Street, which at the time still bore signs for its former occupant, Regis College (long since relocated to 100 Wellesley Street West). The Church of Scientology Toronto building stands to the east, at the corner of Yonge & St Mary Streets. 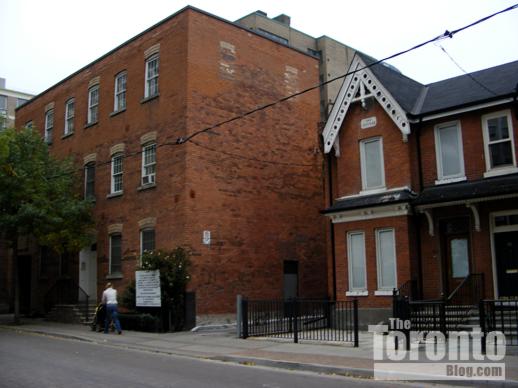 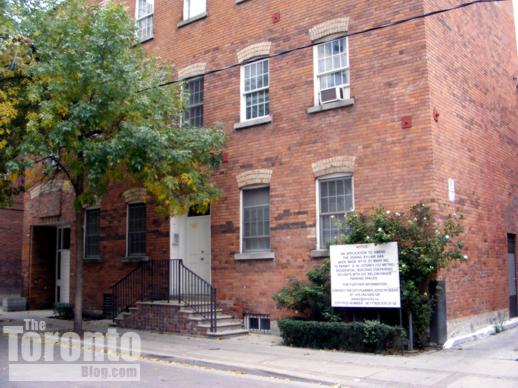 September 28 2008: Once a planing mill, the building at 67 St Nicholas Street dates from the late 1880s. Its facade will be built into the condo tower podium. 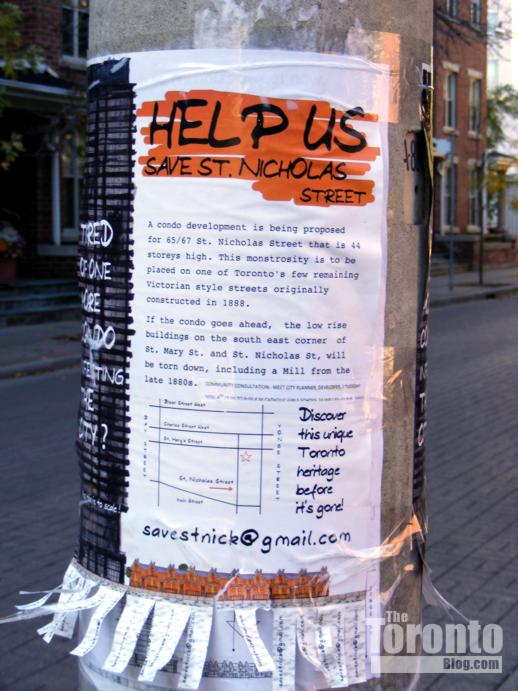 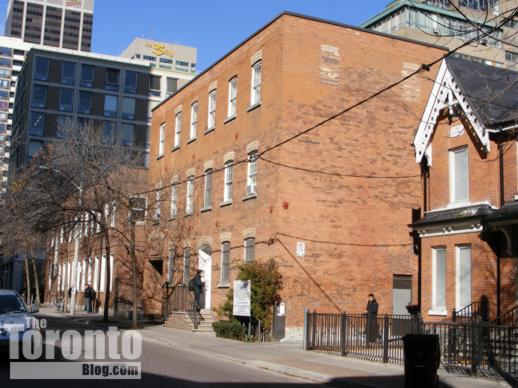 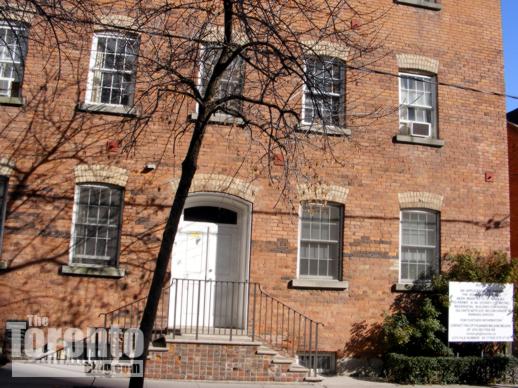 October 30 2008: The former mill building at 65 – 67 St Nicholas was occupied by Regis College until the faculty relocated to Wellesley Street West. 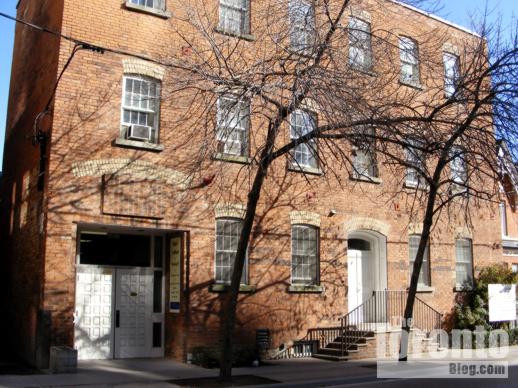 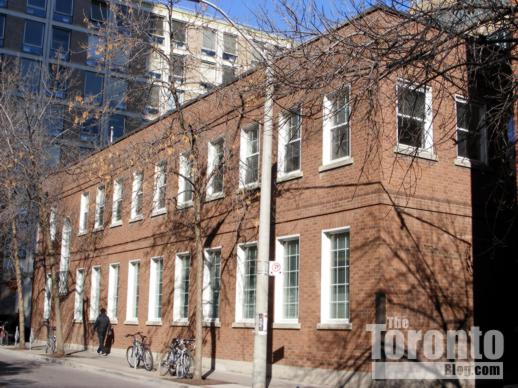 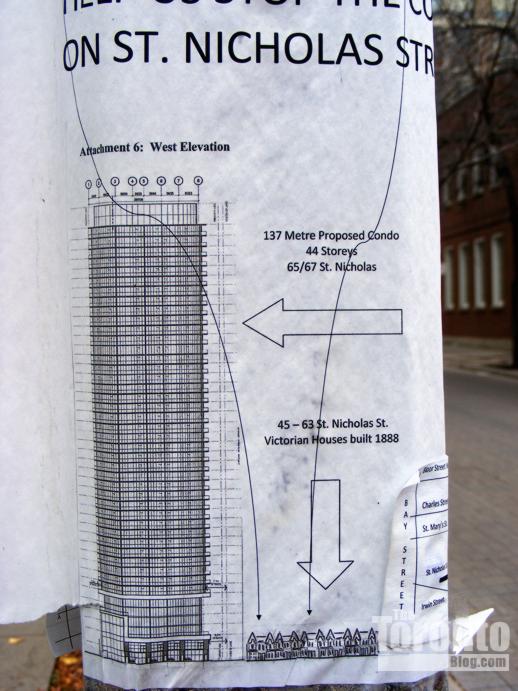 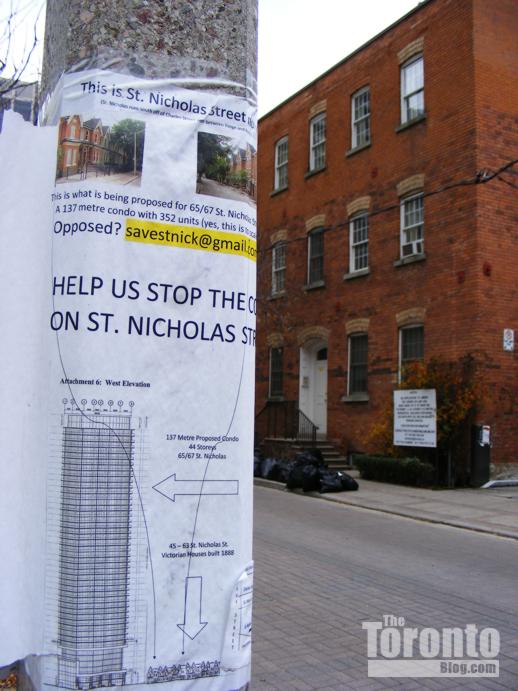 November 14 2008: A Save St Nick campaign sign on a  St Nicholas Street lamp post. The mill building at 65 St Nicholas, along with the condo development proposal sign, can be seen across the street. 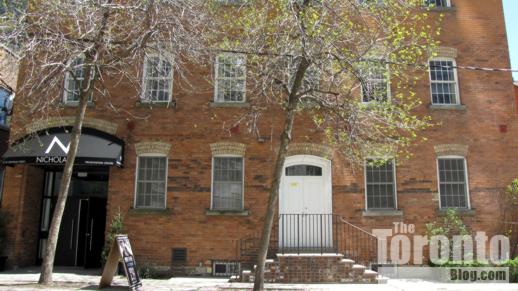 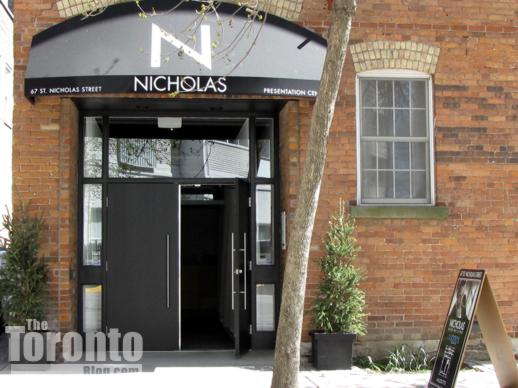 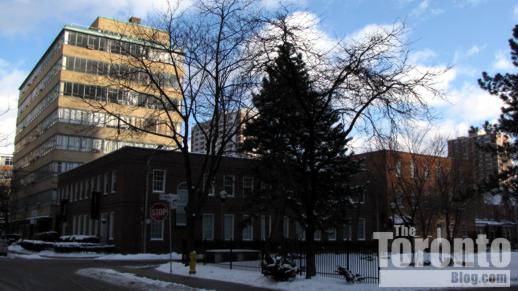 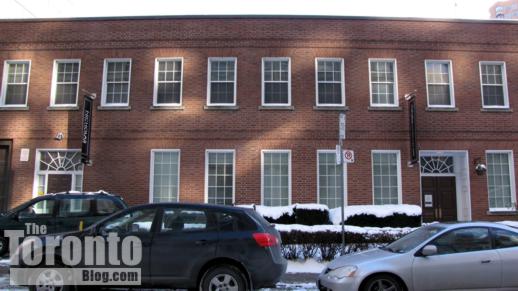 January 9 2011: The north side of 15 St Mary Street, where demolition work on the building interior commenced this week 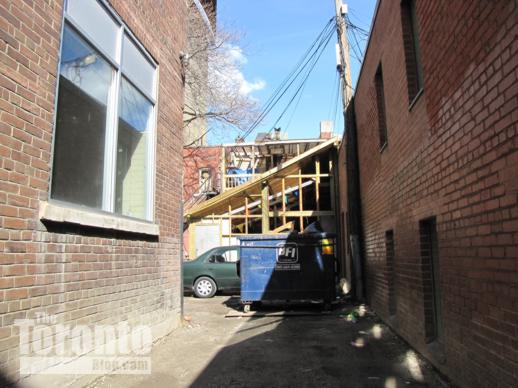 April 1 2011: A laneway between 15 St Mary Street and 67 St Nicholas Street leads to a parking and garbage area behind the buildings. 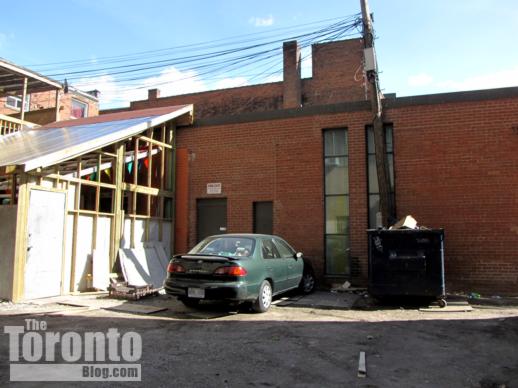 April 1 2011: The small parking area behind 15 St Mary Street, looking south toward the rear one-storey extension of 67 St Nicholas Street. Part of this area will be included in the Nicholas Residences development. 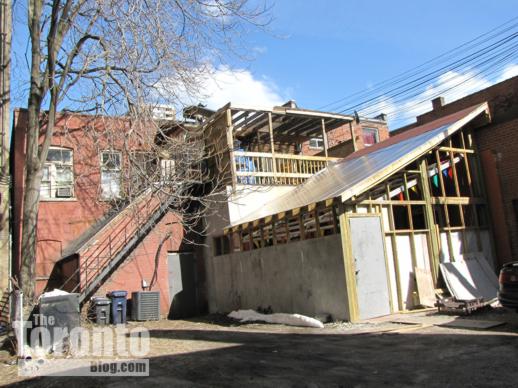 April 1 2011: The Nicholas Residences highrise will tower above these buildings which front on Yonge Street. The building at left houses a Flight Centre travel agency, while the one at right is Zelda’s restaurant (the tacky structure with the sloped roof shelters an outdoor dining terrace).