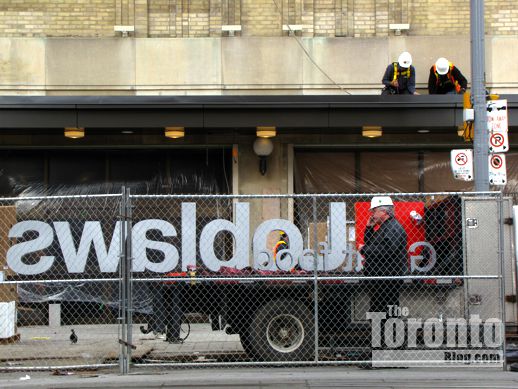 November 20 2011: Crews prepare to install a Loblaws sign on the south side of Maple Leaf Gardens at the corner of Church Street… 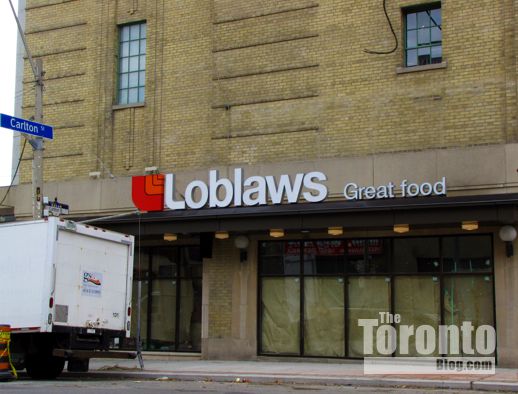 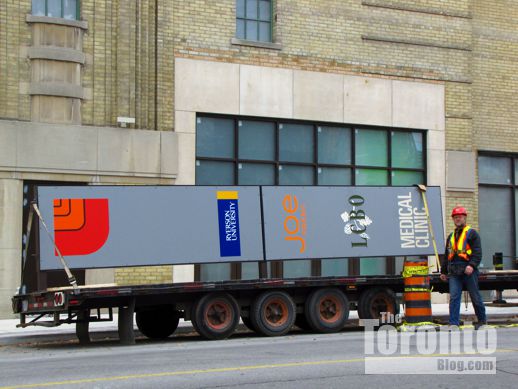 … while yet another sign listing all the new tenants of the renovated heritage building sits on a flatbed truck, awaiting installation at the Gardens’ northeast corner at Church and Wood Streets

Month-end opening: The public will get its first peek inside the revitalized Maple Leaf Gardens on November 30 — the day the new flagship Loblaws grocery store will officially open its doors for business.

Scores of construction crews have been buzzing around the inside and outside of the building this week, hurrying to finish the store in time for its much-anticipated and months-overdue opening. Today, crews were installing Loblaws signage atop a new canopy at the southeast corner of the Gardens, where the grocery store entrance is situated, as well as working on the underground parking garage entrance at the southwest corner of the building. Work also is continuing on the new Maple Leaf Gardens marquee along Carlton Street, and inside the upper levels of the Gardens, where the new Ryerson University Athletics Centre is being built. (Unlike the grocery store, the sports & recreation complex is not scheduled for completion until next spring.)

In a press release issued today, Loblaw Companies Limited said “Toronto’s new crown jewel of food stores” will open at 8 a.m. on Wednesday, November 30.  Although the company is keeping most details about the new store under wraps for now, it did drop “some delectable tidbits about the food experiences that will be found on Food’s Greatest Stage™ under the legendary roof located at 60 Carlton Street.” The media release said some of the store’s highlights include a complete ACE Artisan Bakery, an 18-foot-tall “Amazing Wall of Cheese” boasting more than 400 varieties of cheese from around the world, a patisserie featuring handcrafted chocolate and a huge assortment of pastries baked in-store, a tea emporium, an omelet station, a sushi Bar, and an open kitchen preparing take-home breakfast, lunch and dinner meals.

From what I’ve heard, the Maple Leaf Gardens Loblaws will be the most impressive grocery store in downtown Toronto, providing an unrivalled shopping environment that will dazzle and delight foodies who have been starved for alternatives to the congested and dumpy-looking food stores currently serving the fast-growing condo and apartment neighbourhood. Last week, I spoke to several newly-hired Loblaws employees who had just received their first tour of the historic building where they soon will be working. Since the site is still a construction zone, with crews putting finishing touches on the building’s interior and exterior, they had to wear hard hats and safety boots throughout their orientation tour. But they said the store basically looks set to open, with all shelves already fully stocked with merchandise. Describing the Loblaws as easily “the nicest grocery store” they’ve seen “in all of downtown,” they said customers will be amazed by both the look and feel of the interior as well as the extensive product line-ups that will tempt their tastebuds and pocketbooks.

Below are more photos I took outside Maple Leaf Gardens this afternoon. Photos of earlier construction activity at the iconic hockey shrine can be viewed in my posts on November 3, June 14, April 14, March 29 and February 2. 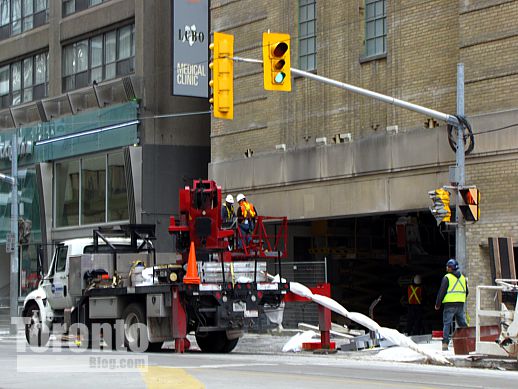 November 20 2011: Crews working outside the parking garage entrance at the southwest corner of the Gardens on Carlton Street 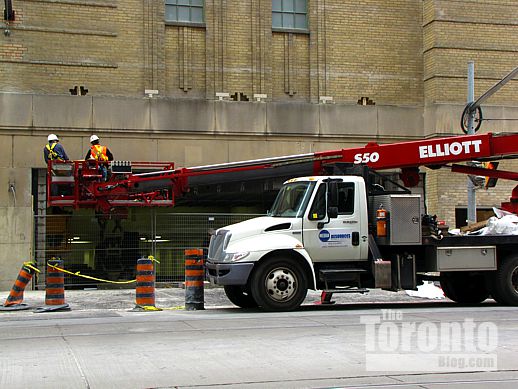 November 20 2011: Workers on a portable crane attend to details on the wall above the underground parking garage entrance. 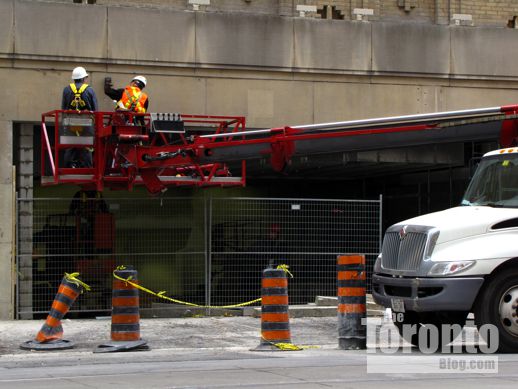 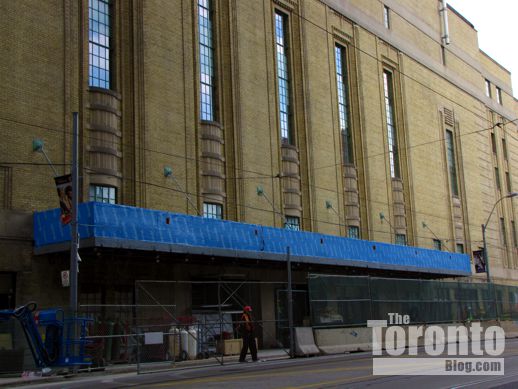 November 20 2011: Work continues on the Carlton Street marquee. The entrance to the Ryerson University Athletics Centre will be here. 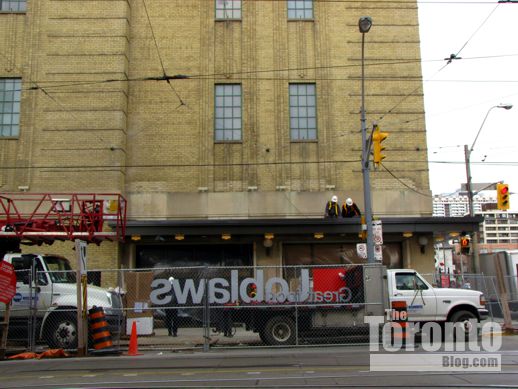 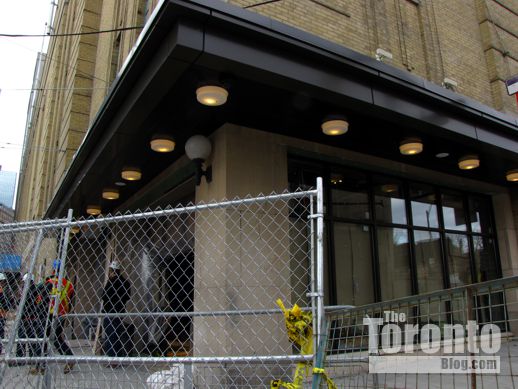 November 20 2011: The new canopy above the Gardens’ southeast corner 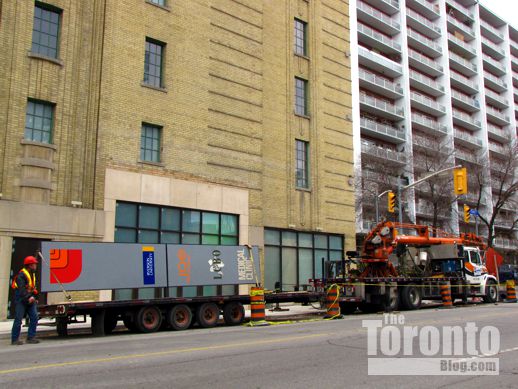 November 20 2011: Workers prepare to erect a vertical sign on the northeast corner of the building, at Church & Wood streets. A Joe Fresh clothing shop, an LCBO liquor outlet and a medical clinic will also be opening soon in the Gardens. 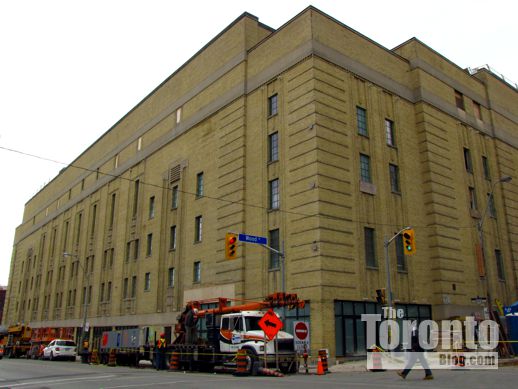 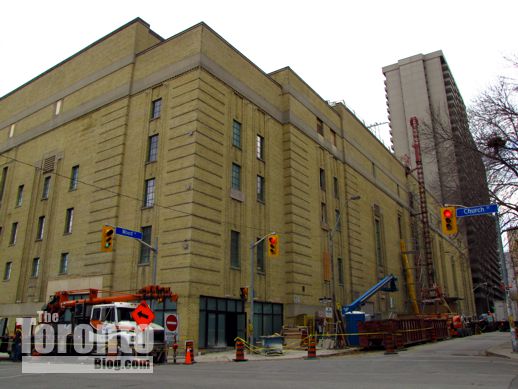 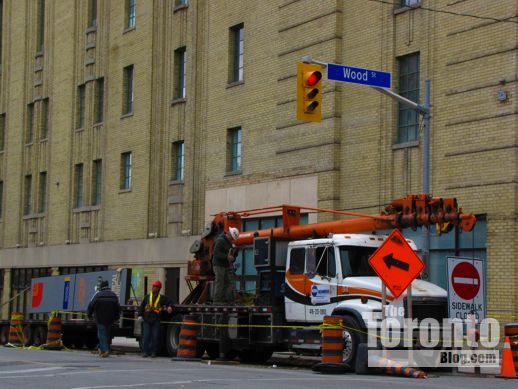 November 20 2011: A crew prepares to install a vertical sign at the northeast corner of the building 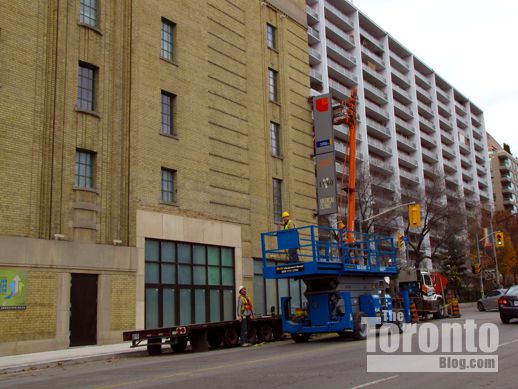 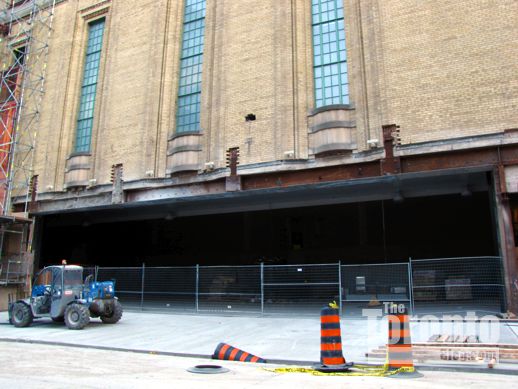 November 20 2011: The service entrance on the north side of the Gardens, along Wood Street, was punched into the brick wall of the historic building. 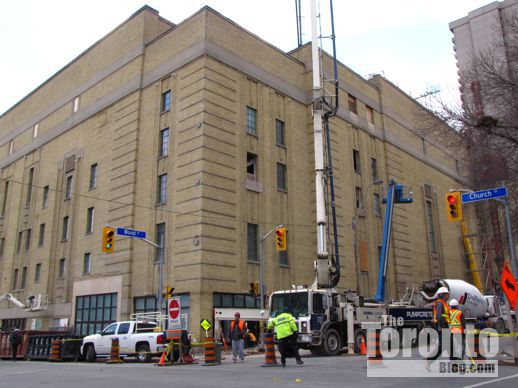 November 17 2011: Construction activity on the north and east sides of Maple Leaf Gardens. On weekdays, the building is constantly surrounded by cranes, equipment supply vehicles, and concrete delivery trucks and pumpers.