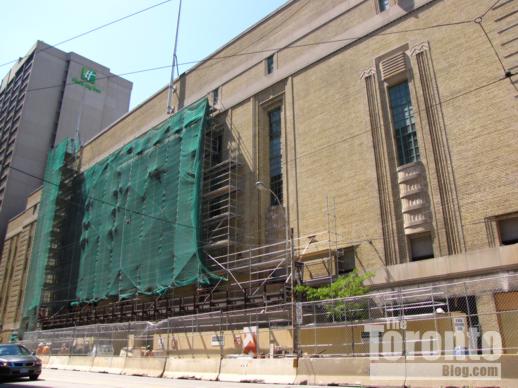 Talking turkey: If all goes according to plan for the Maple Leaf Gardens revitalization project, downtown residents will flock to the historic hockey shrine to shop for Thanksgiving turkeys this fall. Construction of a 70,000 square foot Loblaws grocery store inside the Gardens fell behind schedule this year (it was supposed to be open by now), but I’ve been told that Loblaws anticipates work will finish within the next three months. The goal is to open the store by summer’s end so Loblaws can cash in as shoppers rush to fill their kitchen cupboards for the Thanksgiving holiday weekend. On the other hand, a completion date remains far from certain for the Ryerson University Sports and Recreation Centre, which is being built on two levels directly above the Loblaws store, since substantial construction work remains to be done there. When I got a peek inside the ground level of the Gardens a few days ago, I didn’t think the Thanksgiving target would be achievable.  When I asked one of the site supervisors if work would be finished by October, he chuckled and said: “As we say in construction,  ‘it will be finished when it’s finished.'” But another man in a white hard hat told me that once the “shell” of the grocery store is finished, which he said should happen soon, the grocery store interior will take shape rapidly.

Meanwhile, there’s a lot happening outside the Gardens, too. Scaffolding that has shrouded much of the building’s south wall along Carlton Street is gradually being dismantled as crews complete window installation and work on the brick facade. From street level, the most noticeable change has been the removal of the long blue and silver Maple Leaf Gardens marquee above the main entrance; it will be replaced. Just around the corner, southbound traffic on Church Street is disrupted frequently when portable cranes pull up to hoist steel bars and other building materials for the Ryerson sports complex onto the Gardens roof (a supervisor said that’s how most construction supplies must be loaded into the Ryerson section of the Gardens now that the grocery store has filled out most of the ground level).  The dome atop the Gardens roof is being refurbished, too, and once that is done, a new maple leaf logo will be painted on the broad white surface and Canadian flags will be raised to flutter from the empty rooftop flagpoles. Below are photos I have shot since late April of construction activity outside and on top of Maple Leaf Gardens. To view photos of earlier stages of construction, check out my posts from April 14 2011, March 29 2011, and February 2 2011. 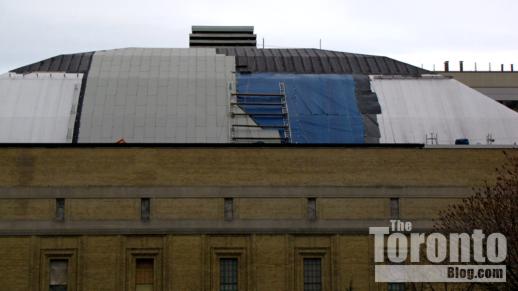 April 29 2011: Roof work underway on the north side of the Gardens’ dome 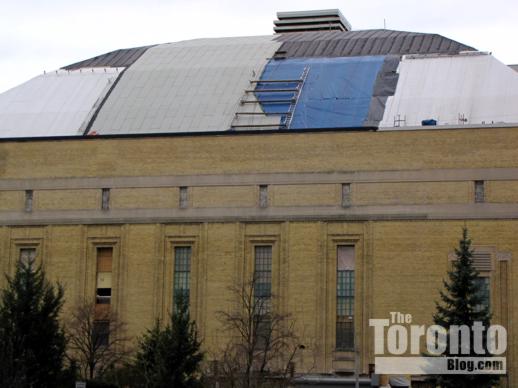 April 29 2011: Another view of revitalization work on the roof of the Gardens 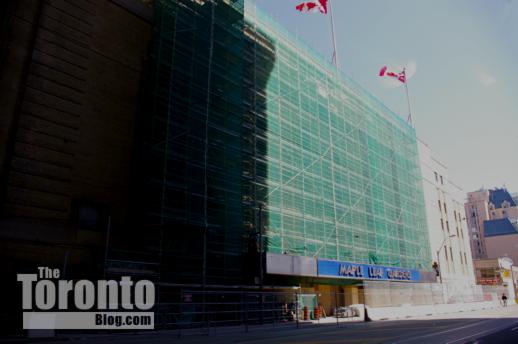 April 30 2011: Scaffolding covers the middle third of the Maple Leaf Gardens south wall along Carlton Street. The Canadian flags and the blue and silver marquee above the main entrance will be removed as work proceeds on the building. 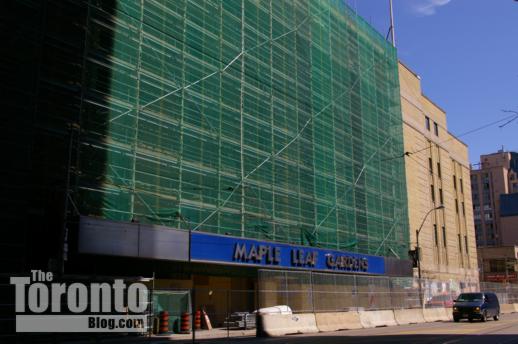 April 30 2011: Scaffolding rises from the marquee above the main entrance all the way to the top of the building’s south wall. 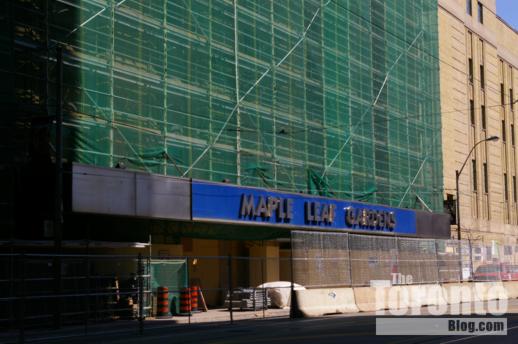 April 30 2011: A view of the main entrance before the marquee is removed 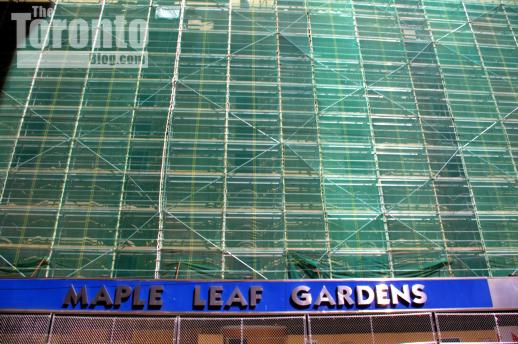 April 30 2011: Window replacement and brickwork is underway behind the shrouds 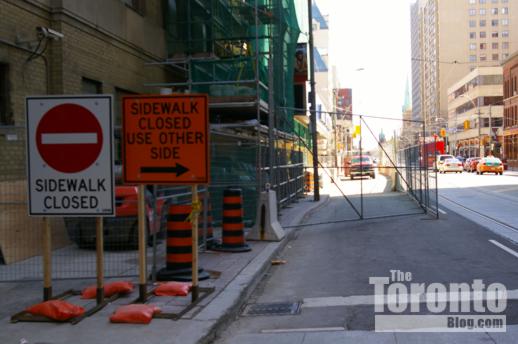 April 30 2011: The sidewalk and one westbound lane on Carlton Street have been closed so crews can finish exterior work on the Gardens 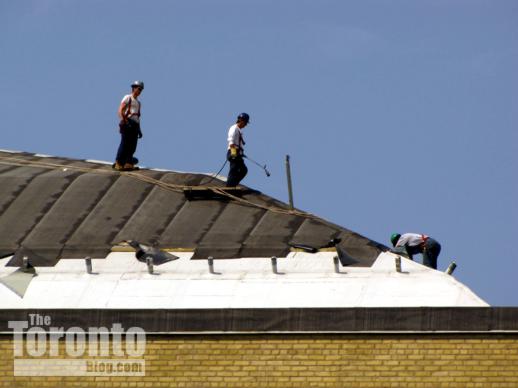 May 13 2011: Construction workers on the roof of Maple Leaf Gardens 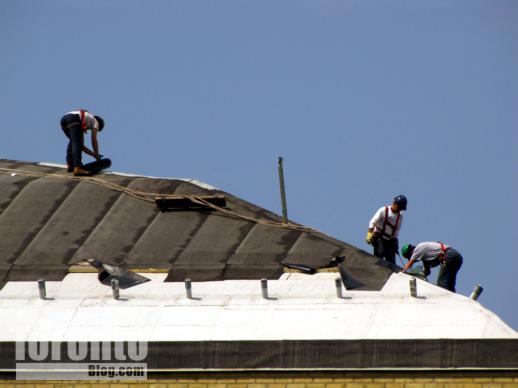 May 13 2011: Workers atop the dome’s northeast corner above Church Street 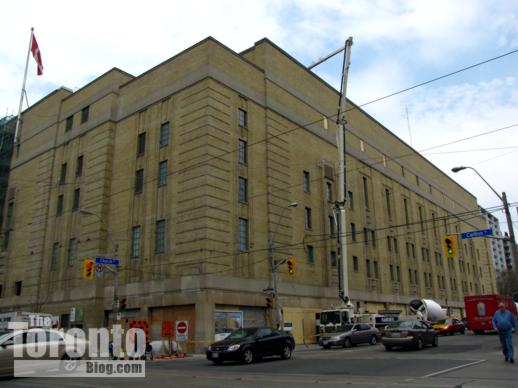 May 13 2011: A truck pumps concrete through the Maple Leaf Gardens roof and into the Ryerson University sports complex being built on the upper two levels 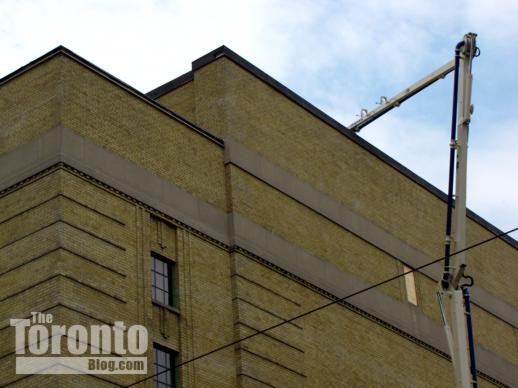 May 13 2011: Concrete pumper above the southeast corner of Maple Leaf Gardens 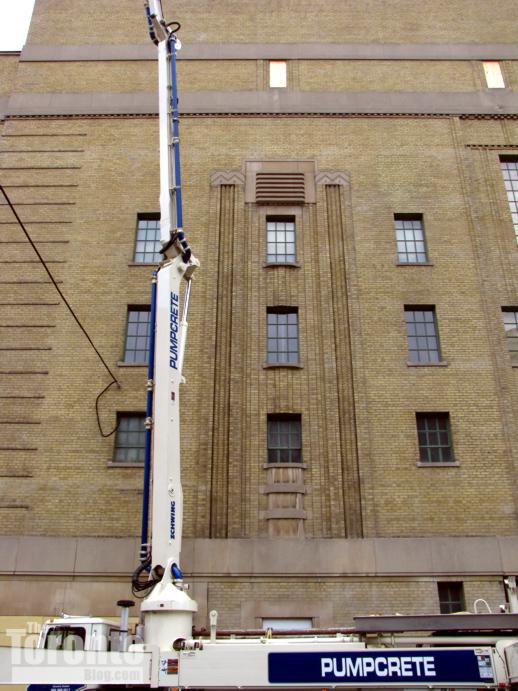 May 13 2011: Pumpcrete vehicle delivering concrete for the sports complex 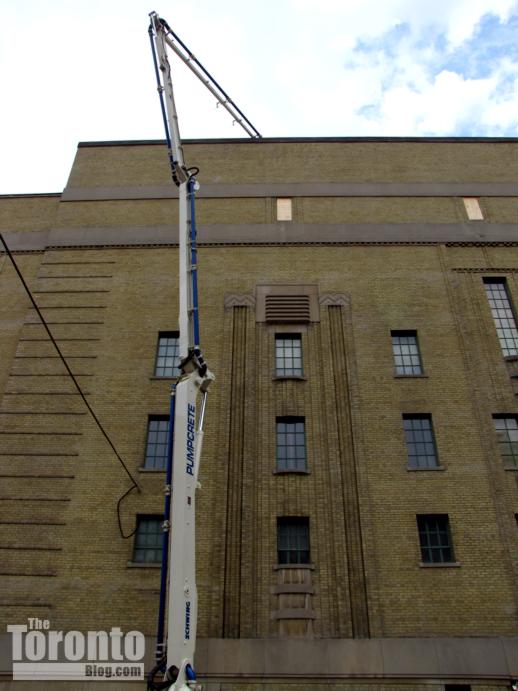 May 13 2011: The long boom of the Pumpcrete truck rises to the roof 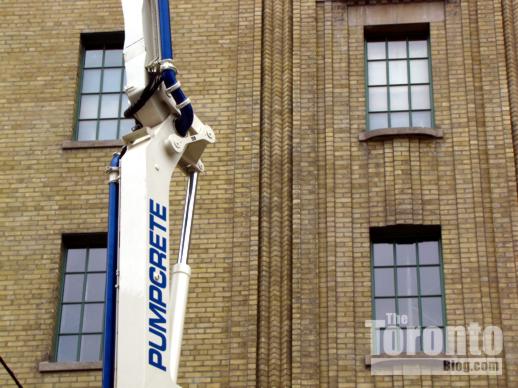 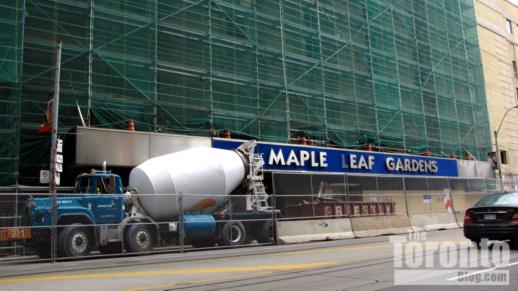 May 13 2011: A concrete truck outside the Gardens’ Carlton Street main entrance 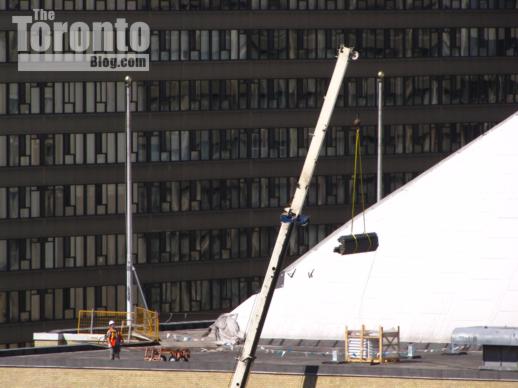 June 1 2011: A crane hoists a load of steel bars to the roof of the Gardens 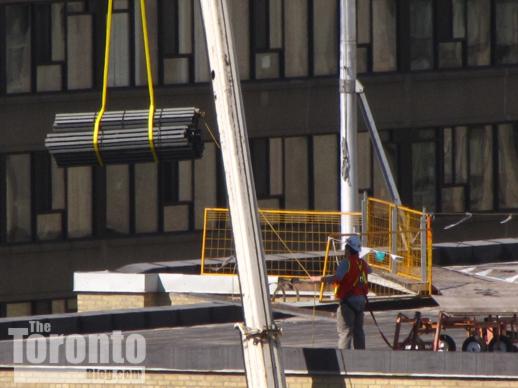 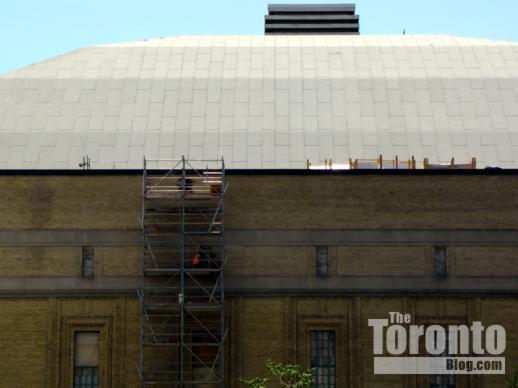 June 3 2011: With the roof recovered, brickwork proceeds on the north wall 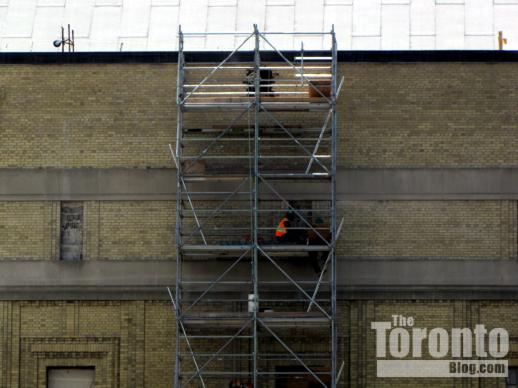 June 3 2011: Workers replace a window on the Wood Street wall of the Gardens 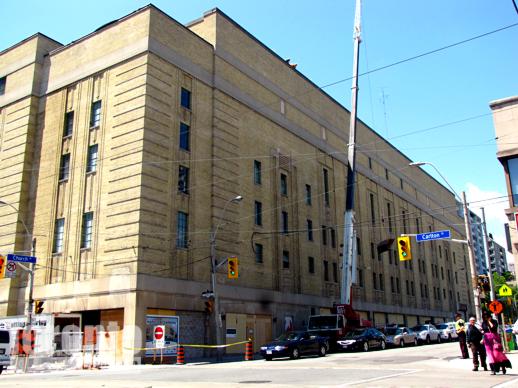 June 14 2011: A crane hoists building materials to the roof of Maple Leaf Gardens 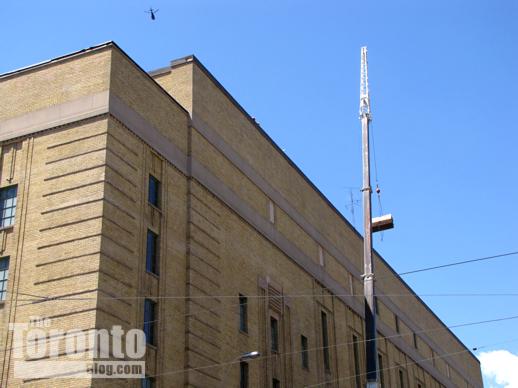 June 14 2011: Another load of construction material rises to the rooftop 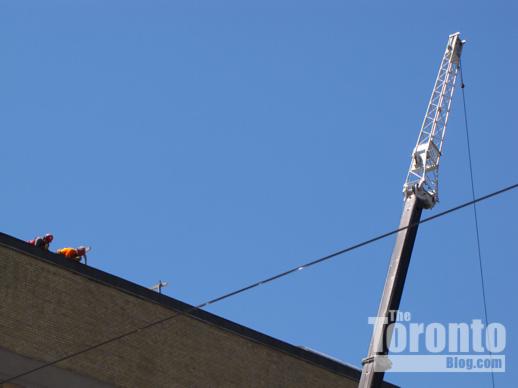 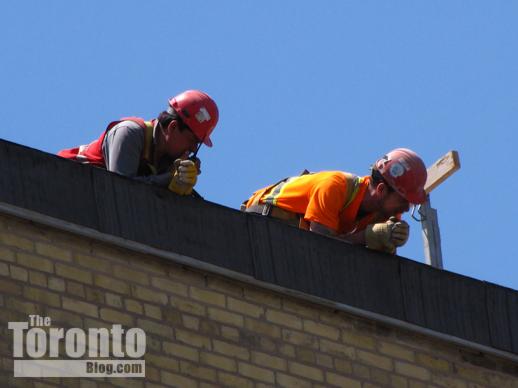 June 14 2011: Workers watch and wait while the crane hoists supplies to the roof 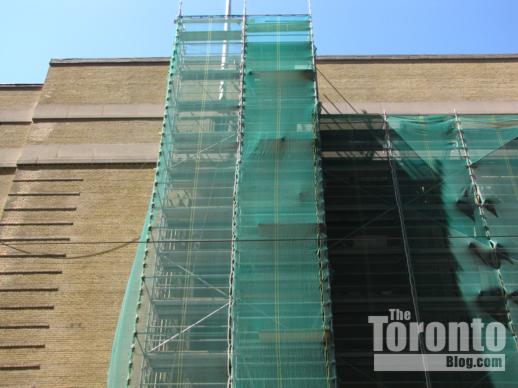 June 14 2011: Scaffolding rises up the south side of Maple Leaf Gardens 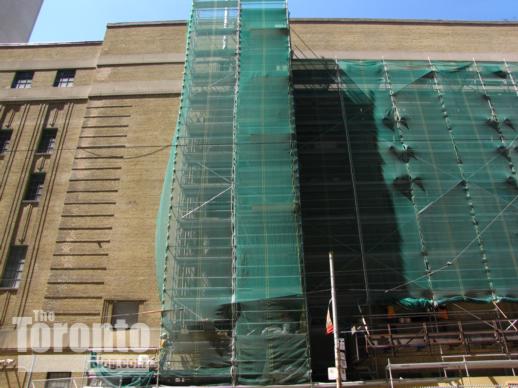 June 14 2011: The scaffolding is gradually being removed as brickwork is finished 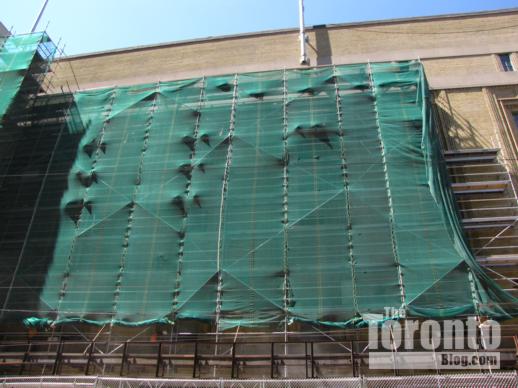 June 14 2011: A metal frame (bottom) is all that remains of the long blue and silver marquee that used to hang above the Gardens’ Carlton Street entrance 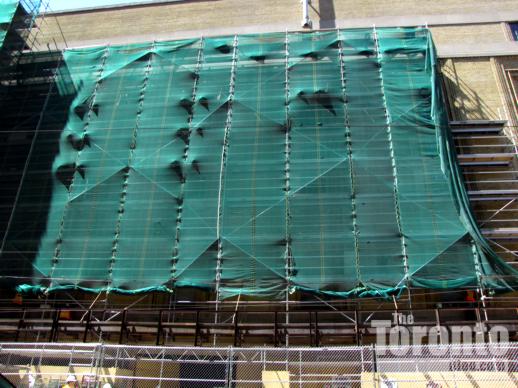 June 14 2011: Another view of scaffolding above the Carlton Street entrance