Photos taken on and around the 501 block of Yonge Street | www.TheTorontoBlog.com 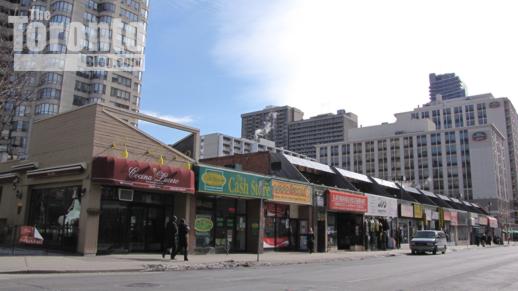 February 20 2011: Restaurants and shops along the 501 block of Yonge Street, viewed from the southwest corner of Yonge and Breadalbane 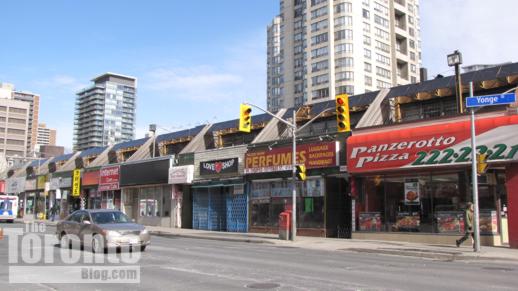 February 20 2011: Looking north toward the 501 block of Yonge Street from the southeast corner of Yonge & Grosvenor Streets

Lanterra land: I wasn’t surprised when a city planner told a neighbourhood association meeting I attended nearly a month ago that Lanterra Developments had purchased the entire 501 block of Yonge Street, from Alexander Street at the south to Maitland Street at the north. I live only a few blocks away and for years have been wondering, each time I have walked past, why someone hasn’t redeveloped the long two-level building with either a bigger retail complex or a condo or office tower. Parts of the block have had a rather shabby and almost run-down appearance for years and, since it’s only two storeys tall on a prime section of the city’s main strip, it looks like it’s practically begging for someone to replace it with something bigger and better.

I always thought it might be impossible to build a larger, taller structure on the site because the Yonge subway line passes beneath part of the property between the Wellesley and College stations. However, the city planner said that while the subway tunnel presents a challenge for redevelopment, it’s not insurmountable. It likely means there would be a very limited amount of space available for underground floors and parking, he said, but above-grade parking levels would solve that problem nicely.

Lanterra hasn’t yet filed a development application with the city, nor has it publicly announced any plans for the site. But I’m keen to see what changes it envisions for 501 Yonge. The upside to redevelopment here is that a Lanterra building would greatly enhance Yonge Street by classing up what is basically a tacky, cheap-looking retail strip. Any civic and private effort to revitalize Yonge between College and Bloor Streets certainly would get a huge boost if Lanterra improved this particular block. The downside is that small independent businesses, like many of the shops and restaurants currently operating here, probably couldn’t afford the significantly higher rents that would be charged for commercial streetfront space in a new development. As much as I’d like to see this section of Yonge Street spruced up,  and even though I don’t care for most of the businesses along this block, I would probably regret seeing them replaced with outlets for ubiquitous international retail chain stores, fast food franchises and coffee shops. There’s already enough of those establishments elsewhere on Yonge and throughout the downtown core. More of them here would detract from Yonge Street’s quirky character and the strip’s unique look and feel.

Below is a link to an online album with a few dozen photos showing all four sides of the 501 Yonge block, the block on the opposite side of Yonge Street, and other nearby buildings.

Editor’s Note: I regret that access to the online album is no longer available. The album had been available on Webshots.com; however, on December 1 2012 the Webshots site was shut down by the company that owns it.