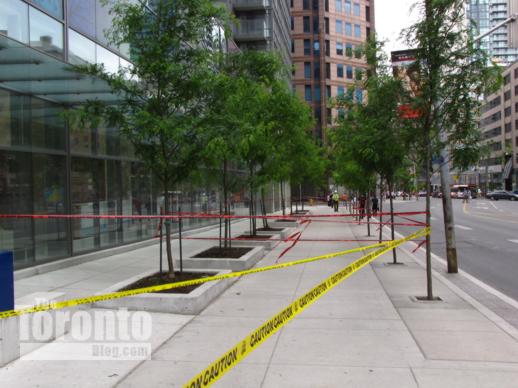 3:15 p.m.: “Caution” tape blocks the east sidewalk on Bay Street, seen here looking south from Grosvenor toward Grenville Street. A security guard told me the sidewalk was closed as a safety precaution after glass fell from one of the Murano condo towers sometime today.

Overhead dangers: The sky isn’t falling this week, but you can forgive many Toronto motorists and pedestrians for thinking that it is. Yesterday, a 10-pound chunk of concrete fell from the Gardiner Expressway onto Lake Shore Boulevard near Bathurst Street, forcing the temporary closure of two lanes of traffic while crews cleaned the road and inspected the elevated expressway for additional loose pieces. (Further information about that is available in a Toronto Star article published today as well as a story that appeared in yesterday’s Globe and Mail.) Then, sometime today, glass apparently fell from one of the Murano condo towers on Bay Street, forcing building management to tape off pedestrian access to most of the sidewalk on the east side of Bay between Grosvenor and Grenville Streets as a safety measure.

Today’s broken glass/sidewalk closure incident is the latest in a series that have occurred at the popular downtown condominium complex for more than a year. A project of Lanterra Developments, Murano is a pair of attractive glass and steel condo towers that soar 45 and 37 storeys above the east side of Bay Street, between Grosvenor to the north and Grenville to the south. As I reported in a January 18 2011 post, there were three occasions last year on which glass balcony panels either shattered or loosened and fell from the towers. In April 2010, a balcony panel apparently plunged from one of the towers, smashing and cracking several panes of a glass canopy that extends along the condo building exterior above the Bay Street sidewalk.  When two more balcony panels broke last September the local media took note, with the Toronto Star publishing a September 18 2010 report headlined “Shattered glass rains down from condo tower.” Just before Christmas, I noticed that a balcony panel on the south side of the North Tower had been replaced with a piece of wood, while in late January I saw a board on yet another balcony on the other side of the same tower (see my February 2 2011 post for photos of that, as well as pics of a temporary wood panel on a balcony at the 46-storey Casa Condominium on Charles Street East).  There were no reports of injuries in any of the incidents. For most of 2010 and much of this past winter, however, scaffolding was kept in place to protect pedestrians using the sidewalks outside the Murano towers. Meanwhile, replacements for the broken and cracked panels on the canopy above the sidewalk were not installed until sometime in April of this year.

Early in May, I noticed that most of the scaffolding had been removed from the sidewalks, while just a week or two back I saw that the sidewalks were completely clear for the first time in many months. When I was heading north on Bay Street in midafternoon today, however, I encountered yellow and red “caution” tape that had been strung across the trees in front of the Murano complex, blocking most of the sidewalk from pedestrian use. Only a narrow section, with barely enough room for two pedestrians to pass each other, remained open alongside the curb. A disabled man in a motorized wheelchair came along and noticed, to his chagrin, that the section of sidewalk still open for passage was not wide enough for his chair. He proceeded to drive under the “caution” tape, which snagged on his headrest and ripped away from the trees as he rode up the middle of the sidewalk. A security guard wearing a white hardhat came racing toward him, gesturing for the man to drive his wheelchair along the edge of the sidewalk next to the road. “You can’t go up here! It’s dangerous!” he warned.

When I asked why the sidewalk was taped off, the security guard said it was because “glass fell from the tower.” He did not know whether the glass had fallen from a broken window or a balcony panel. All he could tell me was that glass had fallen to the street and the sidewalk had been cordoned off as a safety precaution. “It’s very dangerous for you here,” he told me, before scurrying down the street to replace the tape that had been torn loose by the wheelchair (several pedestrians had started walking up the middle of the sidewalk since the tape was no longer in place to indicate it was off-limits.) I didn’t see broken glass anywhere on the sidewalks; if there had been any, it had already been swept up. A police car was parked on Grosvenor outside the entrance to the Murano North Tower but, apart from the “caution” tape, there was nothing to suggest anything “dangerous” had happened. Nevertheless, I wonder if I’ll once again see scaffolding above the sidewalk next time I walk past the Muranos?

Below are two more pics showing the taped-off sidewalk today, along with photos I took during the winter of the missing and cracked canopy panels and their replacements. 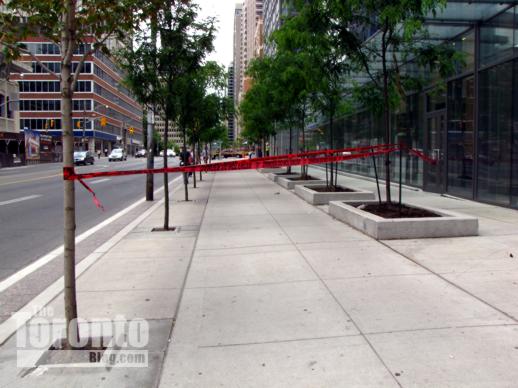 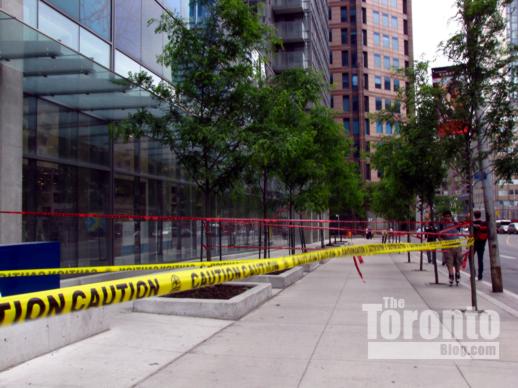 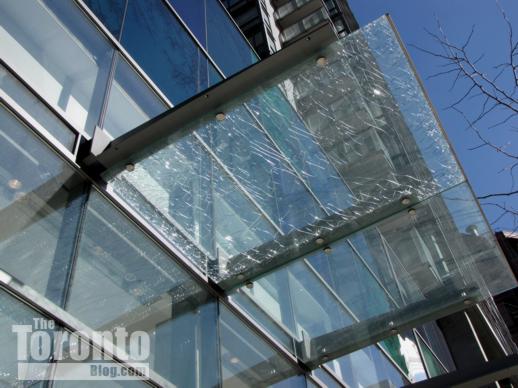 March 29 2011: One glass panel is cracked and others are missing from the canopy that extends above the sidewalk from the west side of the Murano towers 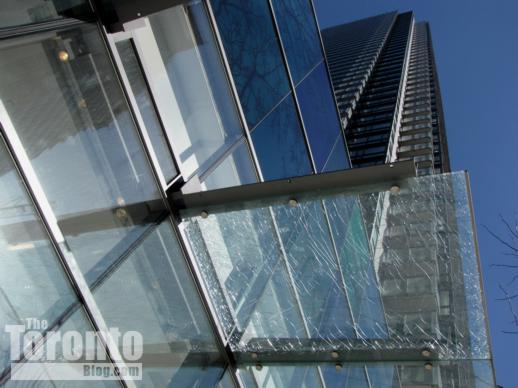 March 29 2011: Looking up at the 45-storey Murano Condos South Tower through the space where a panel is missing from the canopy above the Bay Street sidewalk 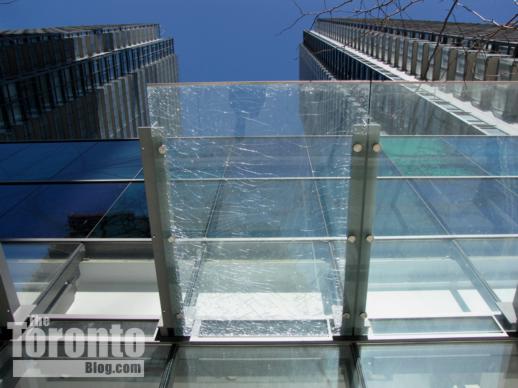 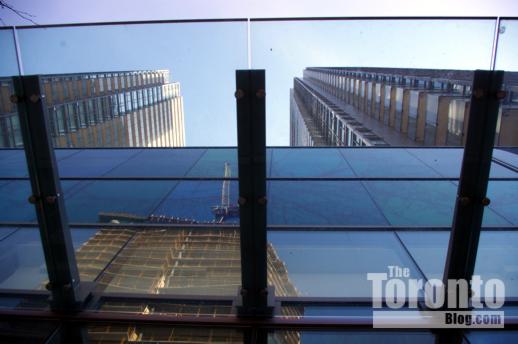 April 30 2011: New panels have recently been installed in the canopy 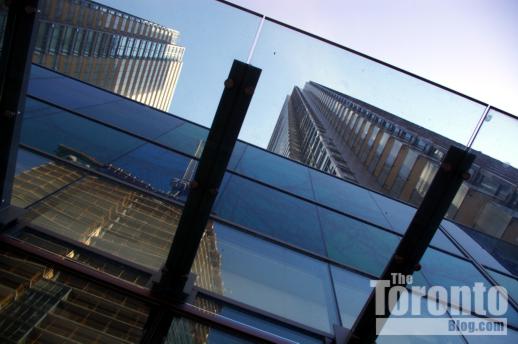 April 30 2011: The glass podium of the Murano towers reflects the Burano condo tower — another Lanterra Developments project — currently under construction on the west side of Bay Street