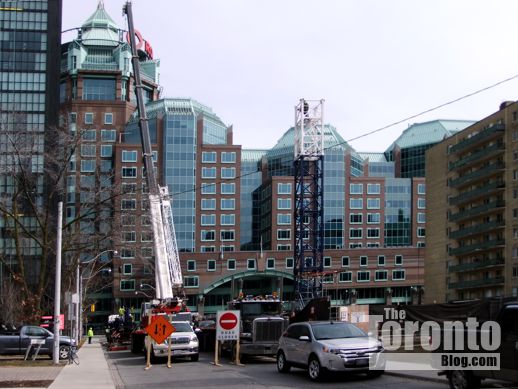 March 10 2012: Charles Street is blocked to traffic while a portable crane installs the fixed-position construction crane that will build X2 Condos 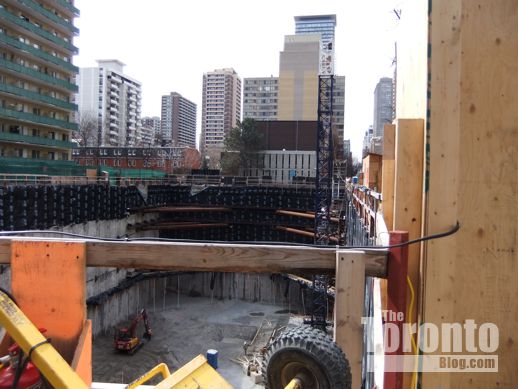 March 10 2012: The crane is being installed in the northwest corner of the 5-level-deep excavation for the 49-storey condo tower 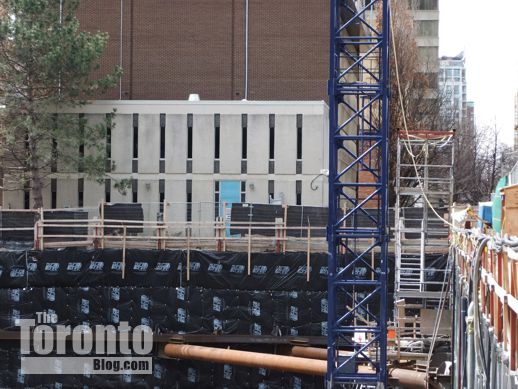 March 10 2012: The blue lower half of the crane rises from the deep excavation only meters from the south side of Charles Street

Assembly day: Another construction crane is rising on the city skyline today, joining dozens of other cranes already working on major condo, office and other building projects throughout the downtown core. The new crane will soar skyward above Jarvis and Charles Streets, where it will help construct the  X2 Condos tower for developer Great Gulf Homes.

X2 Condos will be a 49-storey tower designed by Toronto’s Rudy Wallman Architects Inc. It will be a “sister” skyscraper to Great Gulf’s highly popular X Condos, a 44-storey tower which opened for occupancy in the summer of 2010 just a stone’s throw away on the north side of  Charles Street. (X Condos was designed by a different architectural firm, Peter Clewes and his team at architectsAlliance of Toronto.)

One thought on “Crane installation underway at X2 Condos site”