In 2010, Lifetime Developments and CentreCourt Developments announced plans to develop properties they had acquired on Grenville Street — including the Irwin house. Acting on recommendations in a February 7 2011 report by city planners, the City passed a bylaw formally designating 21 Grenville as a historic property under Ontario’s Heritage Acton December 1 2011.

(A heritage listing gives the city power to review building applications pertaining to the property, and requires the owner to give the City 60 days’ notice of intention to demolish. A heritage designation, on the other hand, confers a stronger legal status on a property, giving City Council the authority to refuse a development application that would “adversely affect the property’s heritage attributes.” To further protect historic buildings, the City also has powers to enter a Heritage Easement Agreement with a property owner. Such an agreement, which is registered on title, will identify elements of a historic building that must be “retained in perpetuity,” and  can specify which types of alterations or redevelopments are permissible.)

Although the back of the Irwin building has been destroyed, a heritage easement agreement will ensure that the front section of the house survives — but in a different location. It will be moved several dozen meters east to the corner of Grenville Street and St Luke Lane, where it will be transformed into a retail space component of the Karma condo complex.

But its new lease on life won’t start for possibly three to four more years — the approximate time it will take to construct Karma.

Karma has a relatively short but convoluted planning history that began in 2010.  In February and May of that year, representatives of Lifetime and CentreCourt held preliminary meetings with city planning staff to discuss their intention to build a 46-storey condo tower at 9-21 Grenville. In June, the developers filed a site plan application for a 46-storey building and in September applied to the city’s Committee of Adjustment for a zoning variance to permit construction of the 46-storey tower. The committee refused the variance request, and the developer appealed the decision to the Ontario Municipal Board. (It didn’t proceed with the appeal, however, and resumed discussions with the city through the rezoning application process instead.)

In the fall of 2010, the developers held three more preliminary meetings with city planners to further discuss redevelopment plans for the site. City planners expressed concerns about the proposed tower’s height and density as well as setbacks from nearby buildings. But in December, the developers submitted a formal redevelopment application proposing an even taller tower — a 52-story building that would rise 167 meters and retain the John Irwin House on its original site at the northwest corner of the property (see my March 12 2011 report for further details).

On February 9 2011, city planners held a community consultation to get feedback about the Karma project. Like city planners, neighbourhood residents voiced serious concerns with the proposed tower height and density, and the project’s potential impact on traffic in the area. Ward 27 Councillor Kristyn Wong-Tam convened a series of working group meetings so that residents’ representatives could discuss their concerns directly with the developers and see if a compromise could be achieved. Four working group meetings took place between March 24 and June 30, but residents remained resolute in their position that a 52-storey tower was far too tall for the site.

In July 2011, to the residents’ chagrin, the developer submitted a revised application proposing a 169-meter, 52-storey tower containing 487 units.

City planners believed that while 52 floors was too high, a slightly shorter tower with 60 fewer condos would be appropriate for the location. In a September 15 2011 report, they recommended that City Council approve a 46-storey tower with 427 units. They also recommended that the developer be required to sign an agreement, under s. 37 of the Ontario Planning Act, to pay the City $1.8 million for improvements to nearby subway stations and streetscapes. These funds, which would have to be paid before the first above-grade building permit would be issued, would include $950,000 for “improvements to the College Subway station and Wellesley Subway station, $500,000 towards the upgrade of St. Luke Lane and $350,000 towards widening the sidewalks on Grenville Street and Wood Street.” Toronto and East York Community Council adopted the report at its October 4 2011 meeting, and Toronto City Council voted to adopt the TEYCC’s recommendations at its meeting on October 24 2011.

In the meantime, however, the developers filed an appeal with the Ontario Municipal Board on two technical legal grounds. They maintained that City Council had not made a decision on their rezoning application within 120 days, or on their site plan application within 30 days, as required by Ontario planning law.

Although the OMB scheduled a pre-hearing conference for December 15 2011, and a hearing for January 30 2012, the developers continued discussions with Councillor Wong-Tam. Area residents were taken aback when the Councillor subsequently proposed a motion calling on City Council to approve a 50-storey building with 495 units, 42 of which would have to be “capable of being designed as three-bedroom dwelling units.”

Under the terms of Councillor Wong-Tam’s motion, which went before City Council at its November 29 & 30 and December 1 2011 meetings, the developer would have to pay the City $2.8 million under s. 37 of the Planning Act. Just $800,000 would have to be paid prior to issuance of the above-grade building permit, and that money would be allocated for “Yonge Street and local area street improvements.” The remaining $2 million would not have to be paid until several years down the road, when Karma applies for official registration as a condominium corporation. At that time, the developers would have to pay “$1,130,000 towards Yonge Street and local area streetscaping improvements; $500,000 towards the upgrade of St. Luke Lane ; $350,000 towards widening of sidewalks on Grenville Street and Wood Street ; and $20,000 towards LOFT Community Services for building improvements, or towards the works described above if such improvements are not feasible.” City Council voted to pass the motion.

At the December 15 2011 pre-hearing, the OMB accepted the settlement that had been reached between the city and the developer, and formally issued an order confirming this decision on March 7 2012.

Stellar sales in only three months

While all the planning discussions and political decision-making processes were taking place, the developers opened a presentation center on the Grenville Street site, and launched sales for Karma condos. From a sales perspective, Karma was an enormous success: the presentation center opened in October 2011 and disappeared from the property by early February 2012. Media reports said over 95% of the condo units had been sold in less than three months.

The building will include 5 levels of underground parking, two guest suites, and amenity facilities on the second and third floor including: fitness and steam rooms; party room with fireplace and private dining room; projection room; a “pub like” Players Club lounge with billiards and table tennis; and an open-air rooftop terrace with a lounge and BBQ facilities.

Below is a series of photos I’ve shot at the Karma site since last year. 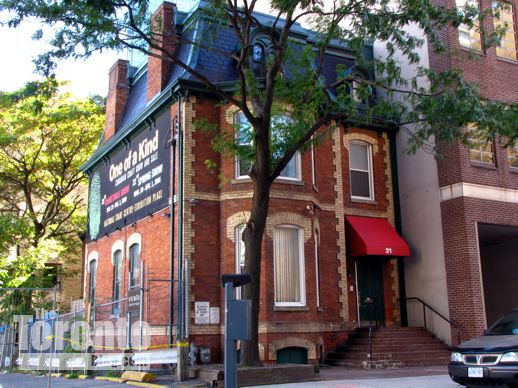 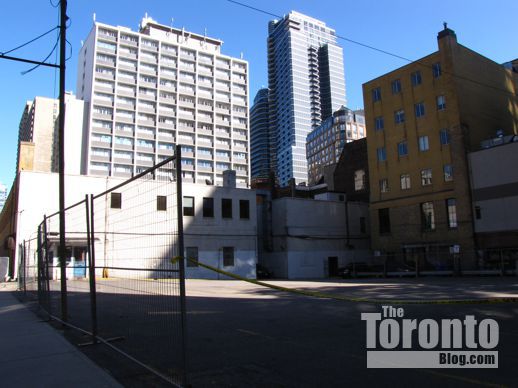 October 1 2012: The parking lot next to the John Irwin House has been fenced off as the developers prepare to open a sales presentation center for Karma condos 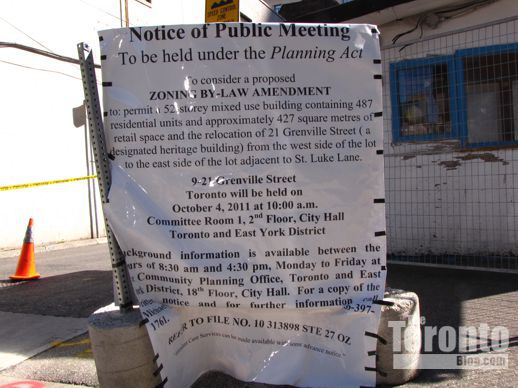 October 1 2011: A battered city planning sign on the Karma site 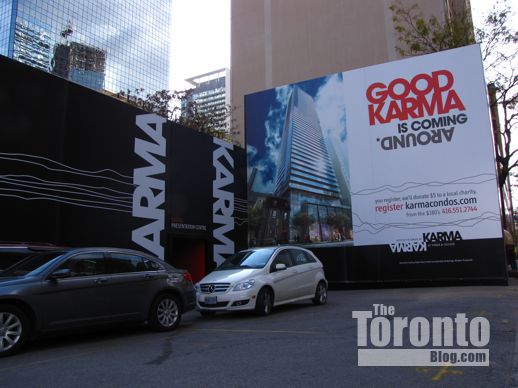 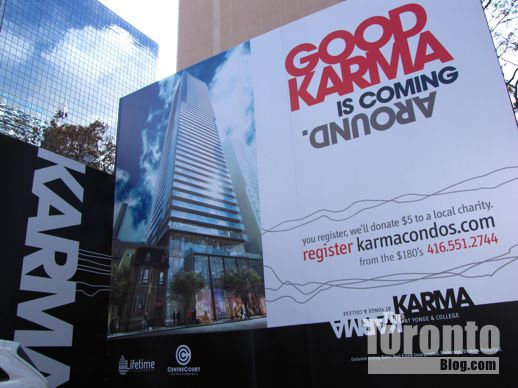 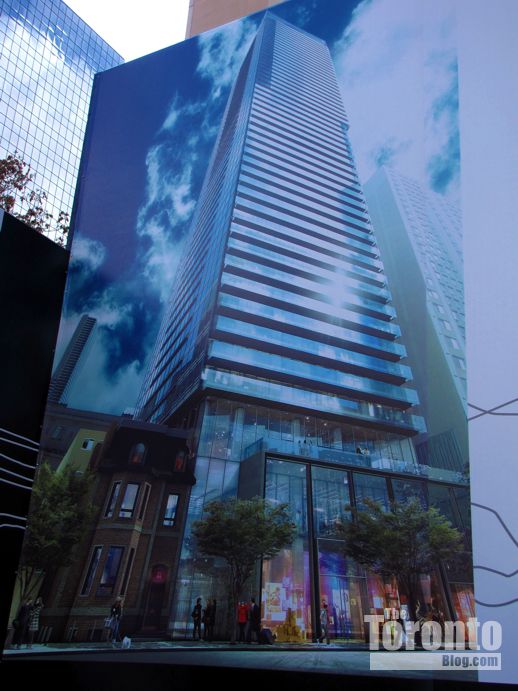 October 29 2011: Many neighbourhood residents were incensed that this giant billboard blocked the John Irwin House from sight 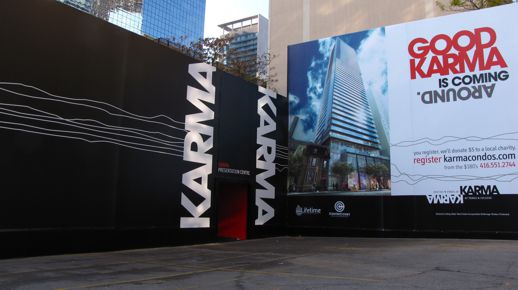 November 1 2011: This was the only time I was able to photograph the sales center with no vehicles parked in front 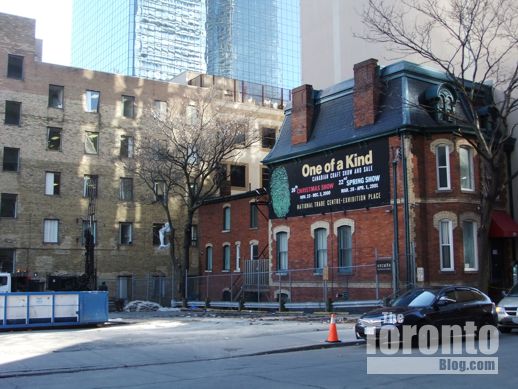 February 6 2012: After only three months of brisk sales, the presentation centre has been dismantled and the John Irwin House is visible from the east once again 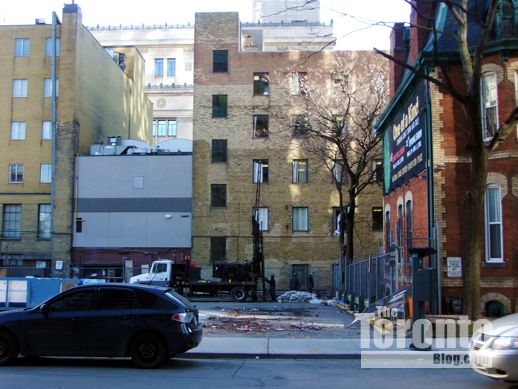 February 6 2012: A drilling crew works near the southwest corner of the Karma site 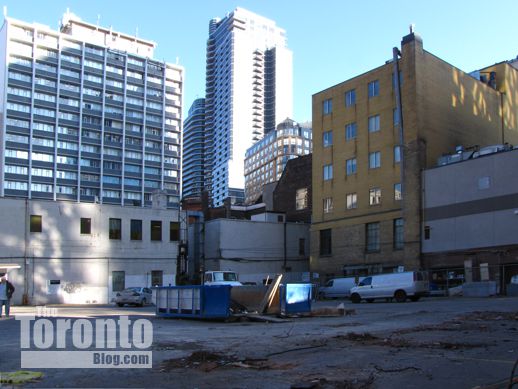 February 9 2012: Although the presentation center has been removed, the parking lot still hasn’t been re-opened for public use 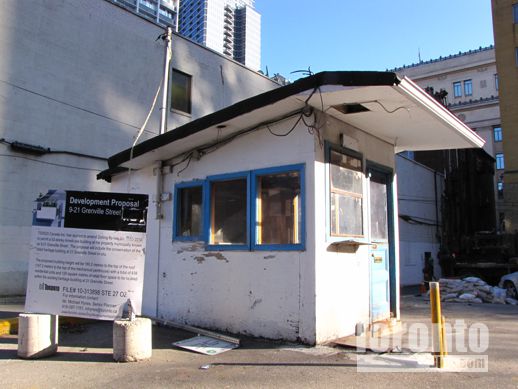 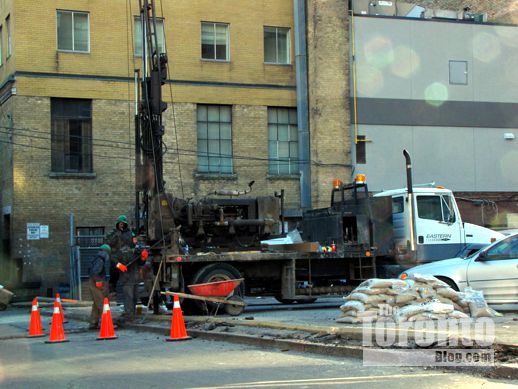 February 9 2012: The drilling crew works at the southeast corner of the Karma site 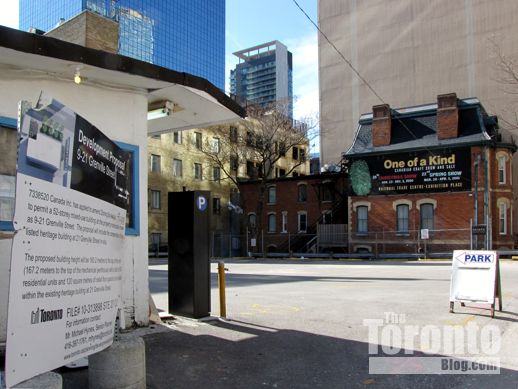 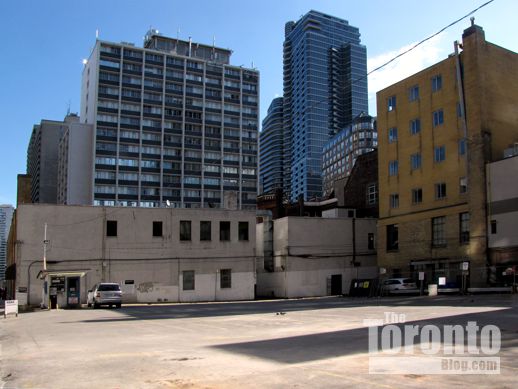 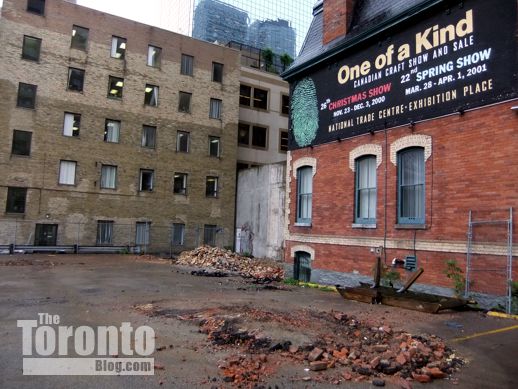 August 27 2012: Looking toward the southwest corner of the property, where the rear addition to the John Irwin House has been demolished 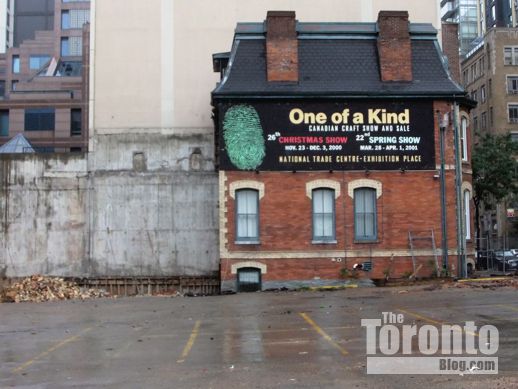 August 27 2012: West view across the parking lot toward the Irwin House 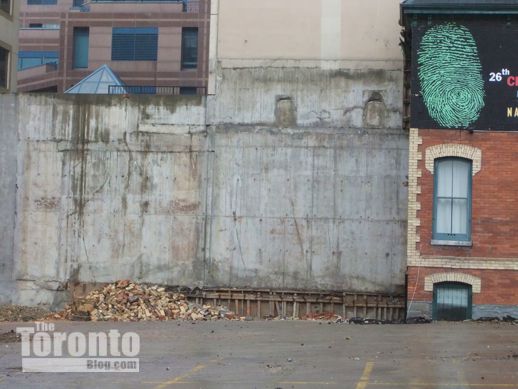 August 27 2012: A closer view of the empty space where the addition once stood