The 930,000-square-foot building is scheduled for occupancy in late 2014. The tower originally was designed to achieve LEED Gold certification; however, the developer announced earlier this summer that its team of architects, engineers and other building professionals are now striving to obtain LEED Platinum core and shell certification. If achieved, RBC WaterPark Place would become the first Toronto office tower to receive LEED Platinum accreditation. The building will feature deep lake water cooling, a green roof and many more energy-efficiency features.

The building will occupy a rectangular piece of property bounded by the two existing WaterPark Place towers on the east; Queen’s Quay Boulevard on the south; a public park and and the York Street off-ramp from the elevated Gardiner Expressway on the west; and Harbour Street on the north. As part of the office tower construction, an enclosed, elevated pathway will be built above Harbour Street to link the entire WaterPark Place complex to Union Station and the city’s PATH system.

This part of downtown, often called the “south financial core,” is undergoing a stunning building boom that will massively transform the look and feel of entire area — as well as the city skyline. Less than a 10-minute walk to the northwest, four major projects are already under construction, including the new Ripley’s Aquarium of Canada beneath the CN Tower; a Delta Hotel highrise and the Bremner Tower office building at the Southcore Financial Centre on Bremner Boulevard; the Infinity3 condominium complex at Lower Simcoe Street and Grand Trunk Crescent; and the 57- and 67-storey ÏCE Condominium towers at 12 and 14 York Street. Even more towers are in the works for the immediate vicinity, including the 75-storey Ten York condominiums, along with a 31-storey office building at 1 York and the two 70-storey condo towers of Harbour Plaza Residences, all three of which would rise on the north side of Harbour Street, directly across the road from the RBC tower.

Below are several several more building renderings that appear on the Oxford Properties project page for the tower, followed by photos I’ve taken of the RBC site and building activity to date. 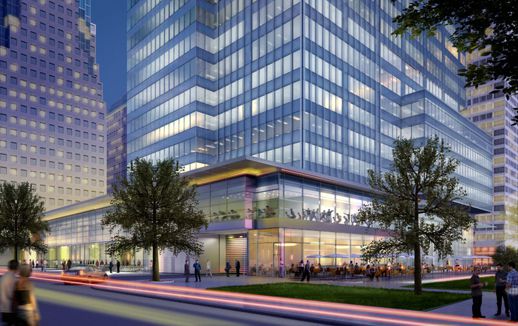 A building illustration from the Oxford Properties  RBC tower webpage 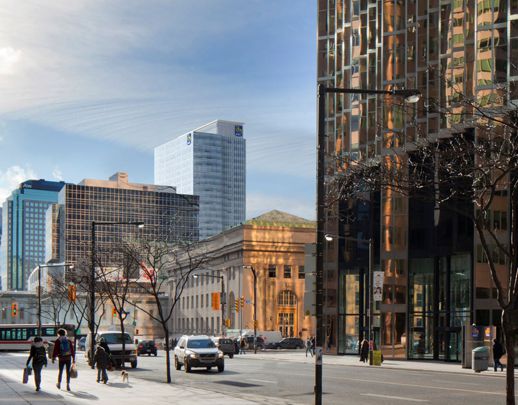 This Oxford Properties illustration shows how the tower will appear when viewed from the north along Bay Street, just below Wellington Street 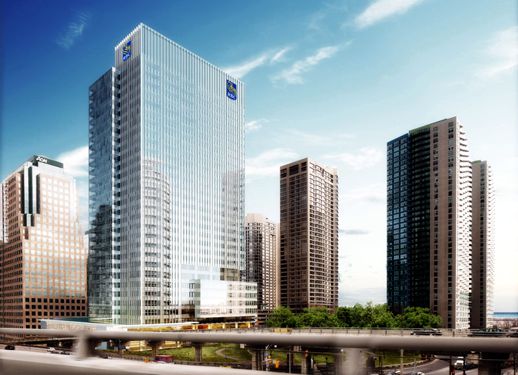 This Oxford Properties rendering shows the elevated walkway that will pass above Lake Shore Boulevard and below the Gardiner Expressway, linking WaterPark Place with Union Station and the city’s PATH system 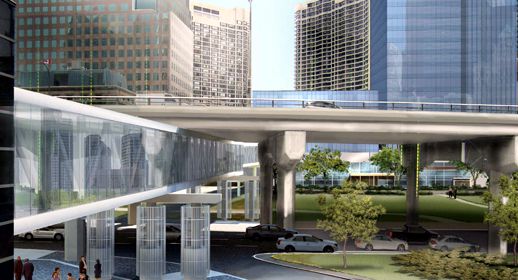 This Oxford Properties illustration offers another view of the elevated walkway 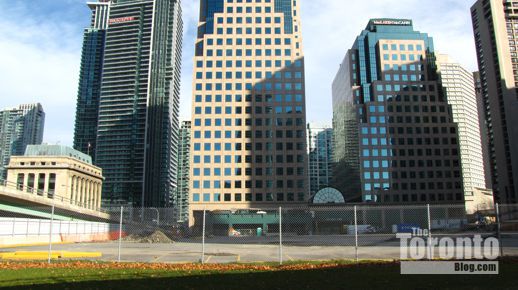 November 25 2011: West view of the RBC tower construction site. The former parking lot has been fenced off, and preliminary drilling work has gotten underway. 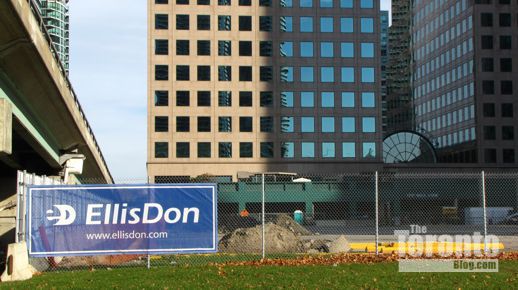 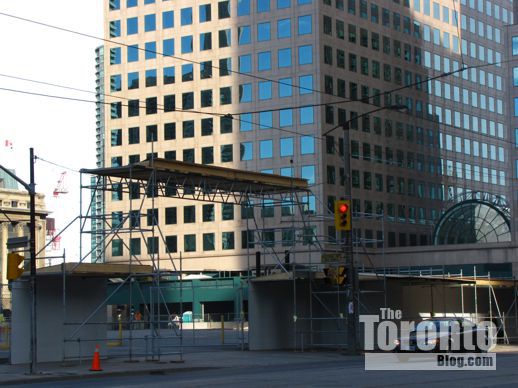 November 25 201: A construction entrance at the southwest corner of the site 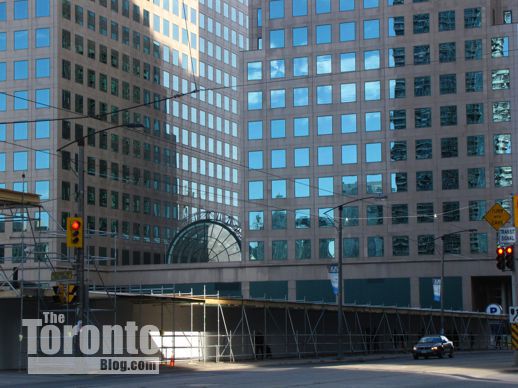 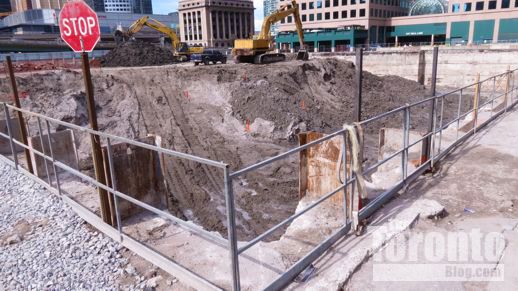 May 10 201: Site excavation activity viewed from the southwest corner 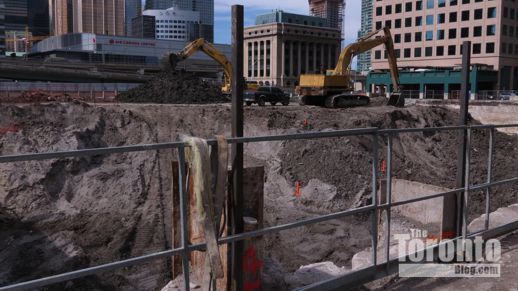 May 10 2012: Looking northeast across the excavation site 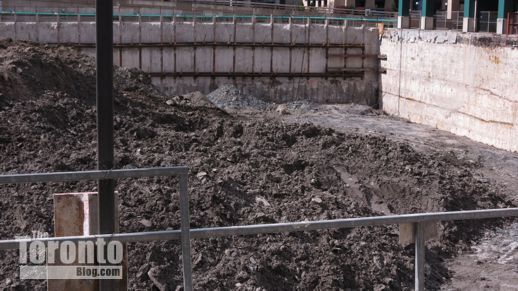 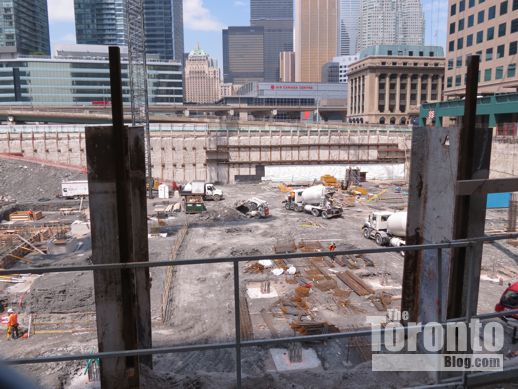 August 15 2012: Excavation is nearly done, and work on the foundation begins 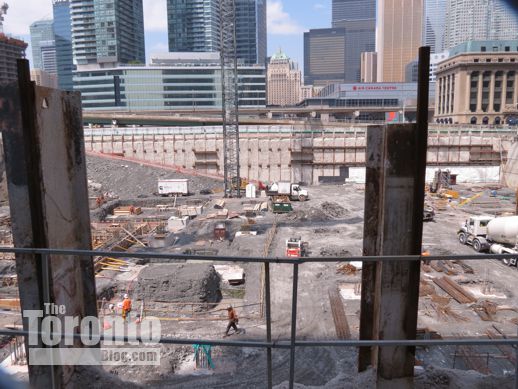 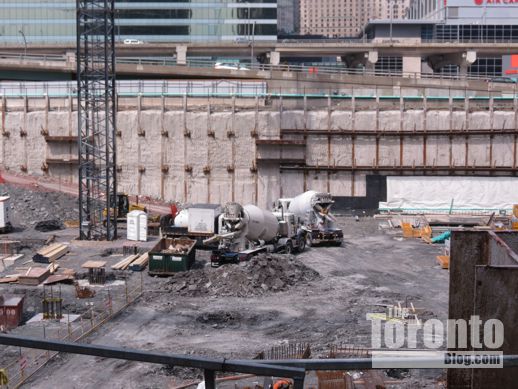 August 15 2012: This construction crane, near the north side of the pit, is one of three cranes working the project 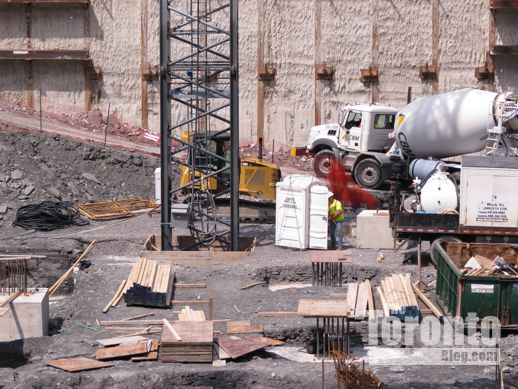 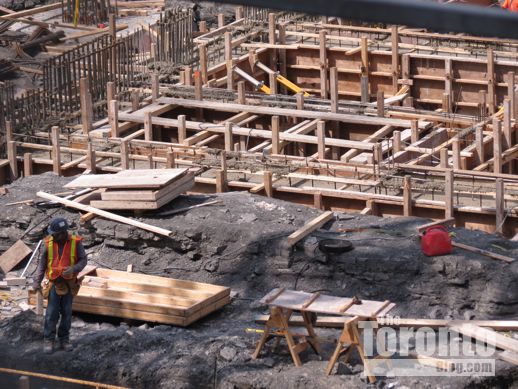 August 15 2012: Building forms on the west side of the construction site 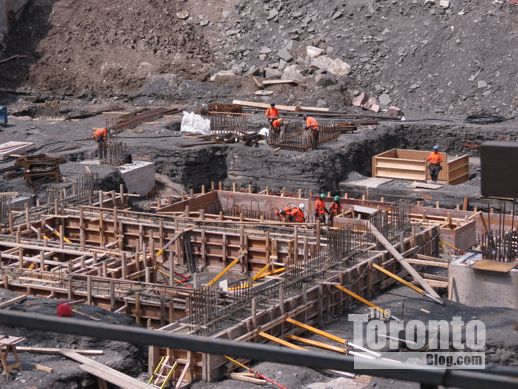 August 15 2012: Construction crews at work in the northwest corner of the pit, just below the truck ramp 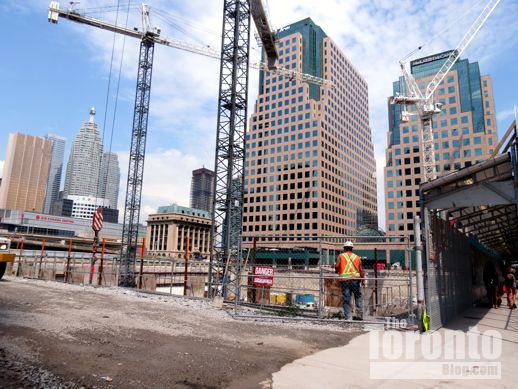 August 15 201: Southwest corner view of the three cranes on the site 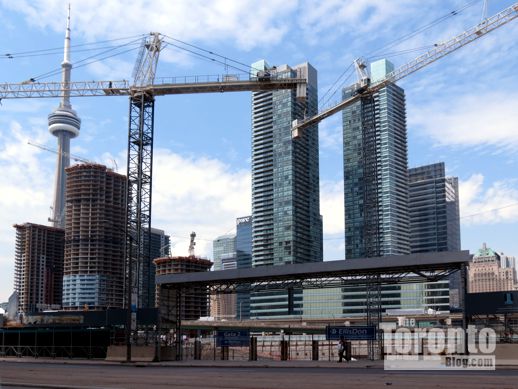 August 15 2012: Two of the construction cranes soar above the RBC tower site. At rear left, the Infinity3 and ÏCE Condominium towers rise below the CN Tower.