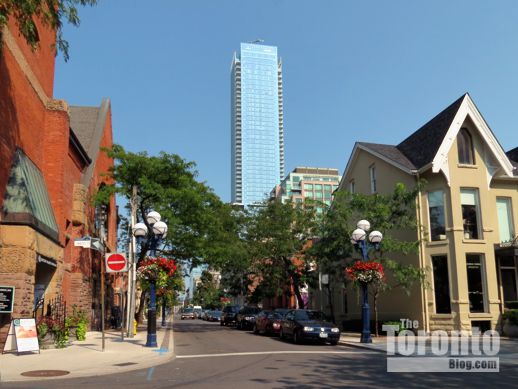 August 31 2012:  The 55-storey Four Seasons Toronto hotel and condo tower viewed from the corner of Hazelton Avenue and Scollard Street

Light & airy: Every time I have looked up at the new Four Seasons Hotel and condo tower in Yorkville, I’ve been amazed that it doesn’t appear to soar 55 storeys high. It does look and feel very tall, of course, but it doesn’t have a hulking, looming or even overwhelming presence like many towers just half its height. I never understood why — until I read “A tower that aims to ‘blend into the sky” in the August 31 Globe and Mail.

In the article, architecture columnist John Bentley Mays relates a conversation he had with the Four Seasons Toronto architect, Peter Clewes of architectsAlliance.

Clewes explains how the skyscraper was designed to be “light on its feet,” achieving “a kind of fading of the tower where it meets the sky.” Different types of glass cladding were extensively researched and tested to see how they would relate to the sky; ultimately, an American-made high-performance glass with no tint was selected.

“We wanted something …. that would take on the character of the sky without being hyper-reflective,” Clewes said, adding that the glass helps the tower “just blend into the sky.”