Further information about the ChazYorkville project, including details of how the project grew from a proposed 33-storey highrise to a 39-storey tower and finally a 47-floor skyscraper, plus photos of the office building that formerly occupied the 45 Charles Street East construction site, can be viewed in my previous Chaz condo reports published on January 30 2011, March 1 2011, November 8 2011, December 8 2011, January 13 2012 and September 17 2012.

Below are several photos showing construction of the crane pad during January and earlier this month, as well as more pics of today’s crane installation. 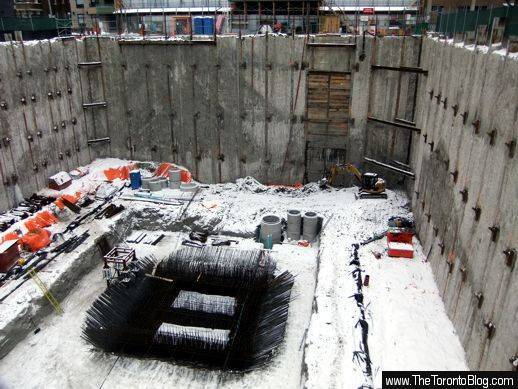 January 27 2012: A view of construction progress at the ChazYorkville site, looking north toward Charles Street 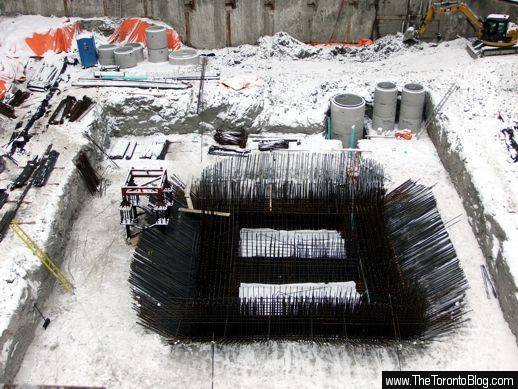 January 27 2013: The base for the crane is taking shape near the upper left corner of the giant rebar form (likely the bottom of the tower’s elevator core). 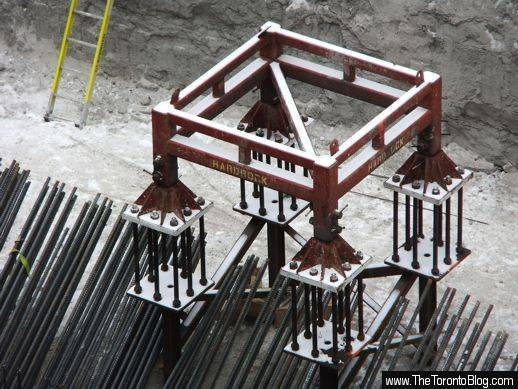 January 27 2012: A closer view of the crane pad under construction at the bottom of the deep excavation for the tower 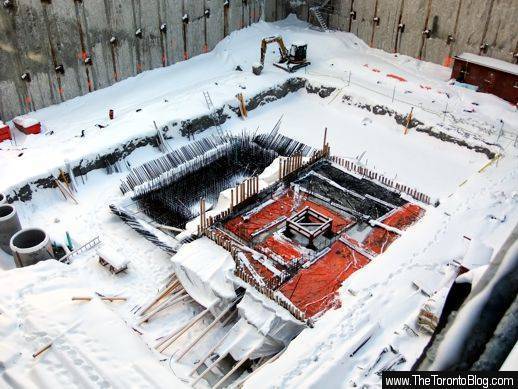 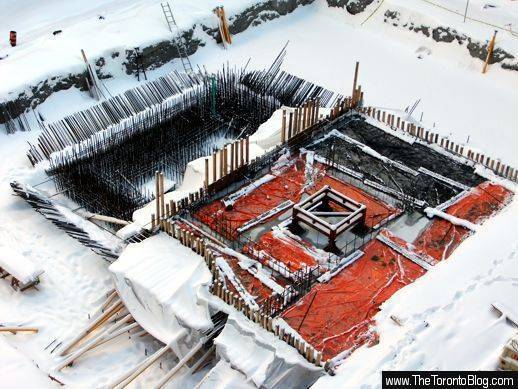 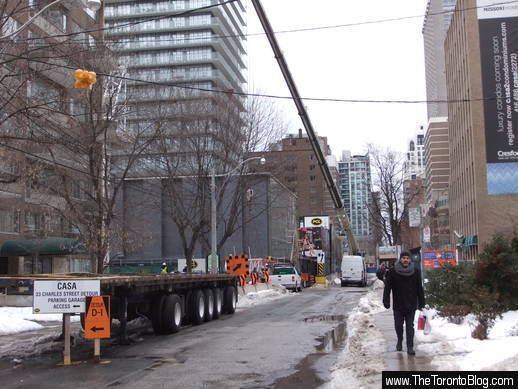 February 12 2013: Charles Street was closed to vehicular traffic between Yonge and Church Streets during the crane installation. Local residents, including those living in the Casa Condominium tower, had to detour along a back lane to access their own buildings by vehicle. 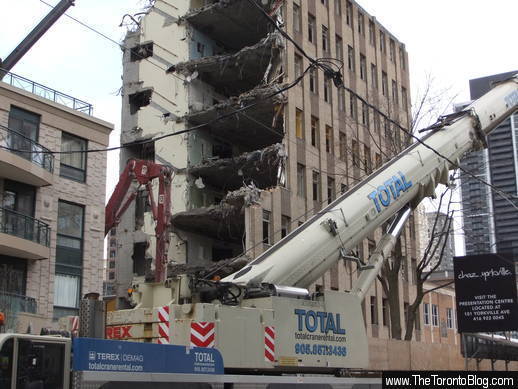 February 12 2013: A view of the big portable crane as it assembles and installs the fixed-position crane for the ChazYorkville construction project. The building being demolished behind it is the former Toronto YMCA headquarters at 42 Charles East, site of yet another condo tower development — the 56-storey Casa2 Condominium. 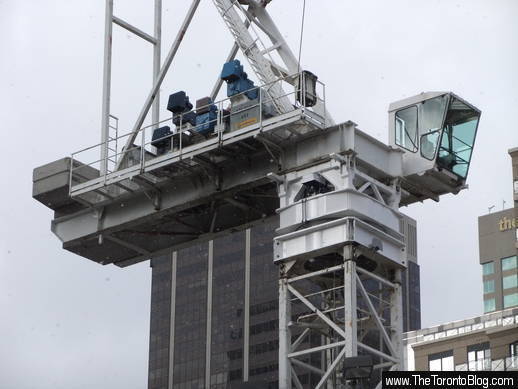 February 12 2013: The operator’s cab and the short machinery arm with counterweights had already been assembled onto the crane mast when I walked past the construction site around 1 p.m. this afternoon. 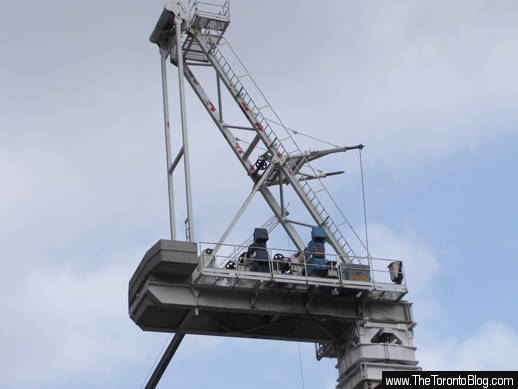 February 12 2013: The jib, the long working arm that will extend outward in front of the operator’s cab, will be installed next … 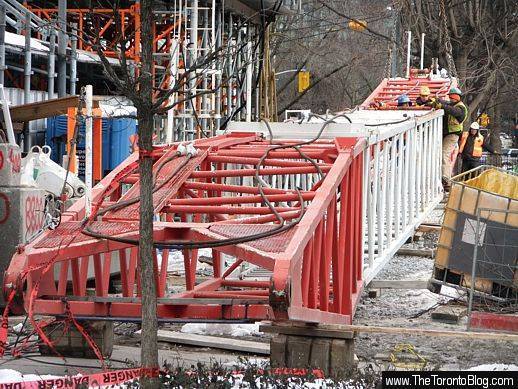 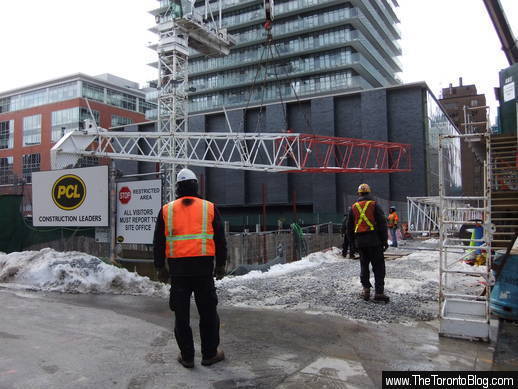 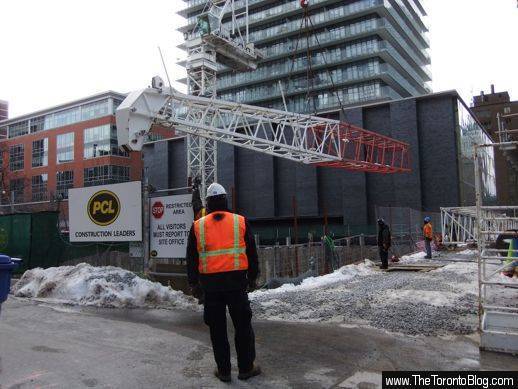 Workers wait while the portable crane lowers the jib segment 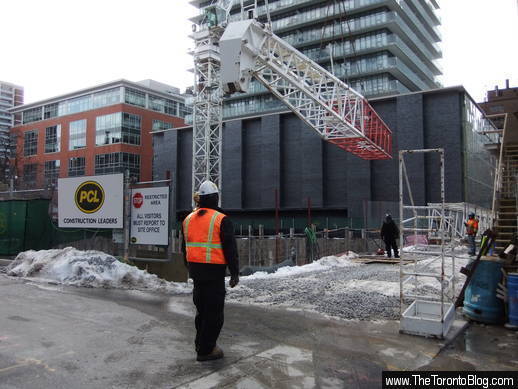 It’s a tricky process for the crane operator, who must make sure the jib segment doesn’t collide with fences and trees on the apartment building property next door 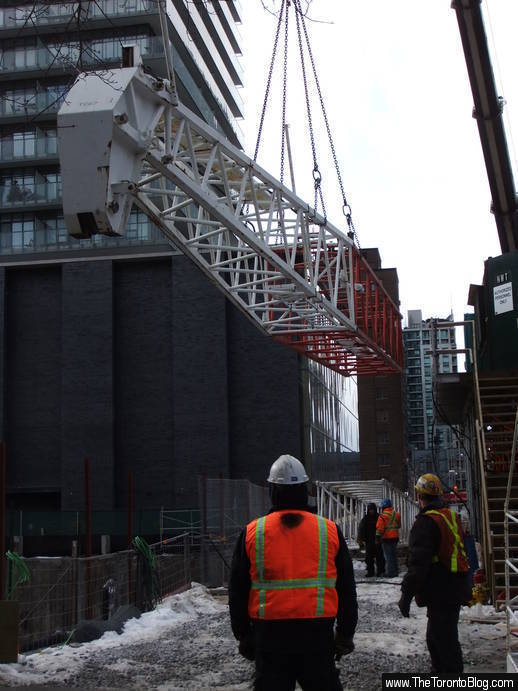 The jib section swings past some tree branches … 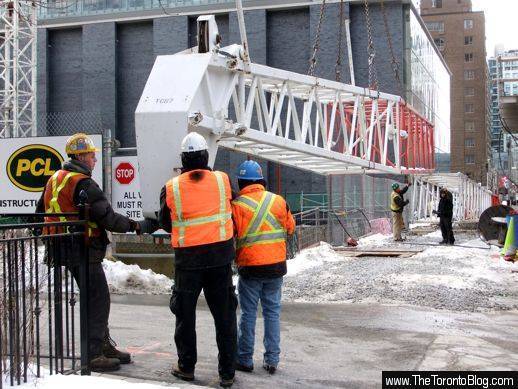 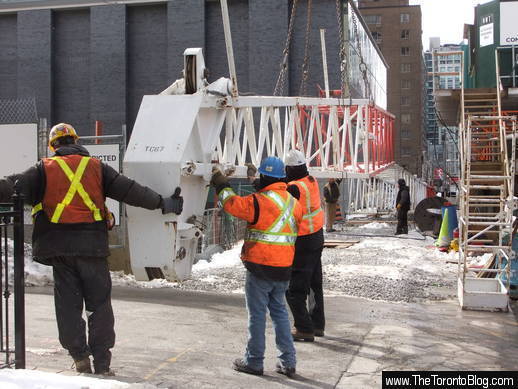 Once the jib clears the fence, the workers line it up so it can be bolted to another segment sitting on the ground 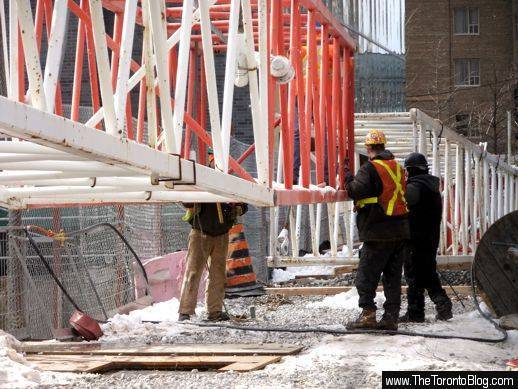 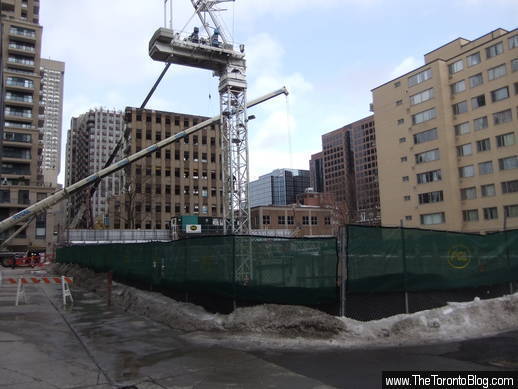 Watching the installation from the southwest corner of the ChazYorkville site 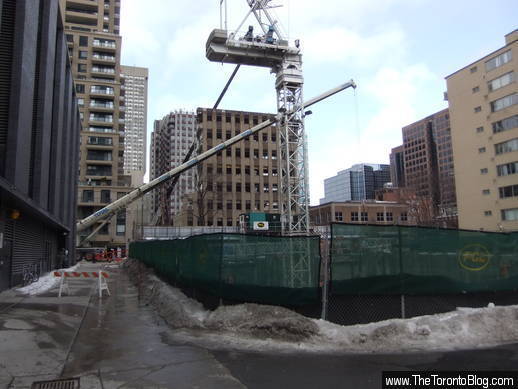 Residents of ChazYorkville will share this north-south access lane off Charles Street with their neighbours at Casa Condominium, left. 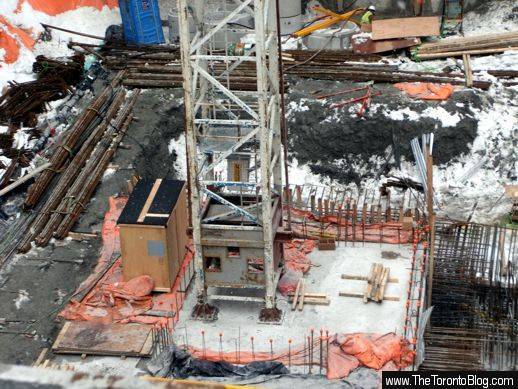 A view of the support pad for the crane mast 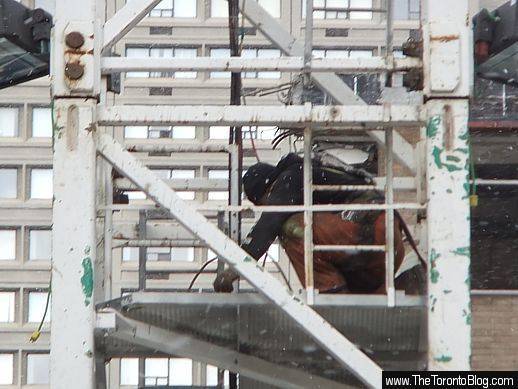 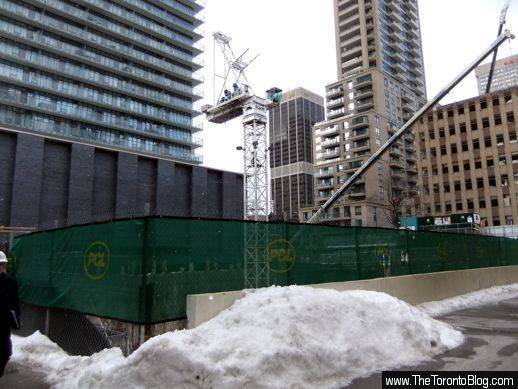 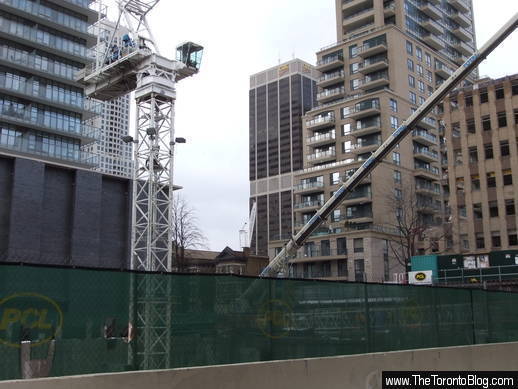 If you look closely at the middle of the photo, you can see part of a white construction crane that is helping build the 75-storey One Bloor condo tower two blocks north of ChazYorvkille at Yonge & Bloor Streets. 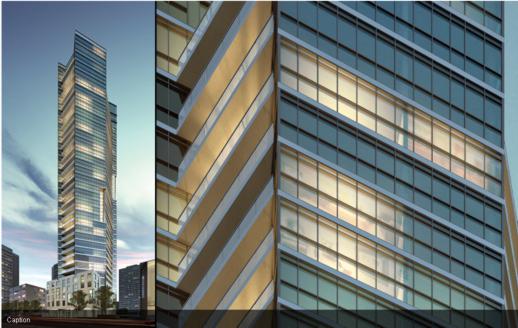 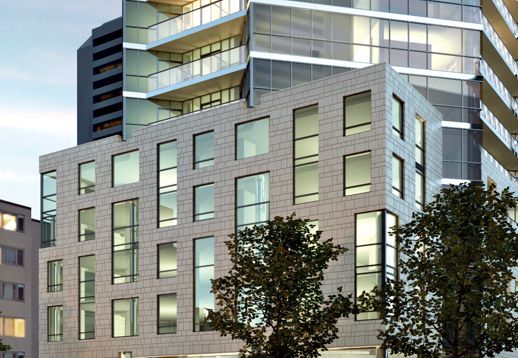 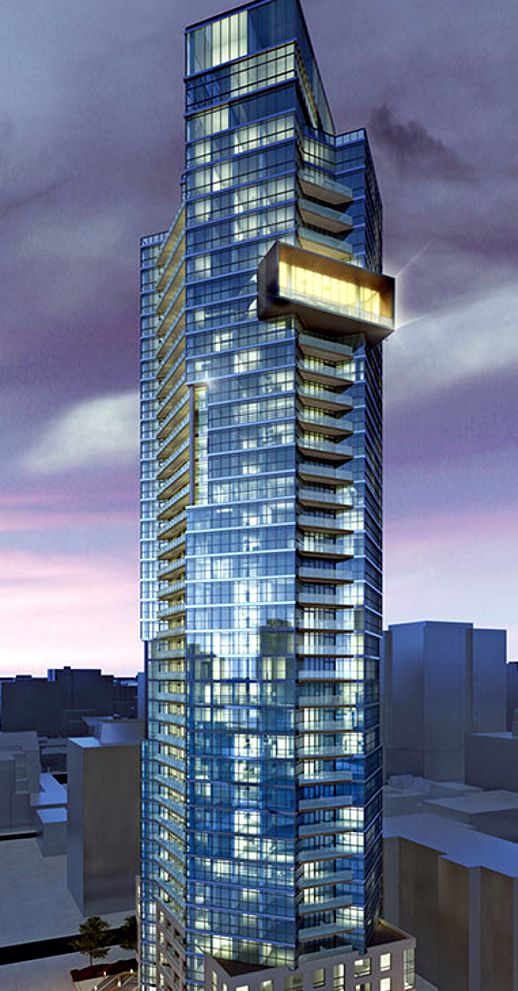 Another website illustration suggesting how the 47-storey skyscraper will look