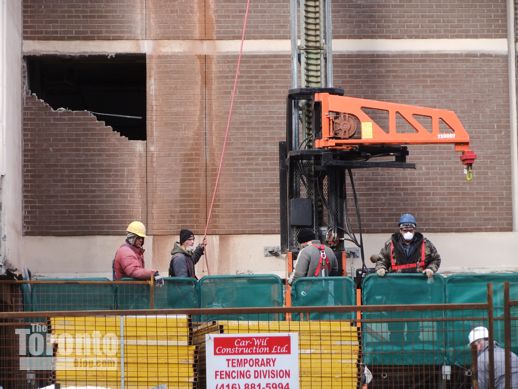 February 12 2013: A construction crew begins cutting holes where new windows and balconies  will be installed … 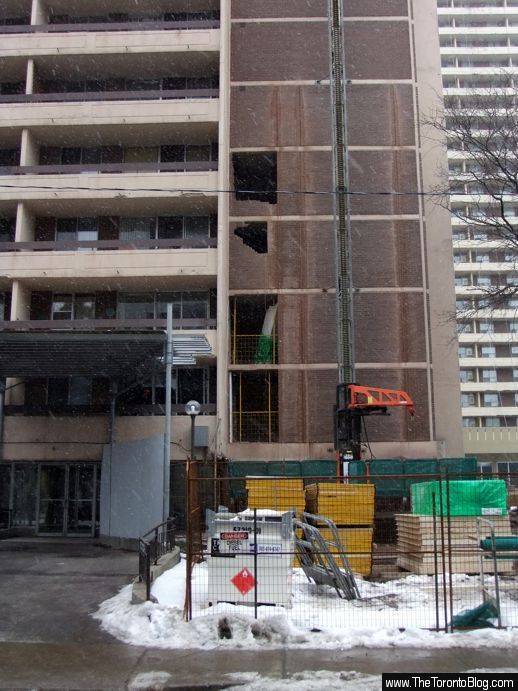 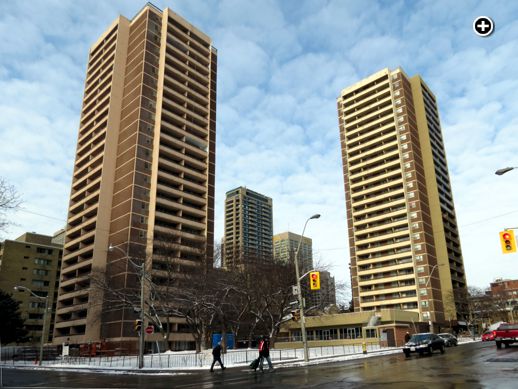 The work is just the first phase of a project in which a 23-storey addition will be built next to the rental highrise (left) in place of the trees and lawn that have provided an open space at the northwest corner of Church and Isabella Streets for more than 40 years. Meanwhile, city approval is being sought for a 3-storey walk-up condo addition to the south and west sides of the Town Inn Suites at 620 Church (right) in a separate project that would fill in the remaining greenspace on the corner property between Charles and Isabella Streets.

Apartment tower add-on: The area around Church & Isabella Streets has been buzzing — literally — with the sounds of crews preparing a 42-year-old apartment tower for construction of a highrise addition that will contain 12 condo suites and 199 new rental units.

Workers started cutting holes in the south wall of the 66 Isabella Street building this week, the first step in reconfiguring apartments on the tower’s east side before a 23-storey addition is constructed only a few feet away.

The renovation work started last month, slightly more than two years after City planners released a preliminary report outlining issues that the project posed, and recommending that a community consultation meeting be called to get public input into the redevelopment proposal. 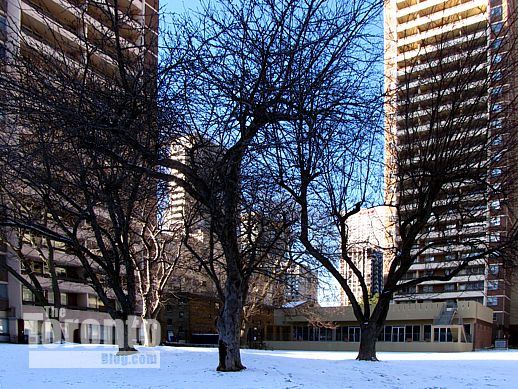 January 21 2012: These trees and the snow-covered lawn will soon disappear given that the City has approved a 23-storey addition to the 66 Isabella Street apartment building at left. The City is now being asked to approve construction of a 3-storey walk-up apartment building just a few feet north of the trees — on the site of the 1-storey podium that sits at the base of the Town Inn Suites (right). 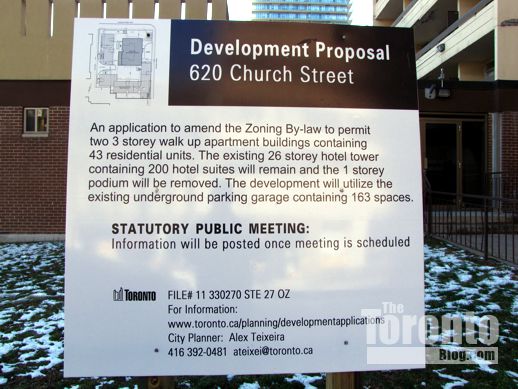 January 21 2012: This development proposal notice has been posted outside the Town Inn Suites podium next to Church Street 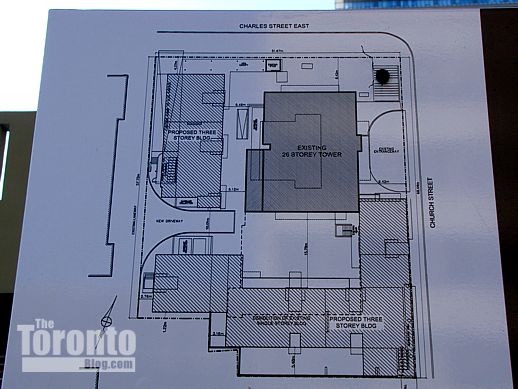 This site plan illustration shows how the proposed apartment building structures will wrap around the east, south and west sides of the Town Inn Suites property 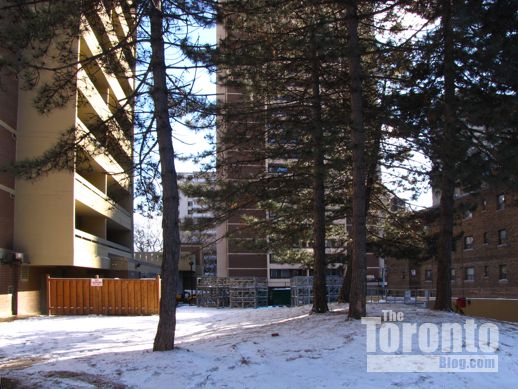 January 21 2012: These trees on the west side of the Town Inn Suites,  seen here looking south from Charles Street, will have to be destroyed to permit construction of one of the proposed walk-up apartment buildings

New infill trend?:  I’ve heard some downtown Toronto residents joke that surface parking lots should be declared an endangered species before they all get redeveloped into highrise condominium complexes. But parking lots aren’t the only pieces of prime real estate beginning to disappear from downtown streetscapes. Spacious private lawns and gardens surrounding  apartment towers built 30 to 50 years ago are also now being targetted by developers for lucrative apartment and condo infill construction projects.

On October 24 2011, Toronto City Council approved a developer’s proposal to build a 43-storey rental tower at Isabella and Sherbourne Streets, on the site of a 3-tower apartment and retail complex constructed on the western edge of the St James Town neighbourhood in the late 1970s. As I reported in an October 3 2011 post, the new tower will rise from the location of what is currently a No Frills grocery store as part of a major building overhaul that will redevelop the retail podium for the rental towers, as well as add townhouses to the east side of the complex along Bleecker Street. (The developer has not yet announced when construction will commence.)

Similar redevelopment plans are in the works just a few blocks west along Isabella, at the northwest corner of Church Street. On January 10 of this year, Toronto and East York Community Council (TEYCC) approved a developer’s proposal to construct a 23-storey addition to a 40-year-old apartment building at 66 Isabella Street. The proposal will be considered by Toronto City Council on February 6; however, Councillors are expected to rubber-stamp the plan now that it has already been given the nod by TEYCC.

In a December 13 2011 report, city planners had recommended that the addition to the east side of the existing 26-floor highrise be approved because it was an “appropriate … mixed-use development on an underutilized site and adds to the supply of purpose-built rental housing.” Many neighbourhood residents, on the other hand, were upset that the redevelopment would eliminate a stand of mature shade trees as well as a large private lawn — a treasured green space in an urban neighbourhood that City politicians and planners admit is sorely lacking in public parks. As I reported in a January 5 2012 post, many residents of 66 Isabella were angry not only because that they would lose their popular yard, but also since dozens of their neighbour tenants would be displaced during construction of the highrise addition.  Two Saturdays ago, they protested the development plan by organizing a “lawn occupation” that drew several dozen participants and attracted wide media attention (a photo and report on the event was published in the online edition of the Toronto Star on January 7).

Now, the bealeaguered residents and neighbours of 66 Isabella have yet another infill development proposal to deal with — right next door. In an application filed with the City on December 22 2011, a developer is seeking approval to build two 3-storey walk-up apartment buildings on green space surrounding the Town Inn Suites, a 26-storey hotel tower that is literally a twin to 66 Isabella, and stands only several dozen metres to its northeast. One of the rental buildings would wrap around the southeast corner of the hotel’s one-storey podium, which presently houses a swimming pool and outdoor sundeck. The second rental building would be constructed on the west side of the Town Inn Suites, currently the location of a tree-shaded side yard as well as the entrance/exit ramp to the hotel’s underground parking garage. The two apartment buildings would contain a total of 43 units.

During conversations with a number of neighbourhood residents in recent days, people have told me they fear that the infill projects at Church & Isabella, along with the redevelopment proposal for Isabella & Sherbourne, could have a domino effect, encouraging more apartment building owners to seek to replace ground space on their properties with low- and high-rise additions. Lush gardens and tree-shaded lawns that presently beautify dozens of downtown rental buildings would be at risk if more property owners sense the potential for increased rental income and profits, and jump on the redevelopment bandwagon. “In just a few years, it might be rare to see trees and gardens downtown,” one worried neighbour told me. ” We could lose most of our greenery to look-a-like glass towers and building additions that extend right to the edge of the property line,” she said ruefully.

Below is a series of photos I shot this afternoon, showing the Town Inn Suites property that is proposed for redevelopment into low-rise apartments. 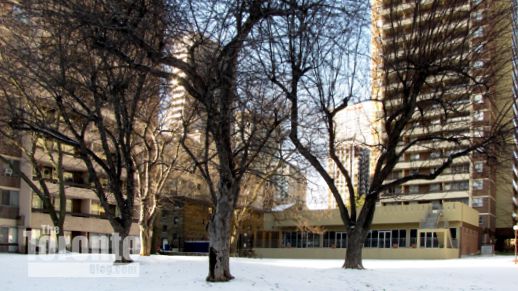 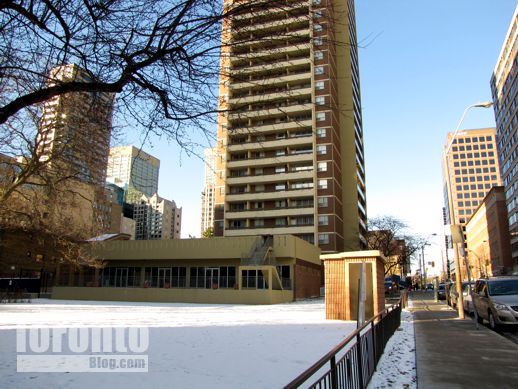 Looking toward the Town Inn Suites from the northwest corner of Church & Isabella Streets. The yard space and the 1-storey podium for the hotel are both slated for redevelopment into separate apartment housing projects. 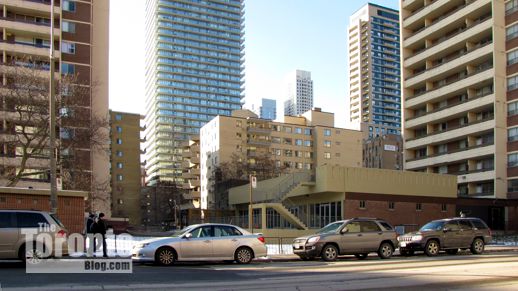 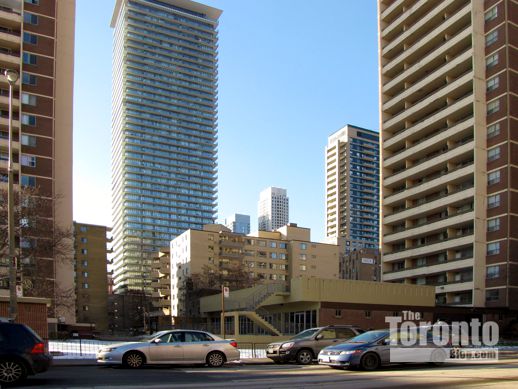 The 46-storey Casa condominium tower soars skyward just half a block west of the proposed apartment development site, in this view from Church Street. Another condo skyscraper, Chaz.Yorkville, is currently under construction right next door to Casa, and will block much of this view of Casa once it is built. The City approved 39 storeys for Chaz.Yorkville; however, its developer subsequently sought zoning changes that would permit it to build 47 floors. It has since appealed to the Ontario Municipal Board because the city didn’t reach a decision on its request within the timeframe prescribed by provincial planning law. 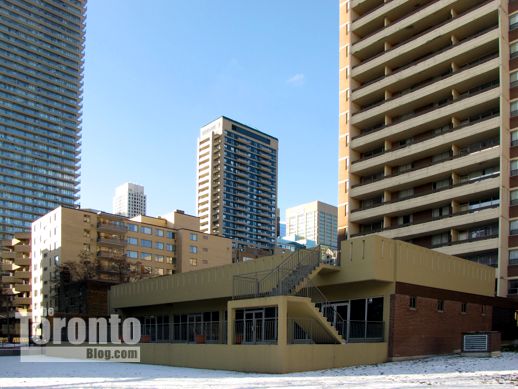 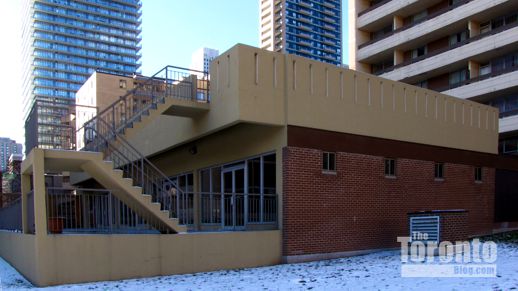 A street-level view of the podium, from its southeast corner 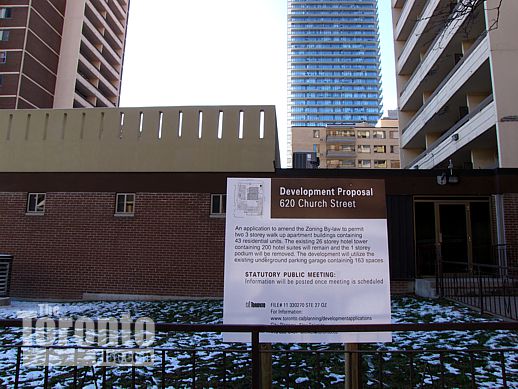 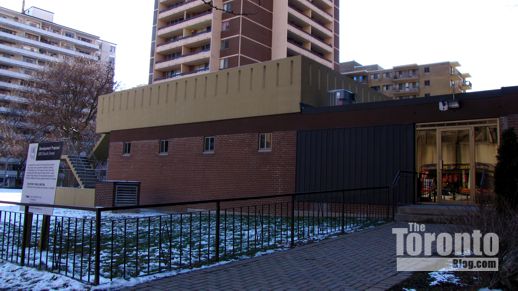 A view of the podium, looking southwest along the Church Street sidewalk. The apartment building at 66 Isabella Street rises in the background. 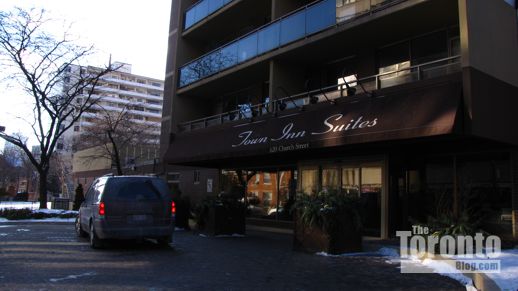 The Town Inn Suites main entrance at 620 Church Street. The hotel, which has 200 suites, will remain as part of the proposed new development. 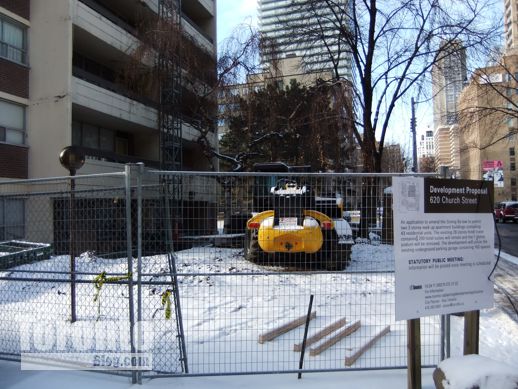 The north side of the Town Inn Suites, looking west from the corner of Church and Charles Streets. Repairs to the building exterior are underway. 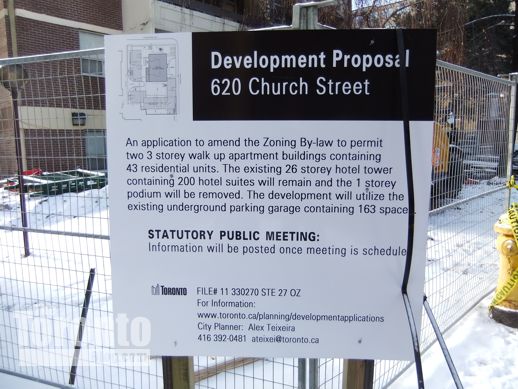 A development proposal sign at the southwest corner of Church & Charles 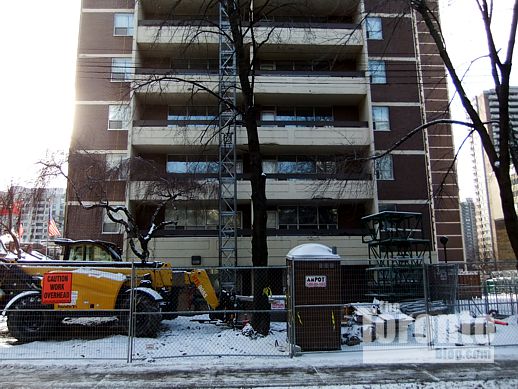 The north side of the Town Inn Suites along Charles Street. A city planner last summer said that the developer initially had been planning to build a row of townhouses along this side of the property. Now, two apartment buildings are being proposed on the south and west sides of the hotel instead. 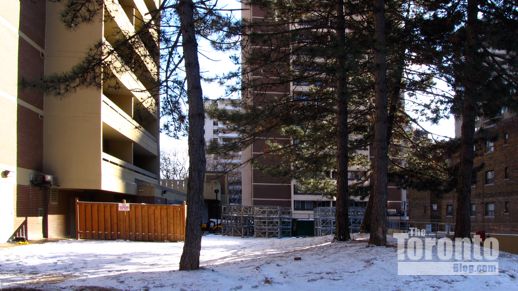 This yard on the west side of the hotel is the proposed site for one of the new apartment buildings. That’s 66 Isabella  in the background. 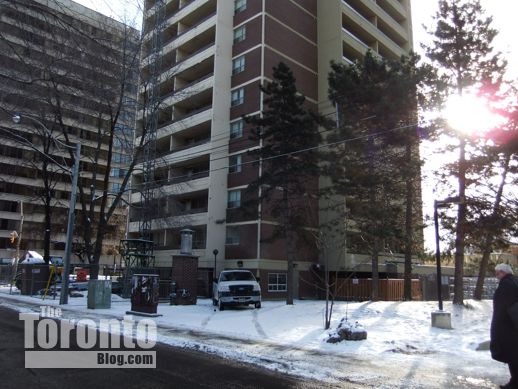 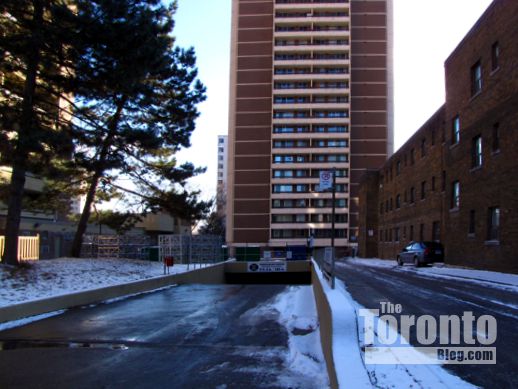 This ramp leads from Charles Street into the hotel’s underground parking garage. The ramp would be relocated and accessed from the laneway to the right once the new low-rise apartment building is constructed. 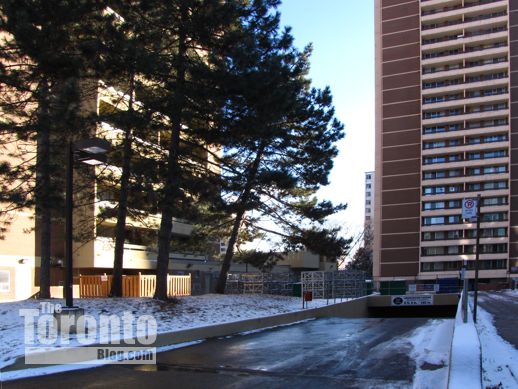 The underground garage has parking for 163 vehicles 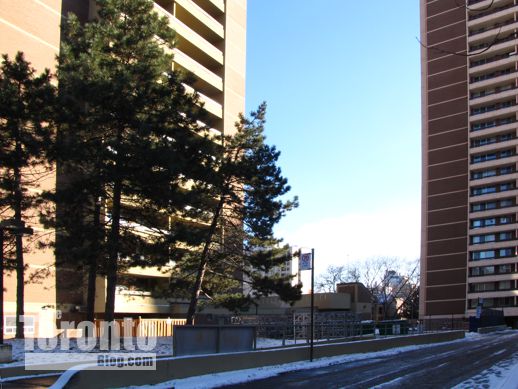 The addition to 66 Isabella will block this view of the sky from Charles Street, while the proposed 3-storey apartment building will dominate the foreground