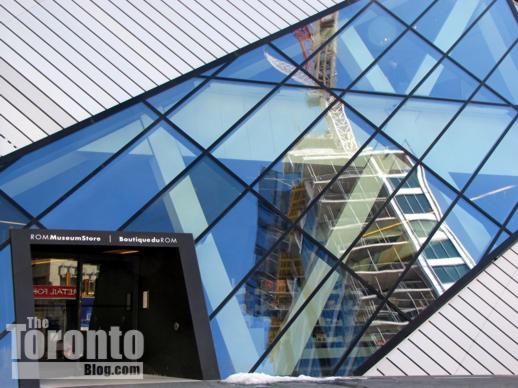 Mirror image: Windows in the Royal Ontario Museum’s Michael Lee-Chin Crystal (above) reflect an image of the Museum House on Bloor condo tower under construction across Bloor Street. Below is a view of the Museum House condos building from Philosopher’s Walk to its south, on the University of Toronto campus. Both photos were taken on April 1, 2011. 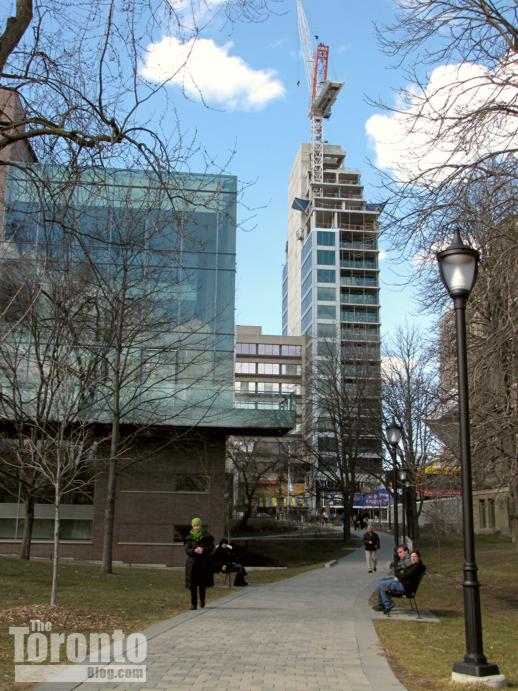 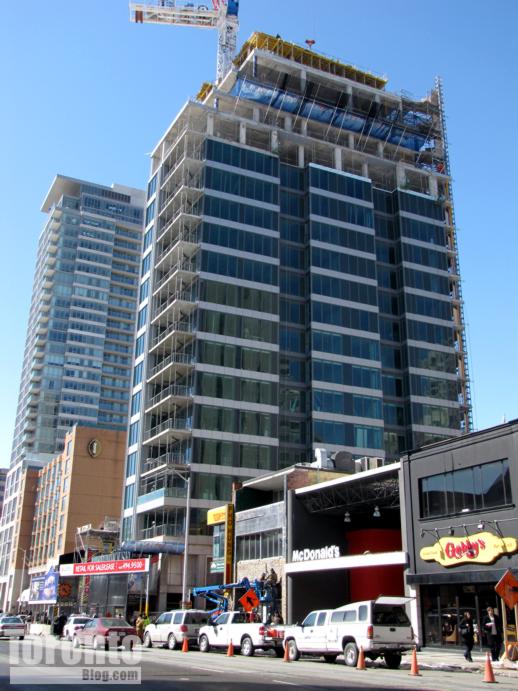 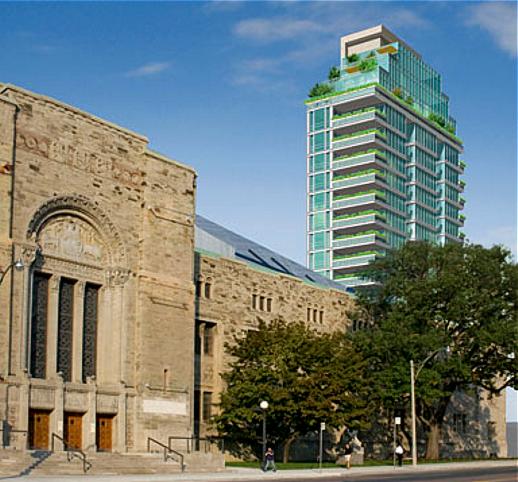 Puttin’ up the penthouse: Museum House on Bloor is getting its crowning jewel — a sprawling two-storey, 5,618-square-foot penthouse with an 1,152-square-foot terrace.  The posh pad, now under construction, will occupy the 18th and 19th floors of the slender midrise condo  building that has been rising on the north side of Bloor Street just west of Avenue Road.  While I was watching workers assemble forms to prepare for a concrete pour on the penthouse levels this afternoon (from the street, unfortunately; I doubt they’d allow me onto the construction site), a line from the “Green Acres” TV show theme song kept repeating in my mind. I know that Eva Gabor was referring to New York City when she sang, “I just adore a penthouse view,” but I’m sure she would have enjoyed the skyline and scenery from the top of Museum House almost as much. Its expansive — and highly expensive — penthouse suite will overlook The Royal Ontario Museum and the Royal Conservatory of Music on Bloor Street, as well as tree-shaded Philosopher’s Walk, the University of Toronto campus, Queen’s Park and the provincial Legislature buildings. Views extend to the Financial District and CN Tower in the south.  But while its occupants will no doubt savour the panoramic sightlines from their glittering glass box in the sky, they might not get to enjoy it privately once the 32-storey Exhibit Residences condo tower is constructed next door. And I’m sure there will be plenty of curious people living at Exhibit who will enjoy their prime views into the Museum House penthouse just as much as the downtown skyline.  Below are pics I snapped of Museum House this afternoon. Additional photos can be viewed on my January 9 2011 post about Museum House. 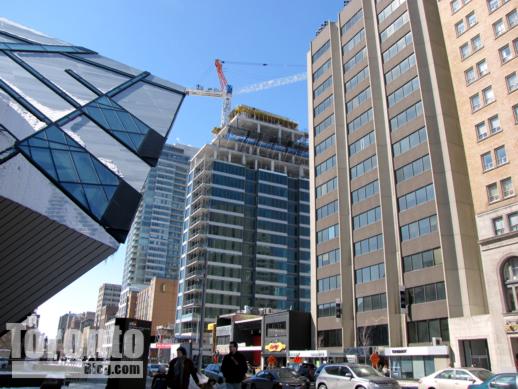 Museum House on Bloor condo construction viewed from the southwest corner of Avenue Road and Bloor Street on March 24 2011. At left is the Daniel Libeskind-designed Michael Lee-Chin Crystal of the Royal Ontario Museum 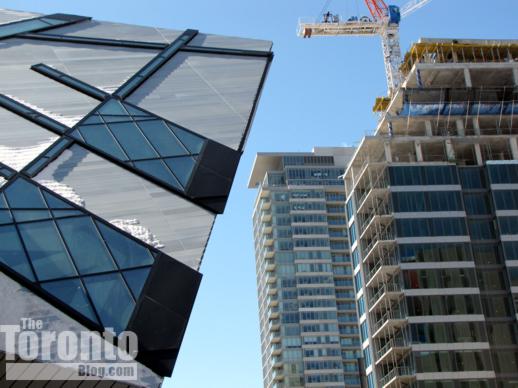 The Michael Lee-Chin Crystal of the Royal Ontario Museum, left, the One Bedford condominium tower at Bloor Street and Bedford Road, center, and Museum House 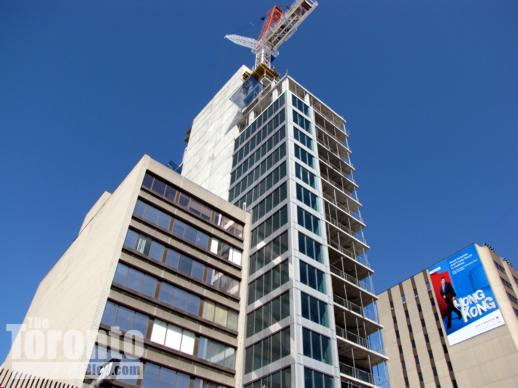 Southwest view of Museum House from the Bloor Street sidewalk outside the Royal Conservatory of Music. When the Exhibit Residences condo tower is built, it will soar 32 storeys on the east (right) side of Museum House 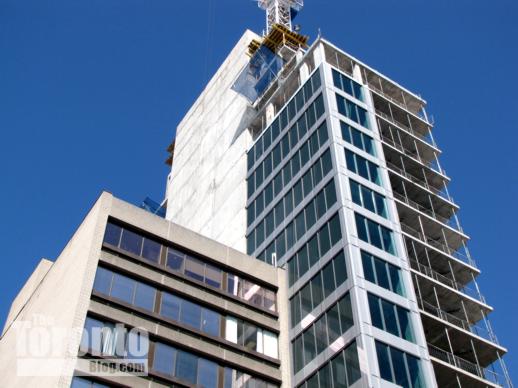 Southwest view of Museum House from Bloor Street. I haven’t seen any renderings that show how the solid concrete west wall will be clad 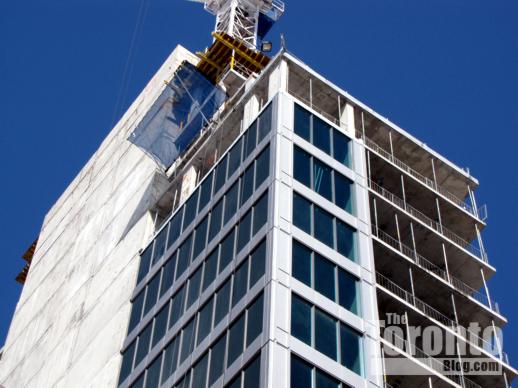 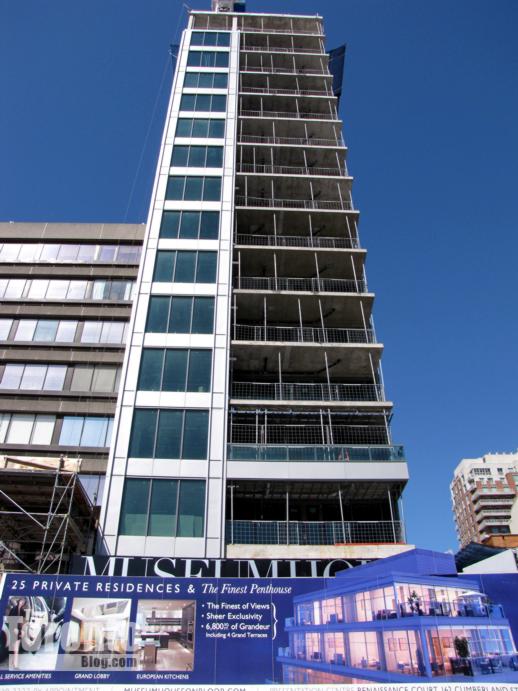 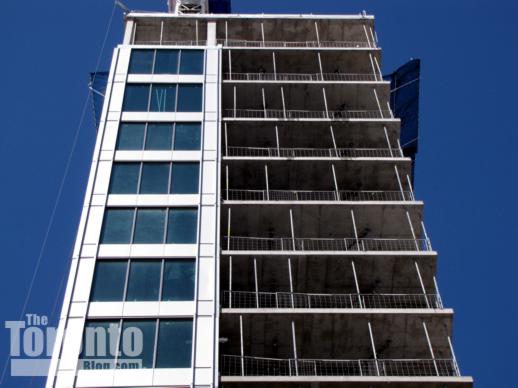 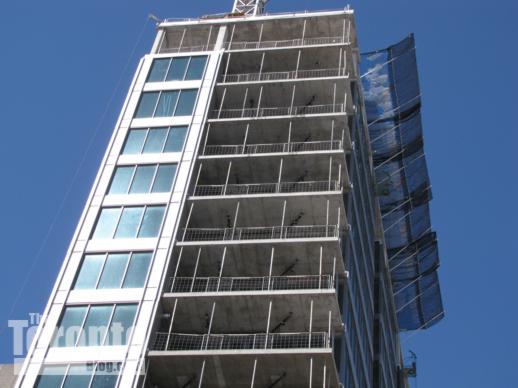 Southeast view of the upper floors of Museum House 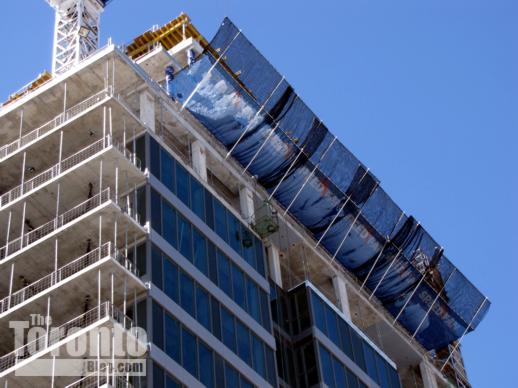 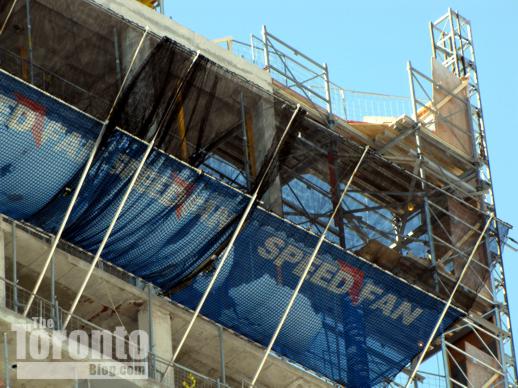 Safety nets along the east side of the penthouse levels 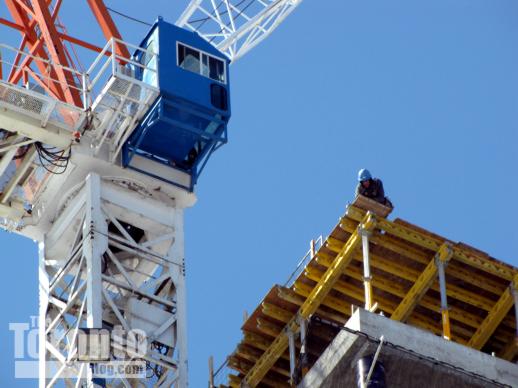 A construction worker in a perilous position high above Bloor Street 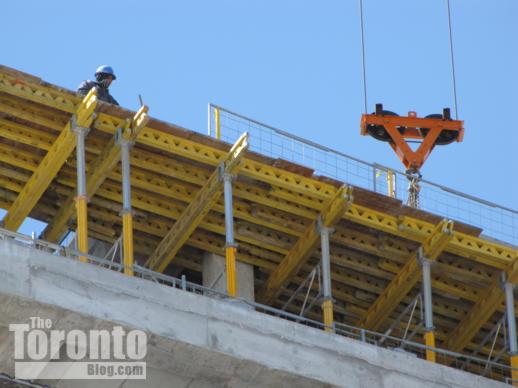 Getting forms in place to prepare for more concrete pouring 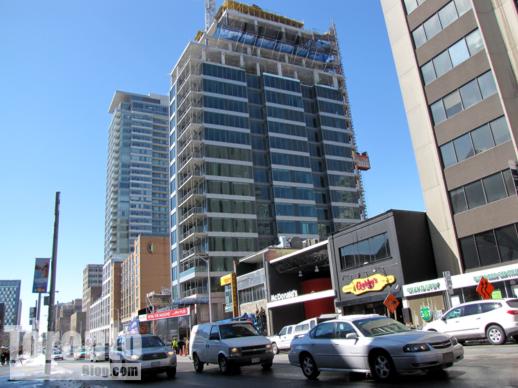 Westerly view of Museum House from the sidewalk in front of the Royal Ontario Museum. The Exhibit Residences tower ultimately will rise where on the site of the two-storey commercial buildings next to Museum House. 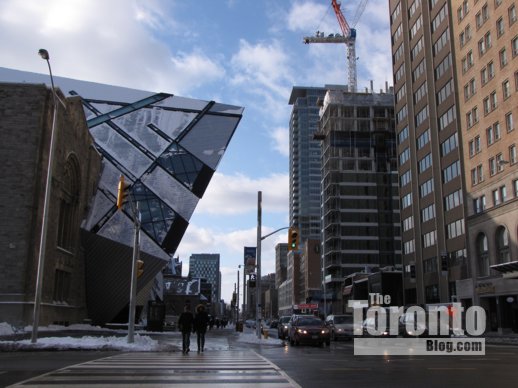 The Royal Ontario Museum’s Michael Lee-Chin Crystal appears to point at the Museum House condo under construction across Bloor St.

Nearly there: With only three storeys left to build, and windows already installed on more than half its floors, Museum House on Bloor is drawing some attention away from its famous namesake across Bloor Street — the Royal Ontario Museum (ROM). The slender luxury condo tower will top off soon at its full 19-storey height, offering a mere 26 “discerning residences” to its very well-heeled buyers (fully detailed descriptions of the building and its suites are provided on the Museum House website.) Below are some fresh Museum House construction pics I shot this afternoon, along with a slideshow of other photos taken since 2008. I hope Museum House enjoys its moments in the limelight, while they last, because a much taller condo project is waiting in the wings to steal its thunder. Right next door is the site for the proposed Exhibit Residences condo tower, which is currently accepting registrations from interested potential purchasers. Sales for that project haven’t been launched yet, but its website does give some sneak peeks at the dramatic design being considered for Exhibit, as you’ll see in the three images at the bottom of this post. 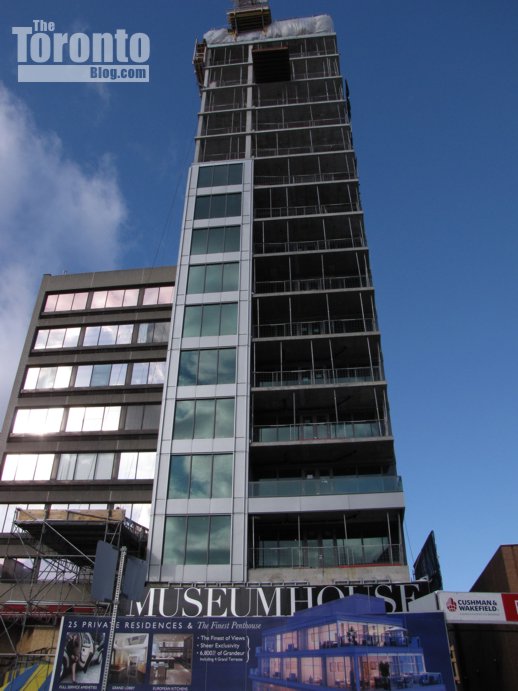 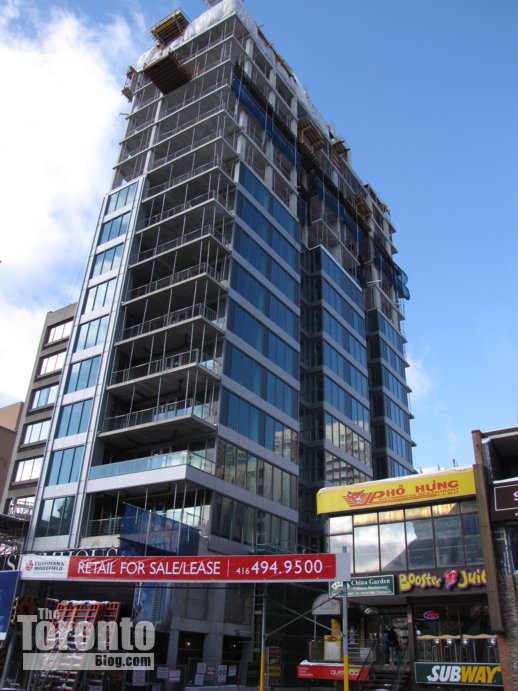 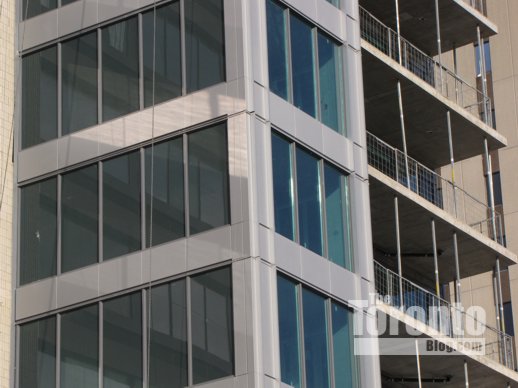 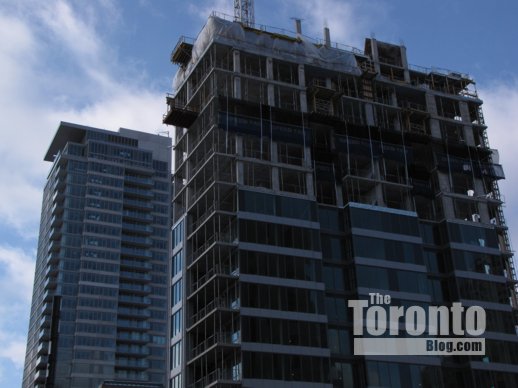 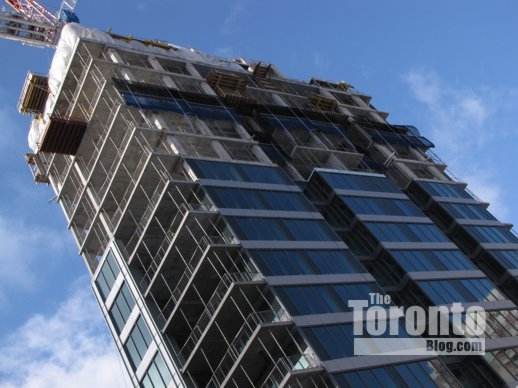 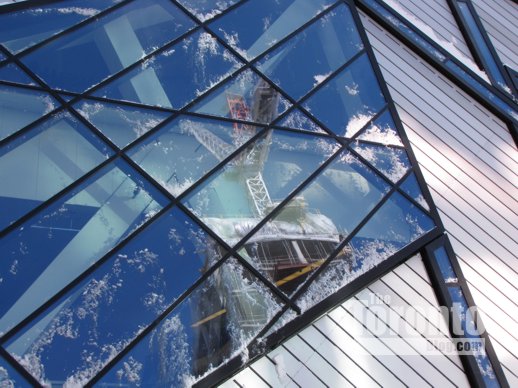 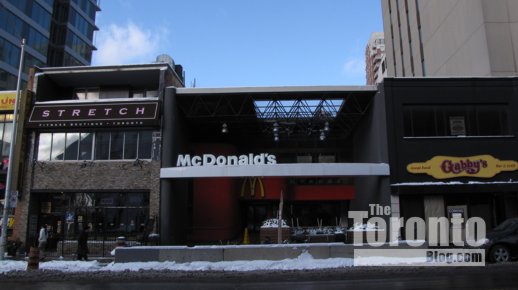 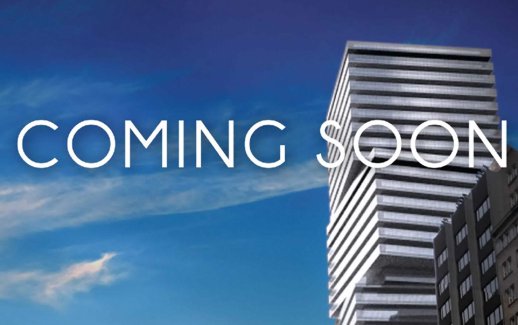 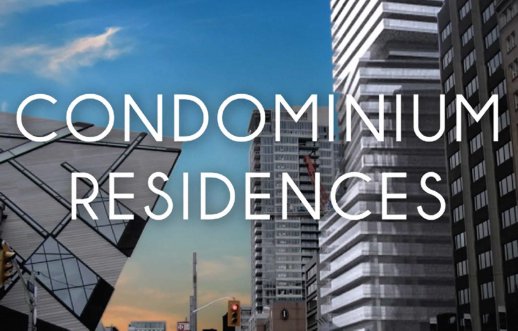 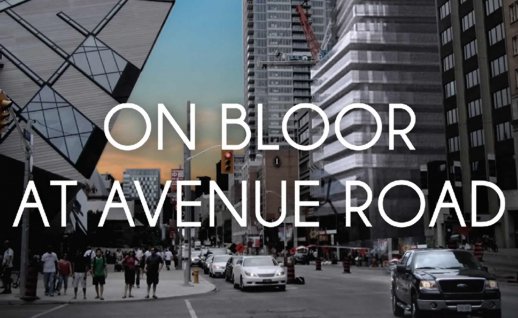