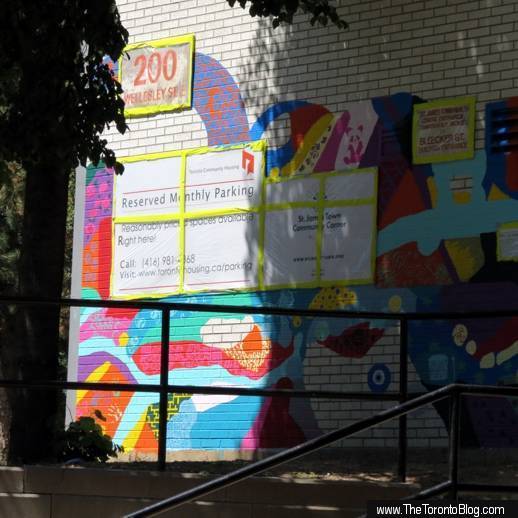 August 9 2013: Mural work at the base of 200 Wellesley. The mural will depict a phoenix hatching from an egg at this corner of the building, and then soaring upwards to the top of the tower.

A team of volunteers began painting the mural at the end of July, and expect to finish the work in early September. A project of Sustainable Thinking and Expression on Public Space (STEPS) Initiative and the St James Town Community Corner, the mural is a collaborative effort by 40 youths from the St James Town area as well as eight professional artists. STEPS is an organization that promotes the use of art “to connect people with public spaces.” The goal of its mural initiative is to revitalize the neighbourhood and create a community landmark at 200 Wellesley.

“The building, which possesses a complicated history, is located near a busy intersection, with high multi-modal traffic, including pedestrians, cyclists and motorists. While visible from around the downtown core – a rare occurrence for downtown properties – the building is currently unmemorable and often difficult for residents and visitors to find. The mural seeks to turn the building into a celebrated local landmark,” a STEPS press release explains.

The media announcement adds that the “phoenix rising” theme is aimed at countering “the negative stereotypes associated with St. James Town.”

Funding for the $24,000 project came from a StreetARToronto grant and independent donations.

The press statement quotes Ward 28 City Councillor Pam McConnell as saying that the mural “will elevate the neighbourhood in a very exciting way, both bringing sparkle and splendour as well as providing the St. James Town youth a new source of pride.”

However, many people who live in 200 Wellesley don’t share the same sentiments as their local councillor.

The Toronto Sun reported on August 2 that more than 300 residents had signed a petition calling for work on the mural to be halted immediately. According to the Sun, the residents object because they “weren’t consulted by the artists, [they] fear the piece could make them a visible landmark for drug dealers and many want the cash used [for] repairs inside the building.”

In a piece published August 9 2013, Toronto Star columnist Joe Fiorito sided with the petitioners, calling for work on the controversial mural to be stopped because numerous building residents, including elected tenant representatives, claim they were not properly consulted about the project beforehand and say they don’t even want the artwork on the exterior wall. Noting that 200 Wellesley is an apartment building, Fiorito said: “And I remind you again that it is a house. It is not a symbol. It is a place of residence. Real people live there.”

The mural painting has proceeded despite the protests. Lead artist Sean Martindale has told local media that residents were in fact consulted about the mural plan and indicated their support for the artwork by an overwhelming majority. ““Basically, we’ve been having to spend a lot of time dispelling rumours. We’re trying to give something to the community but (the project) has been painted with lies,” the Sun quotes Martindale as saying.

I personally love what I see of the mural so far, and consider it a tremendous improvement to both the building in particular and to St James Town in general. It adds a cheery and refreshing pop of colour to a skyline crowded with drab white and grey towers, and also enhances the streetscape along Wellesley. It’s a terrific addition to the St James Town landscape and should give city residents a new and positive impression of the often-maligned neighbourhood.

Below are more photos of painting progress on the phoenix mural, followed by a link to the album entitled 200 Wellesley’s phoenix mural on TheTorontoBlog’s Flickr page. The album contains full-size versions of the photos in this report, as well as numerous vertical photographs not shown here.

A brief Global News Toronto videoclip about the mural project can be viewed by clicking here.

August 9 2013: Ground-level work on the mural, viewed from the south side of Wellesley Street East 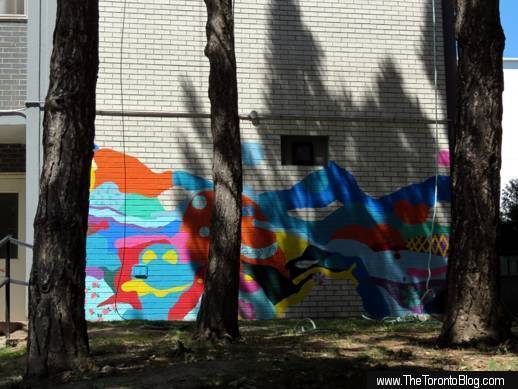 August 9 2013: Painting progress at the bottom of the tower’s southeast side 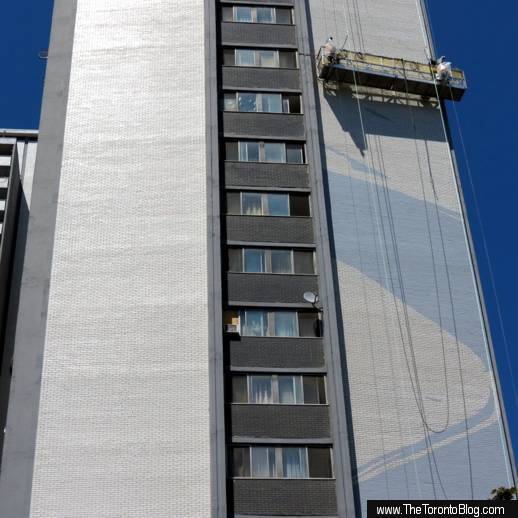 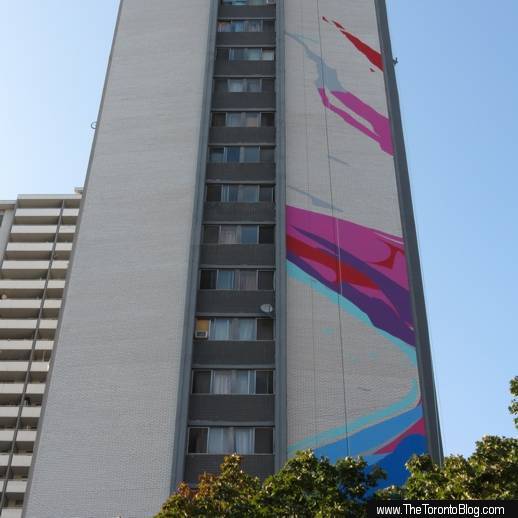 August 16 2013: More colours have been added to the right side of the wall 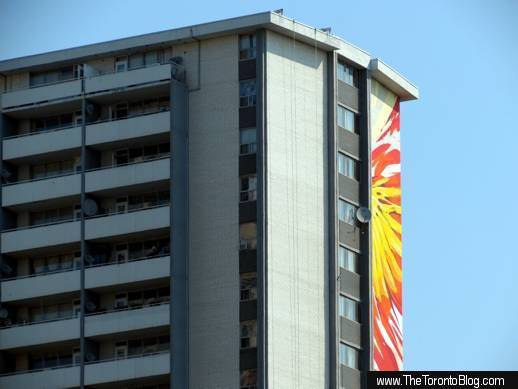 August 20 2013: The phoenix’s orange and yellow feathers near the top of the tower will be eye-catching even from a considerable distance 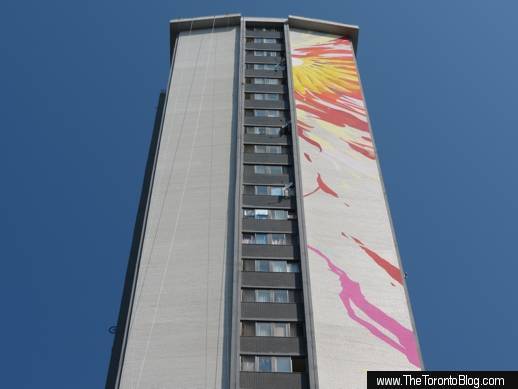 August 20 2013: Mural progress viewed from the south side of Wellesley Street 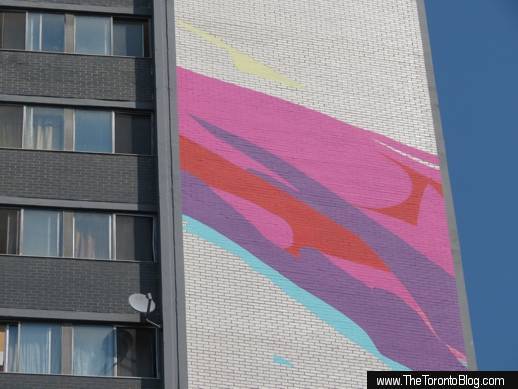 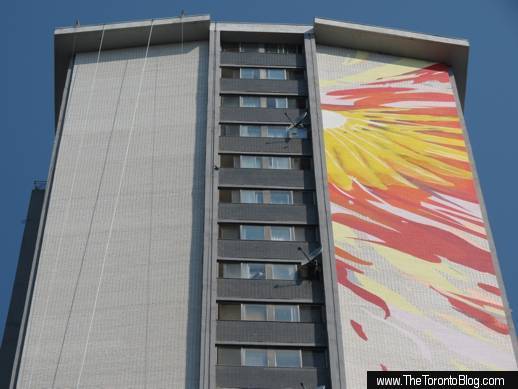 August 20 2013: The phoenix’s colourful wings continue to take shape near the top right corner of the tower’s south wall 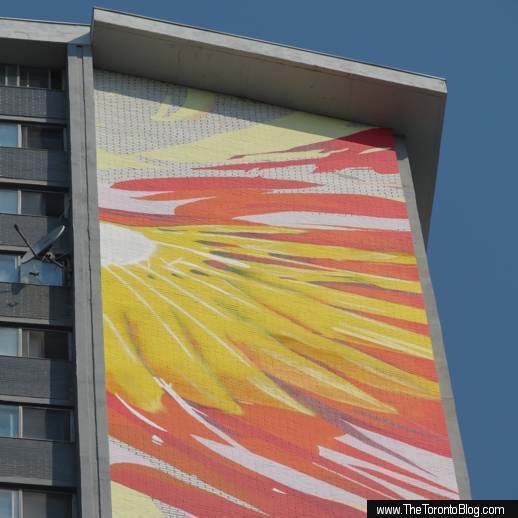 August 20 2013: A closer view of the phoenix’s orange and yellow feathers 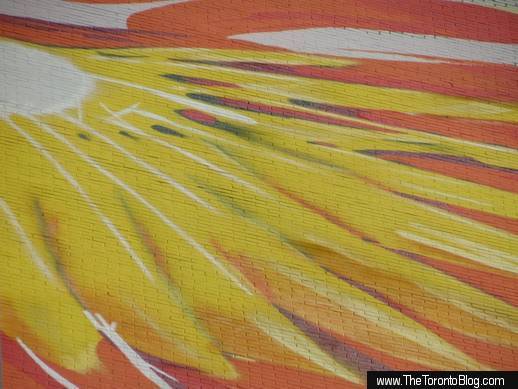 August 20 2013: A telephoto view of the colour detail on the brickwork 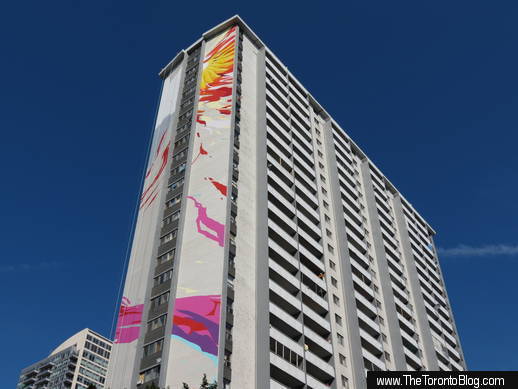 August 24 2013: The painters have made progress on the left side of the wall 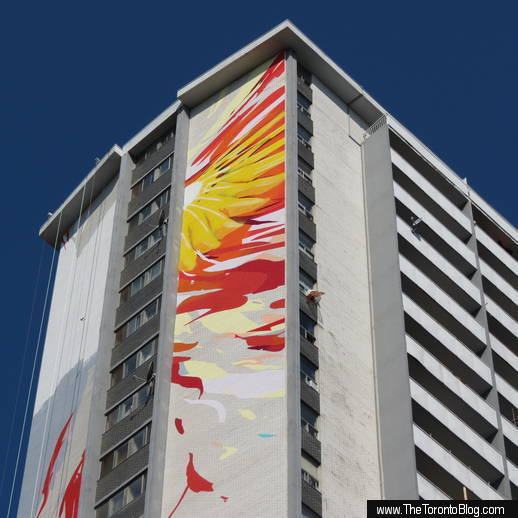 August 24 2013: The top of the mural is looking more complete 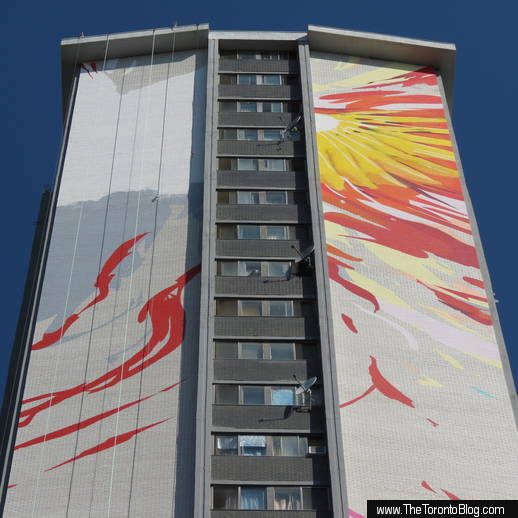 August 24 2013: Another view of painting progress on the upper wall 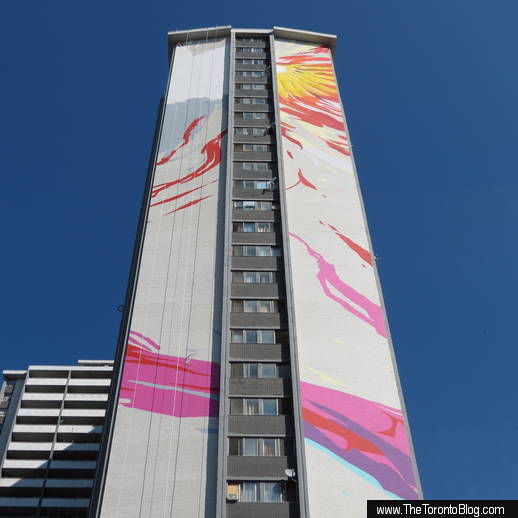 August 24 2013: A view of progress on the upper two-thirds of the tower 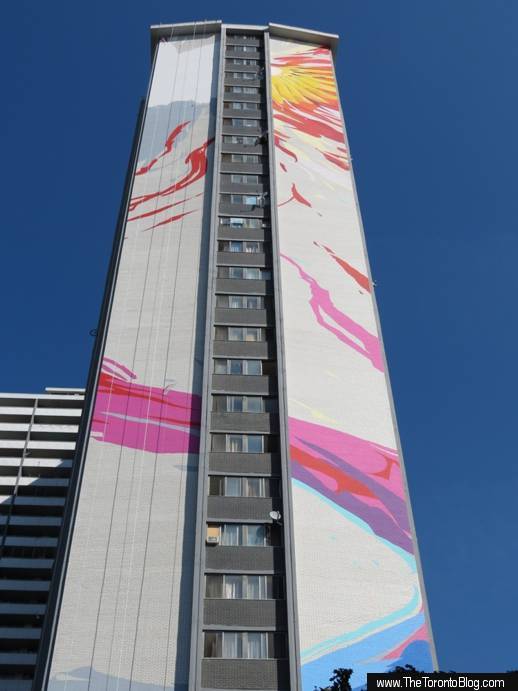 Above is a link to the album entitled 200 Wellesley’s phoenix mural, from TheTorontoBlog’s Flickr page. Click twice on the image to open the album and view full-size versions of the pictures posted above, as well as vertical images that are not included in the blog post.