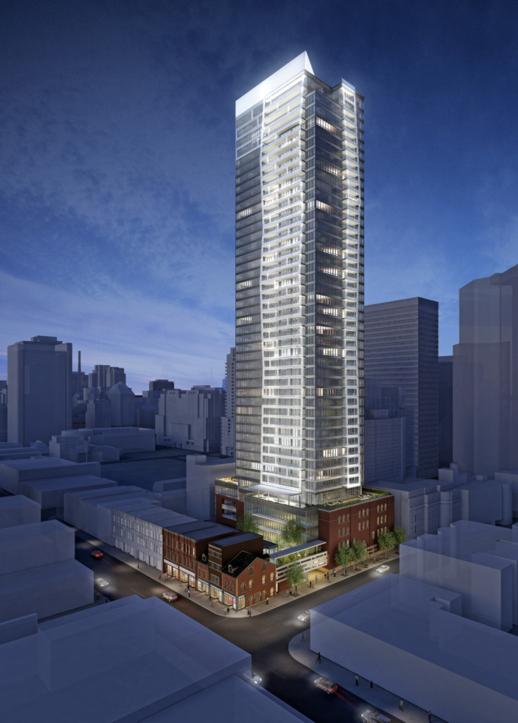 While I was snapping a photo of FIVE from Dundonald Street this week, a resident told me she knew the condo tower was going to be tall, but never realized just how big an impact it would have on the neighbourhood until the construction climbed into view. Now that she can tell how wide the tower will be, and see how it will eventually block views of highrises to its west (including the former Sutton Place Hotel on Bay Street), she has a better grasp of the project’s height and density. She said she shudders at the thought of the shadows FIVE will cast across the area in late afternoon, particularly on the linear city parks to the east of Yonge between Dundonald and Isabella Street.

FIVE Condos is a project of Graywood Developments Ltd., Mod Developments Inc., Tricon and Diamond Corp. The project was designed by Hariri Pontarini Architects, while restoration of the heritage buildings on the site is being overseen by E.R.A. Architects Inc. 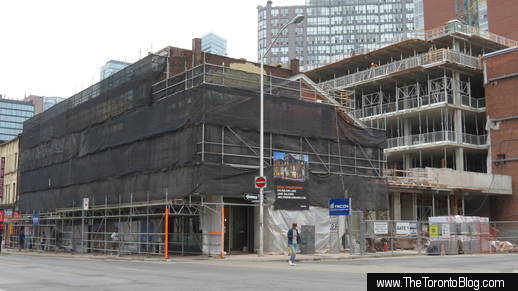 August 30 2013: Scaffolding surrounds the heritage buildings at 606 to 618 Yonge Street behind which the 48-storey tower is under construction 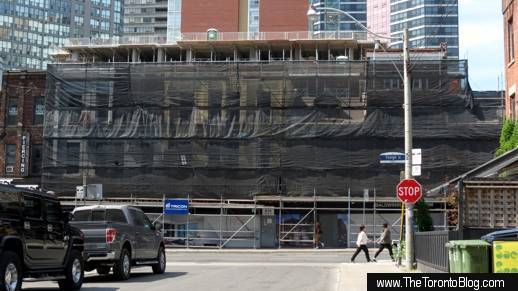 August 25 2013: A Dundonald Street view of the heritage buildings and the tower construction rising to their immediate west 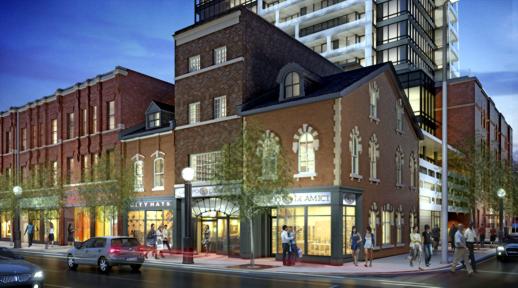 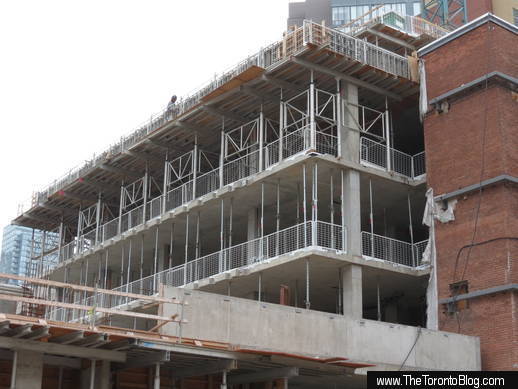 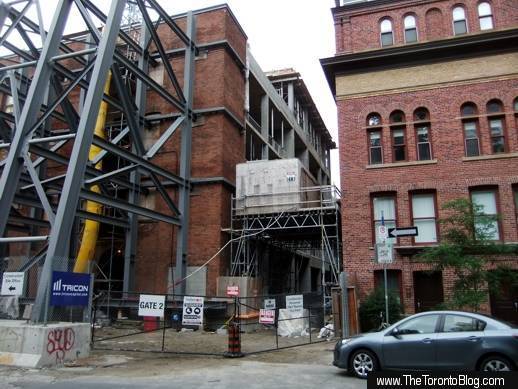 August 31 2013: Looking south at progress along St Nicholas Street, behind the retained facade of the former Rawlinson Cartage warehouse. The lane between the FIVE site and 11 St Joseph (right) is closed to traffic during construction. 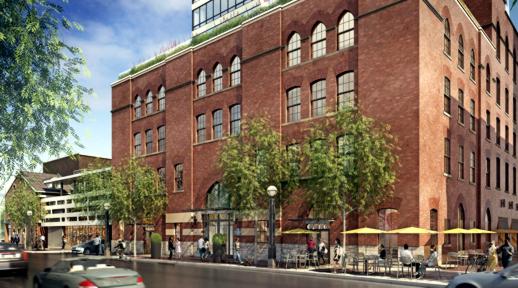 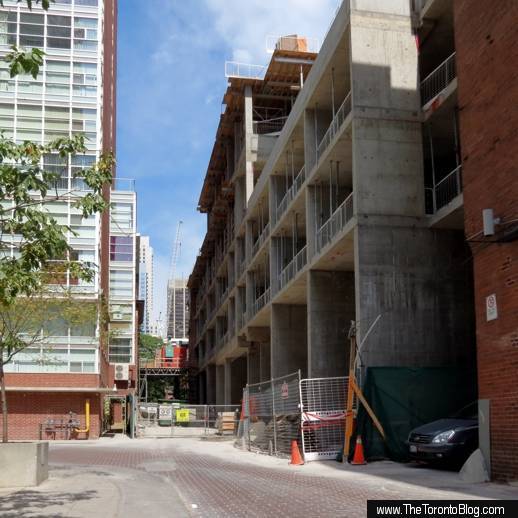 August 25 2013: The west side of the FIVE Condos complex, as seen from St Nicholas Street. At left is the south side of the Eleven Residences condo building at 11 St Joseph Street. 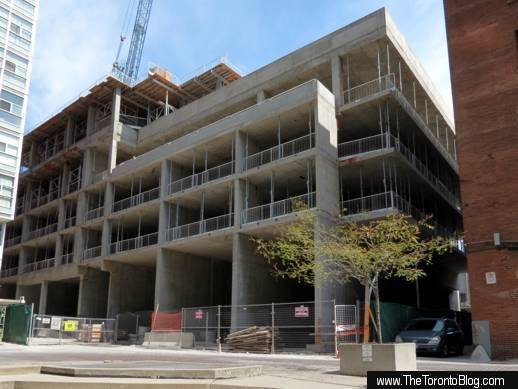 August 25 2013: Construction progress viewed from the corner of Phipps Street and St Nicholas Street. The warehouse buildings that formerly occupied the site were demolished, but their brick facades will be rebuilt to resemble the originals. 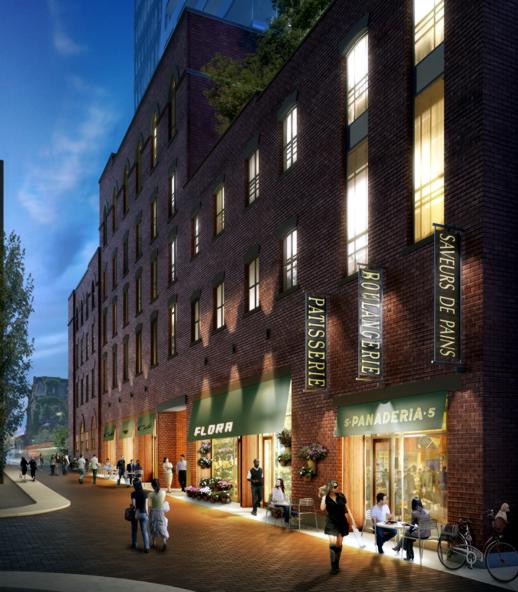 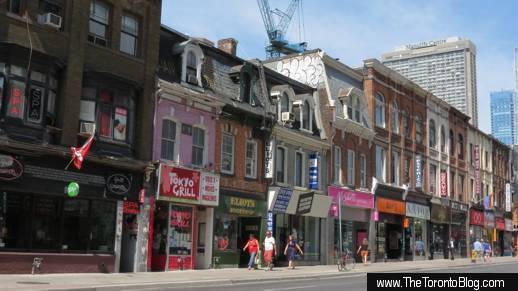 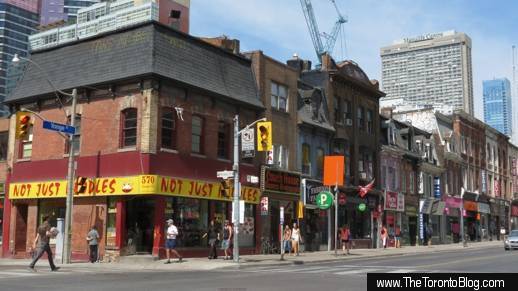 August 25 2013: Looking toward the FIVE Condos crane from the southeast corner of Yonge & Wellesley Streets. The condo tower construction should become visible from this point in just several weeks’ time. 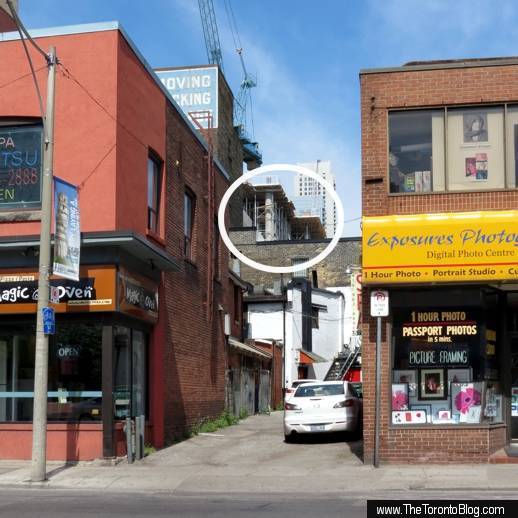 August 25 2013: FIVE’s tower construction has begun coming into view from one block south on Wellesley Street, just a few steps west of Yonge.

Above is the FIVE Condos album from TheTorontoBlog’s Flickr page. It contains nearly 100 photos of FIVE’s construction since September 2012. Click once on the image to view a slideshow, or click twice to view individual full-size images.