But for most of this year, Ten York wasn’t on the tip of many tongues. Instead, announcements about other development projects proposing even taller towers captured most of the public’s attention. First came the rezoning application in late March for an 83-storey condo skyscraper, with an 8-storey office and retail podium, on the 50 Bloor Street West site of the Holt Renfrew Centre. Second was the October 1 announcement by Toronto theatre impressario David Mirvish and architect Frank Gehry of plans to build an art gallery and three “distinct and striking” condo towers, each more than 80 storeys tall, on the King Street West site of the Princess of Wales Theatre and adjacent properties. And third was the October 12 Oxford Properties Group announcement of plans for an enormous $3-billion redevelopment on Front Street West that would include a casino, convention centre, retail and office space, and condo towers.

Previews putting redesigned Ten York tower back in the limelight

Although the other big projects have been basking in the media spotlight, Ten York has quietly worked its way back to the forefront. Last month, the Tridel development group rolled out a major “coming soon” marketing campaign to launch “previews” for the Ten York project, which has been revised from original plans and been given a striking new shape and look by its designers, Toronto’s Wallman Architects.  Newspaper and magazine ads feature eye-catching artistic renderings of what I consider a beautifully re-designed building, along with amazingly realistic aerial illustrations showing how the Ten York tower will appear on the city skyline. Although it won’t be quite as tall as the tower unveiled to so much fanfare last November, it looks clear to me that the flatiron-shaped Ten York will nevertheless become a distinctive landmark on the skyline. Its stunning podium should make an equally strong visual impact at ground level as well.

And unlike the other tower mega-projects announced over the course of the past 10 months, Ten York is a significant step closer to becoming a reality. The Ten York development application is on the agenda for the November 6 meeting of Toronto and East York Community Council (TEYCC), and city planners have recommended approval in principle be given to zoning and bylaw changes that would permit the project to proceed. Depending upon what the TEYCC decides tomorrow, the Ten York proposal could go to the full Toronto City Council for approval as early as November 27.

TEYCC will be reviewing an October 19 2012 final report in which city planners recommend approval be given for a 224-meter, 62-storey tower with 4-storey podium and 726 dwelling units — provided that adequate parking be provided, along with an “affordable housing contribution to the value of $5.2 million” as community benefits under s. 37 of the Planning Act. (Curiously, the official notice of public meeting issued by the City Clerk’s office refers to a 65-storey tower with 4-level podium and 725 condo units — but the same 224-meter total height.)

“The proposed intensification is appropriate for this site particularly given its location in the Downtown and Central Waterfront Area, the opportunity to revitalize an underused site in keeping with the direction of the Regeneration Areas, the proximity to a major transit hub of Union Station and the location adjacent to the Gardiner Expressway,” the planners explain in their 52-page report.

The original development application, filed December 22 2011, proposed a square 75-storey point tower that would stand 253.4 meters, including the mechanical penthouse (242.4 metres without). The building would include a podium rising 6 storeys on the west side of the triangular property, and 5 storeys on the east. The tower would contain 783 residences, of which 444 (57%) would be 1-bedroom units. There would be 356 2-bedroom units (32%), and 83 3-bedroom units (11 %). The complex would include 5 levels of underground parking as well as 3 floors of above-ground parking in the podium. There would be 330 vehicle parking spots (292 for residents, and 38 for visitors), along with 785 bicycle parking spaces. The ground floor would have retail space and a lobby accessed from York Street, while podium floors 2 to 4 would be above-ground parking space. The 5th floor would house mechanical systems as well as resident storage facilities, while the 6th and 7th floors would feature indoor and outdoor amenities for the residents.

At an April 3 2012 community consultation meeting, area residents raised concerns about potential traffic, parking and infrastructure problems posed by the development, as well as its height and density and other issues. Meanwhile, at several meetings of the Waterfront Toronto Design Review Panel, the developer was encouraged to consider significant redesigns to both the podium and the tower. “Comments received from the Waterfront Toronto Design Review Panel recommended the applicant to respond to and celebrate the unique shape of the site by reshaping the tower to a flatiron,” city planners noted in their report.

The developer took heed of the feedback and significantly revised its proposal with a redesigned building. Under the latest revision, the tower would rise 65 storeys and contain 725 condos. The podium would be only 4 storeys and would contain street-level retail space; mechanical, storage and guest suites on levels 2 and 3; plus indoor and outdoor amenity space for residents on levels 3 and 4. All parking would be underground, on five levels. And in a major design alteration, the tower was given the signature flatiron shape the design review panel had recommended.

Full details of the revised proposal are available in the planning report, along with a site plan and building illustrations.

Photos of the Ten York location, as well as renderings of the original design, can be viewed in my April 2 2012 report on the project. Below is a copy of the City’s notice about tomorrow’s TEYCC review of the Ten York proposal, along with several artistic illustrations of the new design provided courtesy of Tridel. Dozens more images can be viewed on the Ten York Facebook page as well as in an image gallery on Tridel’s Ten York webpage. 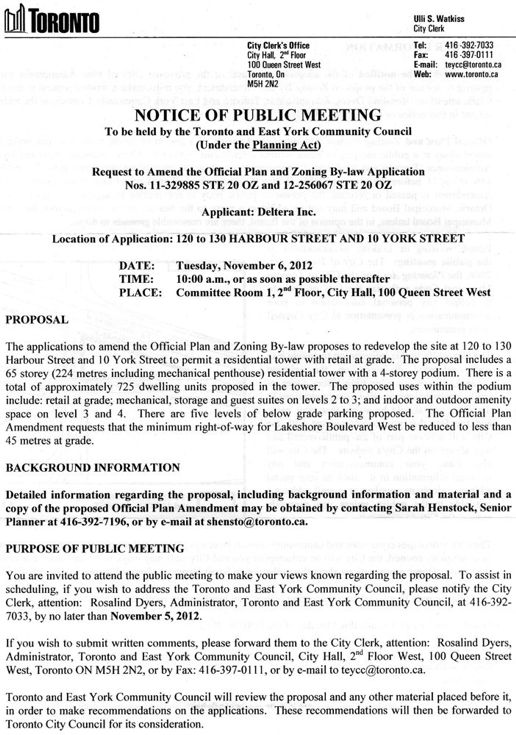 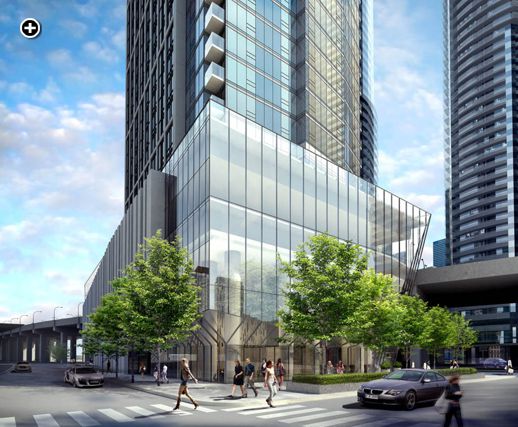 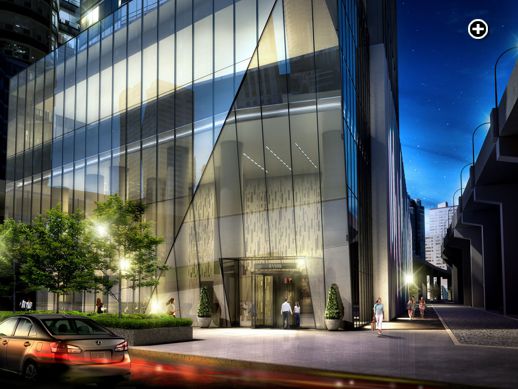 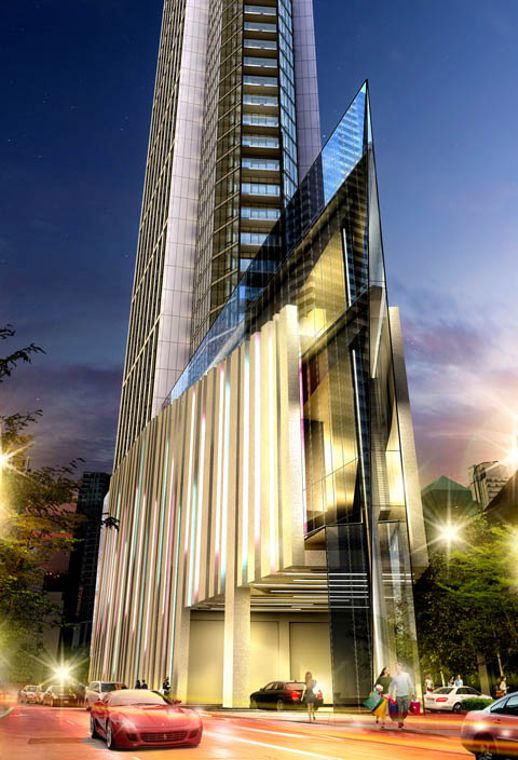 Another evening illustration of the sharply-pointed podium 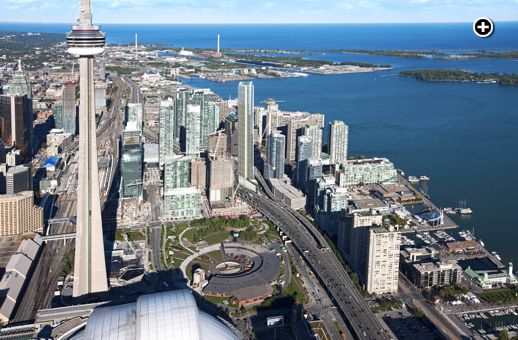 Evening view of the west side of the podium and tower