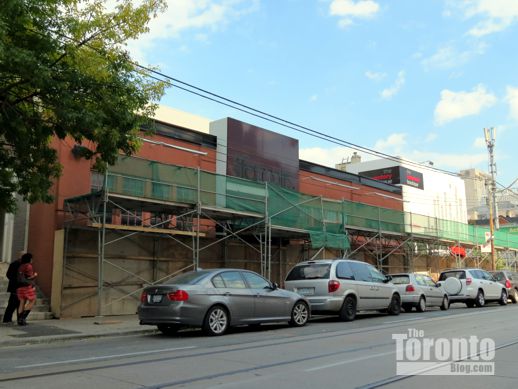 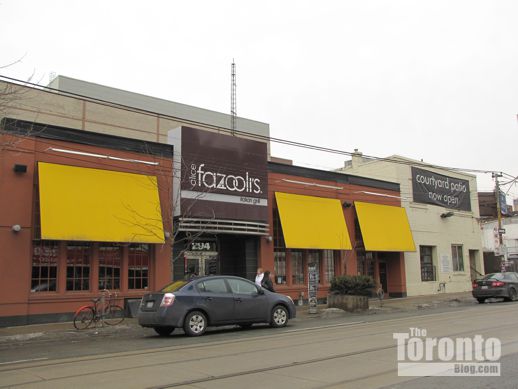 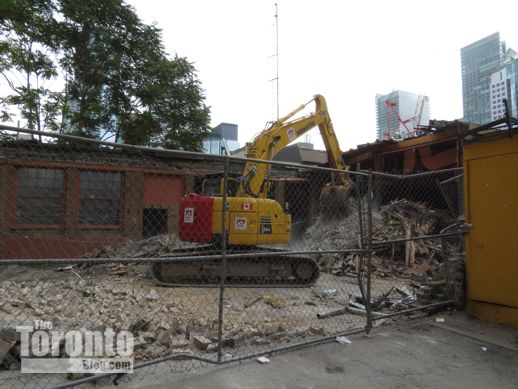 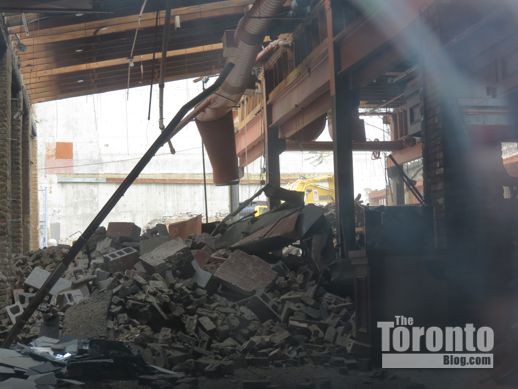 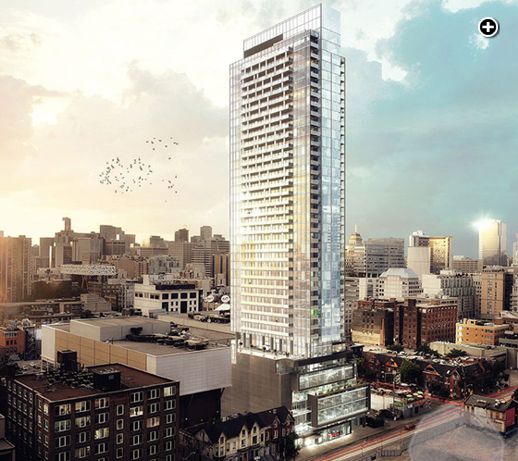 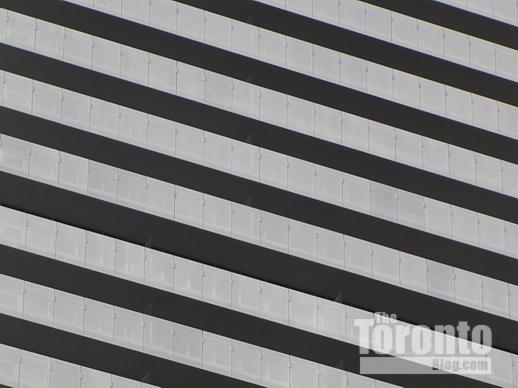 November 29 2010:  Glass balcony panels on the Festival Tower condo highrise in the Entertainment District. Two panels on the tower have broken this summer.

Danger zones: In the wake of media reports that more glass balcony panels have fallen from two different downtown condo towers this week, I’m beginning to wonder if I should start wearing a hard hat whenever I leave my building. Seriously. I’m not worried about walking below my own condo building — all of the balconies on our 30-year-old highrise have metal railings. But almost every day I do walk below new condo towers that have glass balconies, and I recently walked below two of the condo towers that made headlines with balcony glass breakage this week.

On July 19, I crossed a section of Grosvenor Street that, just two days later, was showered with pieces of glass that broke on two separate balconies at the Murano condo tower at 37 Grosvenor Street. This past Monday afternoon I nearly walked up Bay Street past the Murano, but changed my mind two blocks away and took a different route. It wasn’t until an hour or so later that I learned another Murano balcony panel had shattered that very afternoon, spilling glass onto Bay Street — and that yet another panel had broken on the building’s east side just 12 hours earlier. Police cordoned off one northbound lane of Bay Street as a precaution; they already had closed part of Grosvenor Street and nearby St Vincent Lane because of the July 21 incidents. Coincidentally, I had just been walking around the Entertainment District, where I stood below the Festival Tower condo building on John Street to take photos of daredevils doing the CN Tower’s EdgeWalk.  Around 7 p.m. on Tuesday, a panel on one of Festival Tower’s 27th floor balconies shattered, raining broken glass onto John Street. I had not been aware that another balcony panel on the same tower had broken just three weeks before.

Monday’s double-break at Murano occurred mere days after contractors had started removing panels from the tower after City of Toronto building inspectors ordered Murano’s developer, Lanterra Developments, to replace the balcony glass — a multimillion-dollar remediation project that could take several months to complete.

Why has the balcony glass been breaking? Speculation is running rampant in public online discussion forums, with commentators blaming faulty manufacturing, installation, or balcony design, and some others conjecturing that developers or builders may have been “cheaping out” on materials to cut construction costs.  Some blame the recent extreme heat, some say it’s caused by wind, but at this point experts can’t yet pinpoint the precise cause of the breakage at Murano and Festival Tower.

A story posted on the Toronto Star website Tuesday quotes Jim Laughlin, a senior City of Toronto building official, as saying the City ordered Lanterra to replace the Murano balcony glass following the building’s fifth consecutive breakage incident “because we don’t know why this is happening.” The story also quotes Lanterra president Barry Fenton as saying the company has engineers “performing an autopsy of the glass to figure out what happened.” According to Fenton, the glass and railings on the Grosvenor Street Murano condo tower were installed two years ago by a company that is no longer in business. A different company installed the balconies on the adjacent Murano south condo tower at 38 Grenville Street, where no panels have broken.

Meanwhile, the CBC reports that Festival Tower’s developer, The Daniels Corporation, will temporarily install scaffolding below the building as a precautionary measure to protect pedestrians in case any more glass breaks and falls. In the meantime, police have closed John Street to traffic between King and Adelaide Streets. The CBC quotes a Daniels executive as saying the company knows why a panel shattered three weeks ago — apparently a metal railing expanded during the hot temperatures, putting too much pressure on the glass — but doesn’t know what caused Tuesday’s incident.  It’s suspected that something may have struck the glass, the executive said. “The way the balcony has been designed, it’s in accordance with all the codes and practice with construction technique but for some reason we seem to have this problem with the tempered glass is letting go,” Daniels senior vice president Tom Dutton told the CBC.

However, a University of Toronto engineering professor says glass breakage “happens all the time.” “It is known as a delayed spontaneous fracture,” Prof. Doug Perovic told the Toronto Star in a story published on the newspaper’s website Wednesday night. It could be caused either by imperfections that occur in the glass during the manufacturing process, or it could be related to the installation process. In both instances, stressors such as wind and temperature can later increase pressure on the glass, eventually causing it to fracture. Prof. Perovic is one of two engineering experts who discuss the breakage phenomenon in “Shattered glass: what causes panes to fall off,” an in-depth report posted on the CBC website today. [Note: Wednesday’s story in the Star includes a “Falling Glass” summary listing dates on which glass apparently broke on Murano and Festival Tower. It mentions June 17 as the date for one Murano breakage, an event I reported in my June 21 2011 post. In addition, the Star says Dec. 1 2010 was when the “first known pane of glass explodes and falls from the north tower of 37 Grosvenor Street”; however, in a story published on Sept. 18 2010, the Star itself reported on two breakage incidents that occurred one week apart last September. I reported on the December occurrence in a January 18 2011 post.]

It now appears that at least one more panel has broken on Festival Tower so far this year. A story in today’s Star quotes a Festival Tower resident, Omar Jabri, describing how a pane fell off his 16th floor balcony back in May. Jabri actually happened to be standing at the corner of King & John Streets on Tuesday evening when the panel on the 27th floor shattered; he told the Star he saw the glass fall onto John Street. I haven’t been able to get down to the area to take photos, but was surprised when I saw pictures in the Star and other media showing a Festival Tower balcony with a missing panel. In February, I snapped a photo of a Festival Tower balcony missing a panel, also on the east (John Street) side of the building. The pane was missing from the exact same part of the balcony railing as the pane that fell from the tower this week (see photo, below). Could that be just a curious coincidence?

Today I walked past the Murano condos to see how the glass removal project is progressing. Most of the balcony panels on the north side of the Grosvenor Street building have been removed, with four and a half floors still to go as well as several vertical rows of panes, rising about two-thirds of the way up the tower, for balconies near the northeast corner. No glass has been removed from the south side of the tower yet.  Part of Grosvenor Street and St Vincent Lane are still closed to traffic, as is the right-hand northbound lane of Bay Street between Grenville Street and Grosvenor. The Bay Street sidewalk alongside the Murano complex is completely closed to pedestrians, and police officers are stationed at both ends of the sidewalk to ensure people detour around the site.

Here’s hoping that Lanterra’s glass “autopsy” and the Daniels investigations are able to quickly pinpoint the cause of the breakage — and determine an effective solution. I’d like to be able to walk our downtown streets without having to wear protective headgear, and I’m sure most Torontonians feel the same way.

Below are recent photos of the balcony removal work at the Murano condo on Grosvenor Street, along with some photos I’ve shot in the past showing the glass balcony panes on Festival Tower. 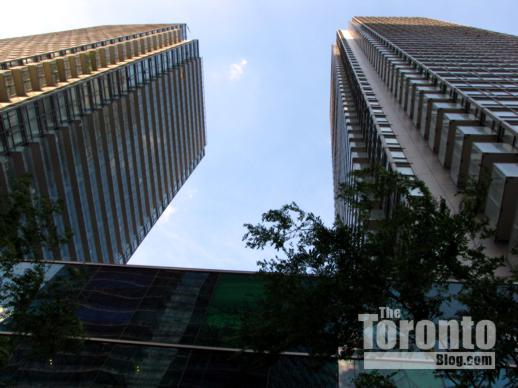 July 21 2011: The Murano north tower on Grosvenor Street, left, has suffered about eight incidents of balcony glass breakage this year. 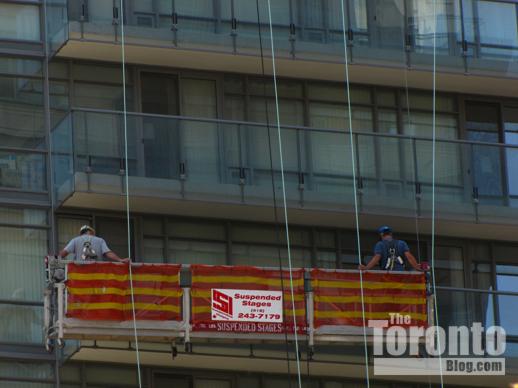 July 24 2011: A crew on a swing stage inspects the Murano north condo tower as work begins to remove all balcony glass and railings from the building. 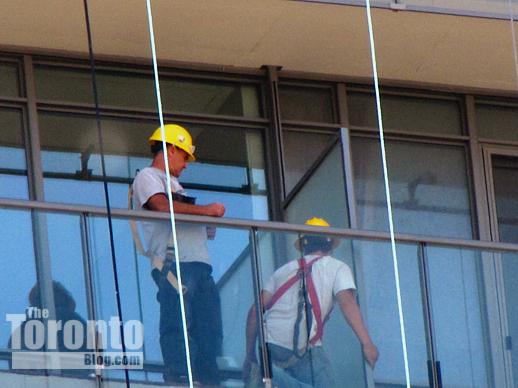 July 24 2011: Workers remove a glass partition from between two balconies on the north side of the Grosvenor Street Murano tower 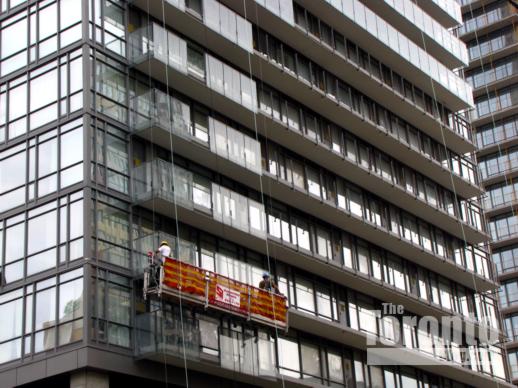 July 27 2011: Crews remove balcony glass from the Murano north condo tower. The dismantling of all of the building’s balconies is expected to finish next week. 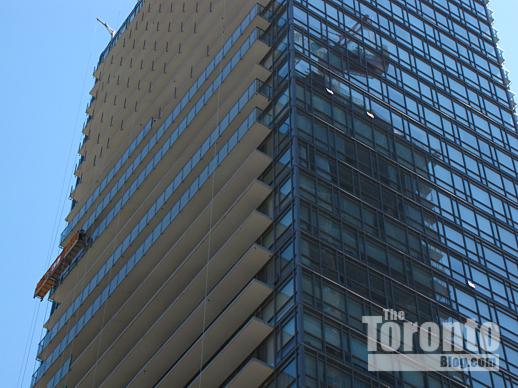 August 4 2011: Balcony glass removal progress on the tower’s north side 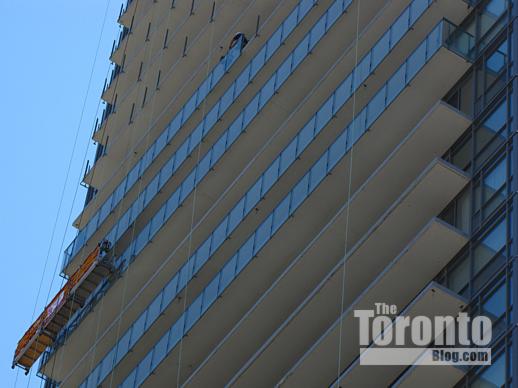 August 4 2011: Panels still must be removed from four and a half full floors, along with a vertical row of balconies near the northeast corner of the building 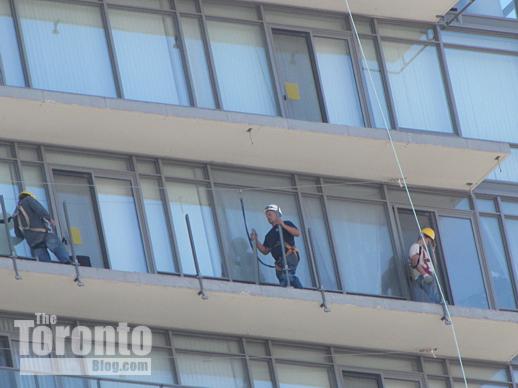 August 4 2011: A work crew removes balcony panels and railings on the north tower. The yellow signs posted on the balcony doors advise residents that they cannot use their balconies during the city-ordered remediation project. 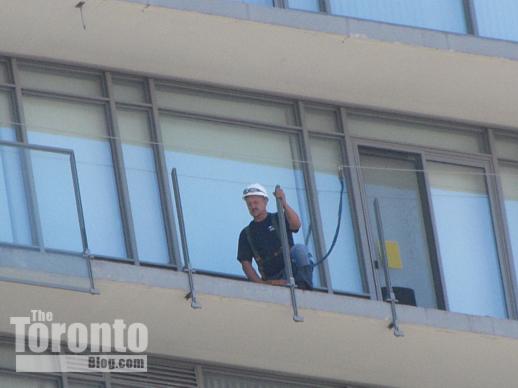 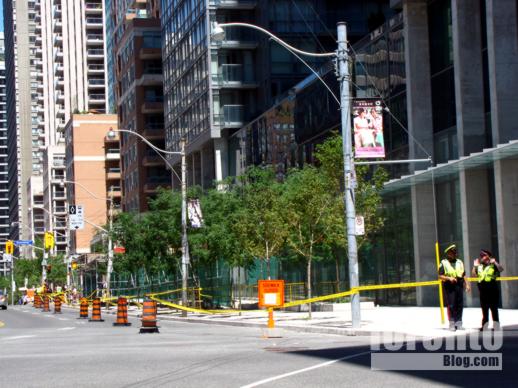 August 4 2011: The right-hand northbound lane of Bay Street is closed between Grenville and Grosvenor Streets, as is the sidewalk. I counted seven Toronto police officers enforcing the street and sidewalk closures at lunch time today. 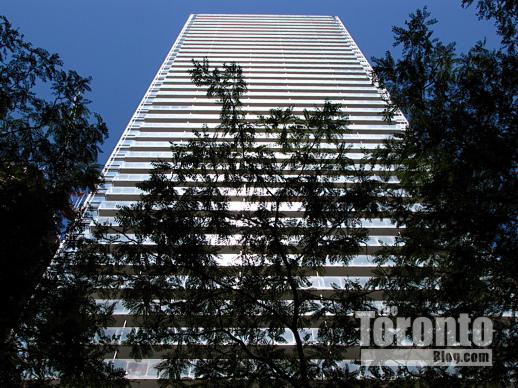 July 21 2011: The Murano south condo tower at 38 Grenville Street has not experienced any balcony panel breakage 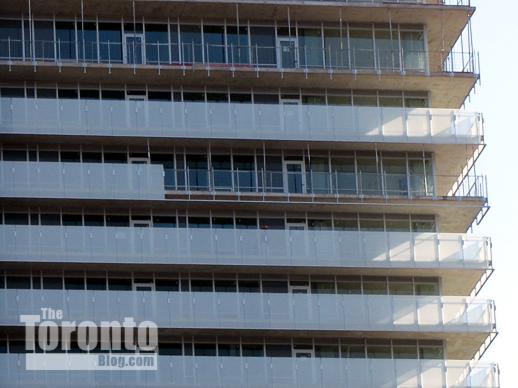 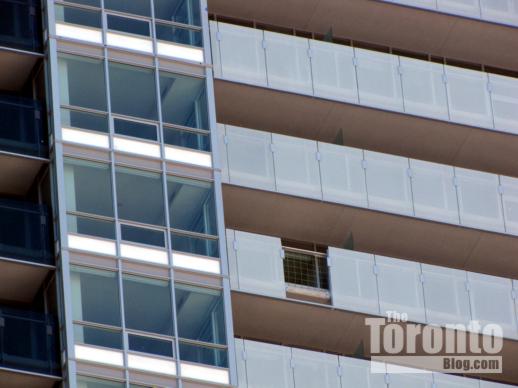 February 3 2011: A Festival Tower balcony was missing one of its glass panels last winter. There had been no reports of glass breakage at the time. 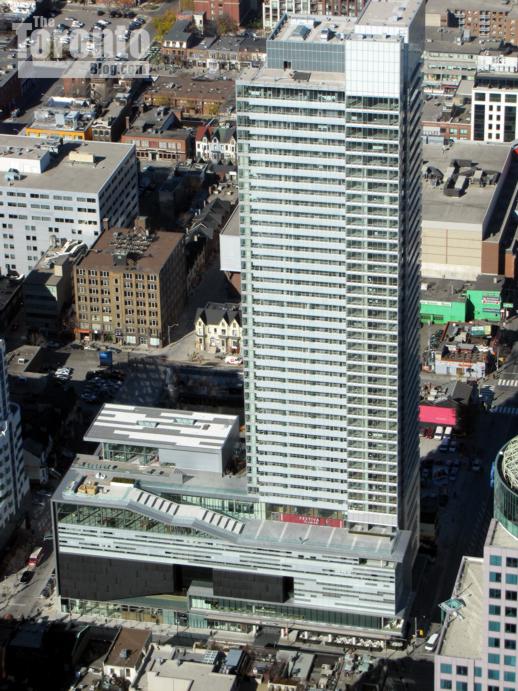