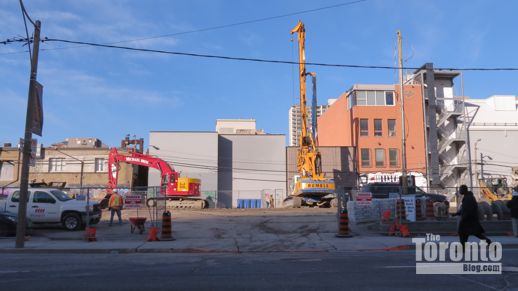 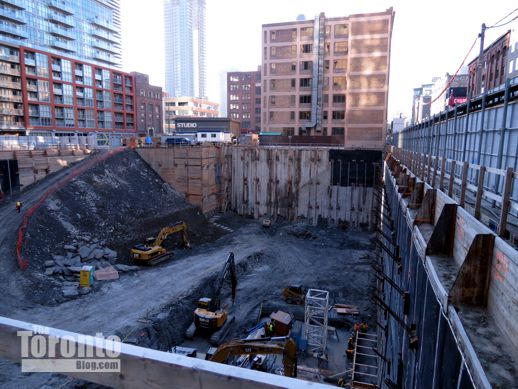 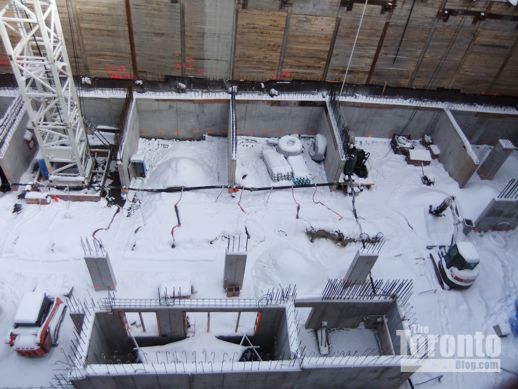 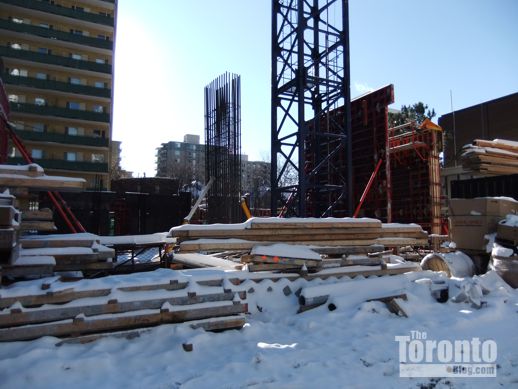 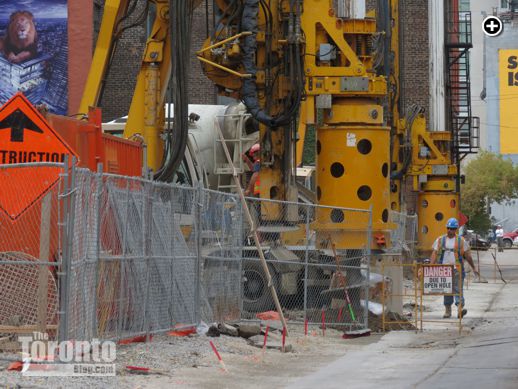 October 1 2012: A construction worker walks past foundation drilling machines on The Mercer condo tower site. Click on the photo to view a larger image. 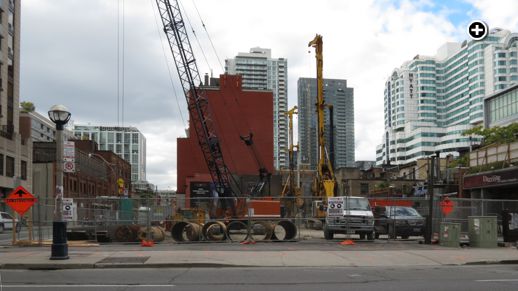 October 1 2012: Tall shoring machines on The Mercer condominium tower site. This view is from John Street, looking west. Click on the photo to view a larger-size image. 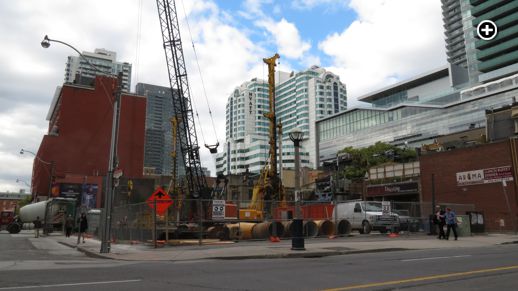 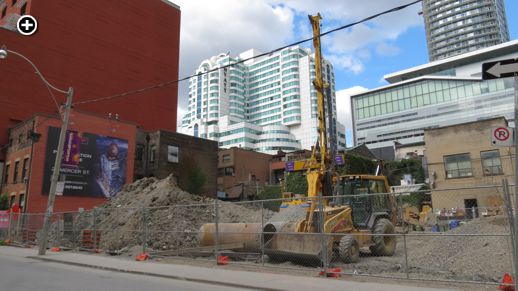 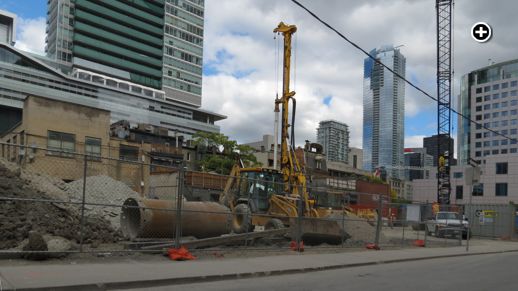 … and another Mercer street view, this time looking northeast 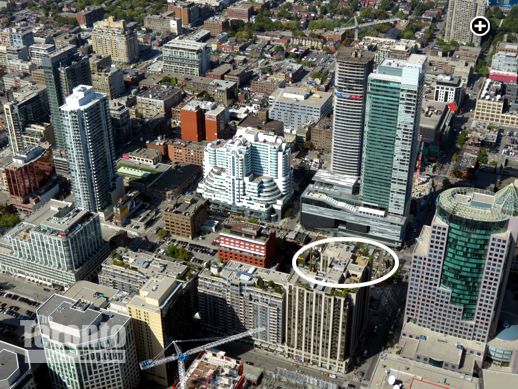 September 25 2012: The white circle indicates the The Mercer’s approximate location in this CN Tower view of the Entertainment District. Six more condo towers have been proposed just for the one block area to The Mercer’s west, while double that number are either already under construction or have been proposed for its immediate vicinity.

Shoring the site: The area is formally known as the Entertainment District, but as intensification of the bustling west downtown neighbourhood continues its breakneck pace, Torontonians might soon start calling it the Condominium Construction District. It seems residents and tourists can’t stroll more than a block without encountering drilling, dust, dump trucks and the constant cacophony of construction work — or development proposal signs heralding more highrises still to come.

The Mercer, a 33-storey tower set to rise on the northwest corner of John and Mercer Streets, is the latest condominium project adding to the incessant daytime din of building activity that permeates the neighbourhood. 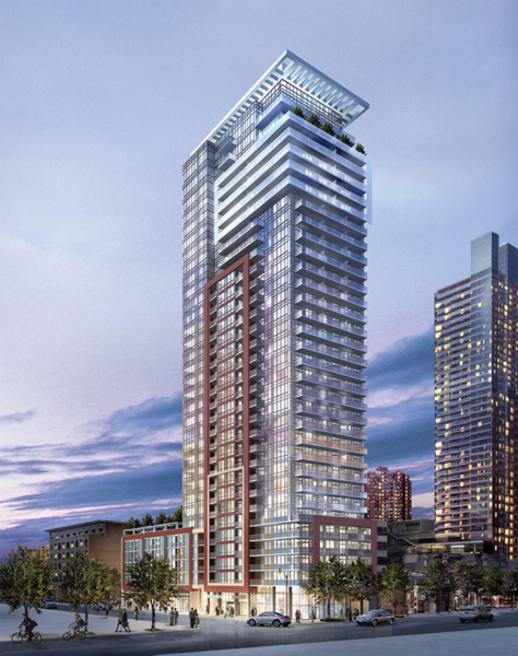 Architectural rendering of The Mercer tower, from the condo website

Ad vantage?: For months, I have seen ads for The Mercer practically every other time I’ve passed a TV tuned to the CP24 news and informational channel. I’ve heard spots for The Mercer almost every time I’ve turned on the radio, too. The ads always catch my attention, and it’s not just because they feature three long-legged female models imitating the Beatles crossing Abbey Road while a singer croons “Mercer Mercer Me” in a retooled version of the Marvin Gaye hit record. They stand out because I never see or hear TV and radio ads for any other condo projects. I find plenty of condo ads in local newspapers and magazines, of course, and receive condo brochures and postcards in the mail regularly, but I can’t think of a single other downtown building project that has advertised so heavily on radio and TV.  (If there have been others, I’ve missed them.)

With The Mercer holding its grand opening tomorrow morning, I’ll be keen to see if the ads draw lineups of eager buyers outside their sales office at the corner of John & Mercer Streets. One of many condo projects either recently launched or being proposed for the rapidly-growing Entertainment District, The Mercer will be a 33-storey condo tower (down from the 38 floors originally planned) with 299 units, street-level retail, and four underground parking levels.

The building will rise on a site currently occupied by two parking lots and a small four-storey brown brick office building on Mercer Street, and will become a new neighbour to the trendy Le Germain boutique hotel.

The Mercer is designed by architect Brian Brisbin of Toronto’s BBB Architects. Full project details are available on The Mercer’s website.

Below are some recent photos of the condo project’s location, along with a website rendering of the building’s frontage on Mercer Street. 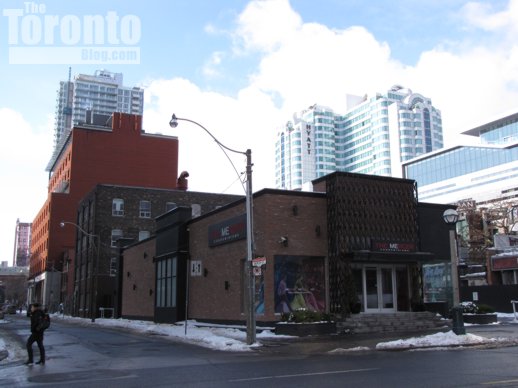 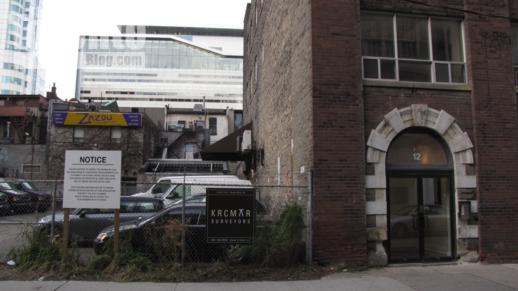 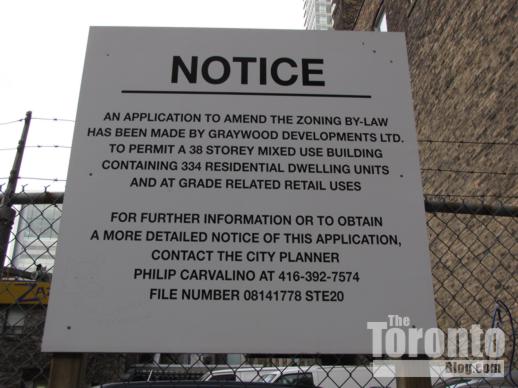 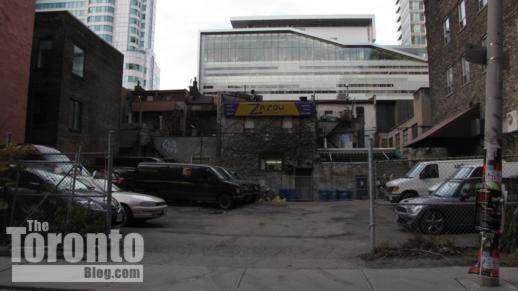 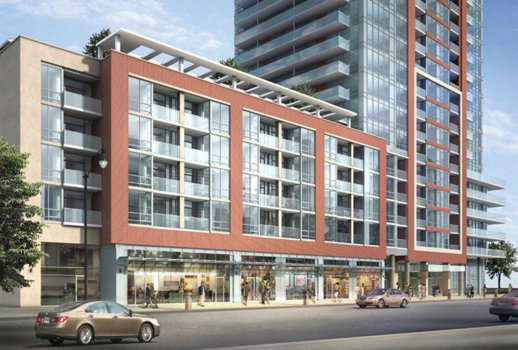 Rendering of The Mercer Condos frontage on Mercer Street